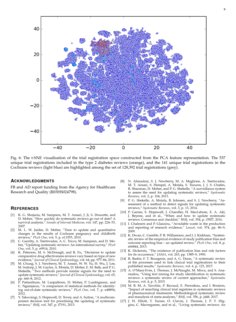 Systematic reviews of clinical trials are at the foundation of evidence-based medicine and should represent comprehensive, high quality, and up to date syntheses of trial evidence. With the rapid growth of the scientific literature, identifying relevant evidence and keeping systematic reviews up to date is increasingly difficult. Studies examining the timing of systematic reviews suggest that reviews are updated on average every 5.5 years, though a substantial proportion should be updated within 2 years [1, 2, 3, 4]

A number of semi-automated methods have been proposed to identify relevant trials for inclusion in systematic reviews and improve the efficiency of the searching and screening processes [15, 20, 21]. The methods typically use the words or concepts included in the text of published articles to find similarities that are then used to distinguish relevant from irrelevant articles. Some work has also been done to directly extract information on populations, interventions, comparators, and outcomes [22, 23]

, which can then be used to match search queries. Several approaches have included the use of active learning

, while others have examined representations that use neural network based vector space models

[26]. Far less work has been performed on identifying trials from the information stored in clinical trial registries or on linking clinical trial registries to bibliographic databases [14, 27, 28, 29]. However, some methods have shown that it is possible to identify meaningful clusters of similar trials within registries [30, 31, 32], especially in relation to populations [33], and ClinicalTrials.gov data has been used in predicting black box warnings [34].

Matrix factorisation has the potential to support the identification of relevant trials for inclusion in systematic reviews. The approach has a long history of use in addressing problems in link prediction [35, 36, 37], for example in building systems that recommend books, music, or new social connections to users. This process, commonly referred to as “the item prediction problem”, aims to predict the presence or absence of links between the nodes of a graph where the vertices represent users and items, and edges that connect vertices are weighted according to preference scores. Matrix factorisation produces a mapping between users and items into a low-dimensional representation (latent factors) to model the user-item affinity in vector space.

Past work on the use of matrix factorisation for collaborative filtering focused on increasing prediction accuracy by including neighbourhood information [38]. Later, Koren et al. [39] proposed SVD++, a matrix factorisation approach that unified neighbourhood and latent factors. Guo et al. [40] proposed TrustSVD, an extension of SVD++ that incorporates social trust information to help mitigate data sparsity and the cold start problem. TrustSVD includes factorisation of two matrices that share a same latent space—meaning a matrix of user-item preference scores and another matrix that defines trust information among users.

Our proposed matrix factorisation approach shares structural similarity with TrustSVD but applies different regularization methods to adapt to weighted links between systematic reviews and trial registrations. To the best of our knowledge, this is the first study to address the problem of recommending trial registrations for systematic review updates using matrix factorisation with a shared latent space.

We searched PubMed and Embase for systematic reviews of drugs used to treat type 2 diabetes. The final search was performed on 26 March 2017, using a search strategy that included terms for type 2 diabetes, type 2 diabetes interventions, and publication type information. Systematic reviews were considered for inclusion in the experiments if they were focused on populations with type 2 diabetes and included at least one meta-analysis (Figure 1). Reviews that summarised or synthesised meta-analyses from other reviews were excluded, as were reviews that did not include full details of a search strategy and did not include at least one meta-analysis of a safety or efficacy outcome. Reviews that also included other populations were included only if they had sub-group analyses that were specific to type 2 diabetes.

We accessed ClinicalTrials.gov on May 16, 2017 to create a static local version of information from 128,392 completed trials in order to produce consistent results across all experiments. Information on the brief and official titles, detailed description, inclusion criteria, and intervention names were extracted for use in the experiments.

To test the methods in a general scenario, we additionally identified 17 systematic reviews that were published in the Cochrane Database of Systematic Reviews on any topic. To be included in the experiments, they must have either had an update published with a new search performed before 25 April 2017, or have listed at least three ongoing studies in ClinicalTrials.gov in the published review. We then used the set of included trials as the training set, and the new trials added to the update (or listed as ongoing trials) as the test set. There were 72 unique trials in the original reviews and 69 unique trials in the updates and lists of ongoing relevant trials. The number of trial registrations per systematic review was between 1 and 14 in the original versions and between 1 and 13 in the updates.

We used Principal Component Analysis (PCA) and Latent Dirichlet Allocation (LDA) to reduce the dimensionality of the feature spaces. The PCA technique transforms data into a lower-dimensional space based on several linearly uncorrelated variables by maximising the variance. We used the implementation of incremental PCA from scikit-learn with its default settings, and tested it with 20, 50, 100, 200, 300, and 400 components on the tf-idf and word frequency vector representations. The LDA method is a technique that was first introduced to model topics across a set of documents

, the loss function that we need to minimise is as follows

where ||⋅|| represents the Frobenius norm, λ is the regularization parameter, ruj is the entry of matrix R in row u and column j, and ^ruj=puq⊤j. pu and qj represent K-dimensional vector of trial registration u and its feature j respectively.

Because matrix is shared in Equation 3.3 and 3.3, the new objective function to minimise is then given as follows:

We performed gradient descent on pu, qj and wv based on the final loss function in Equation 3 described in the following equations:

We used 5,000 as our maximum number of iterations for the learning process. We calculated root-mean-square error (RMSE) in each iteration during the learning process and returned the results from the learning process when the RMSE was the lowest. We implemented our matrix factorisation approach in Cython. We performed the experiments with λ=0.001, λt=0.01, and the number of latent factors was set to 5, 10, 20, 30, 40, and 50. The source code of the proposed matrix factorisation approach has been made available via a repository (https://github.com/dsurian/matfac).

In each experiment and for each systematic review we produced a ranking for all 128,392 completed ClinicalTrials.gov registrations, and identified where the test links for that systematic review were found in the rankings. For each experiment, the aim was to rank the links from the test set as high as possible within the full set of candidates. The links corresponding to the training set were not included in the ranking and did not contribute to the performance measures.

We evaluated the proportion of links in the test set that were included in the first 100 candidates in each of the ranked lists (recall@100), and produced a function for the general version of the same measure (recall@N). The recall@N function can be used to determine the number of candidates that need to be examined per systematic review to identify a given proportion of relevant trial registrations. We also included the work saved over sampling (WSS) [20] which shows the percent reduction in screening process to retrieve the relevant trials. We measured WSS at recall 95% (WSS@95%) by calculating the proportion of registrations that did not need to be screened after screening the ranked candidate registrations and identifying at least 95% of the registrations in the test set.

To evaluate the matrix factorisation and document similarity approaches against an appropriate baseline, we undertook a manual search of ClinicalTrials.gov using the Advanced Search function, which ranks trials based on a relevance score. One investigator (AD) replicated the search strategies of the reviews in the format of population, intervention, and outcome (as required), and the returned search results were used as a ranked set. These results were evaluated using the same outcome measures.

We identified 40,049 unique words in the vocabulary extracted from the processed text of trial registrations. For the binary and word frequency vector representations, the number of features that were shared between training and test sets was 2,367, comprising 5.9% of the 40,049 words (Figure 4).

4.1 Tests in a general scenario

The performance of the matrix factorisation method was lower in the general scenario than in the type 2 diabetes examples, and lower than the document similarity methods. To investigate possible reasons, we looked at how the results varied with the number of training examples in the type 2 diabetes systematic reviews (Figure 6). The results indicate that the document similarity method degrades as the number of examples decreases, while the matrix factorisation tends to improve or maintain its performance as the number of training examples increases (see Discussion and Figure 7).

This is the first study to evaluate matrix factorisation for the purpose of finding new relevant trials from ClinicalTrials.gov for systematic review updates. In terms of manual screening requirements, our findings show that the performance of our methods compares favourably to similar methods that operate over bibliographic databases. While the results of studies testing semi-automated screening of published articles for inclusion in systematic reviews are not directly comparable, standard tools in this area use active learning to avoid screening 80% of articles to reach 95% recall [20, 25, 26]. In our experiments, we were able to reach 95% recall after screening approximately 700 candidates (avoiding 99.5% of the candidate registrations).

In another recent example, investigators used generalized linear models and gradient boosting machines on 3 systematic reviews, and needed to screen between 192 and 2,112 articles to reach 96% recall

As policies and practice around the prospective registration and structured results reporting of clinical trials continue to expand, use of trial registries in the production of systematic reviews will likely increase. An important benefit will include earlier identification of when the evidence summarised in a systematic review has become out of date. Tools that automate the identification of relevant trials or dramatically reduce the human workload required in trial selection, could be applied to provide rapid estimates of how much of the available evidence is covered in a published systematic review, thus signalling the need for an update. If an update cannot be produced in a specified time, the systematic review could be flagged as potentially out of date with reference to the new research, in order to inform clinicians and consumers using systematic reviews in their care decisions.

The results of the experiments suggest that the document similarity and matrix factorisation approaches can replace the need to undertake a search of trial registrations as well as improve the efficiency of screening for relevant trials. This suggests that the two could be used as complementary solutions as part of a pipeline of methods for automatically identifying trials that may be relevant to the update of a systematic review, or used to support updates of living systematic reviews [17].

The study has several limitations. First, the set of systematic reviews used in the training and validation of the methods are related to drug interventions in type 2 diabetes–an area with a substantial number of new drugs and a large volume of new trials. This means that the results may not generalise to clinical application domains with fewer trials available [48], or where trial descriptions are more heterogeneous. Second, our results may underestimate the performance of both the baseline document similarity approach and the matrix factorisation approach because we only used known links to test the performance, and other highly–ranked candidates–especially those completed since the systematic reviews were published–may also have been relevant but not included in the systematic review.

FB and AD report funding from the Agency for Healthcare Research and Quality (R03HS024798).

The search strategy for identifying systematic reviews of type 2 diabetes for PubMed (and translated to equivalent terms for Embase):