A Separation of γ and b via Thue–Morse Words 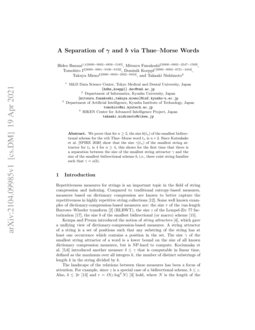 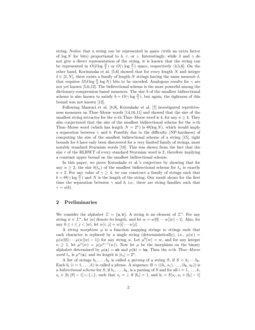 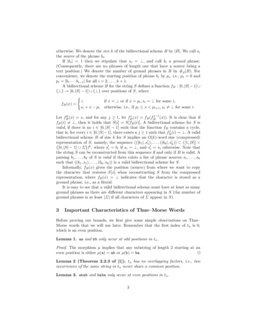 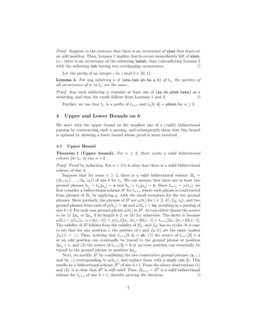 Repetitiveness measures for strings is an important topic in the field of string compression and indexing. Compared to traditional entropy-based measures, measures based on dictionary compression are known to better capture the repetitiveness in highly repetitive string collections [12]. Some well known examples of dictionary-compression-based measures are: the size r of the run-length Burrows–Wheeler transform [2] (RLBWT), the size z of the Lempel-Ziv 77 factorization [17], the size b of the smallest bidirectional (or macro) scheme [15].

Kempa and Prezza introduced the notion of string attractors [4], which gave a unifying view of dictionary-compression-based measures. A string attractor of a string is a set of positions such that any substring of the string has at least one occurrence which contains a position in the set. The size γ of the smallest string attractor of a word is a lower bound on the size of all known dictionary compression measures, but is NP-hard to compute. Kociumaka et al. [5, 6] introduced another measure δ≤γ that is computable in linear time, defined as the maximum over all integers k, the number of distinct substrings of length k in the string divided by k.

The landscape of the relations between these measures has been a focus of attention. For example, since z is a special case of a bidirectional scheme, b≤z. Also, b≤2r [13] and r=O(zlog2N) [3] hold, where N is the length of the string. Notice that a string can be represented in space (with an extra factor of logN for bits) proportional to b, r, or z. Interestingly, while δ and γ do not give a direct representation of the string, it is known that the string can be represented in O(δlogNδ) or O(γlogNγ) space, respectively [4, 5, 6]. On the other hand, Kociumaka et al. [5, 6] showed that for every length N and integer δ∈[2,N], there exists a family of length-N strings having the same measure δ, that requires Ω(δlogNδlogN) bits to be encoded. Analogous results for γ are not yet known [5, 6, 12]. The bidirectional scheme is the most powerful among the dictionary-compression-based measures. The size b of the smallest bidirectional scheme is also known to satisfy b=O(γlogNγ), but again, the tightness of this bound was not known [12].

In this paper, we prove Kutsukake et al.’s conjecture by showing that for any n≥2, the size b(tn) of the smallest bidirectional scheme for tn is exactly n+2. For any value of γ≥4, we can construct a family of strings such that b=Θ(γlogNγ) and N is the length of the string. Our result shows for the first time the separation between γ and b, i.e., there are string families such that γ=o(b).

If |bi|=1 then we stipulate that si=⊥, and call bi a ground phrase. (Consequently, there are no phrases of length one that have a source being a text position.) We denote the number of ground phrases in B by #g(B). For convenience, we denote the starting position of phrase bi by pi, i.e., p1=0 and pi=|b1⋯bi−1| for all i=2,…,k+1.

Informally, fB(x) gives the position (source) from where we want to copy the character that restores S[x] when reconstructing S from the compressed representation, where fB(x)=⊥ indicates that the character is stored as a ground phrase, i.e., as a literal.

Before proving our bounds, we first give some simple observations on Thue–Morse words that we will use later. Remember that the first index of tn is 0, which is an even position.

only occur at odd positions in

The morphism μ implies that any substring of length 2 starting at an even position is either μ(a)=ab or μ(b)=ba. ∎

tn has no overlapping factors, i.e., two occurrences of the same string in tn never share a common position.

abab and baba only occur at even positions in tn.

For any substring of tn, the parities of all occurrences of w in tn are the same.

Any such substring w contains at least one of {aa,bb,abab,baba} as a substring, and thus the result follows from Lemmas 1 and 3.∎

4 Upper and Lower Bounds on b

We start with the upper bound on the smallest size of a (valid) bidirectional parsing by constructing such a parsing, and subsequently show that this bound is optimal by showing a lower bound whose proof is more involved.

For n≥2, there exists a valid bidirectional scheme for tn of size n+2.

Proof by induction. For n=2 it is clear that there is a valid bidirectional scheme of size 4.

Next, we modify B′ by combining the two consecutive ground phrases (a,⊥) and (b,⊥) corresponding to μ(bia), and replace them with a single (ab,3). This results in a bidirectional scheme B′′ of size k+1. From the above observations (1) and (2), it is clear that B′′ is still valid. Thus, Bn+1=B′′ is a valid bidirectional scheme for tn+1 of size k+1, thereby proving the theorem. ∎

For n≥2, the smallest valid bidirectional scheme for tn has size n+2.

Since the size of the smallest bidirectional scheme for t2, t3, t4 can be confirmed to be respectively 4,5,6 by computer analysis, this with Lemma 5 implies Theorem 4.2.

The operation is done analogously and symmetrically for any length-1 ground phrase (a or b) that may occur at an even or odd position. We describe in detail the case for a ground phrase with character a that occurs at some odd position 2i+1.

For a consecutive pair of positions 2i,2i+1, we call one a partner of the other. Let ib=2i be the partner position of the length-1 ground phrase a, i.e., tn[ib..ib+1]=ba. The idea is to (re)move the phrase boundary that separates partner positions so that the ground phrase disappears. Since we are considering the case where the ground phrase is at an odd position, we extend the phrase (bi,si) containing position ib by one character, so that it includes the length-1 ground phrase tn[ib+1]=a, thereby eliminating it. If possible, we would like to keep the source of the extended phrase the same, i.e., change (bi,si) to (bia,si), or equivalently, change fBn(ib+1)=⊥ to fBn(ib+1)=si+|bi|. Note that if the parity of fBn(ib) is equal to that of ib, this is always possible (i.e., tn[fBn(ib)+1]=a always holds). However, it may be that the position ib+1 gets involved in a cycle, due to this change. Notice that since we started from a valid (relaxed) bidirectional scheme, it is guaranteed that ib is not involved in a cycle, i.e., fjBn(ib)≠ib for any j≥1. Therefore, we further modify the phrase boundaries, if necessary, to ensure that the source of tn[ib+1]=a will belong in the same phrase as the source of tn[ib]=b. This is repeated until we are sure that all these changes made to eliminate the original length-1 ground phrase a do not introduce any cycles in the final bidirectional scheme. In other words, we ensure, for some sufficiently large j′, fjBn(ib+1)=fjBn(ib)+1 for all 1≤j≤j′. Then, from the acyclicity of position ib, the acyclicity of position ib+1 follows.

There are six cases where the process terminates, as shown in Figure 1 (Case 3 is further divided into two sub-cases). As noted above, as long as the parity of fjBn(ib) is the same as that of fj−1Bn(ib), the character of fjBn(ib)’s partner is always a, and we can ensure that fj−1Bn(ib) and fj−1Bn(ib+1) are in the same phrase by only (possibly) setting fjBn(ib+1)=fjBn(ib)+1. Thus, we consider the cases where j′≥1 is the smallest integer such that the parities of fj′−1Bn(ib) and fj′Bn(ib) differ, in which case, Lemma 4 implies that fj′−1Bn(ib) is contained in a phrase in {aba,bab,ab,ba,b}. Each of the six cases corresponds to a distinct occurrence of b in the strings of this set. We show that in each case, we can modify the phrases so that both fj′−1Bn(ib) and fj′−1Bn(ib+1) are in the same length-2 phrase, i.e., a relaxed ground phrase, and be sure that ib+1 will not be involved in a cycle in the final bidirectional scheme. The details of each case are described in Figure 1.

Although Cases 1, 2, 4 introduce a new length-1 ground phrase, the number of phrase boundaries that separate partner positions always decreases at the starting point, and never increases. Therefore the whole process terminates at some point, at which point, all length-1 ground phrases have been eliminated.

In this step, we eliminate all remaining phrases with odd lengths. Since there are no more length-1 ground phrases, we first focus on removing phrases aba and bab of length 3. Below, we describe the operation for removing a phrase aba that starts at an odd position. The other cases are analogous or symmetric.

Starting with an occurrence of phrase aba that starts at an odd position ib+1, we know that this phrase is preceded by b. We move the phrase boundary that separates partner positions, so that the length-3 phrase shrinks to a length-2 phrase starting at an even position, i.e., a relaxed ground phrase, in this case, by expanding the phrase to its left. Since we have changed the source of the a at position ib+1, we ensure that for some sufficiently large j′, fjBn(ib+1)=fjBn(ib)+1 for all 1≤j≤j′, as we did for the elimination of length-1 ground phrases, so that ib+1 is not involved in a cycle.

There are five cases where the process terminates, as shown in Figure 2. As noted previously, as long as the parity of fjBn(ib) is the same as that of fj−1Bn(ib), then the character of fjBn(ib)’s partner is always a, and we can ensure that fj−1Bn(ib) and fj−1Bn(ib+1) are in the same phrase by only (possibly) setting fjBn(ib+1)=fjBn(ib)+1. Thus, we consider the cases where j′≥1 is the smallest integer such that the parities of fj′−1Bn(ib) and fj′Bn(ib) differ, in which case, Lemma 4 and the previous step implies that fj′−1Bn(ib) is contained in a phrase in {aba,bab,ab,ba}. Each of the five cases corresponds to a distinct occurrence of b in strings of this set. The details of each case are described in Figure 2.

After eliminating all phrases aba and bab of length 3, all remaining phrases are either of length 2 or do not belong to the set {aba,bab,ab,ba,a,b}. Therefore, we can move all phrase boundaries that separate partner positions to the right (or all of them to the left) and update the sources accordingly without introducing cycles, since length-2 phrases starting at odd positions become relaxed ground phrases, and the occurrences of each of the other phrases have the same parity due to Lemma 4. Thus, we now have a valid bidirectional scheme B′n where all phrases are of even length, and length-2 phrases are considered to be relaxed ground phrases.

4.2.3 Analysis of the Number of Phrases

We have shown that for any n≥2, the size b(tn) of the smallest bidirectional scheme for the n-th Thue–Morse word tn is exactly n+2. From the result that the smallest string attractor of tn is 4 for any n≥4 [7] and that |tn|=2n, we have shown that Thue–Morse words are an example of a family of strings {Sn}n≥1 in which each string Sn has b(Sn)=Θ(γ(Sn)log|Sn|γ(Sn)) as the size of its smallest bidirectional parsing, where γ(Sn) is the size of its smallest string attractor, and |Sn|=2n is its length. Note that we can generalize this to hold for any γ≥4: Given a γ≥4, concatenate k=⌊γ/4⌋ copies of tn, each using distinct letters from a different binary alphabet. Finally, we add (γmod4) more distinct characters to make the smallest string attractor of the resulting string exactly γ. We thus can obtain a string of length N=k⋅2n+O(1) with b=Θ(kn)=Θ(γlogNγ).

Our result shows for the first time the separation between γ and b, i.e., there are string families such that γ=o(b). Whether this can be achieved by a family of binary strings is not yet known. Although it is still open whether O(γlogN) bits is enough to represent any string of length N, it seems not possible by dictionary compression, i.e., copy/pasting within the string.