Throughout the world, breast cancer is one of the leading causes of female death. Recently, deep learning methods are developed to automatically grade breast cancer of histological slides. However, the performance of existing deep learning models is limited due to the lack of large annotated biomedical datasets. One promising way to relieve the annotating burden is to leverage the unannotated datasets to enhance the trained model. In this paper, we first apply active learning method in breast cancer grading, and propose a semi-supervised framework based on expectation maximization (EM) model. The proposed EM approach is based on the collaborative filtering among the annotated and unannotated datasets. The collaborative filtering method effectively extracts useful and credible datasets from the unannotated images. Results of pixel-wise prediction of whole-slide images (WSI) demonstrate that the proposed method not only outperforms state-of-art methods, but also significantly reduces the annotation cost by over 70 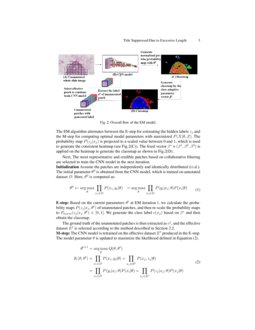 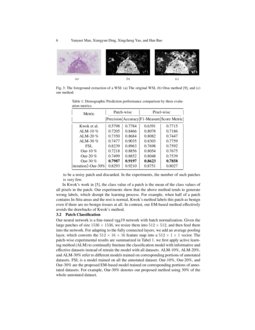 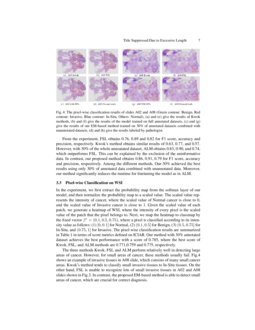 Breast cancer is the most commonly diagnosed cancer for women, which is estimated to account for 30% of new cancer diagnoses and 15% of cancer deaths in the United States

[11]. Early and precise diagnosis of breast cancer is crucial to improve the survival rate of patients [10]

. Microscopic examination of stained tissue sections is among the most accurate methods of diagnosing and classifying cancer. The cancer effects can be observed in WSIs in the cellular and tissue levels.

Fig.1 shows an example of the cancer effects, which are classified into four categories, i.e., invasive cancer, In-Situ cancer, Benign, and normal. Recently, many computer-aided systems utilize deep learning models to improve the classification consistency and accuracy [5, 13, 2, 5]. However, robust deep learning models require large annotated datasets, which are costly to produce especially for medical images. Recent studies integrate active learning with deep learning, which utilize unannotated data to improve the performance of deep learning model [3, 7, 12, 6]. Yang et al. applied active learning method on fully convolutional network (FCN) to select the most representative and uncertain areas for annotation [14]. One of the drawbacks is that the FCN cannot be applied to high resolution images, such as WSIs. And it is difficult to acquire iterative annotation on the high-resolution WSIs. Generative Adversarial Network (GAN) is widely applied to generate realistic images, which overcomes the limitations of small training datasets. Mahapatra et al. applies conditional generative adversarial networks (cGANs) to generate informative and realistic chest X-ray images, which enlarge the training datasets [8]. However, GAN generates artifacts on the original images. The artifacts introduced to the images, although subtle, could substantially alter the features of cells and tissues, which mislead the model and affect the convergence of parameters. Existing methods fail to provide an efficient solution for automatically grading breast cancer on limited annotated WSIs. In this paper, we present a new semi-supervised framework based on expectation maximization (EM). We leverage unannotated WSIs to adjust the deep learning model on a limited annotated dataset, reducing the reliance on expensive pixel-wise annotations. The main contributions of the paper are:

An overview of our semi-supervised learning framework is shown in Fig.2 In the semi-supervised learning framework, only part of whole slide images is annotated, which is defined as set D. The label of some slides is unknown, which is defined as set U. Let yi denote the label for patch xi∈D. Let hidden variable zj denote the label for patch xj∈U. We initialize the CNN model on D and update the model parameter to θ0

. We apply initial CNN model to produce the probability map

P(zj|xj) of xj∈U. The EM algorithm alternates between the E-step for estimating the hidden labels zj and the M-step for computing optimal model parameters with maximized P(X|θ,Z). The probability map P(zj|xj) is projected to a scaled value between 0 and 1, which is used to generate the consistent heatmap (see Fig.2

Next, The most representative and credible patches based on collaborative filtering are selected to train the CNN model in the next iteration. Initialization Assume the patches are independently and identically distributed (i.i.d.). The initial parameter θ0 is obtained from the CNN model, which is trained on annotated dataset D. Here, θ0 is computed as:

follows an uniform distribution, we formulate the objective function

Hard Example Mining Hard example mining is used in the initialization step to fully exploit the annotated dataset, especially those with wrong classification results. An effective coefficient α is defined as in Equation (4). The higher the value of α is, the harder and more valuable the corresponding patch is for model training.

Here, ci denotes the class label of the patch xi, and P(ycji) denotes the probability map.

For the initialization step, we first train our model on 50% of the annotated data. Then, we apply this model on the rest of the data and calculate the effective coefficients. Patches with effective coefficient in the first quintile (top 20%) are selected to retrain the model. Collaborative Filtering

Foreground Patch Extraction on WSI Image The high resolution images of WSIs need to be converted into patches for use. However, a large part of WSI is background, which produces uninformative patches in the datasets, and thus should be excluded. The widely used foreground extraction method Ostu fails to extract certain parts of the tissue from the slide. Therefore, we adapt the graph-based image segmentation method in [1] for foreground extraction. For a given slide, we construct an undirected graph G(V,E). In G, each node vi,j∈V corresponds to a pixel. The edge set E={(vi,j,vi+1,j),(vi,j,vi,j+1))} correspond to the connection between adjacent pixels. We set the edge weight to be W(vi,j,vi+1,j)=∥vi,j−vi+1,j∥. Then we compute the minimum spanning tree T using Kruskal’s algorithm [4], and delete the edges in T whose weights are greater than a prespecified threshold (100 in the experiments). The deletion of these edges produces a forest, i.e., a set of sub-trees (e.g., T1,T2,⋯,Tn). Now we compute the average RGB values for the sub-trees (e.g., RGB(T1),RGB(T2),⋯,RGB(Tn)). Among the computed average RGB values, assume the maximum value is u. Then all the sub-trees with average RGB value greater than u−45 are set as background. Then the foreground mask is obtained as shown in Fig.3. According to the foreground mask, we crop the WSI into patches with 50% overlap, where each patch consists of 1536×1536 pixels. Patches with less than 40% foreground pixels are considered to be background, which are not used for classification.

In Kwok’s work in [5], the class value of a patch is the mean of the class values of all pixels in the patch. Our experiments show that the above method tends to generate wrong labels, which disrupt the learning process. For example, when half of a patch contains In-Situ areas and the rest is normal, Kwok’s method labels this patch as benign even if there are no benign tissues at all. In contrast, our EM-based method effectively avoids the drawbacks of Kwok’s method.

Our neural network is a fine-tuned vgg19 network with batch normalization. Given the large patches of size

1536×1536, we resize them into 512×512, and then feed them into the network. For adapting to the fully connected layers, we add an average pooling layer, which converts the 512×16×16 feature map into a 512×1×1 vector. The patch-wise experimental results are summarized in Tabel 1. we first apply active learning method (ALM) to continually finetune the classification model with informative and effective datasets instead of retrain the model with all datasets. ALM-10%, ALM-20%, and ALM-30% refer to different models trained on corresponding portions of annotated datasets. FSL is a model trained on all the annotated dataset. Our-10%, Our-20%, and Our-30% are the proposed EM-based model trained on corresponding portions of annotated datasets. For example, Our-30% denotes our proposed method using 30% of the whole annotated dataset.

From the experiment, FSL obtains 0.76, 0.89 and 0.82 for F1 score, accuracy and precision, respectively. Kwok’s method obtains similar results of 0.63, 0.77, and 0.57. However, with 30% of the whole annoatated dataset, ALM obtains 0.83, 0.90, and 0.74, which outperforms FSL. This can be explained by the exclusion of the uninformative data. In contrast, our proposed method obtains 0.86, 0.91, 0.79 for F1 score, accuracy and precision, respectively. Among the different methods, Our-30% achieved the best results using only 30% of annotated data combined with unannotated data. Moreover, our method significantly reduces the runtime for finetuning the model as in ALM.

In this paper, we have proposed an effective semi-supervised approach based on the EM model, which significantly reduces the reliance on the annotated dataset. Experiment results show that the proposed method achieves remarkable performance with only 30% annotated datasets. Moreover, the proposed method effectively traces the small cancer areas, which is one of the key markers for cancer diagnosis. In the future, more parameters and metrics will be introduced in the system, such as max area of cancer, number of different types of cancer, degree of patient, etc. More prior knowledge will be introduced for generating adaptive parameters in the proposed EM framework.