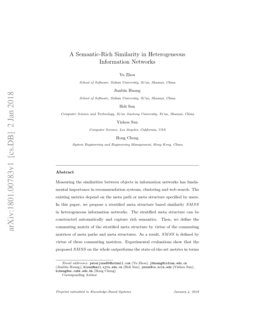 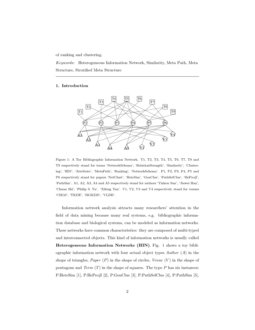 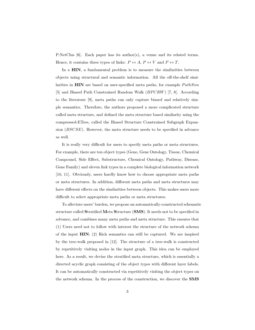 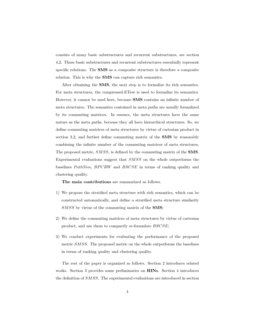 In a HIN, a fundamental problem is to measure the similarities between objects using structural and semantic information. All the off-the-shelf similarities in HIN are based on user-specified meta paths, for example PathSim SHYYW:2011 and Biased Path Constrained Random Walk (BPCRW) LC:2010b ; LC:2010a . According to the literature HZCSML:2016 , meta paths can only capture biased and relatively simple semantics. Therefore, the authors proposed a more complicated structure called meta structure, and defined the meta structure based similarity using the compressed-ETree, called the Biased Structure Constrained Subgraph Expansion (BSCSE). However, the meta structure needs to be specified in advance as well.

To alleviate users’ burden, we propose an automatically-constructed schematic structure called Stratified Meta Structure (SMS). It needs not to be specified in advance, and combines many meta paths and meta structure. This ensures that (1) Users need not to follow with interest the structure of the network schema of the input HIN; (2) Rich semantics can still be captured. We are inspired by the tree-walk proposed in NPEKK:2011 . The structure of a tree-walk is constructed by repetitively visiting nodes in the input graph. This idea can be employed here. As a result, we devise the stratified meta structure, which is essentially a directed acyclic graph consisting of the object types with different layer labels. It can be automatically constructed via repetitively visiting the object types on the network schema. In the process of the construction, we discover the SMS consists of many basic substructures and recurrent substructures, see section 4.2. These basic substructures and recurrent substructures essentially represent specific relations. The SMS as a composite structure is therefore a composite relation. This is why the SMS can capture rich semantics.

The main contributions are summarized as follows.

To the best of our knowledge, Sun et al. SYH:2009 ; SHZYCW:2009 ; SH:2012 first proposed the definition of the HIN and studied ranking-based clustering in HINs. Shi et al. SLZSY:2017 gave a comprehensive summarization of research topics on HINs including similarity measure, clustering, link prediction, ranking, recommendation, information fusion and classification etc. Article HeteClass:2017 proposed a novel meta-path based framework called HeteClass for transductive classification of target type objects. This framework can explore the network schema of the input HIN and incorporate the expert’s knowledge to generate a collection of meta paths. Below, we summarize related works on similarity measures in information networks.

For Similarity measures in heterogeneous information networks, Sun SHYYW:2011 proposed a meta path based similarity measure in HINs, called PathSim. Lao and Cohen LC:2010b ; LC:2010a studied the problem of measuring the entity similarity in labeled directed graphs, and defined a Biased Path Constrained Random Walk (BPCRW) model. It can be applied to HINs. Huang et al. HZCSML:2016 proposed a similarity BSCSE, which can capture more complex semantics. Shi et al. SKHYW:2014 proposed a relevance measure HeteSim which can be used to evaluate the relatedness of two object with different types. For a user-specified meta path, HeteSim is based on the pairwise random walk from its two endpoints to its center. Xiong et al. XZY:2015 studied the problem of finding the top-k similar object pairs by virtue of locality sensitive hashing. Zhu et al. SEMATCH:2017

proposed an integrated framework for the development, evaluation and application of semantic similarity for knowledge graphs which can be viewed as complicated heterogeneous information networks. This framework included many similarity tools and allowed users to compute semantic similarities. In the article

In this section, we introduce some important concepts related to HINs including network schema in subsection 3.1, meta paths and meta structures in 3.2.

As defined in article SWLYW:2014 , an information network is essentially a directed graph G=(V,E,A,R). V and E respectively denote its sets of objects and links, and A and R respectively denote its sets of object types and link types. Map ϕ:V→A denotes the object type ϕ(v) of object v∈V. That is to say, each object in V belongs to a specific object type. Similarly, map ψ:E→R represents the link type ψ(e) of link e∈E, i.e. each link in E belongs to a specific link type. In essence, ψ(e) contains some semantic because it is a relation from the source object type to the target object type. If two links belong to the same link type, they share the same starting object type as well as the ending object type. G is called a Heterogeneous Information Network if |A|>1 or |R|>1. Otherwise, it is called a homogeneous information network.

For each HIN, there is a meta-level description for it, called its network schema. Specifically, the Network schema TG=(A,R) SWLYW:2014 of G is a directed graph consisting of the object types in A and the link types in R. Fig. 2(a) shows the network schema for the HIN in Fig. 1. In this paper, we also use a biological information network consisting of six object types, i.e. Gene (G), Tissue (T), GeneOntology (GO), ChemicalCompound (CC), Substructure (Sub) and SideEffect (Si), and five link types, i.e. GO↔G, T↔G, G↔CC, CC↔Si, CC↔Sub. Its network schema is shown in 2(b).

Meta path SHYYW:2011 is essentially an alternate sequence of object types and link types, i.e. O1R1−→O2R2−→⋯Rl−2−−−→Ol−1Rl−1−−−→Ol, Oi∈A,i=1,⋯,l and Rj∈R,j=1,⋯,l−1. Note that Rj is a link type starting from Oj to Oj+1,j=1,⋯,l−1. In essence, the meta path contains some composite semantic because it represents a composite relation R1∘R2∘⋯∘Rl−1. Unless stated otherwise, the meta path P=O1R1−→O2R2−→⋯→Rl−2Ol−1Rl−1−−−→Ol can be compactly denoted as (O1,O2,⋯,Ol−1,Ol). There are some useful concepts related to the meta path in literature SHYYW:2011 , i.e. length of P, path instance following P, reverse meta path of P, symmetric meta path and commuting matrix MP of P. For example, Fig. 3(a,b,c) show three meta paths in the network schema shown in Fig. 2(a). They can be compactly denoted as (A,P,A), (A,P,V,P,A) and (A,P,T,P,A). They can express different semantics. (A,P,A) expresses “Two authors cooperate on a paper.” (A,P,V,P,A) express “Two authors publish their papers in the same venue.” (A,P,T,P,A) express “Two authors publish their papers containing the same terms.”

Given a meta structure S, we sort its object types with regard to the topological order. Suppose its height is equal to h1. Let Li denote the set of object types on the layer i, and CLi denote the cartesian product of the set of objects belonging to different types in Li, i=0,1,⋯,h1−1. The relation matrix WLiLi+1 from CLi to CLi+1 is defined as the one whose entries (s,t) are equal to 1 if the s-th element CLh(s) of CLh is adjacent to the t-th one CLh+1(t) of CLh+1 in G, otherwise 0. CLh(s) and CLh+1(t) are adjacent if and only if for any u∈CLh(s) and v∈CLh+1(t), u and v are adjacent in G if ϕ(u) and ϕ(v) are adjacent in TG. The commuting matrix of S is defined as

Each entry in MS represents the number of instances following S. The commuting matrix of its reverse is equal to MTS..

For a given meta structure, its BSCSE with α=1 can be expressed by its commuting matrix as well. The following lemma 3.1 describes this conclusion. Throughout this paper, we use ¯X=U−1XX to denote its normalized version, where UX is a diagonal matrix whose nonzero entries are equal to the row sum of X.

Given a meta structure S, suppose that Li denotes the set of object types on its i-th layer. When α=1,

We prove the lemma by induction on h≥1.

Inductive Step. Assume the conclusion holds for h. Below, we prove it also holds for h+1. Obviously,

Combining formulas 1 and 2, we have

In this paper, we aim to define a similarity measure in HINs, which does not depend on any pre-specified schematic structures. This is a reasonable restriction because specifying meta paths or meta structures is a cumbersome job.

Below, we give some properties of SMS via lemma 4.3. Given a SMS DG, we sort its object types in the topological order. Let Lh denote the set of object types with the layer label h except the target object type. Let CLh denote the cartesian product of the set of objects belonging to different types in Lh, h=0,1,⋯,+∞. The relation matrix WLhLh+1 from CLh to CLh+1 is defined as similarly as the commuting matrices of meta structures defined in section 3.2. A substructure consisting of three layers h′,h′+1,h′+2 in DG is recurrent if and only if Lh=Lh+2 for h=h′,h′+2,⋯,+∞. Let h0 denote the height of the spanning tree of TG yielded by Breadth-First Search (BFS). Without loss of generality, we assume the source object type in the network schema does not contain self-loops. If the source object type has a self-loop, we assign two roles to it: target object type and intermediate object type. The first role is to treat it as the target object type, and the second is to treat it as an non-source and non-target object type.

In the process of computing WLiLi+1, we need to visit all the elements in CLi. In practice, there are many all-zero columns in WLiLi+1. We should remove all the all-zero columns in WLiLi+1 and the corresponding rows in WLi+1Li+2. Removing the r-th column of WLiLi+1 implies there are no links between the r-th object in CLi+1 and any object in CLi. Therefore, it is unnecessary to consider the links between it and the objects in CLi+2.

1) The conclusion holds obviously according to the construction rule of DG and our assumptions.

3) For any t∈Lh,h≥h0, it must be adjacent to an object type on the layer h+1. Obviously, t∈Lh+2 according to the construction rule of DG. Thus, we have Lh⊆Lh+2. Similarly, Lh+2⊆Lh. Therefore, Lh=Lh+2.

4) This property obviously holds according to property 3.

5) We prove the lemma by induction on h.

Initial Step. When h≤2h0, we obviously have n(h)=0 according to the construction rule of DG.

For case 1, we prove it by induction on h. Case 2 is similar.

When h≥2h0, there are n(h) recurrent substructures according to property 6 in lemma 4.3. Thereby, the obtained meta structure for h can be denoted as

The obtained meta structure for h+2 is

So, the conclusion holds when h+2. ∎

The matrix power series ∑+∞j=0Rj1 may be divergent. In addition, different meta structures in the SMS should also have different weights. As a result, the normalized version of MD is equal to

is a row random matrix and

denote the identity matrix with the same size as

The Stratified Meta Structure based Similarity, SMSS, of the source object os and the target object ot is defined as

Using note 4.2 result in that CLh≠CLh+2 for h=h0,h0+2,⋯,+∞. As a result, the matrix R defined previously is not square. To address this issue, the elements in CLh+2−CLh are removed from CLh+2. This leads to losing some semantics.

Now, we take the HIN shown in Fig. 1 as an example to illustrate note 4.5. The object A:Yizhou Sun is selected as the source one. As shown in the first box (CL0) of the left-hand side of Fig. 4, A:Yizhou Sun marked as red color is kept, and the others are removed. In the second and third boxes (CL1 and CL2), the elements marked as red color are kept and the others are removed. In the fourth box (CL3), P:GenClus in addition to the red elements in CL1 is also kept because it is adjacent to (V:VLDB,T:HIN). Obviously, CL1≠CL3. In the fifth box (CL4), the elements marked green color in addition to the red ones in CL2 should also be kept because they are adjacent to P:GenClus. Obviously, CL2≠CL4. According to the approximation strategy, they are removed from CL4. That means some semantics are lost.

where ¯R=WLh0Lh0+1WTLh0Lh0+1 still denotes the relation matrix of the recurrent substructure. SMSS is still defined via formula 7 using ¯MnewD.

In practice, it is very time-consuming to compute (I−λ¯R)−1 in formula 8. Note that ¯Al2h0

is a row vector according to the locality strategy. Therefore, computing

¯Al2h0(I−λ¯R)−1 is equivalent to solving the linear equations (I−λ¯R)TX=¯AlT2h0. We apply Lower-Upper (LU) decomposition to I−λ¯R and then use the LU factors to obtain X numerical_analysis .