There is a growing interest in joint multi-subject fMRI analysis. The challenge of such analysis comes from inherent anatomical and functional variability across subjects. One approach to resolving this is a shared response factor model. This assumes a shared and time synchronized stimulus across subjects. Such a model can often identify shared information, but it may not be able to pinpoint with high resolution the spatial location of this information. In this work, we examine a searchlight based shared response model to identify shared information in small contiguous regions (searchlights) across the whole brain. Validation using classification tasks demonstrates that we can pinpoint informative local regions. 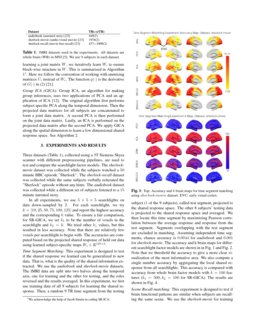 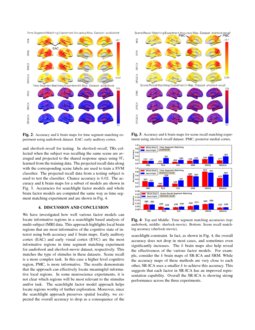 The increasing popularity of naturalistic paradigms in fMRI (such as mov...
Meenakshi Khosla, et al. ∙

The sensitivity of the statistical data analysis of fMRI data is limited by amount of data available. Hence there is an increasing interest in gathering data from multiple sessions and/or multiple subjects. It is hoped that this will increase statistical sensitivity in testing hypotheses about human cognition [1, 2]. Here we focus on the problem of analyzing fMRI data across multiple subjects all experiencing the same time synchronized stimulus. The raw fMRI data is thus temporally aligned, but is neither anatomically nor functionally aligned across subjects. Traditional methods of addressing this via anatomical registration, [3, 4, 5], ignore the inherent functional variability across subjects. More recent approaches attempt to use anatomical and functional data to align, or register, functional structure [6, 7, 8]. A distinct approach learns a factor model that jointly models the functional responses. Such factor methods have shown promising results and are attracting increased attention, e.g., [9, 10, 11, 12, 13, 14].

To make things more precise let Xi∈Rvx×vy×vz×t denote the data from subject i, i=1:m, where (vx,vy,vz) are the number of voxels in the 3D volume along the (x,y,z) axes, and t is number of time samples (TRs) in the experiment. Typically one re-arranges Xi into a v by t matrix, where v=vx×vy×vz. If one is only interested in voxels within a given region of interest (ROI), then Xi is simply the sub-matrix formed by restriction to those voxels. In this setting, the basic goal is to jointly factorize the matrices Xi into a product WiS so as to minimize some constrained or regularized objective function. Here k is the number of factors, Wi∈Rv×k, and S∈Rk×t. The “mixing matrices” Wi are subject specific (acknowledging the distinct functional topographies of the subjects), while the “source matrix” S provides a set of k shared elicited time responses. For this reason we call such models shared response models.

Form X=[XT1…XTm]T∈Rmv×t by stacking the Xi along the spatial dimension, and similarly form W=[WT1…WTm]T∈Rmv×k. Then X=WS+E where S∈Rk×t is the shared response and E is the model error. W and S are then determined by minimizing a regularized cost function of the terms in the decomposition subject to constraints on W and S.

As a specific example, PCA selects W and S to minimize ∥X−WS∥2F. The resulting W has orthonormal columns and is partitioned into m sub-matrices Wi, i=1:m. Since S=WTX=∑iWTiXi, the sources are formed as linear combinations of potentially all voxel time courses. Similarly, using a compact SVD: X=UΣVT, U=XVΣ−1, and W is the first k columns of U. So the columns of W are linear combinations of potentially all columns of X.

In general, in a shared response factor model Wi can be formed as a linear combination of all columns in Xi and S can be formed using a linear combination of all voxel time courses. In this sense the factor model has no assurance of preserving spatial locality. Such methods are usually applied to large pre-defined ROIs, such as PMC [14] or ventral temporal cortex (VT) [13], to investigate the relationship between the ROI and a specific stimulus or cognitive state.

In this paper we specifically set out to preserve spatial locality in forming the shared response factor model. This is important in exploratory analyses where one seeks to detect and study small local regions in the brain where shared information is present. There are two possible approaches: a searchlight analysis [15, 16, 17, 18], or adding spatial regularization to the factorization cost function. Both approaches are worthy of study. Here we focus on the searchlight approach.

A searchlight uses a fixed number of neighboring voxels to conduct analysis for each voxel location, and the same analysis is conducted on all locations. This idea can be used to extend any ROI-based factor model to overlapping searchlights. We combine factor models of the SRM form and searchlight analysis to enable localized analysis in the whole brain multi-subject fMRI functional alignment. In detail, a fixed sized searchlight centering at voxel i is used to scan over the whole brain. For each searchlight location, a factor model is used to functionally align across subjects, and an analysis is performed based on the results of the alignment. Statistics from the analysis (e.g., classification accuracy) is assigned to the center voxel i of that specific searchlight. We report the accuracy of each searchlight on a given classification task. This helps identify locations in the brain in which information is shared across subjects for a specific cognitive task.

For multi-subject neuroscience datasets and experiments, we provide an effective method for locating where the shared information is over the whole brain while keeping the quality of the found shared information. So our method can serve as a first step in multi-subject fMRI analysis to help identify regions that worth further investigation in a neuroscience experiment. In some factor models, the number of latent factors k can be pre-specified. In this case, we record the k value that gives the best analysis result for each searchlight. We report both the accuracy and the best k value on a brain map as a proxy for the presence and richness of a shared cognitive state across subjects. We also developed two new variants of the ICA and group ICA factor models. These variants show good performance in the functional alignment task.

PCA: Standard PCA is a deterministic model. We have already outlined how to obtain the Wi and S in this case.

subject to WTiWi=Ik. This is done in a graphical model framework that provides Bayesian regularization. This SRM can be considered as a variant of pPCA in a multi-source setting [20, 14]. The shared response of some held out data X′i for subject i can be computed as S′i=WTiX′i.

Hyperalignment (HA) [13]: HA is a deterministic model that learns orthogonal Wi∈Rv×v to minimize (1). It does not have a selectable factor dimension k<v. For k=v, the non-probabilistic version of the SRM in [14] yields HA. So HA can be considered a special case of the SRM in [14]. A searchlight application of HA has been explored in [17]. For these reasons we do not explore HA further here.

[10, 11]. We use the FastICA algorithm, an efficient probabilistic method [10] optimizing negentropy of the shared response S. This is formulated as

where G(⋅) is a nonquadratic function, e.g. logcosh, and N

is a standard normal random variable. This yields

SR-ICA: We also study a new algorithm we call shared response ICA (SR-ICA). Motivated by the framework in [14], we modify the FastICA algorithm. In SR-ICA, the block structure of the subject data is preserved by spatial concatenation in both X and W. The key difference is that instead of learning a joint matrix W, we iteratively learn Wi to ensure block-wise structure in W. This is summarized in Algorithm 1111We acknowledge the help of Jacob Simon in coding SR-ICA.. Here we follow the convention of working with unmixing matrices Ui instead of Wi. The function g(⋅) is the derivative of G(⋅) in (2) [21].

Group ICA (GICA): Group ICA, an algorithm for making group inferences, uses two applications of PCA and an application of ICA [12]. The original algorithm first performs subject specific PCA along the temporal dimension. Then the projected data matrices for all subjects are concatenated to form a joint data matrix. A second PCA is then performed on the joint data matrix. Lastly, an ICA is performed on the projected data matrix after the second PCA. We apply GICA along the spatial dimension to learn a low dimensional shared response space. See Algorithm 2.

In all experiments, we use 5×5×5 searchlights on data down-sampled by 2. For each searchlight, we try k=[10,25,50,75,100,125] and report the highest accuracy and the corresponding k value. To ensure a fair comparison, for SR-GICA, we set k1 to be the number of voxels in the searchlight and k2=k. We tried other k1 values, but this resulted in less accuracy. Note that there are relatively few voxels per searchlight to begin with. The accuracies are computed based on the projected shared response of held out data using learned subject-specific maps Wi∈R125×k.

Time Segment Matching: This experiment is designed to test if the shared response we learned can be generalized to new data. That is, what is the quality of the shared information extracted. We use the audiobook and sherlock-movie datasets. The fMRI data are split into two halves along the temporal axis, one for training and the other for testing, and the roles reversed and the results averaged. In this experiment, we first use training data of all 9 subjects for learning the shared response. Then, a random 9 TR time segment from the testing subject (1 of the 9 subjects), called test segment, projected to the shared response space. The other 8 subjects’ testing data is projected to the shared response space and averaged. We then locate this time segment by maximizing Pearson correlation between the average response and response from the test segment. Segments overlapping with the test segment are excluded in matching. Assuming independent time segments, chance accuracy is 0.0044 for audiobook and 0.001 for sherlock-movie. The accuracy and k brain maps for different searchlight factor models are shown in in Fig. 1 and Fig. 2. Note that we threshold the accuracy to give a more clear visualization of the most informative area. We also compute a single number accuracy by aggregating the local shared response from all searchlights. This accuracy is compared with accuracy from whole brain factor models with k=100 features (k1=500,k2=100 for SR-GICA). The results are shown in Fig. 4.

We have investigated how well various factor models can locate informative regions in a searchlight based analysis of multi-subject fMRI data. This approach highlights local brain regions that are most informative of the cognitive state of interest using both accuracy and k brain maps. Early auditory cortex (EAC) and early visual cortex (EVC) are the most informative regions in time segment matching experiment for audiobook and sherlock-movie dataset, respectively. This matches the type of stimulus in these datasets. Scene recall is a more complex task. In this case a higher level cognitive region, PMC, is more informative. The results demonstrate that the approach can effectively locate meaningful informative local regions. In some neuroscience experiments, it is not clear which regions will be most relevant to the stimulus and/or task. The searchlight factor model approach helps locate regions worthy of further exploration. Moreover, since the searchlight approach preserves spatial locality, we expected the overall accuracy to drop as a consequence of the searchlight constraint. In fact, as shown in Fig. 4, the overall accuracy does not drop in most cases, and sometimes even significantly increases. The k brain maps also help reveal the effectiveness of the various factor models. For example, consider the k brain maps of SR-ICA and SRM. While the accuracy maps of these methods are very close to each other, SR-ICA uses a smaller k to achieve this accuracy. This suggests that each factor in SR-ICA has an improved representation capability. Overall the SR-ICA is showing strong performance across the three experiments.