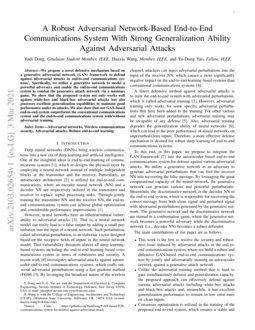 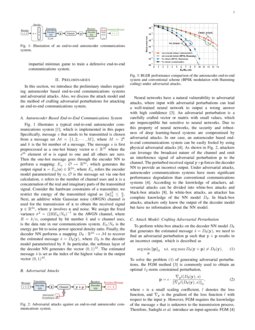 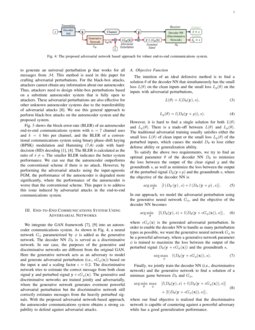 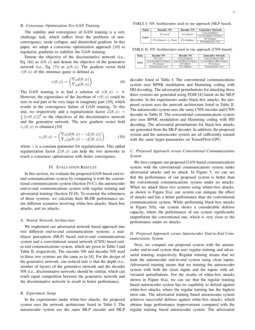 This study explores how robots and generative approaches can be used to ...
Jordan J. Bird, et al. ∙

Deep neural networks (DNNs) bring wireless communications into a new era of deep learning and artificial intelligence. One of the insightful ideas is end-to-end learning of communications systems

, which re-designs the physical layer by employing a neural network instead of multiple independent blocks at the transmitter and the receiver. Particularly, an autoencoder architecture

[goodfellow2016deep] is utilized for end-to-end communications, where an encoder neural network (NN) and a decoder NN are respectively utilized in the transmitter and receiver to replace signal processing tasks. Through jointly training the transmitter NN and the receiver NN, the end-to-end communications system can achieve global optimization and considerable performance improvements [o2017introduction].

However, neural networks have an inherent/natural vulnerability to adversarial attacks [goodfellow2014explaining]

[sadeghi2019physical] investigates adversarial attacks against autoencoder end-to-end communications systems, which crafts universal adversarial perturbations using a fast gradient method (FGM) [goodfellow2014explaining]. By leveraging the broadcast nature of the wireless channel, attackers can inject adversarial perturbations into the input of the receiver NN, which causes a more significantly negative impact on the end-to-end learning based systems than conventional communications systems [sadeghi2019physical].

The main contributions of our paper are as follows.

Fig. 1 illustrates a typical end-to-end autoencoder communications system [o2017introduction], which is implemented in this paper. Specifically, message s that needs to be transmitted is chosen from a message set M={1,2,⋯,M}, where M=2k and k is the bit number of a message. The message s is first preprocessed as a one-hot binary vector o∈RM where the sth element of o is equal to one and all others are zero. Then the one-hot message goes through the encoder NN to perform a mapping: Eα:O↦R2n, which generates the output signal x=Eα(o)∈R2n, where Eα refers the encoder model parameterized by α, O is the message set via one-hot calculation, n refers to the number of channel uses and x is a concatenation of the real and imaginary parts of the transmitted signal. Consider the hardware constraints of a transmitter, we restrict the energy of the transmitted signal as ∥x∥22≤n2. Next, an additive white Gaussian noise (AWGN) channel is used for the transmission of x to obtain the received signal y∈R2n, where y involves x

and noise. We assign the fixed variance

σ2=(2REb/N0)−1 in the AWGN channel, where R=k/n, computed by bit number k and n channel uses, is the data rate in our communications system. Eb/N0 is the energy per bit to noise power spectral density ratio. Finally, the decoder NN performs a mapping Dθ:R2n↦M

to recover the estimated message

^s=Dθ(y), where Dθ is the decoder model parameterized by θ

. In particular, the softmax layer of the decoder NN generates the vector

To perform white-box attacks on the decoder NN model Dθ that generates the estimated message ^s=Dθ(y), we need to find an adversarial perturbation p such that y+p results in an incorrect output, which is described as

To solve the problem (1) of generating adversarial perturbations, the FGM method [goodfellow2014explaining] is commonly used to obtain an optimal ℓ2-norm constrained perturbation,

where ϵ is a small scaling coefficient, l

denotes the loss function, and

∇y is the gradient of the loss function l with respect to the input y. However, FGM requires the knowledge of the message s that is unknown to the transmission process. Therefore, Sadeghi et al. introduce an input-agnostic FGM [sadeghi2019physical] to generate an universal perturbation p that works for all messages from M. This method is used in this paper for crafting adversarial perturbations. For the black-box attacks, attackers cannot obtain any information about our autoencoder. Thus, attackers need to design white-box perturbations based on a substitute autoencoder system that is fully open to attackers. These adversarial perturbations are also effective for other unknown autoencoder systems due to the transferability of adversarial attacks [yuan2019adversarial]. We use this general approach to perform black-box attacks on the autoencoder system and the proposed system.

Fig. 3 shows the block-error-rate (BLER) of an autoencoder end-to-end communications system with n=7 channel uses and k=4 bits per channel, and the BLER of a conventional communications system using binary phase-shift keying (BPSK) modulation and Hamming (7,4) code with hard-decision (HD) decoding [o2017introduction, sadeghi2019physical]. The BLER is calculated as the ratio of ^s≠s. The smaller BLER indicates the better system performance. We can see that the autoencoder outperforms the conventional scheme if there is no attack. However, by performing the adversarial attacks using the input-agnostic FGM, the performance of the autoencoder is degraded more significantly, where the performance of the autoencoder is worse than the conventional scheme. This paper is to address this issue induced by adversarial attacks in the end-to-end communications system.

The intuition of an ideal defensive method is to find a solution θ of the decoder NN that simultaneously has the small loss L(θ) on the clean inputs and the small loss Lp(θ) on the inputs with adversarial perturbations,

In our approach, we model the adversarial perturbation using the generative neural network Gϕ, and the objective of the decoder NN becomes

where ϵGϕ(x) is the generated adversarial perturbation. In order to enable the decoder NN to handle as many perturbation types as possible, we want the generative neural network Gϕ to be a powerful adversary, where a generative network parameter ϕ is trained to maximize the loss between the output of the perturbed signal Dθ(y+ϵGϕ(x)) and the groundtruth s,

Finally, we jointly train the decoder NN (i.e., discriminative network) and the generative network to find a solution of a minimax game between Dθ and Gϕ,

where our final objective is realized that the discriminative network is capable of countering against a powerful adversary while has a good generalization performance.

The stability and convergence of GAN training is a very challenge task, which suffers from the problems of non-convergence, mode collapse, and diminished gradient. In this paper, we adopt a consensus optimization approach [mescheder2017numerics] to regularize gradients to stabilize the GAN training.

The GAN training is to find a solution of v(θ,ϕ)=0

. However, the eigenvalues of the Jacobian of

v(θ,ϕ) could be zero in real part or be very large in imaginary part [mescheder2017numerics], which results in the convergence failure of GAN training. To this end, we respectively add a regularization factor L(θ,ϕ)=12∥v(θ,ϕ)∥2 to the objectives of the discriminative network and the generative network. The new gradient vector field vs(θ,ϕ) is obtained [mescheder2017numerics]

where γ is a constant parameter for regularization. This added regularization factor L(θ,ϕ) can help the two networks to reach a consensus optimization with better convergence.

. The conventional communications system also uses BPSK modulation and Hamming coding with HD decoding. The adversarial perturbations for black-box attacks are generated from the MLP decoder. In addition, the proposed system and the autoencoder system are all sufficiently trained with the same hyper-parameters on TensorFlow-GPU.