A rigorous method to compare interpretability of rule-based algorithms

Interpretability is becoming increasingly important in predictive model analysis. Unfortunately, as mentioned by many authors, there is still no consensus on that idea. The aim of this article is to propose a rigorous mathematical definition of the concept of interpretability, allowing fair comparisons between any rule-based algorithms. This definition is built from three notions, each of which being quantitatively measured by a simple formula: predictivity, stability and simplicity. While predictivity has been widely studied to measure the accuracy of predictive algorithms, stability is based on the Dice-Sorensen index to compare two sets of rules generated by an algorithm using two independent samples. Simplicity is based on the sum of the length of the rules deriving from the generated model. The final objective measure of the interpretability of any rule-based algorithm ends up as a weighted sum of the three aforementioned concepts. This paper concludes with the comparison of the interpretability between four rule-based algorithms. 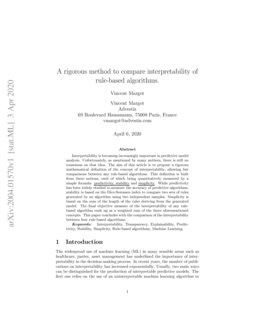 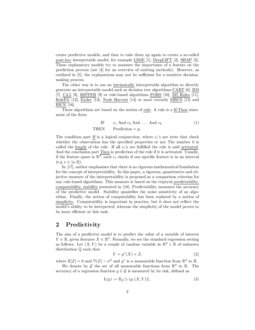 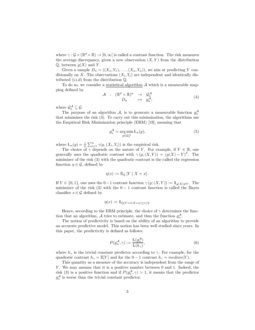 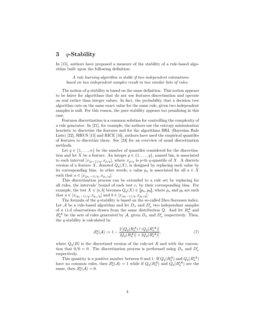 The widespread use of machine learning (ML) in many sensible areas such as healthcare, justice, asset management has underlined the importance of interpretability in the decision-making process. In recent years, the number of publications on interpretability has increased exponentially. Usually, two main ways can be distinguished for the production of interpretable predictive models. The first one relies on the use of an uninterpretable machine learning algorithm to create predictive models, and then to take them up again to create a so-called post-hoc interpretable model, for example LIME [1], DeepLIFT [2], SHAP [3]. These explanatory models try to measure the importance of a feature on the prediction process (see [4] for an overview of existing methods). However, as outlined in [5], the explanations may not be sufficient for a sensitive decision-making process.

The other way is to use an intrinsically

These algorithms are based on the notion of rule. A rule is a If-Then statement of the form

The condition part If is a logical conjunction, where ci’s are tests that check whether the observation has the specified properties or not The number k is called the length of the rule. If all ci’s are fulfilled the rule is said activated. And the conclusion part Then is prediction of the rule if it is activated. Usually, if the feature space is Rd, each ci checks if one specific feature is in an interval (e.g x∈[a,b]).

In [17], author emphasizes that there is no rigorous mathematical foundation for the concept of interpretability. In this paper, a rigorous, quantitative and objective measure of the interpretability is proposed as a comparison criterion for any rule-based algorithms. This measure is based on the triptych predictability, computability, stability presented in [18]: Predictability measures the accuracy of the predictive model. Stability quantifies the noise sensitivity of an algorithm. Finally, the notion of computability has been replaced by a notion of simplicity. Computability is important in practice, but it does not reflect the model’s ability to be interpreted, whereas the simplicity of the model proves to be more efficient at this task.

The aim of a predictive model is to predict the value of a variable of interest Y∈R, given features X∈Rd. Formally, we set the standard regression setting as follows: Let (X,Y)

be a couple of random variable in

Rd×R of unknown distribution Q such that

We denote by G the set of all measurable functions from Rd to R. The accuracy of a regression function g∈G is measured by its risk, defined as

where γ:G×(Rd×R)→[0,∞[ is called a contrast function. The risk measures the average discrepancy, given a new observation (X,Y) from the distribution Q, between g(X) and Y.

Given a sample Dn=((X1,Y1),…,(Xn,Yn)), we aim at predicting Y conditionally on X. The observations (Xi,Yi) are independent and identically distributed (i.i.d) from the distribution Q.

To do so, we consider a statistical algorithm A which is a measurable mapping defined by

The purpose of an algorithm A, is to generate a measurable function gAn that minimizes the risk (3). To carry out this minimization, the algorithms use the Empirical Risk Minimization principle (ERM) [19], meaning that

Hence, according to the ERM principle, the choice of γ determines the function that an algorithm, A

tries to estimate, and thus the function

The notion of predictivity is based on the ability of an algorithm to provide an accurate predictive model. This notion has been well studied since years. In this paper, the predictivity is defined as follows:

where hγ is the trivial constant predictor according to γ. For example, for the quadratic contrast hγ=E[Y] and for the 0−1 contrast hγ=median(Y).

This quantity as a measure of the accuracy is independent from the range of Y. We may assume that it is a positive number between 0 and 1. Indeed, the risk (3) is a positive function and if P(gAn,γ)>1, it means that the predictor gAn is worse than the trivial constant predictor.

In [15], authors have proposed a measure of the stability of a rule-based algorithm built upon the following definition:

The notion of q

-stability is based on the same definition. This notion appears to be fairer for algorithms that do not use features discretisation and operate on real rather than integer values. In fact, the probability that a decision tree algorithm cuts on the same exact value for the same rule, given two independent samples is null. For this reason, the pure stability appears too penalizing in this case.

Features discretization is a common solution for controlling the complexity of a rule generator. In [21]

, for example, the authors use the entropy minimization heuristic to discretize the features and for the algorithms BRL (Bayesian Rule Lists)

, authors have used the empirical quantiles of features to discretize them. See

[23] for an overview of usual discretization methods.

Let q∈{1,…,n} be the number of quantiles considered for the discretization and let X be a feature. An integer p∈{1,…,q}, named bin, is associated to each interval [x(p−1)/q,xp/q], where xp/q is p-th q-quantile of X. A discrete version of a feature X, denoted Qq(X), is designed by replacing each value by its corresponding bins. in other words, a value pa is associated for all a∈X such that a∈[x(pa−1)/q,xpa/q].

This discretization process can be extended to a rule set by replacing for all rules, the intervals’ bound of each test ci by their corresponding bins. For example, the test X∈[a,b] becomes Qq(X)∈[[pa,pb]], where pa and pb are such that a∈[x(pa−1)/q,xpa/q] and b∈[x(pb−1)/q,xpb/q].

The formula of the q-stability is based on the so-called Dice-Sorensen index. Let A be a rule-based algorithm and let Dn and D′n two independant samples of n i.i.d observations drawn from the same distribution Q. And let RAn and R′An be the sets of rules generated by A, given Dn and D′n respectively. Then, the q-stability is calculated by

where Qq(R) is the discretized version of the rule-set R and with the convention that 0/0=0. The discretization process is performed using Dn and D′n respectively.

In [20], authors have introduced a notion of interpretability score based on the sum of the length of all the rules constituting the predictive model.

Furthermore, the value (8), which is a positive number, cannot be directly compared to the values from (6) and (7), which are between 0 and 1.

The measure of the simplicity is based on the definition 4.1. The idea is to compare (8) relatively to a set of algorithms Am1={A1,…,Am}. Hence the simplicity of an algorithm Ai∈Am1 is defined in relative terms as follows:

Like the previous ones, this quantity is a positive number between 0 and 1: If Ai generates the simplest predictor among the set of algorithms Am1 then Sn(Ai,Am1)=0. Then, the simplicity of other algorithms in Am1 are evaluated relatively to Ai.

where the coefficients α1,α2 and α3 have been chosen according to the statistician’s desiderata such that α1+α2+α3=1. If a statistician tries to understand and to describe a phenomenon then simplicity and predictivity are more important than stability.

The aim of this application is to compare four rule-based algorithms: the Decision Tree algorithm (DT) [6], RuleFit (RF) [12], the Covering Algorithm (CA) [20] and RICE [16]. Their parametrization is summarized in Table 1. For this application the same model as in [12] is considered. Two samples D1 and D2 of n=5000 data are generated following the regression setting:

was chosen to produce a two-to-one signal-to-noise ratio. The variables were generated from a uniform distribution on

Predictivity (6) is approximated using 50000 test observations and by averaging error of predictors generated from D1 and D2. The q-stability (7) is measured by setting q=10 and discretizing with respect to D1 and D2. Simplicity (9) of an algorithm is computed by averaging the measure on predictors generated from D1 and D2 respectively. Finally, the interpretability (10) is calculated with α1=α2=α3=1/3. The results are summarized in Table 2.

RICE and Covering Algorithm seem to be the most interpretable algorithms for this setting. However, the predictivity value of RICE is very poor compared to the other algorithms. Therefore, the Covering Algorithm is the most interpretable algorithm in this panel for the setting (11). Even if RuleFit is the best algorithm of this panel in predictivity and q-stability it generated too many rules and has therefore a weaker simplicity.

This methodology seems to make the interpretability comparison of rule-based algorithms quite fair. However, according to Definition 4.1, 100 rules of length 1 have the same simplicity that one single rule of length 100, which is debatable. Moreover, the stability measure is purely syntactic and rather restrictive. Indeed, if some features are duplicated, two rules may have two different syntactic conditions but by otherwise identical based in their activations. One way of relaxing this stability criterion could be to compare the rules, based on their activation sets (i.e. by looking to observations where conditions are met simultaneously). Finally, this comparison of interpretability between a set of algorithms makes only sense for rule-based algorithm. It could be interesting to extend it to other types of algorithms.