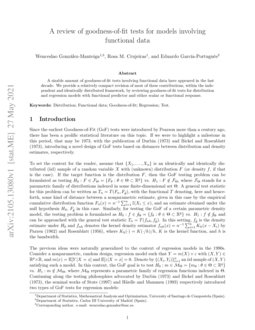 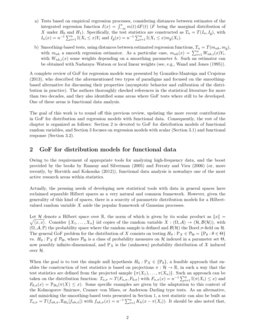 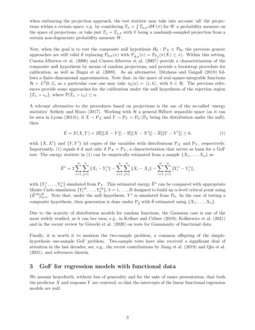 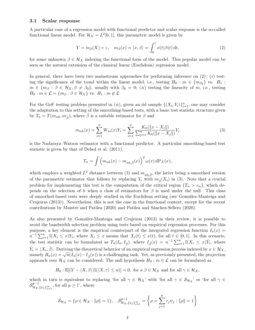 Functional linear models are one of the most fundamental tools to assess...
Eduardo García-Portugués, et al. ∙

Bayesian Goodness of Fit Tests: A Conversation for David Mumford

Since the earliest Goodness-of-Fit (GoF) tests were introduced by Pearson more than a century ago, there has been a prolific statistical literature on this topic. If we were to highlight a milestone in this period, that may be 1973, with the publication of Durbin (1973) and Bickel and Rosenblatt (1973)

, introducing a novel design of GoF tests based on distances between distribution and density estimates, respectively.

To set the context for the reader, assume that {X1,…,Xn}

X with (unknown) distribution F (or density f, if that is the case). If the target function is the distribution F, then the GoF testing problem can be formulated as testing H0:F∈FΘ={Fθ:θ∈Θ⊂Rq} vs. H1:F∉FΘ, where FΘ stands for a parametric family of distributions indexed in some finite-dimensional set Θ

. A general test statistic for this problem can be written as

Tn=T(Fn,F^θ), with the functional T

denoting, here and henceforth, some kind of distance between a nonparametric estimate, given in this case by the empirical cumulative distribution function

, and an estimate obtained under the null hypothesis

H0, F^θ in this case. Similarly, for testing the GoF of a certain parametric density model, the testing problem is formulated as H0:f∈\mathpzcfΘ={fθ:θ∈Θ⊂Rq} vs. H1:f∉\mathpzcfΘ and can be approached with the general test statistic Tn=T(fnh,f^θ). In this setting, f^θ is the density estimate under H0 and fnh

The previous ideas were naturally generalized to the context of regression models in the 1990s. Consider a nonparametric, random design, regression model such that Y=m(X)+ε with (X,Y)∈Rp×R, and m(x)=E[Y|X=x] and E[ε|X=x]=0. Denote by {(Xi,Yi)}ni=1 an iid sample of (X,Y) satisfying such a model. In this context, the GoF goal is to test H0:m∈MΘ={mθ:θ∈Θ⊂Rq} vs. H1:m∉MΘ, where MΘ represents a parametric family of regression functions indexed in Θ. Continuing along the testing philosophies advocated by Durbin (1973) and Bickel and Rosenblatt (1973), the seminal works of Stute (1997) and Härdle and Mammen (1993) respectively introduced two types of GoF tests for regression models:

A complete review of GoF for regression models was presented by González-Manteiga and Crujeiras (2013), who described the aforementioned two types of paradigms and focused on the smoothing-based alternative for discussing their properties (asymptotic behavior and calibration of the distribution in practice). The authors thoroughly checked references in the statistical literature for more than two decades, and they also identified some areas where GoF tests where still to be developed. One of these areas is functional data analysis.

Owing to the requirement of appropriate tools for analyzing high-frequency data, and the boost provided by the books by Ramsay and Silverman (2005) and Ferraty and Vieu (2006) (or, more recently, by Horváth and Kokoszka (2012)), functional data analysis is nowadays one of the most active research areas within statistics.

Actually, the pressing needs of developing new statistical tools with data in general spaces have reclaimed separable Hilbert spaces as a very natural and common framework. However, given the generality of this kind of spaces, there is a scarcity of parametric distribution models for a Hilbert-valued random variable X aside the popular framework of Gaussian processes.

the probability space where the random sample is defined and

B(H) the Borel σ-field on H. The general GoF problem for the distribution of X consists on testing H0:PX∈PΘ={Pθ:θ∈Θ} vs. H0:PX∉PΘ, where PΘ is a class of probability measures on H indexed in a parameter set Θ, now possibly infinite-dimensional, and PX

is the (unknown) probability distribution of

When the goal is to test the simple null hypothesis H0:PX∈{P0}, a feasible approach that enables the construction of test statistics is based on projections π:H→R, in such a way that the test statistics are defined from the projected sample {π(X1),…,π(Xn)}. Such an approach can be taken on the distribution function: Tn,π=T(Fn,π,F0,π) with Fn,π(x)=n−1∑ni=1I(π(Xi)≤x) and F0,π(x)=PH0(π(X)≤x). Some specific examples are given by the adaptation to this context of the Kolmogorov–Smirnov, Cramer–von Mises, or Anderson–Darling type tests. As an alternative, and mimicking the smoothing-based tests presented in Section 1, a test statistic can also be built as Tn,π=T(fnh,π,EH0[fnh,π]) with fnh,π(x)=n−1∑ni=1Kh(x−π(Xi)). It should be also noted that, when embracing the projection approach, the test statistic may take into account ‘all’ the projections within a certain space, e.g. by considering Tn=∫Tn,πdW(π) for W a probability measure on the space of projections, or take just Tn=Tn,^π with ^π being a randomly-sampled projection from a certain non-degenerate probability measure W.

Now, when the goal is to test the composite null hypothesis H0:PX∈PΘ, the previous generic approaches are still valid if replacing P0,π(x) with P^θ,π(x)=PP^θ(π(X)≤x). Within this setting, Cuesta-Albertos et al. (2006) and Cuesta-Albertos et al. (2007) provide a characterization of the composite null hypothesis by means of random projections, and provide a bootstrap procedure for calibration, as well as Bugni et al. (2009). As an alternative, Ditzhaus and Gaigall (2018) follows a finite-dimensional approximation. Note that, in the space of real square-integrable functions H=L2[0,1], as a particular case one may take πh(x)=⟨x,h⟩, with h∈H. The previous references provide some approaches for the calibration under the null hypothesis of the rejection region {Tn>cα}, where P(Tn>cα)≤α.

A relevant alternative to the procedures based on projections is the use of the so-called ‘energy statistics’ Székely and Rizzo (2017). Working with H a general Hilbert separable space (as it can be seen in Lyons (2013)), if X∼PX and Y∼PY=P0 (P0 being the distribution under the null), then

with {X,X′} and {Y,Y′} iid copies of the variables with distributions PX and PY, respectively. Importantly, (1) equals 0 if and only if PX=PY, a characterization that serves as basis for a GoF test. The energy statistic in (1) can be empirically estimated from a sample {X1,…,Xn} as

with {Y∗1,…,Y∗n} simulated from PY. This estimated energy ^E∗ can be compared with appropriate Monte Carlo simulation {Y∗b1,…,Y∗bn}, b=1,…,B designed to build an α-level critical point using {^E∗b}Bb=1. Note that, under the null hypothesis, Y∗ is simulated from P0. In the case of testing a composite hypothesis, then generation is done under P^θ with ^θ estimated using {X1,…,Xn}.

Due to the scarcity of distribution models for random functions, the Gaussian case is one of the most widely studied, as it can bee seen, e.g., in Kellner and Celisse (2019); Kolkiewicz et al. (2021) and in the recent review by Górecki et al. (2020) on tests for Gaussianity of functional data.

Finally, it is worth it to mention the two-sample problem, a common offspring of the simple-hypothesis one-sample GoF problem. Two-sample tests have also received a significant deal of attention in the last decades; see, e.g., the recent contributions by Jiang et al. (2019) and Qiu et al. (2021), and references therein.

We assume henceforth, without loss of generality and for the sake of easier presentation, that both the predictor X and response Y are centered, so that the intercepts of the linear functional regression models are null.

A particular case of a regression model with functional predictor and scalar response is the so-called functional linear model. For HX=L2[0,1]

, this parametric model is given by

for some unknown β∈HX indexing the functional form of the model. This popular model can be seen as the natural extension of the classical linear (Euclidean) regression model.

For the GoF testing problem presented in (ii), given an iid sample {(Xi,Yi)}ni=1, one may consider the adaptation to this setting of the smoothing-based tests, with a basic test statistic structure given by Tn=T(mnh,m^β), where ^β is a suitable estimator for β and

is the Nadaraya–Watson estimator with a functional predictor. A particular smoothing-based test statistic is given by that of Delsol et al. (2011),

which employs a weighted L2 distance between (3) and mnh,^β, the latter being a smoothed version of the parametric estimator that follows by replacing Yi with m^β(Xi) in (3). Note that a crucial problem for implementing this test is the computation of the critical region {Tn>cα}, which depends on the selection of h when a class of estimators for β is used under the null. This class of smoothed-based tests were deeply studied in the Euclidean setting (see González-Manteiga and Crujeiras (2013)). Nevertheless, this is not the case in the functional context, except for the recent contributions by Maistre and Patilea (2020) and Patilea and Sánchez-Sellero (2020).

As also presented by González-Manteiga and Crujeiras (2013) in their review, it is possible to avoid the bandwidth selection problem using tests based on empirical regression processes. For this purpose, a key element is the empirical counterpart of the integrated regression function In(x)=n−1∑ni=1I(Xi≤x)Yi, where Xi≤x means that Xi(t)≤x(t), for all t∈[0,1]. In this scenario, the test statistic can be formulated as Tn(In,I^β), where I^β(x)=n−1∑ni=1I(Xi≤x)^Yi, where ^Yi=⟨Xi,^β⟩. Deriving the theoretical behavior of an empirical regression process indexed by x∈HX, namely Rn(x)=√n(In(x)−I^β(x)) is a challenging task. Yet, as previously presented, the projection approach over HX can be considered. The null hypothesis H0:m∈L can be formulated as

are infinite- and finite-dimensional spheres on HX, {ψj}∞j=1 is an orthonormal basis for HX, and {rj}pj=1⊂R. As follows from García-Portugués et al. (2014), a general test statistic can be built aggregating all the projections within a certain subspace: Tn=∫Tn,πdW(π) with Tn,π=T(In,π,I^β,π) based on

for π(x)=⟨x,γ⟩. In this case, W is a probability measure defined in SHX or Sp−1HX,{ψj}∞j=1, for a certain p≥1. Alternatively, the test statistic can be based on only one random projection: Tn=Tn,^π. More generally, Tn may consider the aggregation of a finite number of random projections, as advocated in the test statistic of Cuesta-Albertos et al. (2019). Both types of tests, all-projections and finite-random-projections, may feature several distances for T, such as Kolmogorov–Smirnov or Cramér–von Mises types.

Model (2) can be generalized to include a more flexible trend component, for instance, with an additive formulation. The functional generalized additive model (see McLean et al. (2015)) is formulated as

are unknown tensor product B-spline coefficients. Both for the

Model (5) can be written in an approximated way as a linear model with random effects (see Yasemin-Tekbudak et al. (2019)) using the evaluations of Xi(tin) over a grid {tin}⊂[0,1]. Under the assumption of ε being a Gaussian process, the so-called restricted likelihood ratio test (RLRT) can be used, where testing the GoF of the functional linear model (2) against model specifications within (5

) is equivalent to test that the variance of the random effect is null.

Cov(t,s), model (6) can be written as a kind of linear model, were the null hypothesis γ=0 is tested.

a random element with joint distribution

As noted by Lai et al. (2020), the generalized distance covariance can be alternatively written as

All the tests described in this section have challenging limit distributions and need to be calibrated with resampling techniques.

When both the predictor and the response, X and Y, are functional random variables evaluated in HX=L2[a,b] and HY=L2[c,d], the regression model Y=m(X)+ε is related with the operator m:HX→HY. Perhaps the most popular operator specification is a (linear) Hilbert–Schmidt integral operator, expressible as

for β∈HX⊗HY, which is simply referred to as the functional linear model with functional response. The kernel β can be represented as β=∑∞j=1∑∞k=1bjk(ψj⊗ϕk), with {ψj}∞j=1 and {ϕk}∞k=1 being orthonormal bases of HX and HY, respectively.

The above generalization to the case of functional response is certainly more difficult for the class of tests based on the likelihood ratios. Regarding the smoothing-based tests, Patilea et al. (2016) introduced a kernel-based significance test consistent for nonlinear alternative. More recently, Lee et al. (2020) proposed a significance test based on correlation distance ideas.