A Review of Changepoint Detection Models 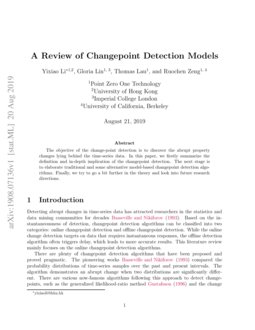 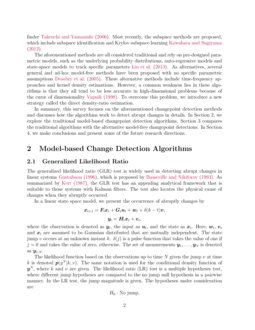 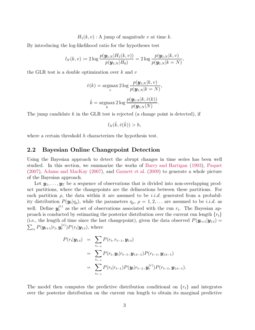 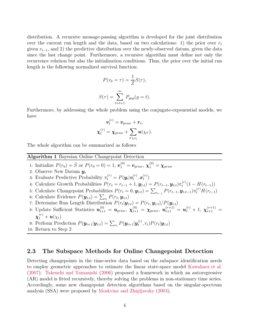 Shape-CD: Change-Point Detection in Time-Series Data with Shapes and Neurons

A Survey of Refactoring Detection Techniques Based on Change History Analysis

Refactoring is the process of changing a software system in such a way t...
Eunjong Choi, et al. ∙

Change detection (CD) in time series data is a critical problem as it re...
Prithwish Chakraborty, et al. ∙

There are plenty of changepoint detection algorithms that have been proposed and proved pragmatic. The pioneering works Basseville and Nikiforov (1993)

compared the probability distributions of time-series samples over the past and present intervals. The algorithm demonstrates an abrupt change when two distributions are significantly different. There are various now-famous algorithms following this approach to detect changepoints, such as the generalized likelihood-ratio method

Gustafsson (1996) and the change finder Takeuchi and Yamanishi (2006). Most recently, the subspace methods are proposed, which include subspace identification and Krylov subspace learning Kawahara and Sugiyama (2012).

The aforementioned methods are all considered traditional and rely on pre-designed parametric models, such as the underlying probability distributions, auto-regressive models and state-space models to track specific parameters

. These alternative methods include time-frequency approaches and kernel density estimations. However, a common weakness lies in these algorithms is that they all tend to be less accurate in high-dimensional problems because of the curse of dimensionality

Vapnik (1998). To overcome this problem, we introduce a new strategy called the direct density-ratio estimation.

The generalized likelihood ratio (GLR) test is widely used in detecting abrupt changes in linear systems Gustafsson (1996), which is proposed by Basseville and Nikiforov (1993). As summarized by Kerr (1987)

, the GLR test has an appealing analytical framework that is suitable to those systems with Kalman filters. The test also locates the physical cause of changes when they abruptly occurred.

In a linear state space model, we present the occurrence of abruptly changes by

where the observation is denoted as yt, the input as ut, and the state as xt. Here, wt, et and xt

are assumed to be Gaussian distributed that are mutually independent. The state jump

The likelihood function based on the observations up to time N given the jump ν at time k is denoted p(yN|k,v). The same notation is used for the conditional density function of yN, where k and ν

are given. The likelihood ratio (LR) test is a multiple hypotheses test, where different jump hypotheses are compared to the no jump null hypothesis in a pairwise manner. In the LR test, the jump magnitude is given. The hypotheses under consideration are

By introducing the log-likelihood ratio for the hypotheses test

the GLR test is a double optimization over k and v

The jump candidate k in the GLR test is rejected (a change point is detected), if

where a certain threshold h characterizes the hypothesis test.

Using the Bayesian approach to detect the abrupt changes in time series has been well studied. In this section, we summarize the works of Barry and Hartigan (1993), Paquet (2007), Adams and MacKay (2007), and Garnett et al. (2009) to generate a whole picture of the Bayesian approach.

Let y1,…,yT be a sequence of observations that is divided into non-overlapping product partitions, where the changepoints are the delineations between these partitions. For each partition ρ, the data within it are assumed to be i.i.d. generated from a probability distribution P(yt|ηρ), while the parameters ηρ, ρ=1,2,… are assumed to be i.i.d. as well. Define y(r)t as the set of observations associated with the run rt. The Bayesian approach is conducted by estimating the posterior distribution over the current run length {rt} (i.e., the length of time since the last changepoint), given the data observed P(yt+1|y1:t)=∑rtP(yt+1|rt,y(r)t)P(rt|y1:t), where

The model then computes the predictive distribution conditional on {rt}

rt given rt−1, and 2) the predictive distribution over the newly-observed datum, given the data since the last change point. Furthermore, a recursive algorithm must define not only the recurrence relation but also the initialization conditions. Thus, the prior over the initial run length is the following normalized survival function:

Furthermore, by addressing the whole problem using the conjugate-exponential models, we have

The whole algorithm can be summarized as follows

Detecting changepoints in the time-series data based on the subspace identification needs to employ geometric approaches to estimate the linear state-space model Kawahara et al. (2007). Takeuchi and Yamanishi (2006) proposed a framework in which an autoregressive (AR) model is fitted recursively, thereby solving the problems in non-stationary time series. Accordingly, some new changepoint detection algorithms based on the singular-spectrum analysis (SSA) were proposed by Moskvinz and Zhigljavsky (2003).

yt∈Rp,t=1,2,…, which models the signal of the unknown stochastic system as a discrete-time linear state-space system:

x∈Rn is a state vector, v∈Rn and w∈Rp are the system and observation noises respectively, while A∈Rn×n and C∈Rp×n are the system matrices. The key problem solved by the subspace identification is the consistent estimation of the column space of the extended observability matrix.

Once the extended observability matrix is obtained, we can derive the system matrices and the Kalman gain by substituting the above equations with

where et is an innovation process (the error process of the model) and K is the stationary Kalman gain. Thus, we obtain the extended observability matrix as

where the suffix p denotes the past and f denotes the future and the covariance matrices are computed using the matrices obtained by the LQ factorization, respectively.

A subsequence can be expressed as

where Ψk is defined as

Moreover, by aligning the above equation according to the structure of a Hankel metrics

Hence, the subspace spanned by the column vectors of Yk,N(t) is equivalent to the spans of Ok plus Ψk. Then the following distance, which quantifies the gap between subspaces, can be used as a measure of the changepoint in the time-series

where U(1) is computed by the SVD of the extended observability matrix Ok, which is estimated by the subspace identification using the data in the reference interval O(1)k=U(1)S(1)(V(1))⊤. The procedure for change-point detection can be outlined as follows:

be a time series of independent random variables. The change point detection based on the observed sample

To conduct the kernel changepoint analysis, the running-maximum-partition strategy is employed based on a reproduced kernel Hilbert space. Let (χ,d) be a separable measurable metric space, and y be a χ-valued random variable with probability measure P. The expectation with respect to P is denoted by E[⋅] while the covariance matrix is denoted by Cov(⋅,⋅). Consider a reproducing kernel Hilbert space (RKHS) of function χ→R, the model makes the following two assumptions on the kernel: 1) the kernel τ is bounded, i.e. sup(x,y)∈χ×χτ(x,y)<∞, 2) for all probability distributions P, the RKHS associated with τ(⋅,⋅) is dense in L2(P).

An efficient strategy for conducting the changepoint analysis is to select the partition of sample. The partition yields a maximum heterogeneity between a sample y1,…,yn and a candidate change point k with interval (1,n). Assume that we can compute a measure of heterogeneity Δn,k between the segments y1,…,yk as well as the yk+1,…,yn, then the €œrunning-maximum-partition strategy€ consists in using max Δn,k as a building block for changepoint analysis.

Consider a sequence of independent observations y1,…,yn∈χ. For any [i,j]⊂{2,…,n−1}, the corresponding empirical mean elements and covariance operators as follows

For all k∈{2,…,n−1} the maximum kernel Fisher discriminant ratio (KFDR), is defined as

This model applies the running-maximum-partition strategy to obtain the building block of the test statistic for change-point analysis. Define the kernel test statistic

are the normalizing constants for Tn;γ(k)

to have zero-mean and unit-variance as

The aforementioned model-free changepoint detection algorithms tend to be less accurate in high-dimensional problems because of the curse of dimensionality Vapnik (1998). To solve the problem, we introduce a new strategy called the direct density-ratio estimation, which estimates the ratio of probability densities directly without going through density estimation Liu et al. (2013). Following this idea, models such as the Kullback-Leibler importance estimation procedure (KLIEP) were established Kawahara and Sugiyama (2012).

Let y(t) be a dimensional time series sample at time t. The goal of this model is to detect whether there exists a changepoint between two consecutive time intervals, which is called the reference and test intervals. Let Yt be the forward subsequence of length k at time t

Thus, the likelihood ratio of the sequence sample Y is

are the probability density functions of the reference and test sequence samples, respectively. Let

The likelihood ratio between the hypotheses H0 and H1 is

Therefore, the model could decide whether there exits a change point between the reference and test intervals by monitoring the logarithm of the likelihood ratio

Based on the logarithm of the likelihood ratio s(Y), the model could detect change occurs if S≤μ. Thus, we can obtain the density ratio as

The model solves this problem by using the KLIEP. The KLIEP first models the density ratio w(Y) by using a non-parametric Gaussian kernel model

where {αl} are the parameters to be fitted from samples, and Kσ(Y,Y′) is the Gaussian kernel function with mean Y′

The equality constraint in the above optimization problem comes from the requirement that ^w(Y) should be properly normalized as ^pte(Y) (= prf(Y)^w(Y)) ,which is a probability density function. The non-negativity constraint reflects the non-negativity of the density ratio function. After solving this optimization problem by arcane procedures, one can detect the change points in a data series by the following algorithm:

Changepoint detection has always been a subject worth of studying and exploring. There is a flourish of old literature and traditional models devoted to this subject. Throughout these years, more and more new methodologies have been introduced to tackle the abrupt changes in data series. In this literature review, we have summarized a portion of the most famous and effective methods to detect change point. As for future research directions, the academia is now heading to find more methods based on non-parametric model-free algorithms to detect change points, such as the single spectrum method, direct density estimation method, etc.