We revisit the Thompson sampling algorithm to control an unknown linear quadratic (LQ) system recently proposed by Ouyang et al (arXiv:1709.04047). The regret bound of the algorithm was derived under a technical assumption on the induced norm of the closed loop system. In this technical note, we show that by making a minor modification in the algorithm (in particular, ensuring that an episode does not end too soon), this technical assumption on the induced norm can be replaced by a milder assumption in terms of the spectral radius of the closed loop system. The modified algorithm has the same Bayesian regret of 𝒪̃(√(T)), where T is the time-horizon and the 𝒪̃(·) notation hides logarithmic terms in T. 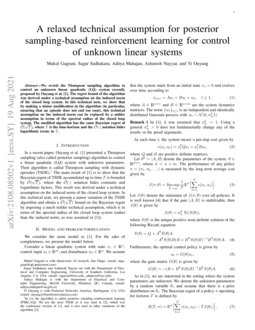 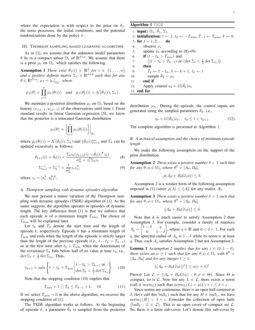 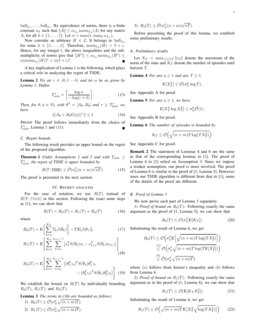 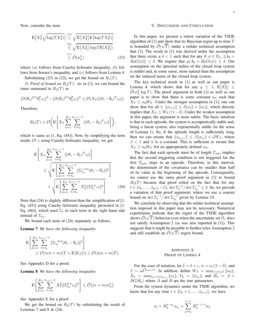 This is a brief technical note to clarify some of the issues with applyi...
Ian Osband, et al. ∙

Recent literature has made much progress in understanding online LQR: a ...
Max Simchowitz, et al. ∙

We revisit the classic online portfolio selection problem, where at each...
Zakaria Mhammedi, et al. ∙

In a recent paper, Ouyang et al. [1] presented a Thompson sampling (also called posterior sampling) algorithm to control a linear quadratic (LQ) system with unknown parameters. Their algorithm is called Thompson sampling with dynamic episodes (TSDE).111In [1], the algorithm is called posterior sampling reinforcement learning (PSRL-LQ). We use the term TSDE as it was used in [2], which was the conference version of [1], and is also used in other variations of the algorithm [3]. The main result of [1] is to show that the Bayesian regret of TSDE accumulated up to time T is bounded by ~O(√T), where the ~O(⋅) notation hides constants and logarithmic factors. This result was derived under a technical assumption on the induced norm of the closed loop system. In this technical note, we present a minor variation of the TSDE algorithm and obtain a ~O(√T) bound on the Bayesian regret by imposing a much milder technical assumption, which is in terms of the spectral radius of the closed loop system (rather than the induced norm, as was assumed in [1]).

We consider the same model as [1]. For the sake of completeness, we present the model below.

Consider a linear quadratic system with state xt∈Rn, control input ut∈Rm, and disturbance wt∈Rn. We assume that the system starts from an initial state x1=0 and evolves over time according to

where A∈Rn×n and B∈Rn×m are the system dynamics matrices. The noise {wt}t≥1 is an independent and identically distributed Gaussian process with wt∼N(0,σ2wI).

In [1], it was assumed that σ2w=1. Using a general σ2w>0 does not fundamentally change any of the results or the proof arguments. □

At each time t, the system incurs a per-step cost given by

where Q and R are positive definite matrices.

where S(θ) is the unique positive semi-definite solution of the following Riccati equation:

where the gain matrix G(θ) is given by

, we are interested in the setting where the system parameters are unknown. We denote the unknown parameters by a random variable

θ1 and assume that there is a prior distribution on θ1. The Bayesian regret of a policy π operating for horizon T is defined by

where the expectation is with respect to the prior on θ1, the noise processes, the initial conditions, and the potential randomizations done by the policy π.

We maintain a posterior distribution μt on Ω1 based on the history (x1:t−1,u1:t−1) of the observations until time t. From standard results in linear Gaussian regression [5]

, we know that the posterior is a truncated Gaussian distribution

We now present a minor variation of the Thompson sampling with dynamic episodes (TSDE) algorithm of [1]. As the name suggests, the algorithm operates in episodes of dynamic length. The key difference from [1] is that we enforce that each episode is of a minimum length Tmin. The choice of Tmin will be explained later.

Let tk and Tk denote the start time and the length of episode k, respectively. Episode k has a minimum length of Tmin and ends when the length of the episode is strictly larger than the length of the previous episode (i.e., t−tk>Tk−1) or at the first time after tk+Tmin when the determinant of the covariance Σt falls below half of its value at time tk, i.e., detΣt<12detΣtk. Thus,

Note that the stopping condition (10) implies that

If we select Tmin=0 in the above algorithm, we recover the stopping condition of [1].

The TSDE algorithm works as follows. At the beginning of episode k, a parameter ¯θk is sampled from the posterior distribution μtk. During the episode, the control inputs are generated using the sampled parameters ¯θk, i.e.,

The complete algorithm is presented in Algorithm 1.

We make the following assumption on the support of the prior distribution.

Assumption III-B is a weaker form of the following assumption imposed in [1] (since ρ(A)≤||A|| for any matrix A).

Since norms are continuous, there is an open ball centered at L (let’s call this ballL) such that for any H∈ballL, we have normL(H)<δ+ε. Consider the collection of open balls {ballL:L∈L}. This is an open cover of compact set L. So, there is a finite sub-cover. Let’s denote this sub-cover by ballL1,…,ballLℓ. By equivalence of norms, there is a finite constant αk such that ∥A∥≤αLknormLk(A) for any matrix A, for all k∈{1,…,ℓ}. Let α=max(1,maxkαLk).

Now consider an arbitrary H∈L. It belongs to ballLk for some k∈{1,…,ℓ}. Therefore, normLk(H)<δ+ε. Hence, for any integer t, the above inequalities and the submulitplicity of norms give that ∥Ht∥≤αLknormLk(Ht)≤α(normLk(H))t<α(δ+ε)t. ■

A key implication of Lemma 1 is the following, which plays a critical role in analyzing the regret of TSDE.

The proof follows immediately from the choice of T∗min, Lemma 1 and (11). ■

The following result provides an upper bound on the regret of the proposed algorithm.

Under Assumptions III and III-B and with Tmin≥T∗min, the regret of TSDE is upper bounded by

The proof is presented in the next section.

For the ease of notation, we use R(T) instead of R(T;TSDE) in this section. Following the exact same steps as [1], we can show that

Before presenting the proof of this lemma, we establish some preliminary results.

Let XT=max1≤t≤T∥xt∥ denote the maximum of the norm of the state and KT denote the number of episodes until horizon T.

See Appendix A for proof.

See Appendix B for proof.

The number of episodes is bounded by

The statement of Lemmas 4 and 6 are the same as that of the corresponding lemmas in [1]. The proof of Lemma 4 in [1] relied on Assumption III-B. Since we impose a weaker assumption, our proof is more involved. The proof of Lemma 6 is similar to the proof of [1, Lemma 3]. However, since our TSDE algorithm is different from that in [1], some of the details of the proof are different. □

We now prove each part of Lemma 3 separately.

Following exactly the same argument as the proof of [1, Lemma 5], we can show that

Substituting the result of Lemma 6, we get

Following exactly the same argument as in the proof of [1, Lemma 6], we can show that

Substituting the result of Lemma 6, we get

Note that (24) is slightly different than the simplification of [1, Eq. (45)] using Cauchy-Schwartz inequality presented in [1, Eq. (46)], which used Σt in each term in the right hand side instead of Σtk.

We bound each term of (24) separately as follows.

We have the following inequality

See Appendix D for a proof.

We have the following inequality

See Appendix E for a proof.

In this paper, we present a minor variation of the TSDE algorithm of [1] and show that its Bayesian regret up to time T is bounded by ~O(√T) under a milder technical assumption that [1]. The result in [1] was derived under the assumption that there exists a δ<1 such that for any θ,ϕ∈Ω1, ∥Aθ+BθG(ϕ)∥≤δ. We require that ρ(Aθ+BθG(ϕ))≤δ. Our assumption on the sprectral radius of the closed loop system is milder and, in some sense, more natural than the assumption on the induced norm of the closed loop system.

The key technical result in [1] as well as our paper is Lemma 4, which shows that for any q≥1, E[XqT]≤~O(σ2wlogT). The proof argument in both [1] as well as our paper is to show that there is some constant α0 such that XT≤α0WT. Under the stronger assumption in [1], one can show that for all t, ∥xt+1∥≤δ∥xt∥+∥wt∥, which directly implies that XT≤WT/(1−δ). Under the weaker assumption in this paper, the argument is more subtle. The basic intuition is that in each episode, the system is asymptotically stable and, being a linear system, also exponentially stable (in the sense of Lemma 1). So, if the episode length is sufficiently long, then we can ensure that ∥xtk+1∥≤β∥xtk∥+¯αWT, where β<1 and ¯α is a constant. This is sufficient to ensure that XT≤α0WT for an appropriately defined α0.

The fact that each episode must be of length Tmin implies that the second triggering condition is not triggered for the first Tmin steps in an episode. Therefore, in this interval, the determinant of the covariance can be smaller than half of its value at the beginning of the episode. Consequently, we cannot use the same proof argument as [1] to bound R2(T) because that proof relied on the fact that for any t∈{tk,…,tk+1−1}, detΣ−1t/detΣ−1tk≤2. So, we provide a variation of that proof argument, where we use a coarser bound on detΣ−1t/detΣ−1tk given by Lemma 10.

We conclude by observing that the milder technical assumption imposed in this paper may not be necessary. Numerical experiments indicate that the regret of the TSDE algorithm shows ~O(√T) behavior even when the uncertainty set Ω1 does not satisfy Assumption III-B (as was also reported in [1]). This suggests that it might be possible to further relax Assumption III-B and still establish an ~O(√T) regret bound.

Appendix A Proof of Lemma 4

From the system dynamics under the TSDE algorithm, we know that for any time t∈{tk+1,…,tk+1}, we have

Thus, from triangle inequality and Lemma 1, we get

where the second inequality follows from (11), which implies α¯δTk≤α¯δTmin+1\eqqcolonβ. Recursively expanding (26), we get

where in the last inequality, we have used the fact that ¯δ∈(0,1). Thus, for any episode k, we have

Therefore, for any q≥1, we have

Substituting this is (28), we obtain the result of the lemma.

Appendix B Proof of Lemma 5

where the last inequality follows from Cauchy-Schwartz inequality. Since (logx)2 is concave for x≥e, we can use Jensen’s inequality to write

where the last equality follows from (11). Hence, by following exactly the same argument as [1], we have

where (a) follows because {detΣ−1t}t≥1 is a non-decreasing sequence (because Σ−11≤Σ−12…) and (b) and subsequent inequalities follow from the definition of the macro episode and the second triggering condition.

Then following the same idea as the rest of the proof in [1], we get

Observe that the summand is constant for each episode. Therefore,