In this paper, we present a recipe for building a good Arabic-English neural machine translation. We compare neural systems with traditional phrase-based systems using various parallel corpora including UN, ISI and Ummah. We also investigate the importance of special preprocessing of the Arabic script. The presented results are based on test sets from NIST MT 2005 and 2012. The best neural system produces a gain of +13 BLEU points compared to an equivalent simple phrase-based system in NIST MT12 test set. Unexpectedly, we find that tuning a model trained on the whole data using a small high quality corpus like Ummah gives a substantial improvement (+3 BLEU points). We also find that training a neural system with a small Arabic-English corpus is competitive to a traditional phrase-based system. 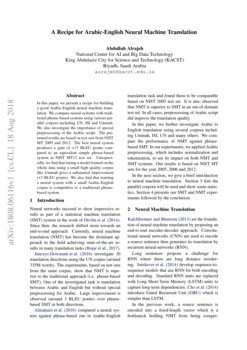 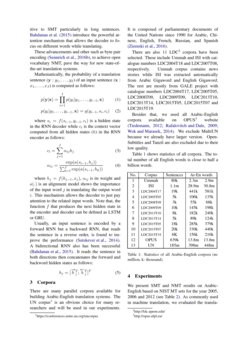 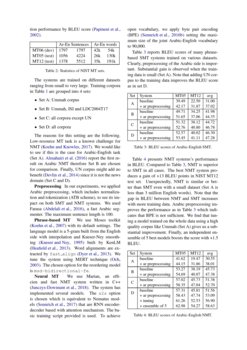 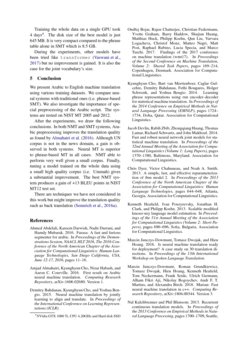 Junczys-Dowmunt et al. (2016) investigate 30 translation directions using the UN corpus (around 335M words). The experiments, based on test sets from the same corpus, show that NMT is superior to the traditional approach (i.e. phrase-based SMT). One of the investigated task is translation between Arabic and English but without special preprocessing for Arabic. Large improvement is observed (around 3 BLEU points) over phrase-based SMT in both directions.

Almahairi et al. (2016) compared a neural system against phrase-based one in Arabic-English translation task and found them to be comparable based on NIST 2005 test set. It is also observed that NMT is superior to SMT in an out-of-domain test set. In all cases, preprocessing of Arabic script did improve the translation quality.

In this paper, we further investigate Arabic to English translation using several corpora including Ummah, ISI, UN and many others. We compare the performance of NMT against phrase-based SMT. In our experiments, we applied Arabic preprocessing, which includes normalization and tokenization, to see its impact on both NMT and SMT systems. Our results is based on NIST MT sets for the year 2005, 2006 and 2012.

In the next section, we give a brief introduction to neural machine translation. Section 3 lists the parallel corpora will be used and show some statistics. Section 4 presents our SMT and NMT experiments followed by the conclusion.

Long sentences propose a challenge for RNN where there are long distance reordering. Sutskever et al. (2014)

develop sequence-to-sequence models that use RNN for both encoding and decoding. Standard RNN units are replaced with Long Short-Term Memory (LSTM) units to capture long-term dependencies.

introduce Gated Recurrent Unit (GRU) which is simpler than LSTM.

In the previous work, a source sentence is encoded into a fixed-length vector which is a bottleneck holding NMT from being competitive to SMT particularly in long sentences.

Bahdanau et al. (2015) introduce the powerful attention mechanism that allows the decoder to focus on different words while translating.

These advancements and other such as byte pair encoding Sennrich et al. (2016b), to achieve open vocabulary NMT, pave the way for new state-of-the-art translation systems.

Mathematically, the probability of a translation sentence (

where si=f(si−1,yi−1,ci) is a hidden state in the RNN decoder while ci is the context vector computed from all hidden states (h) in the RNN encoder as follows:

where hj=f(hj−1,xj), αij is its weight and a(.) is an alignment model shows the importance of the input word j in translating the output word i. This mechanism allows the decoder to just pay attention to the related input words. Note that, the function f that produces the next hidden state in the encoder and decoder can be defined as LSTM or GRU.

There are many parallel corpora available for building Arabic-English translation systems. The UN corpus111https://conferences.unite.un.org/uncorpus is an obvious choice for many researchers and will be used in our experiments. It is composed of parliamentary documents of the United Nations since 1990 for Arabic, Chinese, English, French, Russian, and Spanish Ziemski et al. (2016).

Besides that, we used all Arabic-English corpora available on OPUS333http://opus.nlpl.eu/ website Tiedemann (2012); Rafalovitch and Dale (2009); Wołk and Marasek (2014). We exclude MultiUN because we already have larger version. OpenSubtitles and Tanzil are also excluded due to their low quality.

Table 1 shows statistics of all corpora. The total number of all English words is close to half a billion words.

We present SMT and NMT results on Arabic-English based on NIST MT sets for the year 2005, 2006 and 2012 (see Table 2). As commonly used in machine translation, we evaluated the translation performance by BLEU score (Papineni et al., 2002).

The systems are trained on different datasets ranging from small to very large. Training corpora in Table 1 are grouped into 4 sets:

The reasons for this setting are the following. Low-resource MT task is a known challenge for NMT Koehn and Knowles (2017). We would like to see if this is the case for Arabic-English task (Set A). Almahairi et al. (2016) report the first result on Arabic NMT therefore Set B are chosen for comparison. Finally, UN corpus might add no benefit Devlin et al. (2014) since it is not the news domain (Set C and D).

Preprocessing   In our experiments, we applied Arabic preprocessing, which includes normalization and tokenization (ATB scheme), to see its impact on both SMT and NMT systems. We used Farasa Abdelali et al. (2016), a fast Arabic segmenter. The maximum sentence length is 100.

with its default settings. The language model is a 5-gram built from the English side with interpolation and Kneser-Ney smoothing

Neural MT   We use Marian, an efficien and fast NMT system written in C++ Junczys-Dowmunt et al. (2018). The system has implemented several models. The s2s option is chosen which is equivalent to Nematus models Sennrich et al. (2017) that are RNN encoder-decoder based with attention mechanism. The basic training script provided is used. To achieve open vocabulary, we apply byte pair encoding (BPE) Sennrich et al. (2016b) setting the maximum size of the joint Arabic-English vocabulary to 90,000.

Table 3 reports BLEU scores of many phrase-based SMT systems trained on various datasets. Clearly, preprocessing of the Arabic side is important. Substantial gain is observed when the training data is small (Set A). Note that adding UN corpus to the training data improves the BLEU score as in set D.

Table 4 presents NMT systems’s performance in BLEU. Compared to Table 3, NMT is superior to SMT in all cases. The best NMT system produces a gain of +13 BLEU points in NIST MT12 test set. Unexpectedly, NMT is similar or better than SMT even with a small dataset (Set A is less than 3 million English words). Note that the gap in BLEU between NMT and SMT increases with more training data. Arabic preprocessing improves the performance as in Table 3 which indicates that BPE is not sufficient. We find that tuning a model trained on the whole data using a high quality corpus like Ummah (Set A) gives us a substantial improvement. Finally, an independent ensemble of 5 best models boosts the score with +1.5 BLEU.

Training the whole data on a single GPU took 4 days444NVidia GTX 1080 Ti, CPU 4.20GHz and Hard disk SSD. The disk size of the best model is just 645 MB. It is very compact compared to the phrase table alone in SMT which is 8.5 GB.

During the experiments, other models have been tried like transformer Vaswani et al. (2017) but no improvement is gained. It is also the case for the joint vocabulary’s size.

We present Arabic to English machine translation using various training datasets. We compare neural systems with traditional ones (i.e. phrase-based SMT). We also investigate the importance of special preprocessing of the Arabic script. The systems are tested on NIST MT 2005 and 2012.

After the experiments, we draw the following conclusions. In both NMT and SMT systems, Arabic preprocessing improves the translation quality as found by Almahairi et al. (2016). Although UN corpus is not in the news domain, a gain is observed in both systems. Neural MT is superior to phrase-based MT in all cases. NMT able to perform very well given a small corpus. Finally, tuning a model trained on the whole data using a small high quality corpus (i.e. Ummah) gives a substantial improvement. The best NMT system produces a gain of +13 BLEU points in NIST MT12 test set.

There are techniques we have not considered in this work but might improve the translation quality such as back translation Sennrich et al. (2016a).