In this paper, we discuss the problem of minimizing the sum of two convex functions: a smooth function plus a non-smooth function. Further, the smooth part can be expressed by the average of a large number of smooth component functions, and the non-smooth part is equipped with a simple proximal mapping. We propose a proximal stochastic second-order method, which is efficient and scalable. It incorporates the Hessian in the smooth part of the function and exploits multistage scheme to reduce the variance of the stochastic gradient. We prove that our method can achieve linear rate of convergence. 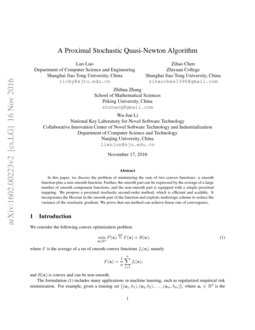 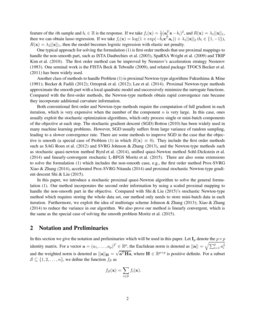 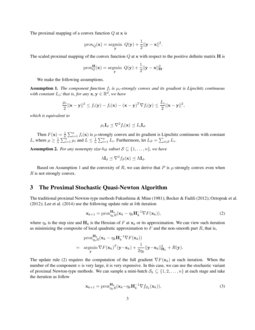 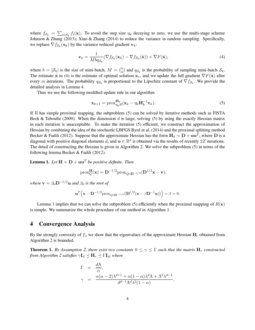 where F is the average of a set of smooth convex functions fi(x), namely

and R(x) is convex and can be non-smooth.

) includes many applications in machine learning, such as regularized empirical risk minimization. For example, given a training set

, then we can obtain lasso regression. If we take

, then the model becomes logistic regression with elastic net penalty.

One typical approach for solving the formulation (1) is first order methods that use proximal mappings to handle the non-smooth part, such as ISTA Daubechies et al. (2003), SpaRSA Wright et al. (2009) and TRIP Kim et al. (2010). The first order method can be improved by Nesterov’s acceleration strategy Nesterov (1983). One seminal work is the FISTA Beck & Teboulle (2009), and related package TFOCS Becker et al. (2011) has been widely used.

Both conventional first order and Newton-type methods require the computation of full gradient in each iteration, which is very expensive when the number of the component n

is very large. In this case, ones usually exploit the stochastic optimization algorithms, which only process single or mini-batch components of the objective at each step. The stochastic gradient descent (SGD)

Bottou (2010) has been widely used in many machine learning problems. However, SGD usually suffers from large variance of random sampling, leading to a slower convergence rate. There are some methods to improve SGD in the case that the objective is smooth (a special case of Problem (1) in which R(x)≡0). They include the first order methods such as SAG Roux et al. (2012) and SVRG Johnson & Zhang (2013), and the Newton-type methods such as stochastic quasi-newton method Byrd et al. (2014), unified quasi-Newton method Sohl-Dickstein et al. (2014) and linearly-convergent stochastic L-BFGS Moritz et al. (2015). There are also some extensions to solve the formulation (1) which includes the non-smooth case, e.g., the first order method Prox-SVRG Xiao & Zhang (2014), accelerated Prox-SVRG Nitanda (2014) and proximal stochastic Newton-type gradient descent Shi & Liu (2015).

In this paper, we introduce a stochastic proximal quasi-Newton algorithm to solve the general formulation (1). Our method incorporates the second order information by using a scaled proximal mapping to handle the non-smooth part in the objective. Compared with Shi & Liu (2015)’s stochastic Newton-type method which requires storing the whole data set, our method only needs to store mini-batch data in each iteration. Furthermore, we exploit the idea of multistage scheme Johnson & Zhang (2013); Xiao & Zhang (2014) to reduce the variance in our algorithm. We also prove our method is linearly convergent, which is the same as the special case of solving the smooth problem Moritz et al. (2015).

In this section we give the notation and preliminaries which will be used in this paper. Let Ip denote the p×pidentity matrix. For a vector a=(a1,…,ap)T∈Rp, the Euclidean norm is denoted as ||a||=√∑pi=1a2i and the weighted norm is denoted as ||a||H=√aTHa, where H∈Rp×p is positive definite. For a subset S⊆{1,2,…,n}, we define the function fS as

The proximal mapping of a convex function Q at x is

We make the following assumptions.

The component function fi is μi-strongly convex and its gradient is Lipschitz continuous with constant Li; that is, for any x,y∈Rd, we have

where ηk is the step size and Hk is the Hessian of F at xk or its approximation. We can view such iteration as minimizing the composite of local quadratic approximation to F and the non-smooth part R, that is,

The update rule (2) requires the computation of the full gradient ∇F(xk) at each iteration. When the number of the component n is very large, it is very expensive. In this case, we can use the stochastic variant of proximal Newton-type methods. We can sample a mini-batch Sk⊆{1,2,…,n} at each stage and take the iteration as follow

where fSk=∑i∈Skfi(x). To avoid the step size ηk decaying to zero, we use the multi-stage scheme Johnson & Zhang (2013); Xiao & Zhang (2014) to reduce the variance in random sampling. Specifically, we replace ∇fSk(xk) by the variance reduced gradient vk:

is the probability of sampling mini-batch

~x in (4) is the estimate of optimal solution x∗, and we update the full gradient ∇F(~x) after every m iterations. The probability qSk is proportional to the Lipschitz constant of ∇fSk. We provide the detailed analysis in Lemma 4.

Thus we use the following modified update rule in our algorithm

If R has simple proximal mapping, the subproblem (5) can be solved by iterative methods such as FISTA Beck & Teboulle (2009). When the dimension d is large, solving (5) by using the exactly Hessian matrix in each iteration is unacceptable. To make the iteration (5) efficient, we construct the approximation of Hessian by combining the idea of the stochastic LBFGS Byrd et al. (2014) and the proximal splitting method Becker & Fadili (2012). Suppose that the approximate Hessian has the form Hk=D+uuT, where D is a diagonal with positive diagonal elements di and u∈Rd is obtained via the results of recently 2Z iterations. The detail of constructing the Hessian is given in Algorithm 2. We solve the subproblem (5) in terms of the following lemma Becker & Fadili (2012).

Let H=D+uuT be positive definite. Then

Lemma 1 implies that we can solve the subproblem (5) efficiently when the proximal mapping of R(x) is simple. We summarize the whole procedure of our method in Algorithm 1.

By the strongly convexity of fi

, we show that the eigenvalues of the approximate Hessian

Hr obtained from Algorithm 2 is bounded.

By Assumption 2, there exist two constants 0≤γ≤Γ such that the matrix Hr constructed from Algorithm 2 satisfies γId⪯Hr⪯ΓId, where

By Assumption 2 and Algorithm 1, we have λId⪯∇2fTr(^xr)⪯ΛId and yr=∇2fTr(^xr)sr, which implies

Letting zr=(∇2fTr(^xr))1/2sr and using the definition of τ in Algorithm 2, we have

Using the Woodbury formula and the procedure of Algorithm 2, we can write Hr as

Then the largest eigenvalue of Hr has the upper bound

Then we can bound the value of uTrur as follows

where the last inequality uses the result of (8). We can compute the determinant of Hr as follows.

Combining with the result in (9), we have

We generalize Lemma 3.6 in Xiao & Zhang (2014), by integrating the second-order information.

We can bound the variance of the stochastic gradient vk as following lemma.

Based on the above results, we can obtain the following convergence result of our method.

Let 0<η<γ28ΓLQ, x∗=argminxP(x) and LQ be the definition of Lemma 4. When m is sufficiently large, we have

and xk−xk+1=ηH−1r(vk+ξk)=ηgk. Then consider the difference of x∗ and iteration results with respect to Hr

where the first inequality uses the results (10) and the second inequality is obtained by η≤γ28ΓLQ≤γ/L.

Then we bound −2ηΔTk(xk+1−x∗). We define the result of proximal mapping of the full gradient as

Recall that we obtain xk+1 via

are independent of the random variable

Consider s stages, ~xs=1m∑mk=1xk. Summing over k=1,2…,m on the above inequality and taking the expectation with S0…,Sm−1, we have