A proof of the Shepp-Olkin entropy monotonicity conjecture

Consider tossing a collection of coins, each fair or biased towards heads, and take the distribution of the total number of heads that result. It is natural to conjecture that this distribution should be 'more random' when each coin is fairer. Indeed, Shepp and Olkin conjectured that the Shannon entropy of this distribution is monotonically increasing in this case. We resolve this conjecture, by proving that this intuition is correct. Our proof uses a construction which was previously developed by the authors to prove a related conjecture of Shepp and Olkin concerning concavity of entropy. We discuss whether this result can be generalized to q-Rényi and q-Tsallis entropies, for a range of values of q. 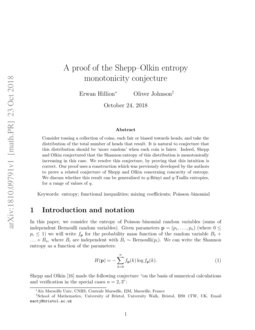 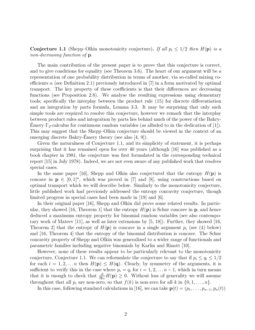 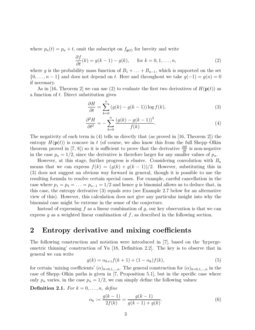 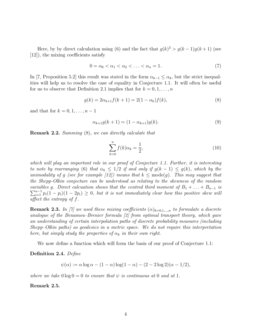 We provide a short proof of a result by Cardell (1997) on a conjecture o...
Alfred Galichon, et al. ∙

A second moment proof of the spread lemma

We prove a conjecture of Ben-Akiva and Lerman (1985) regarding the rando...
Alfred Galichon, et al. ∙

for the probability mass function of the random variable

B1+…+Bn, where Bi are independent with Bi∼ Bernoulli(pi). We can write the Shannon entropy as a function of the parameters:

Shepp and Olkin [16] made the following conjecture “on the basis of numerical calculations and verification in the special cases n=2,3”:

The main contribution of the present paper is to prove that this conjecture is correct, and to give conditions for equality (see Theorem 3.6

). The heart of our argument will be a representation of one probability distribution in terms of another, via so-called mixing coefficients

α (see Definition 2.1) previously introduced in [7] in a form motivated by optimal transport. The key property of these coefficients is that their differences are decreasing functions (see Proposition 2.8). We analyse the resulting expressions using elementary tools; specifically the interplay between the product rule (15) for discrete differentiation and an integration by parts formula, Lemma 3.3. It may be surprising that only such simple tools are required to resolve this conjecture, however we remark that the interplay between product rules and integration by parts lies behind much of the power of the Bakry-Émery Γ2

[1]). This may suggest that the Shepp–Olkin conjecture should be viewed in the context of an emerging discrete Bakry-Émery theory (see also [4, 9]).

Given the naturalness of Conjecture 1.1, and its simplicity of statement, it is perhaps surprising that it has remained open for over 40 years (although [16] was published as a book chapter in 1981, the conjecture was first formulated in the corresponding technical report [15] in July 1978). Indeed, we are not even aware of any published work that resolves special cases.

In the same paper [16], Shepp and Olkin also conjectured that the entropy H(p) is concave in p∈[0,1]n, which was proved in [7] and [8], using constructions based on optimal transport which we will describe below. Similarly to the monotonicity conjecture, little published work had previously addressed the entropy concavity conjecture, though limited progress in special cases had been made in [19] and [6].

that the entropy of the binomial distribution is concave. The Schur concavity property of Shepp and Olkin was generalized to a wider range of functionals and parametric families including negative binomials by Karlin and Rinott

However, none of these results appear to be particularly relevant to the monotonicity conjecture, Conjecture 1.1. We can reformulate the conjecture to say that if pi≤qi≤1/2 for each i=1,2,…n then H(p)≤H(q). Clearly, by symmetry of the arguments, it is sufficient to verify this in the case where pi=qi for i=1,2,…n−1, which in turn means that it is enough to check that ∂∂pnH(p)≥0. Without loss of generality we will assume throughout that all pi are non-zero, so that f(k) is non-zero for all k in {0,1,…,n}.

As in [16, Theorem 2] we can use (2) to evaluate the first two derivatives of H(p(t)) as a function of t. Direct substitution gives

The negativity of each term in (4) tells us directly that (as proved in [16, Theorem 2]) the entropy H(p(t)) is concave in t (of course, we also know this from the full Shepp–Olkin theorem proved in [7, 8]) so it is sufficient to prove that the derivative ∂H∂t is non-negative in the case pn=1/2, since the derivative is therefore larger for any smaller values of pn.

However, at this stage, further progress is elusive. Considering convolution with Bn means that we can express f(k)=(g(k)+g(k−1))/2. However, substituting this in (3) does not suggest an obvious way forward in general, though it is possible to use the resulting formula to resolve certain special cases. For example, careful cancellation in the case where p1=p2=…=pn−1=1/2 and hence g is binomial allows us to deduce that, in this case, the entropy derivative (3) equals zero (see Example 2.7 below for an alternative view of this). However, this calculation does not give any particular insight into why the binomial case might be extreme in the sense of the conjecture.

The following construction and notation were introduced in [7], based on the ‘hypergeometric thinning’ construction of Yu [18, Definition 2.2]. The key is to observe that in general we can write

for certain ‘mixing coefficients’ (α)k=0,1,…,n. The general construction for (α)k=0,1,…,n in the case of Shepp–Olkin paths is given in [7, Proposition 5.1], but in the specific case where only pn varies, in the case pn=1/2, we can simply define the following values:

In [7, Proposition 5.2] this result was stated in the form αk−1≤αk, but the strict inequalities will help us to resolve the case of equality in Conjecture 1.1. It will often be useful for us to observe that Definition 2.1 implies that for k=0,1,…,n

Summing (8), we can directly calculate that

which will play an important role in our proof of Conjecture 1.1. Further, it is interesting to note by rearranging (6) that αk≤1/2 if and only if g(k−1)≤g(k), which by the unimodality of g (see for example [12]) means that k≤mode(g)

. This may suggest that the Shepp-Olkin conjecture can be understood as relating to the skewness of the random variables

. Direct calcuation shows that the centred third moment of

In [7] we used these mixing coefficients (α)k=0,1,…,n to formulate a discrete analogue of the Benamou–Brenier formula [2]

from optimal transport theory, which gave an understanding of certain interpolation paths of discrete probability measures (including Shepp–Olkin paths) as geodesics in a metric space. We do not require this interpretation here, but simply study the properties of

αk in their own right.

We now define a function which will form the basis of our proof of Conjecture 1.1:

We can express the derivative of entropy in terms of these functions and the mixing coefficients, as follows:

We can exchange the order of summation in

because of Fubini’s theorem, since as mentioned above the power series for ψ converges absolutely. Hence if each odd centered moment is negative then the entropy derivative (3) is positive. ∎

Notice that, using Remark 2.5 and Proposition 2.6, we can immediately deduce that the entropy derivative must lie between −2(1−log2) and 2(1−log2).

by relabelling, and hence equals zero.

We shall argue that the binomial example, Example 2.7, represents the extreme case using the following property, which will be key for us:

Note that comparing averages, and taking the values of α0=0 and αn=1 from (7), Proposition 2.8 implies that

or that if all the pi≤1/2 then αk≥k/n for 0≤k≤n, showing that the binomial distribution of Example 2.7 is the extreme case in this sense.

We are now in a position to complete our proof of Conjecture 1.1.

First we introduce some further notation:

We now state three technical lemmas that we will require in the proof; each of these are proved in Appendix B. First, the fact that Bp(k) is decreasing in k:

We next give an integration by parts formula. Note that although we restrict the range of summation for technical reasons, the values Ap(k) and Ap+1(k) are zero outside the respective ranges:

Finally, a result concerning differences of the Q polynomials:

We now state and prove the key Proposition:

(Note that by restricting to this range of summation the Bp(k) is well-defined).

We are now able to prove the following theorem, which confirms Conjecture 1.1:

As described in Proposition 2.6, it is sufficient for us to prove that for every r≥1 we have

and we are done. Note that an examination of (3) allows us to deduce conditions under which equality holds for the cubic case (r=1). In this case we can rewrite (3) using the integration by parts formula (17) as

Here g(k) and αk are positive for k≥1, and Proposition 2.8 tells us that the second bracket is negative, and so the centered third moment equals zero if and only βk+1−βk is constant in k, which means that αk=k/n. However, (10) tells us that this implies that

so that equality can hold if and only if pi≡1/2. ∎

4 Monotonicity of Rényi and Tsallis entropies

As in [8, Section 4] where a similar discussion considered the question of concavity of entropies, we briefly discuss whether Theorem 3.6 may extend to prove that q-Rényi and q-Tsallis entropies are always increasing functions of p for pi≤1/2. We make the following definitions, each of which reduce to the Shannon entropy (1) as q→1.

For fp as defined above, for 0≤q≤∞ define

Note that, unlike the concavity case of [8, Section 4], since they are both monotone functions of ∑nx=0fp(x)q, both HR,q(p) and HT,q(p) will be increasing in p in the same cases. We can provide analogues of (3) and (4) by (for q≠1)

Again, the second term is negative, and therefore HT,q(p) will be increasing for all pn≤1/2 if it is increasing in the case pn=1/2. Clearly for q=0 (24) shows that the entropy is constant (indeed we know that in this case HR,q=log(n+1) and HT,q=n).

Curiously, we can simplify (24) in the case of collision entropy (q=2) by substituting for f as a linear combination of g (which is the argument that did not work for q=1).

which is equal to the term stated in (26) by relabelling. Note that (curiously) this property will hold for any g, including the mass function of any B1+…+Bn−1 (not necessarily with pi<1/2). ∎

It may be natural to conjecture that Tsallis (and hence Rényi) entropy is increasing for all q. However, the following example shows that this property in fact can fail for q>2 (note that Rényi entropy is not concave in the same range – see [8, Lemma 4.3]).

and we note that 2q−2q≥0 for q>2, so the leading coefficient is negative and so the derivative will be negative for ϵ sufficiently small.

However, we conjecture that these entropies are increasing for 0≤q≤2, since we know that the result holds for q=0,1,2:

If all pi≤1/2 then Tsallis entropy HT,q(p) and Rényi entropy HR,q(p) are non-decreasing functions of p for 0≤q≤2.

We use an argument similar to that which gave Proposition 2.6 to give a moment-based condition related to this conjecture.

We first add a telescoping sum in equation (24):

where, using the binomial theorem, the function ψq can be expressed as

Oliver Johnson would like to thank the Isaac Newton Institute for Mathematical Sciences, Cambridge, for support and hospitality during the workshop Beyond I.I.D. in information theory where work on this paper was undertaken. This work was supported by EPSRC grant no EP/K032208/1.

Appendix A Proof of Proposition 2.8

so the property is equivalent to

and by direct substitution we deduce that