This paper proposes a totally constructive approach for the proof of Hilbert's theorem on ternary quartic forms. The main contribution is the ladder technique, with which the Hilbert's theorem is proved vividly. 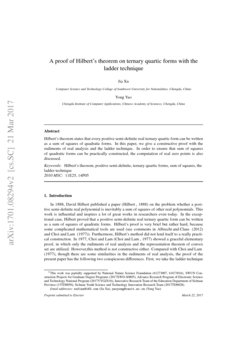 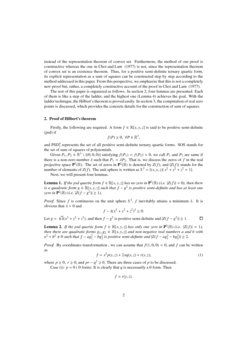 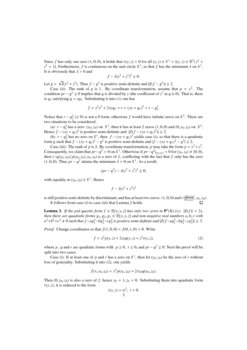 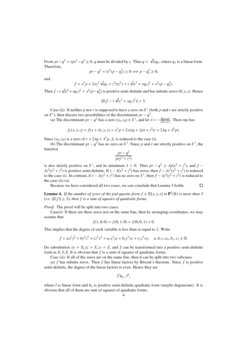 In 1888, David Hilbert published a paper (Hilbert, 1888) on the problem whether a positive semi-definite real polynomial is inevitably a sum of squares of other real polynomials. This work is influential and inspires a lot of great works in researchers even today. In the exceptional case, Hilbert proved that a positive semi-definite real ternary quartic form can be written as a sum of squares of quadratic forms. Hilbert’s proof is very brief but rather hard, because some complicated mathematical tools are used (see comments in Albrecht and Claus (2012) and Choi and Lam (1977)). Furthermore, Hilbert’s method did not lend itself to a really practical construction. In 1977, Choi and Lam (Choi and Lam, 1977) showed a graceful elementary proof, in which only the rudiments of real analysis and the representation theorem of convex set are utilized. However,this method is not constructive either. Compared with Choi and Lam (1977), though there are some similarities in the rudiments of real analysis, the proof of the present paper has the following two conspicuous differences. First, we take the ladder technique instead of the representation theorem of convex set. Furthermore, the method of our proof is constructive whereas the one in Choi and Lam (1977) is not, since the representation theorem of convex set is an existence theorem. Thus, for a positive semi-definite ternary quartic form, its explicit representation as a sum of squares can be constructed step by step according to the method addressed in this paper. From this perspective, we emphasize that this is not a completely new proof but, rather, a completely constructive account of the proof in Choi and Lam (1977).

The rest of this paper is organized as follows. In section 2, four lemmas are presented. Each of them is like a step of the ladder, and the highest one (Lemma 4) achieves the goal. With the ladder technique, the Hilbert’s theorem is proved easily. In section 3, the computation of real zero points is discussed, which provides the concrete details for the construction of sum of squares.

Firstly, the following are required. A form f∈R[x,y,z] is said to be positive semi-definite (psd) if

and PSD43 represents the set of all positive semi-definite ternary quartic forms. SOS stands for the set of sum of squares of polynomials.

Next, we will present four lemmas.

Since f is continuous on the unit sphere S2, f inevitably attains a minimum λ. It is obvious that λ>0 and

By coordinates transformation , we can assume that f(1,0,0)=0, and f can be written as

Case (ii): The rank of p is 1. By coordinate transformation, assume that p=y2. The condition pr−q2≥0 implies that q is divided by y (the coefficient of z3 in q is 0). That is, there is q1 satisfying q=yq1. Substituting it into (1) one has

Notice that r−q21 (≥0) is not a 0 form, otherwise f would have infinite zeros on S2. There are two situations to be considered.

It follows from case (i) to case (iii) that Lemma 2 holds. ∎

Case (ii): If neither p nor r is supposed to have a zero on S1 (both p and r are strictly positive on S1), then discuss two possibilities of the discriminant pr−q2.

(b) The discriminant pr−q2 has no zero on S1. Since p and r are strictly positive on S1, the function

Because we have considered all two cases, we can conclude that Lemma 3 holds. ∎

The proof will be split into two cases.

Case(i): If there are three zeros not on the same line, then by arranging coordinates, we may assume that

This implies that the degree of each variable is less than or equal to 2. Write

Do substitution xy=X,yz=Y,zx=Z, and f can be transformed into a positive semi-definite form in X,Y,Z. It is obvious that f is a sum of squares of quadratic forms.

Case (ii): If all of the zeros are on the same line, then it can be split into two subcases.

(a) f has infinite zeros. Then f has linear factors by B´ezout’s theorem. Since f is positive semi-definite, the degree of the linear factors is even. Hence they are

where l is linear form and h2 is positive semi-definite quadratic form (maybe degenerate). It is obvious that all of them are sum of squares of quadratic forms.

(b) f has finite zeros. we claim that this case will never happen. The reason is as follows.

With the above 4 lemmas, Hilbert’s theorem will be proved with a chart.

A positive semi-definite ternary quartic form over the reals can be written as a sum of squares of quadratic forms.

The following chart will present the process of proof.

rmk1Remark Theorem 1 is the weak edition of Hilbert’s theorem. The strong edition is that the positive semi-definite ternary quartic forms are sum of no more than three squares of quadratic forms. The proof of the strong edition can see Albrecht and Claus (2012), Powers et al. (2004) and Scheiderer (2010).

rmk2[rmk1]Remark The real zeros are assumed to be known in the above proof. To achieve the goal of really practical construction , we still need some method in solving the real zeros of ternary quartic forms. This problem will be conquered in Section 3, and we will really obtain the practically constructive proof of Hilbert’s theorem.

Next we will present an example. ex1Example (Cirtoaje, 2006) Compute the sum of squares of the following ternary quartic form.

Solution: Since f has 4 zeros in the projective space. There are

By computing, we have

Compute the inverse matrix of A,

and substitute it into (4), and then the sum of squares of f is as follows.

In this section, we will discuss the problem of computing zeros. Lemma 4 presents a key of constructing sum of squares, that is, finding out at least three real zeros of a positive semi-definite ternary quartic form. Next we will prove a proposition (Lemma 5) that can solve the problem of computing the real zeros of positive semi-definite ternary forms. The fundamental idea comes from Yang and Xia (2000); Xia and Yang (2016).

It is easy to get that the real zero (x0,y0,z0)∈S2 of positive semi-definite form f need to satisfy the following equations for solving stationary points.

rmk3Remark In Lemma 5 f cannot include square factors, otherwise res(f,f′x,x) would identically equal to 0. Thus the equations {f=0,res(f,f′x,x)=0} in P2(R) is zero dimension, and we can solve the above equations with various efficient methods such as method of resultant (Kapur et al., 1994; Canny and Manocha, 1993), rational single variable present method (Rouillier, 1999), etc.

rmk4[rmk3]Remark The general version of Lemma 5 (successive resultant method (Yang and Xia, 2000; Xia and Yang, 2016)) also ensure the minimum of Lemma 1, Lemma 2 and Lemma 3 can be computed accurately, and then ensure the above proof of Hilbert’s theorem is completely constructive. However, the following example (example 3) shows that the practical computation may be very complex and finally comes to nothing because of high time complexity.

Next we will present two computing examples.

Then compute the resultant res(f,f′x,x),

By using real root isolation algorithm (Xia and Yang, 2016), we know that the equation res(f,f′x,x) =0 has four real zeros in the projective space P2(R):

where α1<α2<α3 are three positive real zeros of t3−5t2+6t−1=0. Substituting the above four points into the polynomial f, and we have four real zeros of f=0 in the real projective space P2(R). There are

Consequently f can be written as a sum of squares according to Lemma 4.

In Scheiderer (2016) this form is proven to have the following characters: g cannot be written as sum of squares of quadratic forms with rational coefficients. That is to say the answer of Sturmfels’s question (Scheiderer, 2016) is negative. It means that it is very difficult to write g as sum of squares for the tools that depend on numerical computation such as SOSTOOLS (Parrilo, 2003).

Next we compute the zeros of g in the real projective space.

Then compute the resultant

By Lemma 1, one yields that there is a positive constant t such that

It is very difficult to compute the real zeros of gt for high time complexity.

In this paper, we give a proof of Hilbert’s theorem by four lemmas and the ladder technique. According to the proof, catching at least three real zeros of a positive semi-definite ternary quartic form is necessary for constructing its sum of squares. Consequently, we present the method of locating the zeros based on the property that zeros of a positive semi-definite form satisfy the equations for stationary points. However the representation of sum of squares using this method may be complex and how to build a clear representation is a new question.