We propose an entanglement-based quantum bit string commitment protocol whose composability is proven in the random oracle model. This protocol has the additional property of preserving the privacy of the committed message. Even though this property is not resilient against man-in-the-middle attacks, this threat can be circumvented by considering that the parties communicate through an authenticated channel. The protocol remains secure (but not private) if we realize the random oracles as physical unclonable functions in the so-called bad PUF model with access before the opening phase. 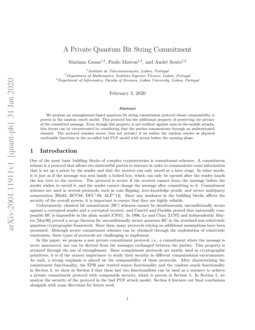 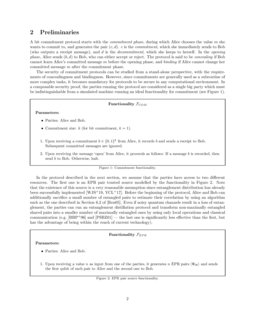 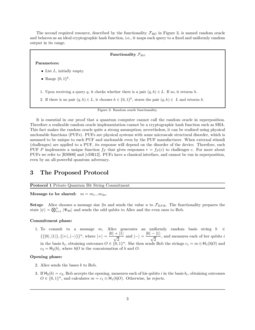 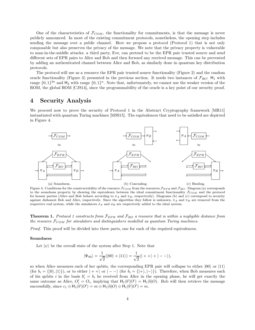 Quantum private comparison (QPC), whose security is based on the laws of...
Zhao-Xu Ji, et al. ∙

Secure list decoding and its application to bit-string commitment

We propose a new concept of secure list decoding, which is related to bi...
Masahito Hayashi, et al. ∙

One of the most basic building blocks of complex cryptosystems is commitment schemes. A commitment scheme is a protocol that allows two mistrustful parties to interact in order to communicate some information that is set up a priori by the sender and that the receiver can only unveil at a later stage. In other words, it is just as if the message was sent inside a locked box, which can only be opened after the sender hands the key over to the receiver. The protocol is secure if the receiver cannot learn the message before the sender wishes to unveil it, and the sender cannot change the message after committing to it. Commitment schemes are used in several protocols, such as coin flipping, zero-knowledge proofs, and secure multiparty computation [BLU83, BCC88, DFL+09, ALP+14]. Since any weakness in the building blocks affects the security of the overall system, it is important to ensure that they are highly reliable.

Unfortunately, classical bit commitment (BC) schemes cannot be simultaneously unconditionally secure against a corrupted sender and a corrupted receiver, and Canetti and Fischlin proved that universally composable BC is impossible in the plain model [CF01]. In 1996, Lo and Chau [LC97] and independently Mayers [MAY96] proved a no-go theorem for unconditionally secure quantum BC in the standard non-relativistic quantum cryptographic framework. Since then, many protocols relying on additional assumptions have been presented. Although secure commitment schemes can be obtained through the exploitation of relativistic constraints, these types of protocols are challenging to implement.

In this paper, we propose a new private commitment protocol, i.e., a commitment where the message is never announced, nor can be derived from the messages exchanged between the parties. This property is attained through the use of entanglement. Since commitment protocols are mostly used as cryptographic primitives, it is of the utmost importance to study their security in different computational environments. As such, a strong emphasis is placed on the composability of these protocols. After characterizing the commitment functionality, the EPR pair trusted source functionality and the random oracle functionality in Section 2, we show in Section 3 that these last two functionalities can be used as a resource to achieve a private commitment protocol with composable security, which is proven in Section 4. In Section 5, we analyse the security of the protocol in the bad PUF attack model. Section 6 features our final conclusions alongside with some directions for future work.

A bit commitment protocol starts with the commitment phase, during which Alice chooses the value m she wants to commit to, and generates the pair (c,d). c is the commitment, which she immediately sends to Bob (who outputs a receipt message), and d is the decommitment, which she keeps to herself. In the opening phase, Alice sends (b,d) to Bob, who can either accept or reject. The protocol is said to be concealing if Bob cannot learn Alice’s committed message m before the opening phase, and binding if Alice cannot change her committed message m after the commitment phase.

The security of commitment protocols can be studied from a stand-alone perspective, with the requirements of concealingness and bindingness. However, since commitments are generally used as a subroutine of more complex tasks, it becomes mandatory for protocols to be secure in any computational environment. In a composable security proof, the parties running the protocol are considered as a single big party which must be indistinguishable from a simulated machine running an ideal functionality for commitment (see Figure 1).

In the protocol described in the next section, we assume that the parties have access to two different resources. The first one is an EPR pair trusted source modelled by the functionality in Figure 2. Note that the existence of this source is a very reasonable assumption since entanglement distribution has already been successfully implemented [WJS+19, YCL+17]

. Before the beginning of the protocol, Alice and Bob can additionally sacrifice a small number of entangled pairs to estimate their correlation by using an algorithm such as the one described in Section 6.2 of

[REN05]. Even if noisy quantum channels result in a loss of entanglement, the parties can run an entanglement distillation protocol and transform non-maximally entangled shared pairs into a smaller number of maximally entangled ones by using only local operations and classical communication (e.g. [BBP+96] and [PSB+01] — the last one is significantly less effective than the first, but has the advantage of being within the reach of current technology).

The second required resource, described by the functionality FRO in Figure 3, is named random oracle and behaves as an ideal cryptographic hash function, i.e., it maps each query to a fixed and uniformly random output in its range.

It is essential in our proof that a quantum computer cannot call the random oracle in superposition. Therefore a realizable random oracle implementation cannot be a cryptographic hash function such as SHA. This fact makes the random oracle quite a strong assumption; nevertheless, it can be realized using physical unclonable functions (PUFs). PUFs are physical systems with some microscale structural disorder, which is assumed to be unique to each PUF and unclonable even by the PUF manufacturer. When external stimuli (challenges) are applied to a PUF, its response will depend on the disorder of the device. Therefore, each PUF P implements a unique function fP that gives responses r=fP(c) to challenges c. For more about PUFs we refer to [RSS09] and [vR12]. PUFs have a classical interface, and cannot be run in superposition, even by an all-powerful quantum adversary.

One of the characteristics of FCOM, the functionality for commitments, is that the message is never publicly announced. In most of the existing commitment protocols, nonetheless, the opening step includes sending the message over a public channel. Here we propose a protocol (Protocol 3) that is not only composable but also preserves the privacy of the message. We note that the privacy property is vulnerable to man-in-the-middle attacks: a third party, Eve, can pretend to be the EPR pair trusted source and send different sets of EPR pairs to Alice and Bob and then forward any received message. This can be prevented by adding an authenticated channel between Alice and Bob, as similarly done in quantum key distribution protocols.

The protocol will use as a resource the EPR pair trusted source functionality (Figure 2) and the random oracle functionality (Figure 3) presented in the previous section. It needs two instances of FRO: H1 with range {0,1}2n and H2 with range {0,1}n. Note that, unfortunately, we cannot use the weaker version of the ROM, the global ROM [CJS14], since the programmability of the oracle is a key point of our security proof.

[MSS15]. The equivalences that need to be satisfied are depicted in Figure 4.

Protocol 3 constructs from FEPR and FRO a resource that is within a negligible distance from the resource FCOM for simulators and distinguishers modelled as quantum Turing machines.

This proof will be divided into three parts, one for each of the required equivalences.

Let |ψ⟩ be the overall state of the system after Step 1. Note that

Given any behaviour of a dishonest receiver, we have to construct a simulator σB that simulates H1, H2, and FEPR and provides the receiver with a commitment that can later be opened to the message in FCOM. Consider the following program for σB:

, and hence there is no algorithm for the dishonest receiver allowing him to guess the committed message with probability greater than

Given any behaviour of a dishonest sender, we have to construct a simulator σA that simulates H1, H2, and FEPR and retrieves the message m from the sender’s commitment values and sends it to FCOM. It must also be able to detect when the sender is cheating and, whenever that happens, not send the opening message to FCOM. Consider the following program for σA:

The real world receiver outputs error whenever the string b′ sent by the sender is such that H2(b′)≠H2(b). From the soundness property, we know that when b′=b the receiver correctly retrieves the message. We are interested in the situation where b′≠b (in which case the commitment will not be opened in the ideal world) and H2(b′)=H2(b). Since FRO is collision-resistant, this can only happen with negligible probability. ∎

The addition of an authenticated communication channel makes this protocol a private and composable commitment protocol, which is yet to be achieved by classical cryptography based on the same assumptions.

In order to study the security of PUF applications in a realistic scenario, two attack models are described in [Rv13]: the PUF re-use model and the bad PUF model. In the PUF re-use model, we assume some PUFs are used more than once throughout the protocol and the adversary has access to the PUFs more than once. In the bad PUF model, the fact that PUFs are real physical objects is exploited, and we consider both the simulatable bad PUFs, which possess a simulation algorithm that can be used by the manufacturer to compute responses to challenges and the challenge-logging bad PUFs, which allow the manufacturer to access a memory module in the device and read all the challenges applied to it (this malicious feature could also be added by an adversary after the construction of the PUF). The notion of strong PUFs is also described. Strong PUF is a type of PUF with a public interface (i.e., anyone holding it can apply challenges and read the responses), a large number of possible challenges and behaviour so complex that it cannot be modelled to predict responses to challenges. In our brief analysis, we consider that in the proposed protocol (Protocol 3) the ROM is replaced by strong PUFs.

Note that Protocol 3 is secure in the bad PUF model if we also consider that Alice sends the message m to Bob in the opening phase, thus giving up the privacy property. The security holds independently of whether the malicious party has access to the PUFs before the opening phase or not. This follows from the fact that considering the PUFs are manufactured by Alice and she can find collisions in H1 and H2, she will still not know what message to open to in order to match the one calculated by Bob since the outcomes of his measurements of qubits in incorrect bases will be uniformly random.

With this work, we achieved a commitment protocol that is not only composable but also private, since the message is never publicly announced. Man-in-the-middle attacks can be prevented by adding an authenticated channel. We suggest the use of physical unclonable functions to model random oracles, and note that the protocol remains secure (although not private) if we consider the bad PUF attack model with access before the opening phase, which has been proven impossible for classical bit commitment without other assumptions.

Additionally, it is also of interest to further study how to obtain composability in commitment schemes while using the minimum possible assumptions (for more on this topic see [LYM+19]), and which of these assumptions are needed to achieve privacy.