In this work we present a randomized gossip algorithm for solving the average consensus problem while at the same time protecting the information about the initial private values stored at the nodes. We give iteration complexity bounds for the method and perform extensive numerical experiments. 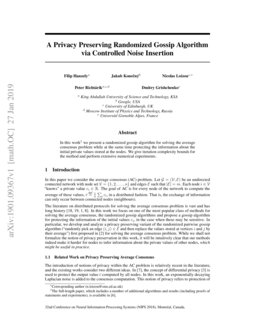 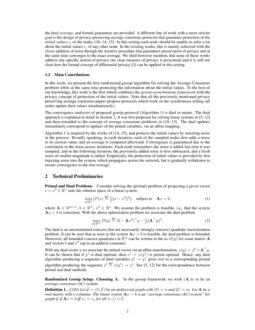 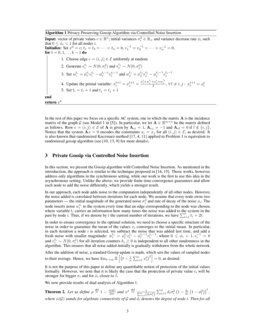 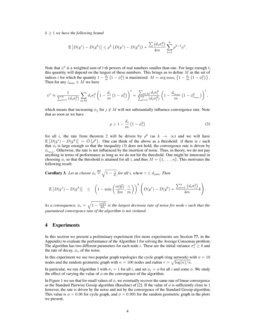 A Randomized Algorithm for CCA

In this paper we show how the stochastic heavy ball method (SHB) -- a po...
Nicolas Loizou, et al. ∙

In this work we present a new framework for the analysis and design of r...
Nicolas Loizou, et al. ∙

In this paper we consider the problem of privacy preservation in the sta...
Amir-Salar Esteki, et al. ∙

In this paper we consider the average consensus (AC) problem. Let G=(V,E) be an undirected connected network with node set V={1,2,…,n} and edges E such that |E|=m. Each node i∈V “knows” a private value ci∈R. The goal of AC is for every node of the network to compute the average of these values, ¯cdef=1n∑ici, in a distributed fashion. That is, the exchange of information can only occur between connected nodes (neighbours).

The literature on distributed protocols for solving the average consensus problem is vast and has long history tsitsiklis1984problems ; tsitsiklis1986distributed ; bertsekas1989parallel ; kempe2003gossip . In this work we focus on one of the most popular class of methods for solving the average consensus, the randomized gossip algorithms and propose a gossip algorithm for protecting the information of the initial values ci, in the case when these may be sensitive. In particular, we develop and analyze a privacy preserving variant of the randomized pairwise gossip algorithm (“randomly pick an edge (i,j)∈E and then replace the values stored at vertices i and j by their average”) first proposed in boyd2006randomized for solving the average consensus problem. While we shall not formalize the notion of privacy preservation in this work, it will be intuitively clear that our methods indeed make it harder for nodes to infer information about the private values of other nodes, which might be useful in practice.

The introduction of notions of privacy within the AC problem is relatively recent in the literature, and the existing works consider two different ideas. In huang2012differentially , the concept of differential privacy dwork2014algorithmic is used to protect the output value ¯c computed by all nodes. In this work, an exponentially decaying Laplacian noise is added to the consensus computation. This notion of privacy refers to protection of the final average, and formal guarantees are provided. A different line of work with a more stricter goal is the design of privacy-preserving average consensus protocols that guarantee protection of the initial values ci of the nodes nozari2017differentially ; manitara2013privacy ; mo2017privacy . In this setting each node should be unable to infer a lot about the initial values ci of any other node. In the existing works, this is mainly achieved with the clever addition of noise through the iterative procedure that guarantees preservation of privacy and at the same time converges to the exact average. We shall however mention, that none of these works address any specific notion of privacy (no clear measure of privacy is presented) and it is still not clear how the formal concept of differential privacy dwork2014algorithmic can be applied in this setting.

In this work, we present the first randomized gossip algorithm for solving the Average Consensus problem while at the same time protecting the information about the initial values. To the best of our knowledge, this work is the first which combines the gossip-asynchronous framework with the privacy concept of protection of the initial values. Note that all the previously mentioned privacy preserving average consensus papers propose protocols which work on the synchronous setting (all nodes update their values simultaneously).

The convergence analsysis of proposed gossip protocol (Algorithm 1) is dual in nature. The dual approach is explained in detail in Section 2. It was first proposed for solving linear systems in SDA ; loizou2017momentum and then extended to the concept of average consensus problems in LoizouRichtarik ; loizou2018accelerated . The dual updates immediately correspond to updates of the primal variables, via an affine mapping.

Algorithm 1 is inspired by the works of manitara2013privacy ; mo2017privacy , and protects the initial values by inserting noise in the process. Broadly speaking, in each iteration, each of the sampled nodes first adds a noise to its current value, and an average is computed afterward. Convergence is guaranteed due to the correlation in the noise across iterations. Each node remembers the noise it added last time it was sampled, and in the following iteration, the previously added noise is first subtracted, and a fresh noise of smaller magnitude is added. Empirically, the protection of initial values is provided by first injecting noise into the system, which propagates across the network, but is gradually withdrawn to ensure convergence to the true average.

Consider solving the (primal) problem of projecting a given vector

c=x0∈Rn onto the solution space of a linear system:

where A∈Rm×n, b∈Rm, x0∈Rn. We assume the problem is feasible, i.e., that the system Ax=b is consistent. With the above optimization problem we associate the dual problem

The dual is an unconstrained concave (but not necessarily strongly concave) quadratic maximization problem. It can be seen that as soon as the system Ax=b is feasible, the dual problem is bounded. Moreover, all bounded concave quadratics in Rm can be written in the as D(y) for some matrix A and vectors b and x0 (up to an additive constant).

With any dual vector y we associate the primal vector via an affine transformation, x(y)=x0+A⊤y. It can be shown that if y∗ is dual optimal, then x∗=x(y∗) is primal optimal. Hence, any dual algorithm producing a sequence of dual variables yt→y∗ gives rise to a corresponding primal algorithm producing the sequence xtdef=x(yt)→x∗. See SDA ; loizou2017momentum for the correspondence between primal and dual methods.

In the gossip framework we wish (A,b) to be an average consensus (AC) system.

(LoizouRichtarik ) Let G=(V,E) be an undirected graph with |V|=n and |E|=m. Let A be a real matrix with n columns. The linear system Ax=b is an “average consensus (AC) system” for graph G if Ax=b iff xi=xj for all (i,j)∈E.

In the rest of this paper we focus on a specific AC system; one in which the matrix A is the incidence matrix of the graph G (see Model 1 in SDA ). In particular, we let A∈Rm×n be the matrix defined as follows. Row e=(i,j)∈E of A is given by Aei=1, Aej=−1 and Ael=0 if l∉{i,j}. Notice that the system Ax=0 encodes the constraints xi=xj for all (i,j)∈E, as desired. It is also known that randomized Kaczmarz method RK ; gower2015randomized ; loizou2017linearly applied to Problem 1 is equivalent to randomized gossip algorithm (see LoizouRichtarik ; loizou2018accelerated ; loizou2018provably for more details).

In this section, we present the Gossip algorithm with Controlled Noise Insertion. As mentioned in the introduction, the approach is similar to the technique proposed in manitara2013privacy ; mo2017privacy . Those works, however, address only algorithms in the synchronous setting, while our work is the first to use this idea in the asynchronous setting. Unlike the above, we provide finite time convergence guarantees and allow each node to add the noise differently, which yields a stronger result.

In our approach, each node adds noise to the computation independently of all other nodes. However, the noise added is correlated between iterations for each node. We assume that every node owns two parameters — the initial magnitude of the generated noise σ2i and rate of decay of the noise ϕi. The node inserts noise wtii to the system every time that an edge corresponding to the node was chosen, where variable ti carries an information how many times the noise was added to the system in the past by node i. Thus, if we denote by t the current number of iterations, we have ∑ni=1ti=2t.

In order to ensure convergence to the optimal solution, we need to choose a specific structure of the noise in order to guarantee the mean of the values xi converges to the initial mean. In particular, in each iteration a node i is selected, we subtract the noise that was added last time, and add a fresh noise with smaller magnitude: wtii=ϕtiivtii−ϕti−1ivti−1i, where 0≤ϕi<1,v−1i=0 and vtii∼N(0,σ2i) for all iteration counters ki≥0 is independent to all other randomness in the algorithm. This ensures that all noise added initially is gradually withdrawn from the whole network.

After the addition of noise, a standard Gossip update is made, which sets the values of sampled nodes to their average. Hence, we have limt→∞E[(¯¯c−1n∑ni=1xti)2]=0, as desired.

It is not the purpose of this paper to define any quantifiable notion of protection of the initial values formally. However, we note that it is likely the case that the protection of private value ci will be stronger for bigger σi and for ϕi closer to 1.

We now provide results of dual analysis of Algorithm 1.

Let us define ρdef=1−α(G)2m and ψtdef=1∑ni=1(diσ2i)∑ni=1diσ2i(1−dim(1−ϕ2i))t, where α(G) stands for algebraic connectivity of G and di denotes the degree of node i. Then for all k≥1 we have the following bound

Note that ψt is a weighted sum of t-th powers of real numbers smaller than one. For large enough t, this quantity will depend on the largest of these numbers. This brings us to define M as the set of indices i for which the quantity 1−dim(1−ϕ2i) is maximized: M=argmaxi{1−dim(1−ϕ2i)}. Then for any imax∈M we have

which means that increasing ϕj for j∉M will not substantially influence convergence rate. Note that as soon as we have

for all i, the rate from theorem 2 will be driven by ρk (as k→∞) and we will have E[D(y∗)−D(yk)]=~O(ρk). One can think of the above as a threshold: if there is i such that ϕi is large enough so that the inequality (3) does not hold, the convergence rate is driven by ϕimax. Otherwise, the rate is not influenced by the insertion of noise. Thus, in theory, we do not pay anything in terms of performance as long as we do not hit the threshold. One might be interested in choosing ϕi so that the threshold is attained for all i, and thus M={1,…,n}. This motivates the following result:

Let us choose ϕidef=√1−γdi for all i, where γ≤dmin. Then

As a consequence, ϕi=√1−α(G)2di is the largest decrease rate of noise for node i such that the guaranteed convergence rate of the algorithm is not violated.

In this section we present a preliminary experiment (for more experiments see Section LABEL:moreExp, in the Appendix) to evaluate the performance of the Algorithm 1 for solving the Average Consensus problem. The algorithm has two different parameters for each node i. These are the initial variance σ2i≥0 and the rate of decay, ϕi, of the noise.

In this experiment we use two popular graph topologies the cycle graph (ring network) with n=10 nodes and the random geometric graph with n=100 nodes and radius r=√log(n)/n.

In particular, we run Algorithm 1 with σi=1 for all i, and set ϕi=ϕ for all i and some ϕ. We study the effect of varying the value of ϕ on the convergence of the algorithm.

In Figure 1 we see that for small values of ϕ, we eventually recover the same rate of linear convergence as the Standard Pairwise Gossip algorithm (Baseline) of boyd2006randomized . If the value of ϕ is sufficiently close to 1 however, the rate is driven by the noise and not by the convergence of the Standard Gossip algorithm. This value is ϕ=0.98 for cycle graph, and ϕ=0.995 for the random geometric graph in the plots we present.