A Priori Estimates of the Population Risk for Residual Networks

Optimal a priori estimates are derived for the population risk of a regularized residual network model. The key lies in the designing of a new path norm, called the weighted path norm, which serves as the regularization term in the regularized model. The weighted path norm treats the skip connections and the nonlinearities differently so that paths with more nonlinearities have larger weights. The error estimates are a priori in nature in the sense that the estimates depend only on the target function and not on the parameters obtained in the training process. The estimates are optimal in the sense that the bound scales as O(1/L) with the network depth and the estimation error is comparable to the Monte Carlo error rates. In particular, optimal error bounds are obtained, for the first time, in terms of the depth of the network model. Comparisons are made with existing norm-based generalization error bounds. 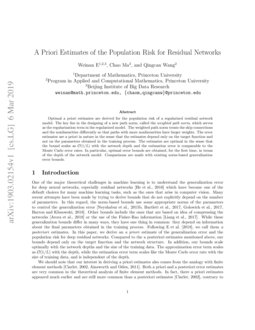 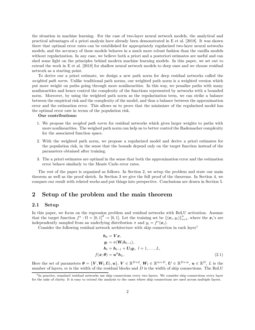 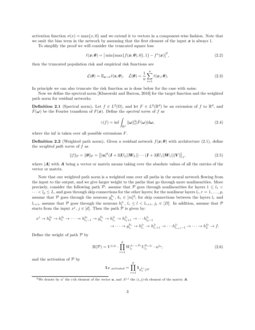 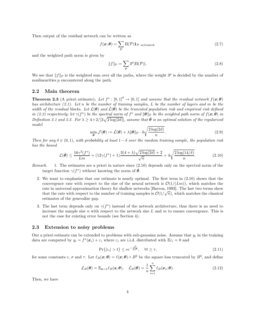 New estimates for the generalization error are established for the two-l...
Weinan E, et al. ∙

The behavior of the gradient descent (GD) algorithm is analyzed for a de...
Weinan E, et al. ∙

One of the major theoretical challenges in machine learning is to understand the generalization error for deep neural networks, especially residual networks

which have become one of the default choices for many machine learning tasks, such as the ones that arise in computer vision. Many recent attempts have been made by trying to derive bounds that do not explicitly depend on the number of parameters. In this regard, the norm-based bounds use some appropriate norms of the parameters to control the generalization error

(Neyshabur et al., 2015b; Bartlett et al., 2017; Golowich et al., 2017; Barron and Klusowski, 2018). Other bounds include the ones that are based on idea of compressing the networks (Arora et al., 2018) or the use of the Fisher-Rao information (Liang et al., 2017). While these generalization bounds differ in many ways, they have one thing in common: they depend on information about the final parameters obtained in the training process. Following E et al. (2018), we call them a posteriori estimates. In this paper, we derive an a priori estimate of the generalization error and the population risk for deep residual networks. Compared to the a posteriori estimates mentioned above, our bounds depend only on the target function and the network structure. In addition, our bounds scale optimally with the network depths and the size of the training data. The approximation error term scales as O(1/L) with the depth, while the estimation error term scales like the Monte Carlo error rate with the size of training data, and is independent of the depth.

We should note that our interest in deriving a priori estimates also comes from the analogy with finite element methods (Ciarlet, 2002; Ainsworth and Oden, 2011). Both a priori and a posteriori error estimates are very common in the theoretical analysis of finite element methods. In fact, there a priori estimates appeared much earlier and are still more common than a posteriori estimates (Ciarlet, 2002), contrary to the situation in machine learning. For the case of two-layer neural network models, the analytical and practical advantages of a priori analysis have already been demonstrated in E et al. (2018). It was shown there that optimal error rates can be established for appropriately regularized two-layer neural networks models, and the accuracy of these models behaves in a much more robust fashion than the vanilla models without regularization. In any case, we believe both a priori and a posteriori estimates are useful and can shed some light on the principles behind modern machine learning models. In this paper, we set out to extend the work in E et al. (2018) for shallow neural network models to deep ones and we choose residual network as a starting point.

To derive our a priori estimate, we design a new path norm for deep residual networks called the weighted path norm. Unlike traditional path norms, our weighted path norm is a weighted version which put more weight on paths going through more nonlinearities. In this way, we penalize paths with many nonlinearities and hence control the complexity of the functions represented by networks with a bounded norm. Moreover, by using the weighted path norm as the regularization term, we can strike a balance between the empirical risk and the complexity of the model, and thus a balance between the approximation error and the estimation error. This allows us to prove that the minimizer of the regularized model has the optimal error rate in terms of the population risk.

The rest of the paper is organized as follows. In Section 2, we setup the problem and state our main theorem as well as the proof sketch. In Section 3 we give the full proof of the theorems. In Section 4, we compare our result with related works and put things into perspective. Conclusions are drawn in Section 5.

2 Setup of the problem and the main theorem

In this paper, we focus on the regression problem and residual networks with ReLU activation. Assume that the target function

is the width of skip connections. The ReLU activation function

and we extend it to vectors in a component-wise fashion. Note that we omit the bias term in the network by assuming that the first element of the input

To simplify the proof we will consider the truncated square loss

then the truncated population risk and empirical risk functions are

In principle we can also truncate the risk function as is done below for the case with noise.

Now we define the spectral norm (Klusowski and Barron, 2016) for the target function and the weighted path norm for residual networks.

be the Fourier transform of

F(x). Define the spectral norm of f as

where the inf is taken over all possible extensions F.

Given a residual network f(x;θ) with architecture (2.1), define the weighted path norm of f as

Note that our weighted path norm is a weighted sum over all paths in the neural network flowing from the input to the output, and we give larger weight to the paths that go through more nonlinearities. More precisely, consider the following path P: assume that P goes through nonlinearities for layers 1≤l1<⋯<lp≤L, and goes through skip connections for the other layers; for the nonlinear layers lr,r=1,…,p, assume that P

goes through the neurons

Define the weight of path P by

and the activation of P by

Then output of the residual network can be written as

and the weighted path norm is given by

We see that ∥f∥P is the weighted sum over all the paths, where the weight 3p is decided by the number of nonlinearities p encountered along the path.

Let f⋆:[0,1]d→[0,1] and assume that the residual network f(x;θ) has architecture (2.1). Let n be the number of training samples, L be the number of layers and m be the width of the residual blocks. Let L(θ) and ^L(θ) be the truncated population risk and empirical risk defined in (2.3) respectively; let γ(f⋆) be the spectral norm of f⋆ and ∥θ∥P be the weighted path norm of f(x;θ) in Definition 2.1 and 2.2. For λ≥4+2/[3√2log(2d)], assume that ^θ is an optimal solution of the regularized model

, with probability at least

1−δ over the random training sample, the population risk has the bound

Our a priori estimate can be extended to problems with sub-gaussian noise. Assume that yi in the training data are computed by yi=f⋆(xi)+εi where εi are i.i.d. distributed with Eεi=0 and

for some constants c, σ and τ. Let ℓB(x;θ)=ℓ(x;θ)∧B2 be the square loss truncated by B2, and define

Then for any δ∈(0,1), with probability at least 1−δ over the random training sample, the population risk satisfies

We see that the a priori estimates for noisy problems only differ from that for noiseless problems by a logarithmic term. In particular, the estimates of the generalization error are still near optimal.

We prove the main theorem in 3 steps. We list the main intermediate results in this section, and leave the full proof to Section 3.

First, we show that there exists a set of parameters ~θ such that L(~θ)→0 and ∥~θ∥P is controlled as L,m→∞.

For any distribution π with compact support Ω∈Rd, and any target function f⋆∈L2(Ω) with γ(f)<∞, there exists a residual network f(x;~θ) with depth L and width m, such that

Recall the definition of Rademacher complexity:

Given a function class H and sample set S={xi}ni=1, the (empirical) Rademacher complexity of H with respect to S is defined as

’s are independent random variables with

It is well-known that the generalization gap is controlled by the Rademacher complexity (Shalev-Shwartz and Ben-David, 2014).

The following theorem is a crucial step in our analysis. It shows that the Rademacher complexity of residual networks can be controlled by the weighted path norm.

From Theorems 2.7 and 2.8, we have the following a posteriori estimates.

Let ∥θ∥P be the weighted path norm of residual network f(x;θ). Let n be the number of training samples. Let L(θ) and ^L(θ) be the truncated population risk and empirical risk defined in (2.3). Then for any δ∈(0,1), with probability at least 1−δ over the random training samples, we have

By comparing the definition of objective function J (2.9) with the a posteriori estimate (2.19), we conclude that for any θ,

where |L(θ)−^L(θ)| is bound with high probability in (2.19). Recall that ^θ is the optimal solution of the objective function (2.9), and ~θ corresponds to the approximation in Theorem 2.5, we get

For problems with noise, we only need the following lemma:

The details of the proof are given in the following Section 3.

For any distribution π with compact support Ω∈Rd, and any target function f⋆∈L2(Ω) with γ(f⋆)<∞, there exists a one-hidden-layer network with width m, such that

For residual networks, we prove the approximation result by splitting the shallow network into several parts and stack them vertically.

Recall the assumption that the first element of input x is always 1, thus we can omit the bias terms cj in Theorem 3.1. Hence there exists a shallow network with width Lm that satisfies

To bound the Rademacher complexity of residual networks, we first define the hidden neurons in the residual blocks and their corresponding path norm.

Given a residual network defined by (2.1), let

Let gil be the i-th element of gl, define the weighted path norm

The following Lemma 3.3 establishes the relationship between ∥f∥P and ∥gil∥P. Lemma 3.4 gives properties of the corresponding function class. We omit the proof here.

where U:,jl is the j-th column of Ul.

With Lemma 3.3–3.6, we can bound the Rademacher complexity of residual networks in Theorem 2.8.

We first estimate the Rademacher complexity of GQl. We do this by induction:

Similarly, based on the control for the Rademacher complexity of GQ1,…,GQL, we get

From Theorem 2.7, with probability at least 1−δ,

holds for all Q∈N∗. In particular, for given θ, the inequality holds for Q=⌈∥θ∥⌉<∥θ∥P+1, thus

Now we are ready to prove the main Theorem 2.3.

Let ^θ be the optimal solution of the regularized model (2.9), and ~θ be the approximation in Theorem 2.5. Consider

Finally, we deal with the noise and prove Theorem 2.4. For problems with noise, we decompose L(^θ)−L(~θ) as

Based on the results we had for the noiseless problems, in (3.16) we only have to estimate the first and the last term. This can be done by Lemma 2.10.

4.1 Comparison with norm-based a posteriori estimates

Several research groups have proposed different norms to bound the generalization error of deep neural networks, including the group norm and path norm given in Neyshabur et al. (2015b), the spectral norm in Bartlett et al. (2017), and the variational norm in Barron and Klusowski (2018). In these works, the bounds for the generalization gap L(<span class="mjx-char MJXc-TeX-math-I" style="padding-top: