A Preliminary Study on Optimal Placement of Cameras

This paper primarily focuses on figuring out the best array of cameras, or visual sensors, so that such a placement enables the maximum utilization of these visual sensors. Maximizing the utilization of these cameras can convert to another problem that is simpler for the formulation, that is, maximizing the total coverage with these cameras. To solve the problem, the coverage problem is first defined subject to the capabilities and limits of cameras. Then, poses of cameras are analyzed for the best arrangement. 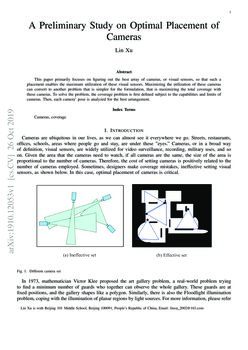 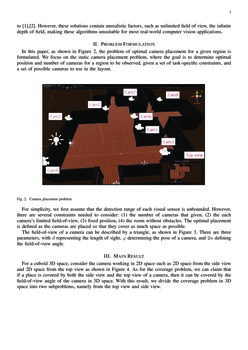 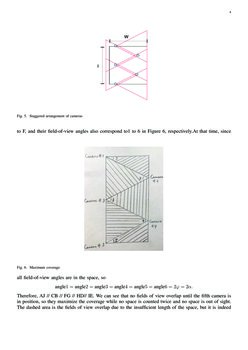 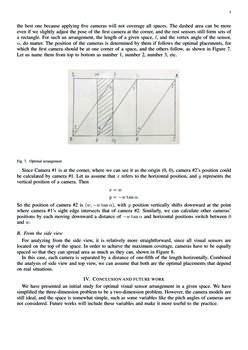 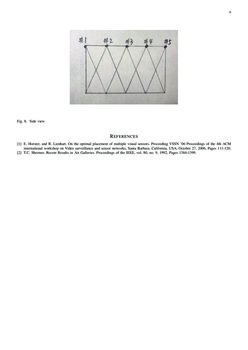 This paper proposes a method to compute camera 6Dof poses to achieve a u...
Akshay Malhotra, et al. ∙

We can only allow human-robot-cooperation in a common work cell if the h...
Maria L. Hänel, et al. ∙

Towards Security-Optimized Placement of ADS-B Sensors

In this paper, it is proposed to solve the problem of triangulation for ...
Ciaran Eising, et al. ∙

Speechreading or lipreading is the technique of understanding and gettin...
Yaman Kumar, et al. ∙

Cameras are ubiquitous in our lives, as we can almost see it everywhere we go. Streets, restaurants, offices, schools, areas where people go and stay, are under these ”eyes.” Cameras, or in a broad way of definition, visual sensors, are widely utilized for video surveillance, recording, military uses, and so on. Given the area that the cameras need to watch, if all cameras are the same, the size of the area is proportional to the number of cameras. Therefore, the cost of setting cameras is positively related to the number of cameras employed. Sometimes, designers make coverage mistakes, ineffective setting visual sensors, as shown below. In this case, optimal placement of cameras is critical.

In 1973, mathematician Victor Klee proposed the art gallery problem, a real-world problem trying to find a minimum number of guards who together can observe the whole gallery. These guards are at fixed positions, and the gallery shapes like a polygon. Similarly, there is also the Floodlight illumination problem, coping with the illumination of planar regions by light sources. For more information, please refer to [1],[2]. However, these solutions contain unrealistic factors, such as unlimited field of view, the infinite depth of field, making these algorithms unsuitable for most real-world computer vision applications.

In this paper, as shown in Figure 2, the problem of optimal camera placement for a given region is formulated. We focus on the static camera placement problem, where the goal is to determine optimal position and number of cameras for a region to be observed, given a set of task-specific constraints, and a set of possible cameras to use in the layout.

For simplicity, we first assume that the detection range of each visual sensor is unbounded. However, there are several constraints needed to consider: (1) the number of cameras that given, (2) the each camera’s limited field-of-view, (3) fixed position, (4) the room without obstacles. The optimal placement is defined as the cameras are placed so that they cover as much space as possible.

Iii-a From the top view

From the top view, the best arrangement should be that all spaces are covered ideally, and the overlapped areas should be minimal. Due to such an analysis, the cameras should be placed in a staggered way such that these visual sensors would not monitor a space multiple times, shown in Figure 5.

Proposition 1. As shown in Figure 6, given that cameras with the same field-of-view angle 2 and unbounded the depth of view, the staggered arrangement is optimal for a rectangular space.

Proof. In order to get the maximum coverage, the pose of a camera should be changed such that all field-of-view angle is included in the given space, as shown in Figure 6. Six cameras are labelled by A to F, and their field-of-view angles also correspond to1 to 6 in Figure 6, respectively.

At that time, since all field-of-view angles are in the space, so

Therefore, AJ // CB // FG // HD// IE. We can see that no fields of view overlap until the fifth camera is in position, so they maximize the coverage while no space is counted twice and no space is out of sight. The dashed area is the fields of view overlap due to the insufficient length of the space, but it is indeed the best one because applying five cameras will not coverage all spaces. The dashed area can be more even if we slightly adjust the pose of the first camera at the corner, and the rest sensors still form sets of a rectangle. For such an arrangement, the length of a given space, l, and the vertex angle of the sensor, α, do matter. The position of the cameras is determined by them if follows the optimal placements, for which the first camera should be at one corner of a space, and the others follow, as shown in Figure 7. Let us name them from top to bottom as number 1, number 2, number 3, etc.

Since Camera #1 is at the corner, where we can see it as the origin (0, 0), camera #2’s position could be calculated by camera #1. Let us assume that x refers to the horizontal position, and y represents the vertical position of a camera. Then

So the position of camera #2 is (w,−wtanα), with y position vertically shifts downward at the point where camera #1’s sight edge intersects that of camera #2. Similarly, we can calculate other cameras’ positions by each moving downward a distance of −wtanα and horizontal positions switch between 0 and w.

Iii-B From the side view

For analyzing from the side view, it is relatively more straightforward, since all visual sensors are located on the top of the space. In order to achieve the maximum coverage, cameras have to be equally spaced so that they can spread area as much as they can, shown in Figure 8.

In this case, each camera is separated by a distance of one-fifth of the length horizontally. Combined the analysis of side view and top view, we can assume that both are the optimal placements that depend on real situations.

We have presented an initial study for optimal visual sensor arrangement in a given space. We have simplified the three-dimension problem to be a two-dimension problem. However, the camera models are still ideal, and the space is somewhat simple, such as some variables like the pitch angles of cameras are not considered. Future works will include these variables and make it more useful to the practice.