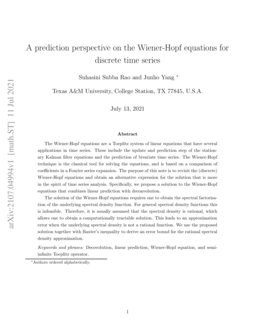 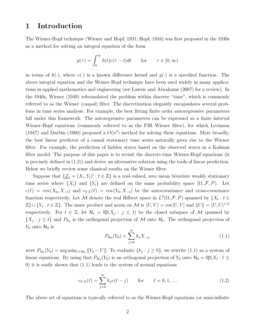 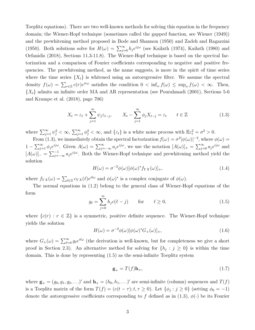 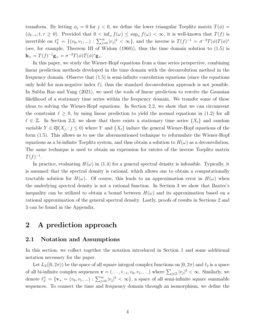 A note on Herglotz's theorem for time series on function spaces

The Wiener-Hopf technique (Wiener and Hopf, 1931; Hopf, 1934) was first proposed in the 1930s as a method for solving an integral equation of the form

in terms of h(⋅), where c(⋅) is a known difference kernel and g(⋅) is a specified function. The above integral equation and the Weiner-Hopf technique have been used widely in many applications in applied mathematics and engineering (see Lawrie and Abrahams (2007) for a review). In the 1940s, Wiener (1949) reformulated the problem within discrete “time”, which is commonly referred to as the Wiener (causal) filter. The discretization elegantly encapsulates several problems in time series analysis. For example, the best fitting finite order autoregressive parameters fall under this framework. The autoregressive parameters can be expressed as a finite interval Wiener-Hopf equations (commonly referred to as the FIR Wiener filter), for which Levinson (1947) and Durbin (1960) proposed a O(n2) method for solving these equations. More broadly, the best linear predictor of a causal stationary time series naturally gives rise to the Wiener filter. For example, the prediction of hidden states based on the observed states in a Kalman filter model. The purpose of this paper is to revisit the discrete-time Wiener-Hopf equations (it is precisely defined in (1.2)) and derive an alternative solution using the tools of linear prediction. Below we briefly review some classical results on the Wiener filter.

are defined on the same probability space

(Ω,F,P). Let c(ℓ)=cov(X0,X−ℓ) and cYX(ℓ)=cov(Y0,X−ℓ) be the autocovariance and cross-covariance function respectively. Let M denote the real Hilbert space in L2(Ω,F,P) spanned by {Xt:t∈Z}∪{Yt:t∈Z}. The inner product and norm on M is ⟨U,V⟩=cov[U,V] and ∥U∥=⟨U,U⟩1/2 respectively. For t∈Z, let Ht=¯¯¯¯¯sp(Xj:j≤t) be the closed subspace of M spanned by {Xj:j≤t} and PHt is the orthogonal projection of M onto Ht. The orthogonal projection of Y0 onto H0 is

The above set of equations is typically referred to as the Wiener-Hopf equations (or semi-infinite Toeplitz equations). There are two well-known methods for solving this equation in the frequency domain; the Wiener-Hopf technique (sometimes called the gapped function, see

Wiener (1949)) and the prewhitening method proposed in Bode and Shannon (1950) and Zadeh and Ragazzini (1950). Both solutions solve for H(ω)=∑∞j=0hjeijω (see Kailath (1974), Kailath (1980) and Orfanidis (2018), Sections 11.3-11.8). The Wiener-Hopf technique is based on the spectral factorization and a comparison of Fourier coefficients corresponding to negative and positive frequencies. The prewhitening method, as the name suggests, is more in the spirit of time series where the time series {Xt} is whitened using an autoregressive filter. We assume the spectral density f(ω)=∑r∈Zc(r)eirω satisfies the condition 0<infωf(ω)≤supωf(ω)<∞. Then, {Xt} admits an infinite order MA and AR representation (see Pourahmadi (2001), Sections 5-6 and Krampe et al. (2018), page 706)

is a white noise process with

The normal equations in (1.2) belong to the general class of Wiener-Hopf equations of the form

where {c(r):r∈Z} is a symmetric, positive definite sequence. The Wiener-Hopf technique yields the solution

where G+(ω)=∑∞ℓ=0gℓeiℓω (the derivation is well-known, but for completeness we give a short proof in Section 2.3). An alternative method for solving for {hj:j≥0} is within the time domain. This is done by representing (1.5) as the semi-infinite Toeplitz system

be its Fourier transform. By letting

In this paper, we study the Wiener-Hopf equations from a time series perspective, combining linear prediction methods developed in the time domain with the deconvolution method in the frequency domain. Observe that (1.5) is semi-infinite convolution equations (since the equations only hold for non-negative index ℓ), thus the standard deconvolution approach is not possible. In Subba Rao and Yang (2021), we used the tools of linear prediction to rewrite the Gaussian likelihood of a stationary time series within the frequency domain. We transfer some of these ideas to solving the Wiener-Hopf equations. In Section 2.2, we show that we can circumvent the constraint ℓ≥0, by using linear prediction to yield the normal equations in (1.2) for all ℓ∈Z. In Section 2.3, we show that there exists a stationary time series {Xt}

Y∈¯¯¯¯¯¯sp(Xj:j≤0) where Y and {Xt} induce the general Wiener-Hopf equations of the form (1.5). This allows us to use the aforementioned technique to reformulate the Wiener-Hopf equations as a bi-infinite Toeplitz system, and thus obtain a solution to H(ω) as a deconvolution. The same technique is used to obtain an expression for entries of the inverse Toeplitz matrix T(f)−1.

In this section, we collect together the notation introduced in Section 1 and some additional notation necessary for the paper.

Let {c(r):r∈Z} be a symmetric positive definite sequence and f(ω)=∑r∈Zc(r)eirω be its Fourier transform. Then,

Under Assumption 2.1(i), we have the unique factorization

We now give an alternative formulation for the solution of (1.2) and (1.5), which utilizes properties of linear prediction to solve it using a standard deconvolution method. To integrate our derivation within the Wiener causal filter framework, we start with the classical Wiener filter. For {Xt:t∈Z} and Y∈M, let

We observe that by construction, (2.2) gives rise to the normal equations

Since (2.3) only holds for positive ℓ, this prevents one using deconvolution to solve for H(ω). Instead, we define a “proxy” set of variables for {X−ℓ:ℓ<0} such that (2.3) is valid for ℓ<0. By using the property of orthogonal projections, we have

This forms the key to the following theorem.

Isolating the positive frequencies in (2.11) gives the solution

this proves the result stated in (1.6). Similarly, by isolating the negative frequencies, we obtain G−(ω) in terms of f and G+(ω)

The Wiener-Hopf technique yields an explicit solution for H(ω) and G−(ω). However, from a time series perspective, it is difficult to interpret these formulas. We now obtain an alternative expression for these solutions based on a linear prediction of random variables.

We note that the positive indices in the sequence g± are {gℓ:ℓ≥0}, but for the negative indices, where ℓ<0, it is gℓ=[C01C−111g+]ℓ which is identical to gℓ defined in (2.9). The Fourier transform on both sides in (2.13) gives the deconvolution f(ω)H(ω)=F(g±)(ω), which is identical to (2.10). We now reformulate the above equation through the lens of prediction. To do this we define a stationary process {Xt} and a random variable Y on the same probability space which yields (2.8) as their normal equations.

We first note that since {c(r):r∈Z} is a symmetric, positive definite sequence, there exists a stationary time series {Xt} with {c(r):r∈Z} is its autocovariance function (see Brockwell and Davis (2006), Theorem 1.5.1). Using this we define the random variable

Suppose that {c(r):r∈Z} is a symmetric, positive definite sequence and its Fourier transform f(ω)=∑r∈Zc(r)eirω satisfies Assumption 2.1(i). We define the (semi) infinite system of equations

Therefore, the above are equivalent if

We now prove the above is true by direct verification.

Suppose the same set of assumptions and notations in Theorem 2.2 hold. Then

As mentioned in Section 1, it is well-known that T(f)−1=σ−2T(ϕ)T(ϕ)∗. We show below that an alternative expression for the entries of T(f)−1=(dk,j;k,j≥0) can be deduced using the deconvolution method described in Theorem 2.2.

The case that the (autocovariance) sequence {C(r):r∈Z} is made up of d×d-dimensions, has not been considered in this paper. However, if Σ(ω)=∑r∈ZC(r)eirω

is a positive definite matrix with Vector MA

(∞) and Vector AR(∞) representations, then it is may be possible to extend the above results to the multivariate setting. A sufficient condition for this to hold is that there exists a 1≤c<∞ such that for all ω

We now use the expression in (2.15) to obtain an approximation of H(ω) in terms of a best fitting AR(p) coefficients. In particular, using that ψ(ω)∗=[ϕ(ω)∗]−1, we replace the infinite order AR coefficients in

The purpose of this appendix is to give the technical details behind the results stated in the main section.

The second term on the right hand side of (A.1) looks quite wieldy. However, we show below that it can be expressed in terms of the AR(∞) coefficients associated with f. It is well-known that the ℓ-step ahead forecast PH0(Xℓ) (ℓ>0) has the representation PH0(Xℓ)=∑∞j=0ϕj(ℓ)X−j, where for ℓ>0, the ℓ-step prediction coefficients are