A posteriori error estimates for the Allen-Cahn problem

This work is concerned with the proof of a posteriori error estimates for fully-discrete Galerkin approximations of the Allen-Cahn equation in two and three spatial dimensions. The numerical method comprises of the backward Euler method combined with conforming finite elements in space. For this method, we prove conditional type a posteriori error estimates in the L^_4(0,T;L^_4(Ω))-norm that depend polynomially upon the inverse of the interface length ϵ. The derivation relies crucially on the availability of a spectral estimate for the linearized Allen-Cahn operator about the approximating solution in conjunction with a continuation argument and a variant of the elliptic reconstruction. The new analysis also appears to improve variants of known a posteriori error bounds in L_2(H^1), L_∞^(L_2^)-norms in certain regimes. 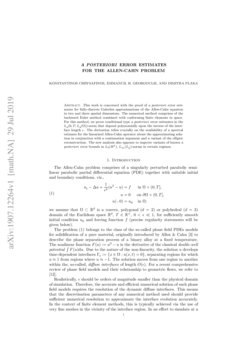 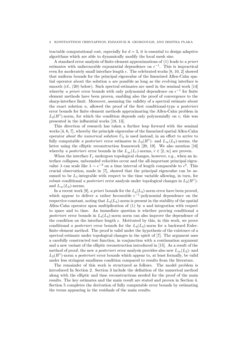 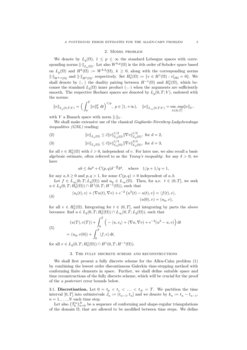 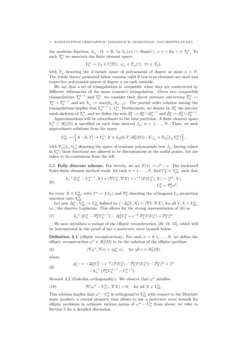 This work is concerned with the development of an adaptive numerical met...
Stephen Metcalfe, et al. ∙

In this work we analyze the inverse problem of recovering the space-depe...
Bangti Jin, et al. ∙

A posteriori error estimates for wave maps into spheres

New estimates for the generalization error are established for the two-l...
Weinan E, et al. ∙

we assume that Ω⊂Rd is a convex, polygonal (d=2) or polyhedral (d=3) domain of the Euclidean space Rd, T∈R+, 0<ϵ≪1, for sufficiently smooth initial condition u0 and forcing function f (precise regularity statements will be given below).

The problem (1) belongs to the class of the so-called phase field PDEs models for solidification of a pure material, originally introduced by Allen & Cahn [3] to describe the phase separation process of a binary alloy at a fixed temperature. The nonlinear function F(u):=u3−u is the derivative of the classical double-well potential ∫F(u)du. Due to the nature of the non-linearity, the solution u develops time-dependent interfaces Γt:={x∈Ω:u(x,t)=0}, separating regions for which u≈1 from regions where u≈−1. The solution moves from one region to another within the, so-called, diffuse interfaces of length O(ϵ). For a recent comprehensive review of phase field models and their relationship to geometric flows, we refer to [12].

Realistically, ϵ should be orders of magnitude smaller than the physical domain of simulation. Therefore, the accurate and efficient numerical solution of such phase field models requires the resolution of the dynamic diffuse interfaces. This means that the discretisation parameters of any numerical method used should provide sufficient numerical resolution to approximate the interface evolution accurately. In the context of finite element methods, this is typically achieved via the use of very fine meshes in the vicinity of the interface region. In an effort to simulate at a tractable computational cost, especially for d=3, it is essential to design adaptive algorithms which are able to dynamically modify the local mesh size.

A standard error analysis of finite element approximations of (

1) leads to a priori estimates with unfavourable exponential dependence on ϵ−1. This is impractical even for moderately small interface length ϵ. The celebrated works [8, 10, 2]

u are possible as long as the evolving interface is smooth (cf., (20) below). Such spectral estimates are used in the seminal work [14] whereby a priori error bounds with only polynomial dependence on ϵ−1 for finite element methods have been proven, enabling also the proof of convergence to the sharp-interface limit. Moreover, assuming the validity of a spectral estimate about the exact solution u, allowed the proof of the first conditional-type a posteriori error bounds for finite element methods approximating the Allen-Cahn problem in L2(H1)-norm, for which the condition depends only polynomially on ϵ; this was presented in the influential works [18, 13].

This direction of research has taken a further leap forward with the seminal works [4, 6, 7], whereby the principle eigenvalue of the linearized spatial Allen-Cahn operator about the numerical solution Uh is used instead, in an effort to arrive to fully computable a posteriori error estimates in L2(H1)- and L∞(L2)-norms, the latter using the elliptic reconstruction framework [20, 19]. We also mention [16] whereby a posteriori error bounds in the L∞(Lr)-norms, r∈[2,∞] are proven.

When the interface Γt undergoes topological changes, however, e.g., when an interface collapses, unbounded velocities occur and the all-important principal eigenvalue λ can scale like λ∼ϵ−2 on a time interval of length comparable to ϵ2. This crucial observation, made in [7], showed that the principal eigenvalue can be assumed to be L1-integrable with respect to the time variable allowing, in turn, for robust conditional a posteriori error analysis under topological changes in L2(H1)- and L∞(L2)-norms.

In a recent work [9], a priori bounds for the L4(L4)-norm error have been proved, which appear to deliver a rather favourable ϵ−1-polynomial dependence on the respective constant, noting that L4(L4)-norm is present in the stability of the spatial Allen-Cahn operator upon multiplication of (1) by u and integration with respect to space and to time. An immediate question is whether proving conditional a posteriori error bounds in L4(L4)-norm norm can also improve the dependence of the condition on the interface length ϵ. Motivated by this, in this work, we prove conditional a posteriori error bounds for the L4(L4)-norm for a backward Euler-finite element method. The proof is valid under the hypothesis of the existence of a spectral estimate under topological changes in the spirit of [7]. The argument uses a carefully constructed test function, in conjunction with a continuation argument and a new variant of the elliptic reconstruction introduced in [15]. As a result of the method of proof, the new a posteriori error analysis provides also new L∞(L2)- and L2(H1)-norm a posteriori error bounds which appear to, at least formally, be valid under less stringent smallness condition compared to results from the literature.

The remainder of this work is structured as follows. The model problem is introduced In Section 2. Section 3 include the definition of the numerical method along with the elliptic and time reconstructions needed for the proof of the main results. The key estimates and the main result are stated and proven in Section 4. Section 5 completes the derivation of fully computable error bounds by estimating the terms appearing in the residuals of the main results.

We denote by Lp(Ω), 1≤p≤∞ the standard Lebesgue spaces with corresponding norms ∥⋅∥Lp(Ω). Let also Wk,p(Ω) is the kth order of Sobolev space based on Lp(Ω) and Hk(Ω):=Wk,2(Ω), k≥0, along with the corresponding norms ∥⋅∥Wk,p(Ω) and ∥⋅∥Hk(Ω), respectively. Set H10(Ω):={v∈H1(Ω):v|∂Ω=0}. We shall denote by ⟨⋅,⋅⟩ the duality pairing between H−1(Ω) and H10(Ω), which becomes the standard L2(Ω) inner product (⋅,⋅) when the arguments are sufficiently smooth. The respective Bochner spaces are denoted by Lp(0,T;V), endowed with the norms:

with V a Banach space with norm ∥⋅∥V.

We shall make extensive use of the classical Gagliardo-Nirenberg-Ladyzhenskaya inequalities (GNL) reading:

for all v∈H10(Ω) with ~c>0, independent of v. For later use, we also recall a basic algebraic estimate, often referred to as the Young’s inequality: for any δ>0, we have

3. The fully discrete scheme and reconstructions

We shall first present a fully discrete scheme for the Allen-Cahn problem (1) by combining the lowest order discontinuous Galerkin time-stepping method with conforming finite elements in space. Further, we shall define suitable space and time reconstructions of the fully discrete scheme, which will be crucial for the proof of the a posteriori error bounds below.

Let also {Tnh}Nn=0 be a sequence of conforming and shape-regular triangulations of the domain Ω, that are allowed to be modified between time steps. We define the meshsize function, hn:Ω→R, by hn(x):=diam(τ), x∈τ for τ∈Tnh. To each Tnh we associate the finite element space:

with Pκ denoting the d-variate space of polynomials of degree at most κ∈N. The whole theory presented below remains valid if box-type elements are used and respective polynomial spaces of degree κ on each variable.

We say that a set of triangulations is compatible when they are constructed by different refinements of the same (coarser) triangulation. Given two compatible triangulations Tn−1h and Tnh, we consider their finest common coarsening ^Tnh:=Tnh∧Tn−1h and set ^hn:=max(hn,hn−1). The partial order relation among the triangulations implies that Vn−1h⊂Vnh. Furthermore, we denote by Snh the interior mesh skeleton of Tnh, and we define the sets ^Snh:=Snh∩Sn−1h and ˇSnh:=Snh∪Sn−1h.

Approximations will be subordinate to the time partition. A finite element space Vnh⊂H10(Ω) is specified on each time interval Jn, n=1,…,N. Then, we seek approximate solutions from the space

with P0[Jn;Vh] denoting the space of constant polynomials over Jn, having values in Vnh; these functions are allowed to be discontinuous at the nodal points, but are taken to be continuous from the left.

Let now Δnh:Vnhk→Vnhk defined by (−ΔnhV,X)=(∇V,∇X), for all V,X∈Vnhk, i.e., the discrete Laplacian. This allows for the strong representation of (6) as

We now introduce a variant of the elliptic reconstruction [20, 19, 15], which will be instrumental in the proof of the a posteriori error bounds below.

For each n=0,1,…,N, we define the elliptic reconstruction ωn∈H10(Ω) to be the solution of the elliptic problem

We observe that ωn satisfies

This relation implies that ωn−Unh is orthogonal to Vnhk with respect to the Dirichlet inner product, a crucial property that allows to use a posteriori error bounds for elliptic problems to estimate various norms of ωn−Unh from above; we refer to Section 5 for a detailed discussion.

where ℓn the piecewise linear Lagrange basis function with ℓn(tk)=δkn.

The above definition implies that the time derivative of Uh,

is the discrete backward difference at tn.

We shall now use the reconstructions defined above, together with non-standard energy and continuation arguments and a spectral estimate for the linearized steady-state problem about the approximate solution Uh, to arrive at a posteriori error bounds in the L4(L4)-, L2(H1)- and L∞(L2)-norms.

We begin by splitting the total error as follows:

In view of Remark 3.2, θ can be estimated by a posteriori error bounds for elliptic problems in various norms.

Also, ρ satisfies an equation of the form (4) with a fully computable right-hand side that consists of θ and the problem data. To see this, (4) along with Definitions 3.1 and 3.3 and elementary manipulations lead to the following result.

Therefore, norms of ρ can be estimated through PDE stability arguments; this will be performed below. Before doing so, however, we further estimate the term involving the elliptic reconstructions on the right-hand side from (14).

and correspondingly for gn−1h. Combining the above, the result already follows. ∎

We begin by introducing some notation. We define

Moreover, for brevity, we also set

We shall further estimate each Ij. We begin by splitting I1 into

The Cauchy-Schwarz and Young inequalities also yield I21≤12L2+12∥ρ∥2L2(Ω). Likewise, we split I3 as follows:

From Lemma 4.2 and working as before, we have

Next, we split I2 as follows:

and, using Hölder, Poincaré-Friedrichs and Young inequalities, we deduce