In this paper we develop an a posteriori error analysis for the stationary Stokes-Darcy coupled problem approximated by conforming finite element method on isotropic meshes in R^d, d∈{2,3}. The approach utilizes a new robust stabilized fully mixed discretization developed by Jiaping Yu et al. (Advances in Difference Equations, SpringerOpen Journal, 2018). The a posteriori error estimate is based on a suitable evaluation on the residual of the finite element solution plus the stabilization terms. It is proven that the a posteriori error estimate provided in this paper is both reliable and efficient. 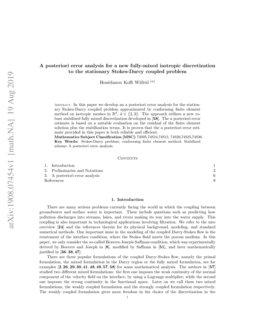 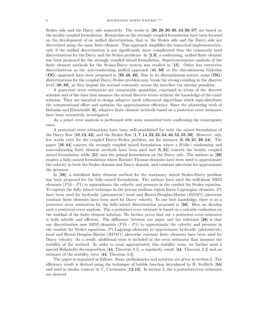 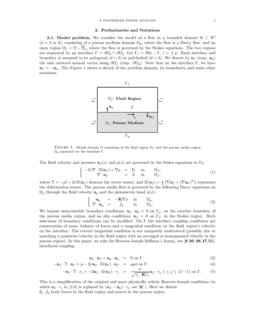 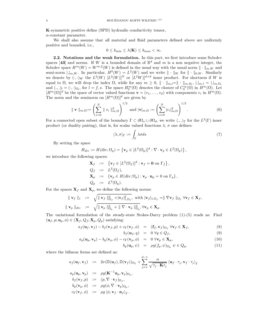 In this paper we develop a new a posteriori error analysis for the Monge...
Jamal Adetola, et al. ∙

In this work we develop an a posteriori error analysis of a conforming m...
Koffi Wilfrid Houédanou, et al. ∙

For the Stokes equation over 2D and 3D domains, explicit a posteriori an...
Xuefeng Liu, et al. ∙

We derive a residual based a-posteriori error estimate for the outer nor...
Silvia Bertoluzza, et al. ∙

There are many serious problems currently facing the world in which the coupling between groundwater and surface water is important. These include questions such as predicting how pollution discharges into streams, lakes, and rivers making its way into the water supply. This coupling is also important in technological applications involving filtration. We refer to the nice overview [24] and the references therein for its physical background, modeling, and standard numerical methods. One important issue in the modeling of the coupled Darcy-Stokes flow is the treatement of the interface condition, where the Stokes fluid meets the porous medium. In this paper, we only consider the so-called Beavers-Joseph-Saffman condition, which was experimentally derived by Beavers and Joseph in [8], modified by Saffman in [51], and later mathematically justified in [36, 37, 38, 47].

A posteriori error estimators are computable quantities, expressed in terms of the discrete solution and of the data that measure the actual discrete errors without the knowledge of the exact solution. They are essential to design adaptive mesh refinement algorithms which equi-distribute the computational effort and optimize the approximation efficiency. Since the pioneering work of Babuska and Rheinboldt [6], adaptive finite element methods based on a posteriori error estimates have been extensively investigated.

An a priori error analysis is performed with some numerical tests confirming the convergence rates.

The paper is organized as follows. Some preliminaries and notation are given in section 2. The efficiency result is derived using the technique of bubble function introduced by R. Verfürth [54] and used in similar context by C. Carstensen [12, 13]. In section 3, the a posteriori error estimates are derived.

We consider the model of a flow in a bounded domain Ω⊂Rd (d=2 or 3), consisting of a porous medium domain Ωp, where the flow is a Darcy flow, and an open region Ωf=Ω∖¯¯¯¯Ωp, where the flow is governed by the Stokes equations. The two regions are separated by an interface Γ=∂Ωp∩∂Ωf. Let Γl=∂Ωl∖Γ, l=f,p. Each interface and boundary is assumed to be polygonal (d=2) or polyhedral (d=3). We denote by nf (resp. np

) the unit outward normal vector along

∂Ωf (resp. ∂Ωp). Note that on the interface Γ, we have nf=−ns. The Figure 1 shows a sketch of the problem domain, its boundaries and some other notations.

The fluid velocity and pressure uf(x) and p(x) are governed by the Stikes equations in Ωf:

denotes the stress tensor, and

D(uf)=12(∇uf+(∇uh)T) represents the deformation tensor. The porous media flow is governed by the following Darcy equations on Ωp through the fluid velocity up and the piezometric head ϕ(x):

We impose impermeable boundary conditions, up⋅np=0 on Γp, on the exterior boundary of the porous media region, and no slip conditions, uf=0 on Γf, in the Stokes region. Both selections of boundary conditions can be modified. On Γ the interface coupling conditions are conservation of mass, balance of forces and a tangential condition on the fluid region’s velocity on the interface. The correct tangential condition is not competely understood (possibly due to matching a pointwise velocity in the fluid region with an averaged or homogenized velocity in the porous region). In this paper, we take the Beavers-Joseph-Saffman (-Jones), see [36, 37, 38, 47, 51, 8], interfacial coupling:

This is a simplification of the original and more physically relistic Beavers-Joseph conditions (in which uf⋅τj in (2.8) is replaced by (uf−up)⋅τj; see [8] ). Here we denote ff, fp-body forces in the fluid region and source in the porous region, K-symmetric positive define (SPD) hydraulic conductivity tensor, α-constant parameter.

We shall also assume that all material and fluid parameters defined above are uniformly positive and bounded, i.e.,

2.2. Notations and the weak formulation

For a connected open subset of the boundary Γ⊂∂Ωs∪∂Ωd, we write ⟨.,.⟩Γ for the L2(Γ) inner product (or duality pairing), that is, for scalar valued functions λ, σ one defines:

By setting the space

we introduce the following spaces:

For the spaces Xf and Xp, we define the following norms:

The variational formulation of the steady-state Stokes-Darcy problem (1)-(5) reads as: Find (uf,p;up,ϕ)∈(Xf,Qf;Xp,Qp) satisfying:

where the bilinear forms are defined as:

the weak formulation (8)-(11) can be equivalentl rewritten as follows: Find U∈H satisfying

It is easy to verify that this variational fromulation is well-posedness.

To end this section, we recall the following Poincaré, Korn’s and the trace inequalities, which will be used in the later analysis; There exist constant Cp, CK, Cv, only depending on ωf such that for all vf∈Xf,

Besides, there exists a constant ~Cv that only depends on Ωp such that for all ψ∈Qp,

The domain of the uniformly regular triangulation ¯¯¯¯Ωf∪¯¯¯¯Ωp is such that ¯¯¯¯Ω={∪K:K∈Th} and h=maxK∈ThhK. There exist positive constants c1 and c2 satisfying c1h≤hK≤c2ρK. To approximate the diameter hK of the trangle (or tetrahedral) K, ρK is the diameter of the greatest ball included in K. Based on the subdivisions Tfh and Tph, we can define finite element spaces Xfh⊂Xh, Qfh⊂Qf, Xph⊂Xp, Qph⊂Qp. We consider the well-known MINI elements (P1b−P1) to approximate the velocity and the pressure in the conduit for Stokes equations [4]. To capture the fully-mixed technique in the porous medium region linear Lagrangian elements, P1 are used for hydraulic (piezometric) head and Brezzi-Douglas-Marini (BDM1) piecewise constant finite elements are used for Darcy velocity [11]. In the fluid region, we select for the Stokes problem the finite element spaces (Xfh,Qfh) that satisfy the velocity-pressure inf-sup condition: There exists a constant βf>0, independent of h, such that,

In the porous region, we use the finite element spaces (Xph,Qph) that also satisfy a standard inf-sup condition: There exist a constant βp>0 such that for all ϕh∈Qph,

This is the natural discretization of the weak formulation (14) except that the stabilized term JΓ(Uh,Vh) is added. This bilinear form JΓ(.,.) is defined by

We are now able to define the norm on Hh:

There exists a unique solution Uh∈Hh to problem (18) and if the solution U∈H of the continuous problem (14) is smooth enough, then we have:

Below, in order to avoid excessive use of constants, the abbreviation x≲y stand for x⩽cy, with c a positive constant independent of x, y and Th.

thus, we have the relation:

where here and below, the errors in the velocity and in the pressure of Stokes equations, and erors in the hydraulic and Darcy velocity equations are respectively defined by:

Our a posteriori analysis requires some analytical results that are recalled. We define the space

The first one concerns a sort of Helmholtz decomposition of elements of H. Recall first that if d=3,

The second result that we need is a regularity result for the solution U=(uf,p,up,ϕ)∈H of (14) is the following theorem:

Let us finish this section by an estimation of the stability error (see [44, Theorem 3.3]):

For any Uh=(ufh,ph,uph,ϕh)∈Hh we have

In order to solve the Stokes-Darcy coupled problem by efficient adaptive finite element methods, reliable and efficient a posteriori error analysis is important to provide appropriated indicators. In this section, we first define the local and global indicators and then the lower and upper error bounds are derived in Section 3.3.

The general philosophy of residual error estimators is to estimate an appropriate norm of the correct residual by terms that can be evaluated easier, and that involve the data at hand. Thus we define the error equations: Let U=(uf,p,up,ϕ)∈H be the exact solution and Uh=(ufh,ph,uph,ϕh)∈Hh be the finite element solution. Then for any Vh=(vfh,qh,vph,ψh)∈Hh and V=(vf,p,vp,ψ)∈H, we have:

The global residual error estimator is given by:

Furthermore denote the local and global approximation terms by

The residual character of each term on the right-hand sides of (1) and (2) is quite clear since if (ufh,ph,uph,ϕh)∈Hh would be the exact solution of (14), then they would vanish.