The paper presents a polynomial time approximation schema for the edge-weighted version of maximum k-vertex cover problem in bipartite graphs. 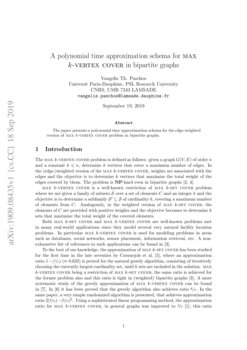 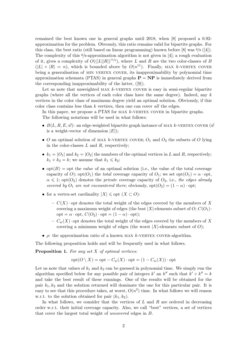 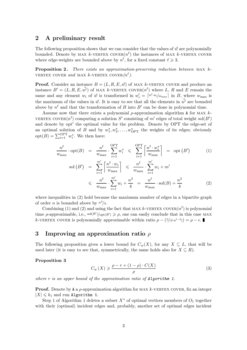 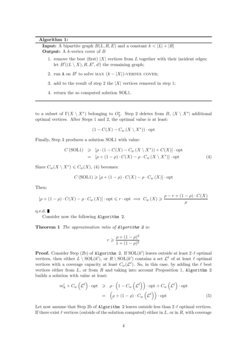 The max k-vertex cover problem is defined as follows: given a graph G(V,E) of order n and a constant k⩽n, determine k vertices that cover a maximum number of edges. In the (edge-)weighted version of the max k-vertex cover, weights are associated with the edges and the objective is to determine k vertices that maximize the total weight of the edges covered by them. The problem is NP-hard even in bipartite graphs [2, 4].

max k-vertex cover is a well-known restriction of max k-set cover problem where we are given a family of subsets S over a set of elements C and an integer k and the objective is to determine a subfamily S′⊆S of cardinality k, covering a maximum number of elements from C. Analogously, in the weighted version of max k-set cover, the elements of C are provided with positive weights and the objective becomes to determine k sets that maximize the total weight of the covered elements.

Both max k-set cover and max k-vertex cover are well-known problems met in many real-world applications since they model several very natural facility location problems. In particular max k-vertex cover is used for modeling problems in areas such as databases, social networks, sensor placement, information retrieval, etc. A non-exhaustive list of references to such applications can be found in [3].

To the best of our knowledge, the approximation of max k-set cover has been studied for the first time in the late seventies by Cornuejols et al. [5], where an approximation ratio 1−(\nicefrac1e) (≈0.632) is proved for the natural greedy algorithm, consisting of iteratively choosing the currently largest-cardinality set, until k sets are included in the solution. max k-vertex cover being a restriction of max k-set cover, the same ratio is achieved for the former problem also and this ratio is tight in (weighted) bipartite graphs [3]. A more systematic study of the greedy approximation of max k-vertex cover can be found in [7]. In [6] it has been proved that the greedy algorithm also achieves ratio \nicefrackn. In the same paper, a very simple randomized algorithm is presented, that achieves approximation ratio 2(\nicefrackn)−(\nicefrackn)2

. Using a sophisticated linear programming method, the approximation ratio for

max k-vertex cover, in general graphs was improved to \nicefrac34 [1]; this ratio remained the best known one in general graphs until 2018, when [8] proposed a 0.92-approximation for the problem. Obvously, this ratio remains valid for bipartite graphs. For this class, the best ratio (still based on linear programming) known before [8] was \nicefrac89 ([4]). The complexity of this \nicefrac89-approximation algorithm is not given in [4]; a rough evaluation of it, gives a complexity of O((|L||R|)\nicefrac112), where L and R are the two color-classes of B (|L|+|R|=n), which is bounded above by O(n11). Finally, max k-vertex cover being a generalisation of min vertex cover, its inapproximability by polynomial time approximation schemata (PTAS) in general graphs P=NP is immediately derived from the corresponding inapproximability of the latter, ([9]).

Let us note that unweighted max k-vertex cover is easy in semi-regular bipartite graphs (where all the vertices of each color class have the same degree). Indeed, any k vertices in the color class of maximum degree yield an optimal solution. Obviously, if this color class contains less than k vertices, then one can cover all the edges.

In this paper, we propose a PTAS for max k-vertex cover in bipartite graphs.

The following notations will be used in what follows:

The following proposition holds and will be frequently used in what follows.

. For any set X of optimal vertices:

Let us note that values of k1 and k2 can be guessed in polynomial time. We simply run the algorithm specified below for any possible pair of integers k′ an k′′ such that k′+k′′=k and take the best result of these runnings. One of the results will be obtained for the pair k1,k2 and the solution returned will dominate the one for this particular pair. It is easy to see that this procedure takes, at worst, O(n2) time. In what follows we will reason w.r.t. to the solution obtained for pair (k1,k2).

In what follows, we consider that the vertices of L and R are ordered in decreasing order w.r.t. their initial coverage capacity. Also, we call “best” vertices, a set of vertices that cover the largest total weight of uncovered edges in B.

The following proposition shows that we can consider that the values of →w are polynomially bounded. Denote by max k-vertex cover(nℓ) the instances of max k-vertex cover where edge-weights are bounded above by nℓ, for a fixed constant ℓ⩾3.

Proof. Consider an instance B=(L,R,E,→w) of max k-vertex cover and produce an instance B′=(L,R,E,→w′) of max k-vertex cover(nℓ) where L, R and E remain the same and any element wi of →w is transformed in w′i=⌈\nicefracnℓ⋅wiwmax⌉ in B, where wmax is the maximum of the values in →w. It is easy to see that all the elements in →w′ are bounded above by nℓ and that the transformation of B into B′ can be done in polynomial time.

Assume now that there exists a polynomial ρ-approximation algorithm A for max k-vertex cover(nℓ) computing a solution S′ consisting of m′ edges of total weight sol(B′) and denote by opt′ the optimal value for the problem. Denote by OPT the edge-set of an optimal solution of B and by w∗1,w∗2,…,w∗OPT the weights of its edges; obviously opt(B)=∑OPTi=1w∗i. We then have:

where inequalities in (2) hold because the maximum number of edges in a bipartite graph of order n is bounded above by \nicefracn24.

The following proposition gives a lower bound for Cw(X), for any X⊆L, that will be used later (it is easy to see that, symmetrically, the same holds also for X⊆R).

where r is an upper bound of the approximation ratio of Algorithm 1.

Proof. Denote by A a ρ-approximation algorithm for max k-vertex cover, fix an integer |X|⩽k1 and run Algorithm 1.

together with their (optimal) incident edges and, probably, another set of optimal edges incident to a subset of

Γ(X∖X∗) belonging to O∗2. Step 2 deletes from B, |X∖X∗| additional optimal vertices. After Steps 1 and 2, the optimal value is at least:

The approximation ratio of Algorithm 2 is:

Proof. Consider Step (2b) of Algorithm 2. If SOL(k′) leaves outside at least 2⋅ℓ optimal vertices, then either L∖SOL(k′), or R∖SOL(k′) contains a set Lℓ of at least ℓ optimal vertices with a coverage capacity at least Cw(Lℓ). So, in this case, by adding the ℓ best vertices either from L, or from R and taking into account Proposition 1, Algorithm 2 builds a solution with value at least:

So, the case remaining to be handled, is the one where:

which, after some easy algebra becomes:

Consider now the very simple algorithm consisting of taking the k first best vertices of R (recall that vertices in  R are ordered in decreasing order with respect to their coverage capacity). It guarantees at least 1−α. So:

Let now consider the other extreme case where Step (2b) of Algorithm 2 leaves outside less than 2⋅ℓ optimal vertices for any ℓ from k1 down to c. In this case (6) holds for any execution of Step 2 of the algorithm. Then, in Step 3, Algorithm 2 guarantees ratio:

Following the discussion above, for the value m of the so-produced solution holds:

The proof of the theorem is now concluded.

4 A PTAS for max k-vertex cover

Revisit (10). Some easy algebra allows to conclude that:

and this quantity is decreasing with ρ.

Since the discussion just above holds for any fixed constant ϵ<1−ρ, the following theorem holds immediately.