A Poisson Model for Entanglement Optimization in the Quantum Internet 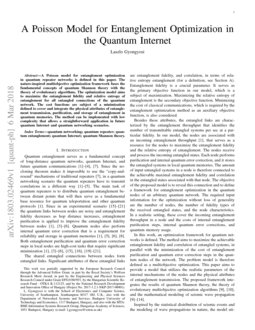 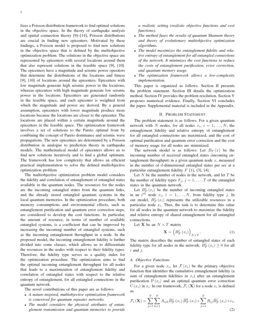 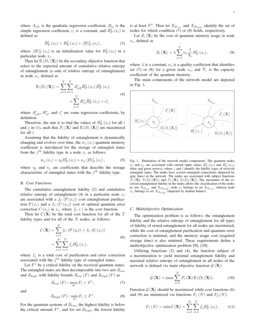 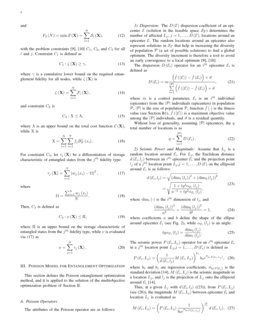 A fundamental concept of the quantum Internet is quantum entanglement. I...
Laszlo Gyongyosi, et al. ∙

From Holant to Quantum Entanglement and Back

Entanglement is not only important for understanding the fundamental pro...
Bingzhi Zhang, et al. ∙

Multilayer Optimization for the Quantum Internet

Quantum entanglement serves as a fundamental concept of long-distance quantum networks, quantum Internet, and future quantum communications [1, 2, 3, 4, 7]. Since the no-cloning theorem makes it impossible to use the “copy-and-resend” mechanisms of traditional repeaters [7], in a quantum networking scenario the quantum repeaters have to transmit correlations in a different way [1, 2, 3, 4, 5]. The main task of quantum repeaters is to distribute quantum entanglement between distant points that will then serve as a fundamental base resource for quantum teleportation and other quantum protocols [1]. Since in an experimental scenario [15, 16, 17, 18, 19, 20, 21] the quantum links between nodes are noisy and entanglement fidelity decreases as hop distance increases, entanglement purification is applied to improve the entanglement fidelity between nodes [1, 3, 4, 5, 6]. Quantum nodes also perform internal quantum error correction that is a requirement for reliability and storage in quantum memories [1, 5, 6, 8]. Both entanglement purification and quantum error correction steps in local nodes are high-cost tasks that require significant minimization [1, 3, 4, 5, 6, 15, 16, 19, 20, 21].

In this work, an optimization framework for quantum networks is defined. The method aims to maximize the achievable entanglement fidelity and correlation of entangled systems, in parallel with the minimization of the cost of entanglement purification and quantum error correction steps in the quantum nodes of the network. The problem model is therefore defined as a multiobjective optimization. This paper aims to provide a model that utilizes the realistic parameters of the internal mechanisms of the nodes and the physical attributes of entanglement transmission. The proposed framework integrates the results of quantum Shannon theory, the theory of evolutionary multiobjective optimization algorithms [9, 10], and the mathematical modeling of seismic wave propagation [9, 10, 11, 12, 13, 14].

Inspired by the statistical distribution of seismic events and the modeling of wave propagations in nature, the model utilizes a Poisson distribution framework to find optimal solutions in the objective space. In the theory of earthquake analysis and spatial connection theory

The novel contributions of this paper are as follows:

Let BjF(xi) be the number of incoming entangled states in an ith node xi, i=1,…,N, from fidelity type j. In our model, BjF(xi) represents the utilizable resources in a particular node xi. Thus, the task is to determine this value for all nodes in the quantum network to maximize the fidelity and relative entropy of shared entanglement for all entangled connections.

Let X be an N×T matrix

The matrix describes the number of entangled states of each fidelity type for all nodes in the network, BjF(xi)≥0 for all i and j.

For a given node xi, let F(xi) be the primary objective function that identifies the cumulative entanglement fidelity (a sum of entanglement fidelities in xi) after an entanglement purification P(xi) and an optimal quantum error correction C(xi) in xi. In our framework, Fi(X) for a node xi is defined as

where ⟨B⟩jF(xi) is an initialization value for BjF(xi) in a particular node xi.

Assuming that the fidelity of entanglement is dynamically changing and evolves over time, the wj(xi) quantum memory coefficient is introduced for the storage of entangled states from the jth fidelity type in a node xi as follows:

where ηj and κj are coefficients that describe the storage characteristic of entangled states with the jth fidelity type.

The cumulative entanglement fidelity (2) and cumulative relative entropy of entanglement (4) in a particular node xi are associated with a fC(P(xi)) cost entanglement purification P(xi) and a fC(C(xi)) cost of optimal quantum error correction C(xi) in xi, where fC(⋅) is the cost function.

where fj is a total cost of purification and error correction associated with the jth fidelity type of entangled states.

Let F∗ be a critical fidelity on the received quantum states. The entangled states are then decomposable into two sets Slow and Shigh with fidelity bounds Slow(F) and Shigh(F) as

For the quantum systems of Slow, the highest fidelity is below the critical amount F∗, and for set Shigh, the lowest fidelity is at least F∗. Then let XSlow and XShigh identify the set of nodes for which condition (7) or (8) holds, respectively.

Let Si(X) be the cost of quantum memory usage in node xi, defined as

where λ is a constant, αi is a quality coefficient that identifies set (7) or (8) for a given node xi, and Υi is the capacity coefficient of the quantum memory.

The main components of the network model are depicted in Fig. 1.

Utilizing functions (2) and (4), the function subject of a maximization to yield maximal entanglement fidelity and maximal relative entropy of entanglement in all nodes of the network is defined via main objective function G(X):

Function G(X) should be maximized while cost functions (6) and (9) are minimized via functions F1(N) and F2(N):

where γ is a cumulative lower bound on the required entanglement fidelity for all nodes, while ζ(X) is

and constraint C2 is

where Λ is an upper bound on the total cost function C(X), while X is

For constraint C3, let τj(X) be a differentiation of storage characteristic of entangled states from the jth fidelity type:

Then, C3 is defined as

where Π is an upper bound on the storage characteristic of entangled states from the jth fidelity type, while ν is evaluated via (17) as

This section defines the Poisson entanglement optimization method, and it is applied to the solution of the multiobjective optimization problem of Section II.

The attributes of the Poisson operator are as follows:

Without loss of generality, assuming |P| epicenters, the q total number of locations is as

Assume that Lj is a random location around Ei. For Lj, the Euclidean distance d(Ei,lj) between an ith epicenter Ei and the projection point lj of a jth location point Lj,j=1,…,D(E) on the ellipsoid around Ei is as follows:

where dimi(⋅) is the ith dimension of lj, and

where coefficients a and b define the shape of the ellipse around epicenter Ei (see Fig. 2), while αEi(lj) is an angle:

The seismic power P(Ei,Lj) operator for an ith epicenter Ei in a jth location point Lj,j=1,…,D(Ei) is defined as

where b0 and b1 are regression coefficients, σlnP(Ej)

is the standard deviation

[14], M(Ei,Lj) is the seismic magnitude in a location Lj, and lj is the projection of Lj onto the ellipsoid around Ei [14].

Let LEij be the location point where the seismic power P(Ei,LEij) is maximal for a given epicenter Ei. Let P∗(Ei) be the maximal seismic power,

Assuming that |P| epicenters, E1,…,|P| exist in the system, let identify by Pmax(E′) the epicenter E′ with a maximal seismic power among as

with magnitude M(E′,LE′j), where LE′j is the location point where the seismic power Pmax(E′) is maximal yielded for E′.

where E′ is the highest seismic power epicenter with magnitude M(E′,LE′j), ~f(E′) is the minimum objective value among the |P| epicenters, and M is a control parameter defined as

where LEij provides the maximal seismic power for an ith epicenter Ei, functions ~f(Ei) and ~f(E′) are the fitness values (see Section A-B1) for the current epicenter Ei and for the highest seismic power epicenter E′, and ϑ is a residual quantity.

Assume that Ei is a current epicenter (solution) and Rk and Rl are two random reference points around Ei. Using the C(Ei) cumulative seismic magnitude ((30)) of an epicenter Ei, the generation of a new epicenter Ep is as follows:

where Ei is a current epicenter, Rk and Rl are random reference points, d(⋅) is the Euclidean distance function, cw(Ei,Rk) and cw(Rk,Rl) are weighting coefficients between epicenters Ei and Rk and between Rk and Rl, and θ(ℓEi,Rk,ℓRk,Rl) is the angle between lines ℓEi,Rk and ℓRk,Rl:

Without loss of generality, using (32), a Poissonian distance function D(Ep) for the finding of new epicenter Ep is defined via a P Poisson distribution [12, 13] as follows:

For a large set of reference points, only those reference points that are within the r(Ei) radius around the current solution Ei are selected for the determination of the new solution Ep. This radius is defined as

where ~M is the average magnitude,

Q1 and Q2 are constants, and χ is a normalization term. Motivated by the corresponding seismologic relations of the Dobrovolsky-Megathrust radius formula [13], the constants in (37) are selected as Q1=0.414 and Q2=1.696.

In the relevance range r(Ei) of (37), the weights of reference points are determined by the seismic power function (26).

The hypocentral of an epicenter is aimed to increase the diversity of population by a randomization.

The D(Ei) locations around the cumulative magnitude C(Ei) of Ei are generated by (39) through all the randomly selected Y dimensions, where Y is as follows [9, 10]:

The process is repeated for all Ei.

is a Poisson random number with distribution coefficients k and λ. Given that it is possible that using (41) some randomly generated locations will be out of the feasible space SF, a normalization operator N(⋅) of Ldimk(Ei)r is defined to keep the new locations around dimk(Ei) in SF, as follows [9, 10]:

where Bklow and Bkup are lower and upper bounds on the boundaries of locations in a kth dimension, and mod(⋅) is to a modular arithmetic function. The procedure is repeated for the randomly selected t=U(1,dim(Ei)) dimensions of Ei, for ∀i.

The method of convergence of solutions in the Poisson optimization is summarized in Method 1.

The algorithmical framework that utilizes the Poisson entanglement optimization method for the problem statement presented in Section II is defined in Algorithm 1.

Sub-procedure 1 of step 5 is discussed in the Appendix.

To achieve the minimization of classical communications required by the entanglement optimization, the S-metric (or hypervolume indicator) is integrated, which is a quality measure for the solutions or a contribution of a single solution in a solution set [9, 10] By definition, this metric identifies the size of dominated space (size of space covered).

where L is a Lebesgue measure, notation b∠a means a dominates b (or b is dominated by a), and xref is a reference point dominated by all valid solutions in the solution set [9, 10].

For a given solution ri, the S-metric identifies the size of space dominated by ri but not dominated by any other solution, without loss of generality as:

where C1(xi) is the cost associated with the first type of classical communications related to a xi.

The second objective function, f2, is associated with the cost of the second type of classical communications that is related to entanglement purification:

where C2(xi) is the cost associated with the second type of classical communications with respect to xi.

Assuming objective functions f1 and f2, the S(ri) of a particular solution ri is as follows:

Given that the S-metric is calculated for the solutions, a set of nearest neighbors that restrict the space can be determined. Since the volume of this space can be quantified by the hypervolume, the solutions that satisfy objectives f1 and f2 can be found by utilizing (48).

The computational complexity of the Poissonian optimization method is derived as follows: Given that |P| epicenters are generated in the search space and that the number of locations for an ith epicenter Ei is determined by the dispersion operator D(Ei), the resulting computational complexity at a total number of locations q=∑|P|i=1D(Ei) (see (22)) is

since after a sorting process the locations for a given epicenter Ei can be calculated with complexity O(D(Ei)), where d is the number of objectives.

Considering that in our setting d=2, the total complexity is

The resolution of the problem shown in Section II using the Poissonian entanglement optimization framework of Section III is as follows:

Specifically, function (10) for the XSlow-type nodes is rewritten as

Similarly, for the XSlow-type nodes, function (10) is as follows: