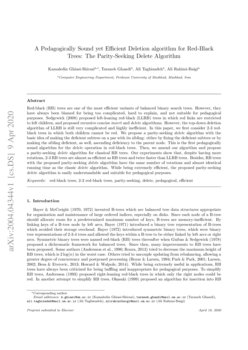 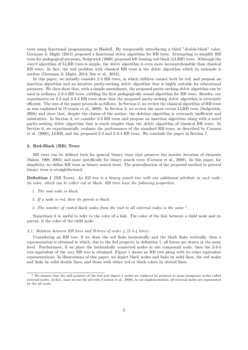 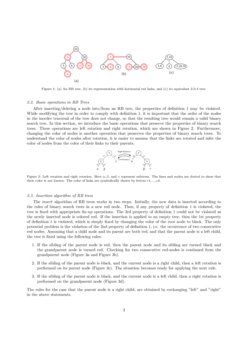 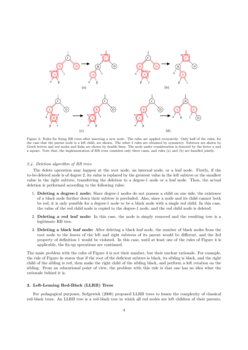 We show how a few modifications to the red-black trees allow for O(1) wo...
Amr Elmasry, et al. ∙

Given a graph whose nodes may be coloured red, the parity of the number ...
Nils Vortmeier, et al. ∙

We present an algorithm that allows for find-closest-point and kNN-style...
Ingo Wald, et al. ∙

Suppose that the outcomes of a roulette table are not entirely random, i...
George Barmpalias, et al. ∙

In this third paper, we revisit the question to which extent the propert...
Maurice Margenstern, et al. ∙

Bayer & McCreight (1970, 1972) invented B-trees which are balanced tree data structures appropriate for organization and maintenance of large ordered indices, especially on disks. Since each node of a B-tree should allocate room for a predetermined maximum number of keys, B-trees are memory-inefficient. By linking keys of a B-tree node by left arcs, Bayer (1971) introduced a binary tree representation of B-trees which avoided their storage overhead. Bayer (1972) introduced symmetric binary trees, which were binary tree representations of 2-3-4 trees and allowed the keys within a B-tree to be either linked by left arcs or right arcs. Symmetric binary trees were named red-black (RB) trees thereafter when Guibas & Sedgewick (1978) proposed a dichromatic framework for balanced trees. Since then, many improvements to RB trees have been proposed. Some authors (Andersson et al., 1990; Roura, 2013) tried to decrease the maximum height of RB trees, which is 2log(n) in the worst case. Others tried to uncouple updating from rebalancing, allowing a greater degree of concurrency and postponed processing (Boyar & Larsen, 1994; Park & Park, 2001; Larsen, 2002; Besa & Eterovic, 2013; Howard & Walpole, 2014). While being extremely useful in applications, RB trees have always been criticized for being baffling and inappropriate for pedagogical purposes. To simplify RB trees, Andersson (1993) proposed right-leaning red-black trees in which only the right nodes could be red. In another attempt to simplify RB trees, Okasaki (1999) proposed an algorithm for insertion into RB trees using functional programming in Haskell. By temporarily introducing a third ”double-black” color, Germane & Might (2014) proposed a functional delete algorithm for RB trees. Attempting to simplify RB trees for pedagogical purposes, Sedgewick (2008) proposed left-leaning red-black (LLRB) trees. Although the insert algorithm of LLRB trees is simple, the delete algorithm is even more incomprehensible than classical RB trees. In fact, the real problem with classical RB trees is the delete algorithm which its rationale is unclear (Germane & Might, 2014; Sen et al., 2016).

RB trees can be defined both for general binary trees that preserve the inorder iteration of elements (Sahni, 1998, 2005) and more specifically for binary search trees (Cormen et al., 2009). In this paper, for simplicity, we define RB trees as binary search trees. The generalization of the proposed method to general binary trees is straightforward.

An RB tree is a binary search tree with one additional attribute in each node: its color, which can be either red or black. RB trees have the following properties:

Considering an RB tree, if we draw the red links horizontally and the black links vertically, then a representation is obtained in which, due to the 3rd property in definition 1, all leaves are drawn at the same level. Furthermore, if we place the horizontally connected nodes in one compound node, then the 2-3-4 tree equivalent of the very RB tree is obtained. Figure 4 shows an RB tree along with its other equivalent representations. In illustrations of this paper, we depict black nodes and links by solid lines, the red nodes and links by solid double lines, and those with either red or black colors by dotted lines.

The rules for the case that the parent node is a right child, are obtained by exchanging ”left” and ”right” in the above statements.

The delete operation may happen at the root node, an internal node, or a leaf node. Firstly, if the to-be-deleted node is of degree 2, its value is replaced by the greatest value in the left subtree or the smallest value in the right subtree, transferring the deletion to a degree-1 node or a leaf node. Then, the actual deletion is performed according to the following rules:

The main problem with the rules of Figure 16 is not their number, but their unclear rationale. For example, the rule of Figure (e)e states that if the root of the deficient subtree is black, its sibling is black, and the right child of the sibling is red, then make the right child of the sibling black, and perform a left rotation on the sibling. From an educational point of view, the problem with this rule is that one has no idea what the rationale behind it is.

For pedagogical purposes, Sedgewick (2008) proposed LLRB trees to lessen the complexity of classical red-black trees. An LLRB tree is a red-black tree in which all red nodes are left children of their parents. LLRB trees have a one-to-one correspondence with 2-3 trees. Figure 19 shows an example of this one-to-one correspondence. Sedgewick (2008) proposed a neat insertion algorithm and taught it in his MOOC algorithms course on Coursera (Wayne & Sedgewick, 2012). However, as we will show, the deletion algorithm of LLRB is neither efficient nor suitable for educational purposes.

As in classical RB trees, the insert algorithm of LLRB trees starts by inserting a new leaf node into a binary search tree with the color red. In addition to the possibility of having double red links, which is a violation of the 2nd property of RB trees in definition 1, the inserted node could be a right child, violating the sole new constraint of LLRB trees. Sedgewick (2008) proposed the three operations of left rotation, right rotation, and color flip to transform the resulting tree into a correct LLRB tree (Figure 23). Note that in contrast to classical RB trees where there were 3 other symmetric cases, since LLRB trees do not permit red right children, here all cases are the three ones shown in Figure 23. One of the important weaknesses of the insert algorithm of LLRB is that these rules should be applied until reaching the root node, even though it is possible to infer that the tree has been fixed up long before reaching the root. The reason for this inefficiency is that the insert algorithm is implemented recursively and there is no way to empty the call stack except throwing an exception. In fact, our attempt to modify the code of LLRB to terminate the fix-up operation by throwing an exception led to the severe slow down of the algorithm.

Sedgewick (2008) proposed a recursive top-down algorithm for deletion in LLRB trees. To delete a node, the algorithm starts from the root node and moves left/right towards the to-be-deleted node. The algorithm prepares the scene to apply the actual deletion to a red node and, therefore, as it descends the tree it ensures that either the current node or its left child is red. If it is not the case, the algorithm enforces this property by two methods named ”moveRedLeft” and ”moveRedRight”. As the deletion algorithm descends the tree, it modifies the tree extensively and causes immense changes. This is awful since it is possible that the query node does not exist, or it is already red and, therefore, can be simply deleted. Figure 24 shows an example of a tree in which the deletion operation is as simple as solely deleting the node with the given key, while the delete algorithm of LLRB engages in immense modifications to the tree.

To insert a value in a 2-3 RB tree, we initially insert it with the color red in the position determined by the rules of binary search trees. Then, if necessary, we perform fix-up operations until we obtain a legitimate 2-3 RB tree. For two reasons the resulting tree, after the initial insertion, might not be a legitimate 2-3 RB tree: (I) the parent of the just-inserted node is red, or (II) its sibling is red. Let us denote the node of the tree which has one of these problems by x. Our proposed rules for case I, in which the node x and its parent are both red, are shown in Figure (a)a and Figure (b)b. In case II, in which the just-inserted node and its sibling are red, we propose a color-flip operation as shown in Figure (c)c. We terminate the fix-up operations as soon as the color of x becomes black. We make root the child of a dummy node with the color black, to ensure that a black node is eventually visited, and the procedure terminates. Finally, we reset the color of the root to black.

The fix-up operations of the insert algorithm of 2-3 RB trees terminate.

As is clear from Figure 32, at each step, the node marked with x becomes one level closer to the root node. Therefore, the maximum possible number of fix-up operations is the height of the tree.

In this section, we describe our proposed parity-seeking delete algorithm in the context of 2-3 RB trees. First, according to the deletion rules of binary search trees, the initial delete operation is transferred to a leaf or a degree-1 node. Now, if the degree of the to-be-deleted node is one, then, from property 3 of definition 1, it follows that its whole subtree is a single red child. Therefore, to delete a degree-1 node, it suffices to delete its red child and put its value in its parent. Now, consider the case of deleting a leaf node. If the leaf node is red, then it can be simply deleted and the resulting tree is a valid 2-3 RB tree (Figure 35). The hard case is deleting a black leaf node. First, let us define deficient subtrees.

A subtree rooted at a node x is deficient if (1) neglecting the color of x, it is a 2-3 RB tree, and (2) the number of visited black nodes from x to the leaves is one less than that of x’s sibling.

Case I is simply handled by changing the color of x to black, which resolves the deficiency of x. In the following subsections, we explain our algorithm for the other two cases.

4.2.1 Case II: both the root of the deficient subtree, and its sibling are black

. Please note that at the moment we are fixing the subtree rooted at the common parent of

x and y, and a potential vertical double-red link between y and its parent will be resolved when deficiency reaches y’s grandparent. If none of y’s children are red, the deficiency is transferred to the parent of x and y (Figure (b)b). Please note that there is no special handling for the case that the whole tree becomes deficient as it is automatically handled by cases I and II.

4.2.2 Case III: the root of the deficient subtree is black and its sibling is red

In this case x is black and y is red. Therefore, children of y are black. In this case, we can neither fix the deficiency of x as x is black, nor can make the sibling deficient as y is red. We perform a rotation on the common parent of x and y so that the new sibling of x becomes one of the children of y. Since the new sibling of x is black, the algorithm returns to case II. Figure (e)e illustrates this situation. In contrast to the insert algorithm in which the considered node was steadily moving up the tree, in the delete algorithm the deficient subtree can both move up or down the tree. In the following proposition, we prove that, despite this, the delete algorithm of 2-3 RB trees terminates.

The proposed parity-seeking algorithm for deletion in 2-3 RB trees terminates and generates a legitimate 2-3 RB tree.

We need to prove that, in all the three cases of the delete algorithm, the problem of deficiency is resolved. We have: