In a minimum cost submodular cover problem (MinSMC), given a monotone non-decreasing submodular function f 2^V →ℤ^+, a cost function c: V→ℝ^+, an integer k≤ f(V), the goal is to find a subset A⊆ V with the minimum cost such that f(A)≥ k. MinSMC has a lot of applications in machine learning and data mining. In this paper, we design a parallel algorithm for MinSMC which obtains a solution with approximation ratio at most H(min{Δ,k})/1-5ε with probability 1-3ε in O(log mlog nlog^2 mn/ε^4) rounds, where Δ=max_v∈ Vf(v), H(·) is the Hamornic number, n=f(V), m=|V| and ε is a constant in (0,1/5). This is the first paper obtaining a parallel algorithm for the weighted version of the MinSMC problem with an approximation ratio arbitrarily close to H(min{Δ,k}). 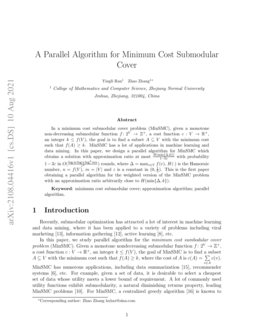 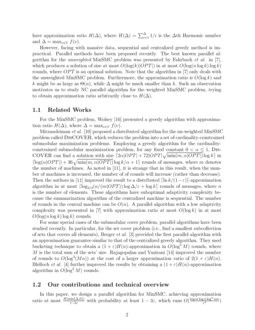 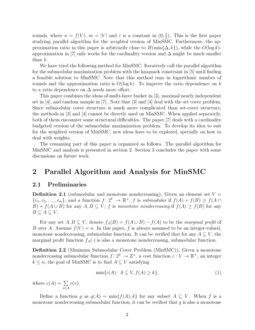 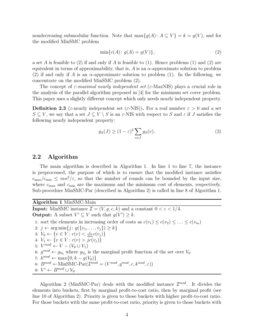 In this work, we give a new parallel algorithm for the problem of maximi...
Alina Ene, et al. ∙

The Power of Adaptivity for Stochastic Submodular Cover

In the stochastic submodular cover problem, the goal is to select a subs...
Rohan Ghuge, et al. ∙

What approximation ratio can we achieve for the Facility Location proble...
Zeev Nutov, et al. ∙

Recently, submodular optimization has attracted a lot of interest in machine learning and data mining, where it has been applied to a variety of problems including viral marketing [13], information gathering [12]

In this paper, we study parallel algorithm for the minimum cost sumbodular cover problem (MinSMC). Given a monotone nondecreasing submodular function f:2V→Z+, a cost function c:V→R+, an integer k≤f(V), the goal of MinSMC is to find a subset A⊆V with the minimum cost such that f(A)≥k, where the cost of A is c(A)=∑v∈Ac(v). MinSMC has numerous applications, including data summarization [15], recommender systems [6], etc. For example, given a set of data, it is desirable to select a cheapest set of data whose utility meets a lower bound of requirement. A lot of commonly used utility functions exhibit submodularity, a natural diminishing returns property, leading MinSMC problems [10]. For MinSMC, a centralized greedy algorithm [16] is known to have approximation ratio H(Δ), where H(Δ)=∑Δi=11/i is the Δth Harmonic number and Δ=maxv∈Vf(v).

However, facing with massive data, sequential and centralized greedy method is impractical. Parallel methods have been proposed recently. The best known parallel algorithm for the unweighted MinSMC problem was presented by Fahrbach et al. in [7], which produces a solution of size at most O(log(k)|OPT|) in at most O(log(nlogk)logk) rounds, where OPT is an optimal solution. Note that the algorithm in [7] only deals with the unweighted MinSMC problem. Furthermore, the approximation ratio is O(logk) and k might be as large as Θ(n), while Δ might be much smaller than k. Such an observation motivates us to study NC parallel algorithm for the weighted MinSMC problem, trying to obtain approximation ratio arbitrarily close to H(Δ).

For the MinSMC problem, Wolsey [16] presented a greedy algorithm with approximation ratio H(Δ), where Δ=maxv∈Vf(v).

Mirzasoleiman et al. [10] proposed a distributed algorithm for the un-weighted MinSMC problem called DisCOVER, which reduces the problem into a set of cardinality-constrained submodular maximization problems. Employing a greedy algorithm for the cardinality-constrained submodular maximization problem, for any fixed constant 0<α≤1, DisCOVER can find a solution with size ⌈2α|OPT|+72|OPT|√min(m,α|OPT|)logk⌉ in ⌈log(α|OPT|)+36√min(m,α|OPT|)logk/α+1⌉ rounds of messages, where m denotes the number of machines. As noted in [11], it is strange that in this result, when the number of machines is increased, the number of of rounds will increase (rather than decrease). Then the authors in [11] improved the result to a distributed ⌈lnk/(1−ε)⌉-approximation algorithm in at most ⌈log3/2(n/(m|OPT))logΔ/ε+logk⌉ rounds of messages, where n is the number of elements. These algorithms have suboptimal adaptivity complexity because the summarization algorithm of the centralized machine is sequential. The number of rounds in the central machine can be O(n). A parallel algorithm with a low adaptivity complexity was presented in [7] with approximation ratio at most O(logk) in at most O(log(nlogk)logk) rounds.

For some special cases of the submodular cover problem, parallel algorithms have been studied recently. In particular, for the set cover problem (i.e., find a smallest subcollection of sets that covers all elements), Berger et al. [3] provided the first parallel algorithm with an approximation guarantee similar to that of the centralized greedy algorithm. They used bucketing technique to obtain a (1+ε)H(n)-approximation in O(log5M) rounds, where M is the total sum of the sets’ size. Rajagopalan and Vazirani [14] improved the number of rounds to O(log3(Mn)) at the cost of a larger approximation ratio of 2(1+ε)H(n). Blelloch et al. [4] further improved the results by obtaining a (1+ε)H(n)-approximation algorithm in O(log2M) rounds.

1.2 Our contributions and technical overview

In this paper, we design a parallel algorithm for MinSMC, achieving approximation ratio at most H(min{Δ,k})1−5ε with probability at least 1−3ε, which runs O(logmlognlog2mnε4) rounds, where n=f(V), m=|V| and ε is a constant in (0,15). This is the first paper studying parallel algorithm for the weighted version of MinSMC. Furthermore, the approximation ratio in this paper is arbitrarily close to H(min{Δ,k}), while the O(logk)-approximation in [7] only works for the cardinality version and Δ might be much smaller than k.

We have tried the following method for MinSMC. Iteratively call the parallel algorithm for the submodular maximization problem with the knapsack constraint in [5] until finding a feasible solution to MinSMC. Note that this method runs in logarithmic number of rounds and the approximation ratio is O(logk). To improve the ratio dependence on k to a ratio dependence on Δ needs more effort.

This paper combines the ideas of multi-layer bucket in [3], maximal nearly independent set in [4], and random sample in [7]. Note that [3] and [4] deal with the set cover problem. Since submodular cover structure is much more complicated than set-cover structure, the methods in [3] and [4] cannot be directly used on MinSMC. When applied separately, both of them encounter some structural difficulties. The paper [7] deals with a cardinality budgeted version of the submodular maximization problem. To develop its idea to suit for the weighted version of MinSMC, new ideas have to be explored, specially on how to deal with weights.

The remaining part of this paper is organized as follows. The parallel algorithm for MinSMC and analysis is presented in section 2. Section 3 concludes the paper with some discussions on future work.

2 Parallel Algorithm and Analysis for MinSMC

For any set A,B⊆V, denote fA(B)=f(A∪B)−f(A) to be the marginal profit of B over A. Assume f(V)=n. In this paper, f is always assumed to be an integer-valued, monotone nondecreasing, submodular function. It can be verified that for any A⊆V, the marginal profit function fA(⋅) is also a monotone nondecreasing, submodular function.

The concept of ε-maximal nearly independent set (ε-MaxNIS) plays a crucial role in the analysis of the parallel algorithm proposed in [4] for the minimum set cover problem. This paper uses a slightly different concept which only needs nearly independent property.

For a real number ε>0 and a set S⊆V, we say that a set J⊆V∖S is an ε-NIS with respect to S and ε if J satisfies the following nearly independent property:

The main algorithm is described in Algorithm 1. In line 1 to line 7, the instance is preprocessed, the purpose of which is to ensure that the modified instance satisfies cmax/cmin≤mn2/ε, so that the number of rounds can be bounded by the input size, where cmax and cmin are the maximum and the minimum cost of elements, respectively. Sub-procedure MinSMC-Par (described in Algorithm 2) is called in line 8 of Algorithm 1.

In the pth while-loop of Algorithm 3, an ε-NIS with respect to Bp is found. After r while-loops, an ε-NIS with respect to B is obtained. For each while-loop of Algorithm 3, a for-loop is used to guess the size tp of the ε-NIS with respect to Bp. In the for-loop, a mean operation described in Algorithm 4 is called. As will be shown, if tp is correctly guessed, then ¯μp≤1−1.5¯ε, and the random set sampled in line 22 satisfies the property required by a nearly independent set. A set consisting of t elements is abbreviated as a t-set. When we say “select a t-set T from A uniformly and randomly”, it means that elements are selected sequentially from A until we have t elements at hand. So, any specific t-set T appears with probability P(T)=1|A|(|A|−1)⋯(|A|−t+1). Note that viewing T as an ordered set will facilitate its selection as well as the probabilistic computations.

Algorithm 4 uses the mean value of function It,A,B,τ,ϵ to measure the expected quality of a sampled set, where It,B,A,τ,ϵ is a random indicator function defined as follows. Given two sets A,B, a parameter τ, and a real number 0<ε<1, for a random t-set X which is selected from A uniformly and randomly, and an element x which is drawn uniformly at random from A∖X,

Given B,A,τ,ϵ, suppose t and t′ are two integers with t<t′. Then

Assume |A|=a. It can be calculated that

where the first inequality comes from the submodularity of function g, and the last inequality holds because x is sampled from A∖X⊇A∖X′ and function I is nonnegative. ∎

The following lemma shows that the mean value ¯μ in line 16 of Algorithm 3 can be used to bound E[It(X,x)].

The next lemma shows that the expected size of Ap decreases exponentially, which implies that in Algorithm 3, a bucket will become empty in at most log1+¯εm rounds.

The inequality is obvious if Ap+1=∅. In the following, assume Ap+1≠∅.

The following corollary shows that when the inner while loop of Algorithm 2 halts, the primary bucket At is empty with a certain probability.

After Jℓt is computed in line 14 of Algorithm 2, the primary bucket At is empty with probability at least 1−ε/T2.

The lemma is proved. ∎

The next lemma shows that with a certain probability, the set Jt′t computed in line 14 of Algorithm 2 satisfies the nearly independent property defined in (3).

Consider the call of Algorithm 3 when the input parameter B is Bt′t. Note that B1=Bt′t. We first prove that with probability at least 1−nδ, the set Tp sampled in line 22 of Algorithm 3 satisfies

where Bp is the set in line 23. For clarity of statement, denote the size of Tp as t∗. Inequality (8) is obviously true if t∗=0 or 1. Next, suppose t∗≥2. Note that line 22 of Algorithm 3 is executed after the for loop is jumped out. Further note that the jump-out must be because of line 17. In fact, if the number of iterations of the for loop has reached log1+¯εm, then tp=|Ap|, and every Xi in Algorithm 4 is Ap, resulting in ¯μp=0 (see (4)), at which time the condition of line 17 is satisfied. In the previous round of the for loop, that is, when tp tries the value ¯t=t∗/(1+¯ε), we must have ¯μp>1−1.5¯ε, and thus

By the definition of Ii,Bp,Ap,τ,ϵ(X,x) and Markov’s inequality,

Combining inequalities 10 and 11, we have

Combining inequalities (12), (13) and the union bound, with probability at least 1−nδ

where the last inequality comes from the choice of ¯ε. By line 10 and line 14 of Algorithm 2, when the computation enters Algorithm 3, we have gB1(v)≤τ for any v in the input set A, with respect to the input parameter τ. It follows that gB1(v)≤τ holds for every v∈Tp. Combining this with (14), inequality 8 is proved.

Then, by the union bound, and similar to the proof of Corollary 2.8, with probability at least 1−δnr,

where the last inequality comes from B1=Bt′t and Jt′t=⋃rp=1Tp. ∎

For simplicity of statement, we assume that every inner while loop is executed ℓ times. Denote by Dt=J1t∪J2t∪…∪Jℓt for any t≤T. The following corollary shows that the expected cost effectiveness of {Dt} decreases geometrically.

By Lemma 2.9 and the union bound, with probability at least 1−δnrℓ,