In this paper, we propose a numerical method of computing an integral whose integrand is a slowly decaying oscillatory function. In the proposed method, we consider a complex analytic function in the upper-half complex plane, which is defined by an integral of the Fourier-Laplace transform type, and we obtain the desired integral by the analytic continuation of this analytic function onto the real axis using a continued fraction. We also remark that the proposed method is related to hyperfunction theory, a theory of generalized functions based on complex function theory. Numerical examples show the effectiveness of the proposed method. 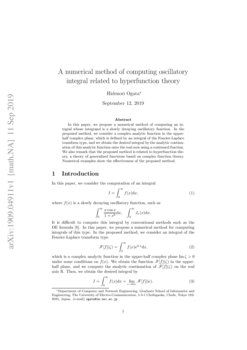 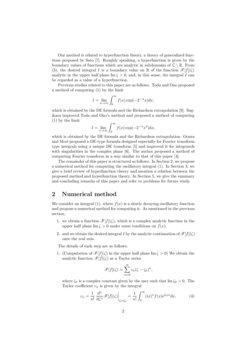 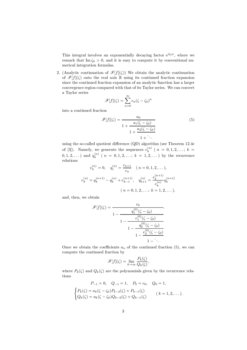 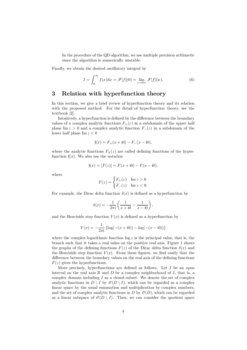 In this paper, we propose a numerical method of computing a Hadamard fin...
Hidenori Ogata, et al. ∙

Efficient extraction of resonant states in systems with defects

Reconstructing Stieltjes functions from their approximate values: a search for a needle in a hay stack

In this paper we propose a method for computing the Faddeeva function w(...
Mohammad Al Azah, et al. ∙

In this paper, we consider the computation of an integral

where f(x) is a slowly decaying oscillatory function, such as

It is difficult to compute this integral by conventional methods such as the DE formula [8]. In this paper, we propose a numerical method for computing integrals of this type. In the proposed method, we consider an integral of the Fourier-Laplace transform type

Previous studies related to this paper are as follows. Toda and Ono proposed a method of computing (1) by the limit

which is obtained by the DE formula and the Richardson extrapolation [9]. Sugihara improved Toda and Ono’s method and proposed a method of computing (1) by the limit

which is obtained by the DE formula and the Richardson extrapolation. Ooura and Mori proposed a DE-type formula designed especially for Fourier transform type integrals using a unique DE transform

[5] and improved it for integrands with singularities in the complex plane [6]. The author proposed a method of computing Fourier transform in a way similar to that of this paper [4].

We consider an integral (1), where f(x) is a slowly decaying oscillatory function and propose a numerical method for computing it. As mentioned in the previous section,

The details of each step are as follows.

Finally, we obtain the desired oscillatory integral by

where the analytic functions F±(z) are called defining functions of the hyperfunction f(x). We also use the notation

For example, the Dirac delta function δ(x) is defined as a hyperfunction by

where the complex logarithmic function logz is the principal value, that is, the branch such that it takes a real value on the positive real axis. Figure 1 shows the graphs of the defining functions F(z) of the Dirac delta function δ(x) and the Heaviside step function Y(x). From these figures, we find easily that the difference between the boundary values on the real axis of the defining functions F(z) gives the hyperfunctions.

More precisely, hyperfunctions are defined as follows. Let I be an open interval on the real axis R and D be a complex neighborhood of I, that is, a complex domain including I as a closed subset. We denote the set of complex analytic functions in D∖I by O(D∖I), which can be regarded as a complex linear space by the usual summation and multiplication by complex numbers, and the set of complex analytic functions in D by O(D), which can be regarded as a linear subspace of O(D∖I). Then, we can consider the quotient space B(I)≡O(D∖I)/O(D). We call an element of B(I), that is, an equivalence class [F(z)] (F(z)∈O(D∖I)) a hyperfunction on I and denote it by

where we call F(z) a defining function of the hyperfunction f(x). We also use the notation

if the limit on the right hand side exists. We do not define the value f(x0) if the limit does not exist.

We return to the discussion on the method of computing the oscillatory integral (1). From (6) and the fact that F[f](ζ) is a complex analytic function in the upper half plane Imζ>0, we can regard the desired oscillatory integral I as the value at ξ=0 of the hyperfunction f(x)=[F+(ζ),F−(ζ)] whose defining functions are F+(ζ)=F[f](ζ) and F−(ζ)=0.

In this section, we discuss show some numerical examples that illustrate the effectiveness of the proposed method. All the computations were performed using programs coded in C++ with 100 decimal digit precision, where we use the multiple precision arithmetic library exflib [1].

We computed the oscillatory integrals

Here, we point out an interesting fact. Since we took ζ0=i, the integral in (4) which gives the Taylor coefficients cn is given by

As a comparison with the results by a previous method, we computed some of the integrals by the Euler transform for computing alternating series. Namely, we express the desired oscillatory integral as

Problems for future study related to this paper are, for example, theoretical error estimate of the proposed method and the reduction of the computational cost of analytic continuation, which needs multiple precision arithmetic in the QD algorithm applied to the conversion of a Taylor series into a continued fraction.