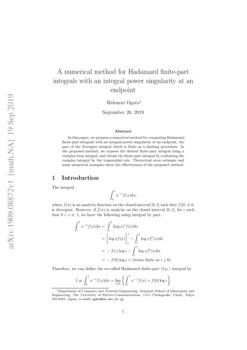 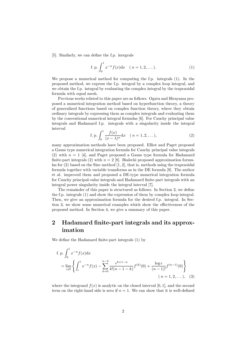 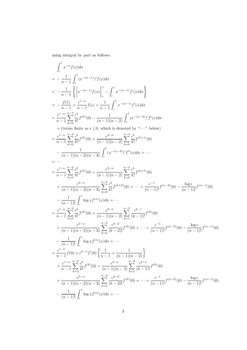 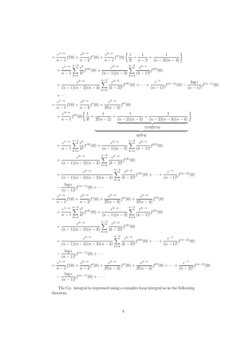 In this paper, we propose a numerical method of computing a Hadamard fin...
Hidenori Ogata, et al. ∙

In this paper, we propose a numerical method of computing an Hadamard fi...
Hidenori Ogata, et al. ∙

In this paper, we propose a numerical method of computing an integral wh...
Hidenori Ogata, et al. ∙

In this paper, we introduce the cubature formulas for Stochastic Volterr...
Qi Feng, et al. ∙

Efficient extraction of resonant states in systems with defects

We propose a topology optimisation of acoustic devices that work in a ce...
Yuta Honshuku, et al. ∙

Therefore, we can define the so-called Hadamard finite-part (f.p.) integral by

[5]. Similarly, we can define the f.p. integrals

Previous works related to this paper are as follows. Ogata and Hirayama proposed a numerical integration method based on hyperfunction theory, a theory of generalized functions based on complex function theory, where they obtain ordinary integrals by expressing them as complex integrals and evaluating them by the conventional numerical integral formulas [6]. For Cauchy principal value integrals and Hadamard f.p. integrals with a singularity inside the integral interval

many approximation methods have been proposed. Elliot and Paget proposed a Gauss type numerical integration formula for Cauchy principal value integrals (2) with n=1 [4], and Paget proposed a Gauss type formula for Hadamard finite-part integrals (2) with n=2 [8]. Bialecki proposed approximation formulas for (2) based on the Sinc method [2, 1], that is, methods using the trapezoidal formula together with variable transforms as in the DE formula [9]. The author et al. improved them and proposed a DE-type numerical integration formula for Cauchy principal-value integrals and Hadamard finite-part integrals with an integral power singularity inside the integral interval [7].

2 Hadamard finite-part integrals and its approximation

We define the Hadamard finite-part integrals (1) by

where the integrand f(x) is analytic on the closed interval [0,1], and the second term on the right-hand side is zero if n=1. We can show that it is well-defined using integral by part as follows.

The f.p. integral is expressed using a complex loop integral as in the following theorem.

We suppose that f(z) is analytic in a complex domain D containing the closed interval [0,1] in its interior. Then, the f.p. integral (3) is expressed as

where C is a closed complex integral path in D encircling the interval [0,1] in the positive sense, and the second term on the right-hand side of (4) is zero if n=1.

Using Cauchy’s integral theorem, we have

From Table 1, we have

The integral on C(0)ϵ is written as

The first integral on the right-hand side is written as

since z−nf(z)logz is analytic near z=1. Summarizing the above calculations, we have

The complex integral in (4) is the integral of an analytic function over an interval of the length of one period, and it is accurately approximated by the trapezoidal formula with equal mesh. Using a parameterization of the closed integral path

where φ(u) is a periodic function of period up, we obtain the following approximation formula for the f.p. integral.

where the second term on the right-hand side is zero if n=1.

Then, we have the following inequality for arbitrary 0<d′<d.

This theorem says that the approximation (6) converges exponentially as N increases if the integrand function f(x) is analytic on [0,1] and the integral path C is an analytic curve.

We computed the integrals

where the second term on the right-hand side of the integral (2) is zero if n=1, by the proposed method. All the computations were performed using programs coded in C++ with double precision working. The complex integral path C was taken as the ellipse

We can also give approximation methods for f.p. integrals with a non-integral power singularity and f.p. integrals over a half-infinite interval in a way similar to this paper. They will be reported in other papers.