A Novel Secure Authentication Scheme for Heterogeneous Internet of Thing

Today, Internet of Things (IoT) technology is being increasingly popular which is applied in a wide range of industry sectors such as healthcare, transportation and some critical infrastructures. With the widespread applications of IoT technology, people's lives have changed dramatically. Due to its capabilities of sensitive data-aware, information collection, communication and processing, it raises security and privacy concerns. Moreover, a malicious attacker may impersonate a legitimate user, which may cause security threat and violation privacy. In allusion to the above problems, we propose a novel and lightweight anonymous authentication and key agreement scheme for heterogeneous IoT, which is innovatively designed to shift between the public key infrastructure (PKI) and certificateless cryptography (CLC) environment. The proposed scheme not only achieves secure communication among the legal authorized users, but also possesses more attributes with user anonymity, non-repudiation and key agreement fairness. Through the security analysis, it is proved that the proposed scheme can resist replay attacks and denial of service (DOS) attacks. Finally, the performance evaluation demonstrates that our scheme is more lightweight and innovative. 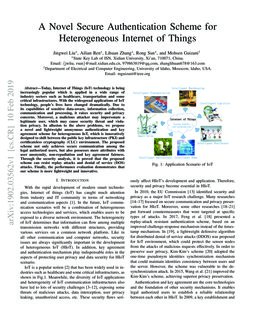 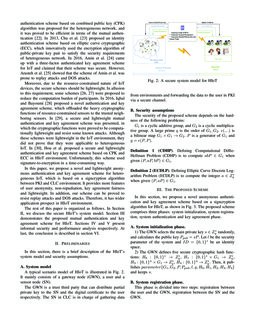 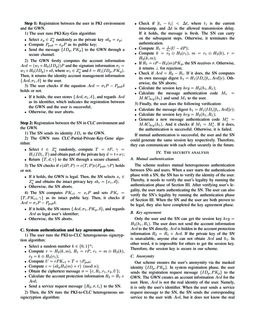 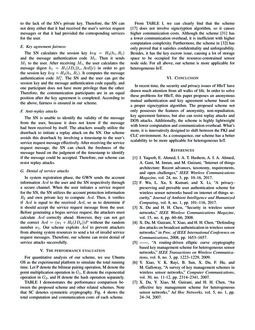 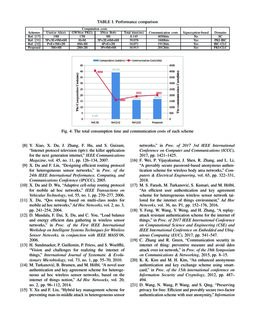 A Lightweight and Privacy-Preserving Authentication Protocol for Mobile Edge Computing

With the advent of the Internet-of-Things (IoT), vehicular networks and ...
Kuljeet Kaur, et al. ∙

Today, the Internet of Things (IoT) is one of the emerging technologies ...
V. Chegeni, et al. ∙

With the rapid development of modern smart technologies, Internet of things (IoT) has caught much attention from industry and IT community in terms of networking and communication aspects [1]. In the future, IoT communication scenarios will be a combination of heterogeneous access technologies and services, which enables users to be exposed to a diverse network environment. The heterogeneity of IoT determines that information can flow among multiple transmission networks with different structures, providing various services on a common network platform. Like in all other communication and computer networks, security issues are always significantly important in the development of heterogeneous IoT (HIoT). In addition, key agreement and authentication mechanism play indispensable roles in the aspects of protecting user privacy and data security for HIoT scenario.

IoT is a popular notion [2] that has been widely used in industries such as healthcare and some critical infrastructures, as shown in Fig.1. Meanwhile, the diversity of IoT applications and heterogeneity of IoT communication infrastructures also have led to lots of security challenges [3, 4, 5, 6, 7, 8, 9, 10, 11, 12], exposing some threats of malicious attacks, data interception, user privacy leaking, unauthorized access, etc. These security flaws seriously affect HIoT’s development and application. Therefore, security and privacy become essential in HIoT.

In 2010, the EU Commission [13] identified security and privacy as a major IoT research challenge. Many researches [14, 15, 16, 17] focused on secure communication and privacy preservation for HIoT. Moreover, some other researches [18, 19, 20, 21] put forward countermeasures that were targeted at specific types of attacks. In 2017, Feng et al. [18] presented a replay-attack resistant authentication scheme, based on an improved challenge-response mechanism instead of the timestamp mechanism. In [19], a lightweight defensive algorithm for distributed denial of service attacks (DDOS) was proposed for IoT environment, which could protect the sensor nodes from the attacks of malicious requests effectively. In order to preserve user privacy, Kim-Kim’s scheme [20] adopted the one-time pseudonym identities synchronization mechanism that could maintain identities consistency between users and the server. However, the scheme was vulnerable to the de-synchronization attack. In 2015, Wang et al. [21] improved the Kim-Kim’s scheme, achieving superior privacy preservation.

Authentication and key agreement are the core technologies and the foundation of other security mechanisms. It enables legal authorized users to establish a reliable relationship between each other in HIoT. In 2009, a key establishment and authentication scheme based on combined public key (CPK) algorithm was proposed for the heterogeneous network, and it was proved to be efficient in terms of the mutual authentication [22]. In 2013, Chu et al. [23] proposed an identity authentication scheme based on elliptic curve cryptographic (ECC), which innovatively used the encryption algorithm of public-private key pair to satisfy the security requirements of heterogeneous network. In 2016, Amin et al. [24] came up with a three-factor authenticated key agreement scheme for IoT and claimed that their scheme was secure. However, Arasteh et al. [25] showed that the scheme of Amin et al. was prone to replay attacks and DOS attacks.

Moreover, due to the resource-constrained nature of IoT devices, the secure schemes should be lightweight. In allusion to this requirement, some schemes [26, 27] were proposed to reduce the computation burden of participants. In 2016, Iqbal and Bayoumi [28] proposed a novel authentication and key agreement scheme, which offloaded the heavy cryptographic functions of resource-constrained sensors to the trusted neighboring sensors. In [29], a secure and lightweight mutual authentication and key agreement scheme was presented, in which the cryptographic functions were proved to be computationally lightweight and resist some known attacks. Although these schemes were lightweight in the IoT environment, they did not prove that they were applicable to heterogeneous IoT. In [30], Hou et al. proposed a secure and lightweight authentication and key agreement scheme based on CPK and ECC in HIoT environment. Unfortunately, this scheme used signature-to-encryption in a time-consuming way.

In this paper, we propose a novel and lightweight anonymous authentication and key agreement scheme for heterogeneous IoT, which is based on a signcryption algorithm between PKI and CLC environment. It provides more features of user anonymity, non-repudiation, key agreement fairness and lightweight. In addition, our scheme can be proved to resist replay attacks and DOS attacks. Therefore, it has wider application prospect in HIoT environment.

The rest of this paper is organized as follows. In Section II, we discuss the secure HIoT’s system model. Section III demonstrates the proposed mutual authentication and key agreement scheme for HIoT. Sections IV and V present informal security and performance analysis respectively. At last, the conclusion is described in section VI.

In this section, there is a brief description of the HIoT’s system model and security assumptions.

A typical scenario model of HIoT is illustrated in Fig. 2. It mainly consists of a gateway node (GWN), a user and a sensor node (SN).

The GWN is a trust third party that can distribute partial private key to the SN and the digital certificate to the user respectively. The SN in CLC is in charge of gathering data from environments and forwarding the data to the user in PKI via a secure channel.

The security of the proposed scheme depends on the hardness of the following problems:

1) The GWN selects the main private key s∈Z∗q randomly, and calculates the public key Ppub=sP. Let l be the security parameter of the system and ID={0,1}∗ be an identity space.

Step 1: Registration between the user in PKI environment and the GWN.

2) The GWN firstly computes the account information Acd=(w1+H0(IDp))P and the signature information σ1=w1+H0(IDp)+sδ, where w1∈Z∗q and δ=H1(IDp,PKp). Then, it returns the identity account management information {Acd,σ1,δ} to the user.

3) The user checks if the equation Acd=σ1P−Ppubδ holds or not.

Step 2: Registration between the SN in CLC environment and the GWN.

1) The SN sends its identity IDc to the GWN.

4) The SN computes PKc1=xcP and sets PKc={T,PKc1,γ} as its intact public key. Then, it checks if Acd=σ1P−Ppubδ.

3) Finally, the user does the following verification:

If mutual authentication is successful, the user and the SN could generate the same session key respectively. Therefore, they can communicate with each other securely in the future.

In system authentication phase, Acd is not transmitted in plaintext and is hidden by the account protection information R2=R1+Acd. Only the user and the SN can get Acd. Even the GWN can not get the user’s real identity. Therefore, our scheme can provide the user’s identity anonymity.

The user sends the service request message {R2,σ,tc} to the SN, but in this process others can not forge the ciphertext message σ without obtaining the user’s intact private key due to the hardness of the CDHP problem under current conditions. Thereby, σ can only be generated by the user. When the authentication is successful, the SN will provide the corresponding services for the legal user. The user can not deny sending the service request messages to the SN. Similarly, anyone else is unable to impersonate the SN due to the lack of the SN’s private key. Therefore, the SN can not deny either that it had received the user’s service request messages or that it had provided the corresponding services for the user.

The SN is unable to identify the validity of the message from the user, because it does not know if the message had been received by itself. The attackers usually utilize the drawback to initiate a replay attack on the SN. Our scheme avoids this drawback by involving a timestamp to the user’s service request message effectively. After receiving the service request message, the SN can check the freshness of the message based on the judgment of the timestamp to identify if the message could be accepted. Therefore, our scheme can resist replay attacks.

In system registration phase, the GWN sends the account information Acd to the user and the SN respectively through a secure channel. When the user initiates a service request for the SN, the SN utilizes the account protection information R2 and own private key to compute Acd. Then, it verifies if Acd is equal to the received Acd, so as to determine if it should accept the service request message from the user. Before generating a bogus service request, the attackers must calculate Acd correctly ahead. However, they can not get the correct Acd=(w1+H0(IDp))P without the random number w1. Our scheme exploits Acd to prevent attackers from abusing system resources to send a lot of invalid service request messages. Therefore, our scheme can resist denial of service attacks successfully.

For quantitative analysis of our scheme, we use Ubuntu OS as the experimental platform to simulate the total running time. Let P denote the bilinear pairing operation, M denote the point multiplication operation in G1, E denote the exponential operation in G2, and H denote the hash operation separately.

TABLE I demonstrates the performance comparison between the proposed scheme and other related schemes. Note that SC denotes symmetric cryptography. Fig. 4 shows the total computation and communication costs of each scheme.

From TABLE I, we can clearly find that the scheme [17] does not involve signcryption algorithm, so it causes higher communication costs. Although the scheme [31] has a lower communication overhead, it is inefficient with higher computation complexity. Furthermore, the scheme in [32] has only proved that it satisfies confidentiality and unforgeability. Besides, it has the key escrow issue, causing a lot of storage space to be occupied for the resource-constrained sensor node side. For all above, our scheme is more applicable for heterogeneous IoT.

In recent time, the security and privacy issues of HIoT have drawn much attention from all walks of life. In order to solve these problems for HIoT, this paper proposes an anonymous mutual authentication and key agreement scheme based on a proper signcryption algorithm. The proposed scheme not only possesses the features of anonymity, non-repudiation, key agreement fairness, but also can resist replay attacks and DOS attacks. Additionally, the scheme is highly lightweight with lower computation and communication overhead. What’s more, it is innovatively designed to shift between the PKI and CLC environment. As a consequence, our scheme has a better scalability to be more applicable for heterogeneous IoT.