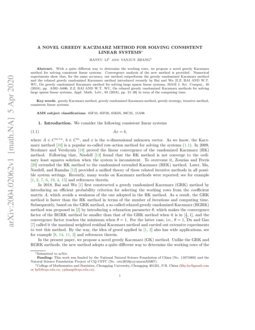 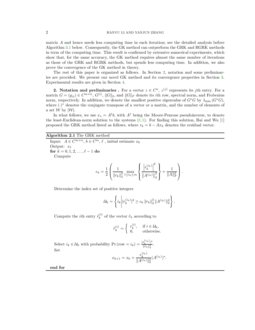 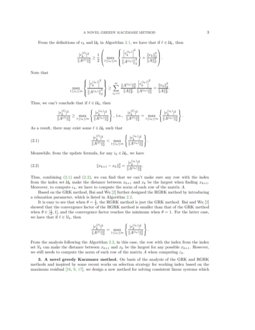 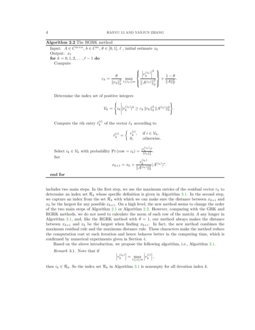 -dimensional unknown vector. As we know, the Kaczmarz method

[kaczmarz1] is a popular so-called row-action method for solving the systems (1). In 2009, Strohmer and Vershynin [Strohmer2009] proved the linear convergence of the randomized Kaczmarz (RK) method. Following that, Needell [Needell2010]

found that the RK method is not converge to the ordinary least squares solution when the system is inconsistent. To overcome it, Zouzias and Freris

A, which avoids a weakness of the one adopted in the RK method. As a result, the GRK method is faster than the RK method in terms of the number of iterations and computing time. Subsequently, based on the GRK method, a so-called relaxed greedy randomized Kaczmarz (RGRK) method was proposed in [Bai2018r] by introducing a relaxation parameter θ, which makes the convergence factor of the RGRK method be smaller than that of the GRK method when it is in [12,1], and the convergence factor reaches the minimum when θ=1. For the latter case, i.e., θ=1, Du and Gao [Gao2019] called it the maximal weighted residual Kaczmarz method and carried out extensive experiments to test this method. By the way, the idea of greed applied in [Bai2018, Bai2018r] also has wide applications, see for example [Griebel2012, Nguyen2017, Liu2019, Bai2019] and references therein.

The rest of this paper is organized as follows. In Section 2, notation and some preliminaries are provided. We present our novel GK method and its convergence properties in Section 3. Experimental results are given in Section 4.

G∗G by λmin(G∗G), where (⋅)∗ denotes the conjugate transpose of a vector or a matrix, and the number of elements of a set W by |W|.

In what follows, we use x⋆=A†b, with A† being the Moore-Penrose pseudoinverse, to denote the least-Euclidean-norm solution to the systems (1). For finding this solution, Bai and Wu [Bai2018] proposed the GRK method listed as follows, where rk=b−Axk denotes the residual vector.

From the definitions of ϵk and Uk in Algorithm 1, we have that if ℓ∈Uk, then

Thus, we can’t conclude that if ℓ∈Uk, then

As a result, there may exist some ℓ∈Uk such that

Meanwhile, from the update formula, for any ik∈Uk, we have

Thus, combining (2) and (3), we can find that we can’t make sure any row with the index from the index set Uk make the distance between xk+1 and xk be the largest when finding xk+1. Moreover, to compute ϵk, we have to compute the norm of each row of the matrix A.

Based on the GRK method, Bai and Wu [Bai2018r] further designed the RGRK method by introducing a relaxation parameter, which is listed in Algorithm 2.

From the analysis following the Algorithm 2, in this case, the row with the index from the index set Vk can make the distance between xk+1 and xk be the largest for any possible xk+1. However, we still needs to compute the norm of each row of the matrix A when computing εk.

On basis of the analysis of the GRK and RGRK methods and inspired by some recent works on selection strategy for working index based on the maximum residual [Nutini2018, Haddock2019, Rebrova2019], we design a new method for solving consistent linear systems which includes two main steps. In the first step, we use the maximum entries of the residual vector rk to determine an index set Rk whose specific definition is given in Algorithm 3. In the second step, we capture an index from the set Rk with which we can make sure the distance between xk+1 and xk be the largest for any possible xk+1. On a high level, the new method seems to change the order of the two main steps of Algorithm 1 or Algorithm 2. However, comparing with the GRK and RGRK methods, we do not need to calculate the norm of each row of the matrix A any longer in Algorithm 3, and, like the RGRK method with θ=1, our method always makes the distance between xk+1 and xk be the largest when finding xk+1. In fact, the new method combines the maximum residual rule and the maximum distance rule. These characters make the method reduce the computation cost at each iteration and hence behaves better in the computing time, which is confirmed by numerical experiments given in Section 4.

Based on the above introduction, we propose the following algorithm, i.e., Algorithm 3.

then ik∈Rk. So the index set Rk in Algorithm 3 is nonempty for all iteration index k. □

Like Algorithm 1 or Algorithm 2, we can use the values of ∣∣∣r(~ik)k∣∣∣2∥∥A(~ik)∥∥22 for ~ik∈Rk as a probability selection criterion to devise a randomized version of Algorithm 3. In this case, the convergence factor may be a little worse than that of Algorithm 3 because, for the latter, the index is selected based on the largest value of ∣∣∣r(~ik)k∣∣∣2∥∥A(~ik)∥∥22 for ~ik∈Rk, which make the distance between xk+1 and xk be the largest for any possible xk+1. □

In the following, we give the convergence theorem of the GK method.

The iteration sequence {xk}∞k=0 generated by Algorithm 3, starting from an initial guess x0∈Cn in the column space of A∗, converges linearly to the least-Euclidean-norm solution x⋆=A†b and

From the update formula in Algorithm 3, we have

which together with the fact Ax⋆=b gives

On the other hand, from Algorithm 3, we have

which together with a result from [Bai2018]:

is valid for any vector x in the column space of A∗, implies

which is just the estimate (4).

Note that, according to the update formula in Algorithm 3, it is easy to obtain

which together with (10) yields

Hence, the convergence factor of the GK method is small when the parameters α and β are small. So, the smaller size of |Rk| is, the better convergence factor of the GK method is when β is fixed. From the definitions of Uk, Vk, and Rk, we can find that the size of |Rk| may be smaller than those of |Uk| and |Vk|. This is one of the reasons that our algorithm behaves better in computing time. □

where k=1,2,…. So the convergence factor of GK method is slightly better for the above case. □

For the RGRK method, its error estimate in expectation given in [Bai2018r] is

Considering (15) and similar to derivation of (5), we can get that when α=1 and β=min1≤i≤m∥A(i)∥22, the convergence factor of GK method is also slightly better than that of the RGRK method.

We compare the three methods mainly in terms of the iteration numbers (denoted as “IT”) and the computing time in seconds (denoted as “CPU”). It should be pointed out here that the IT and CPU listed in our numerical results denote the arithmetical averages of the required iteration numbers and the elapsed CPU times with respect to 50 times repeated runs of the corresponding methods, and we always set θ=1 in the RGRK method in our experiments since the convergence factor attains its minimum in this case. To give an intuitive compare of the three methods, we also present the iteration number speed-up of GK against GRK, which is defined as

the iteration number speed-up of GK against RGRK, which is defined as

the computing time speed-up of GK against GRK, which is defined as

and the computing time speed-up of GK against RGRK, which is defined as

In addition, for the sparse matrices from [Davis2011], we define the density as follows

and use cond(A) to represent the Euclidean condition number of the matrix A.

In our specific experiments, the solution vector x⋆ is generated randomly by the MATLAB function randn and we set the right-hand side b=Ax⋆. All the test problems are started from an initial zero vector x0=0 and terminated once the relative solution error (RES), defined by