We describe a simple, computationally light, real-time system for tracking the lower face and extracting information about the shape of the open mouth from a video sequence. The system allows unencumbered control of audio synthesis modules by the action of the mouth. We report work in progress to use the mouth controller to interact with a physical model of sound production by the avian syrinx. 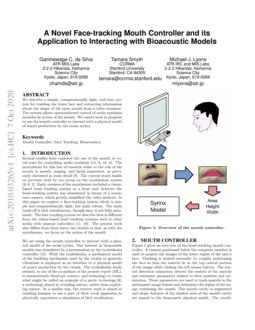 Several studies have explored the use of the mouth or vocal tract for controlling audio synthesis [Orio97, Lyons01, Vogt02, Lyons03]. The motivations for this line of research relate to the role of the mouth in speech, singing, and facial expression, as previously discussed in some detail [Lyons03]. The current study builds on previous work by our group on the mouthesizer system [Lyons01, Lyons03, Chan03]. Early versions of the mouthesizer included a vision-based head tracking system as a front end, however the head-tracking system was abandoned in favour of a miniature camera, which greatly simplified the video analysis. In this paper we explore a face-tracking system which is simple and computationally light, but quite robust. The main trade-off is that initialization, though easy, is not fully automatic. The face tracking system we describe here is different from the vision-based head tracking systems used in other works with musical controllers [Ng02, Merrill03]. The present work also differs from these latter two studies in that, as with the mouthesizer, we focus on the action of the mouth.

We are using the mouth controller to interact with a physical model of the avian syrinx. Our interest in bioacoustic models was stimulated by a presentation on the tymbalimba controller [Smyth02]. With the tymbalimba, a mechanical model of the buckling mechanism used by the cicada to generate vibrations is employed as an interface to a physical model of sound production by the cicada. The tymbalimba study seemed, to one of the co-authors of the present report (ML), to harmoniously blend art, science, and technology to create what might be called an example of a poetic technology [Heidegger], a technology aimed at revealing nature, rather than exploiting nature. In a similar way, the current work is aimed at enabling humans to use a part of their vocal apparatus to physically experience a simulation of bird vocalization.

Figure 1 gives an overview of the head-tracking mouth controller. A camera positioned below the computer monitor is used to acquire the images of the lower region of the user’s face. Tracking is iniated manually by roughly positioning the face so that the nostrils lie in the top central portion of the image while clicking the left mouse button. The nostril detection subsystem detects the centers of the nostrils and estimates parameters related to their position and orientation. These parameters are used to track nostrils in the subsequent image frames and determine the region of the image containing the mouth. The mouth cavity is segmented and shape features of the shadow area of the mouth cavity are passed to the bioacoustic physical model. The coordinates of the point lying between the nostril centers is also sent, however we are not currently using these parameters to control sound synthesis.

A robust and computationally simple approach to nostril detection and tracking is used. The method is a modified version of the algorithm proposed by Petajan [Petajan96], and uses gradients of pixel intensities as features. The nostrils are cavities, not surfaces, and under a wide range of lighting conditions they appear dark relative to the surrounding area of the face. For an upright face, a small window of the image containing the nostrils exhibits characteristic patterns of intensity variation in the horizontal and vertical directions. These patterns are prominently seen in horizontal and vertical image projections (Figure 2) and can be used to infer the approximate location of the nostril centers.

Nostril detection is initialized by positioning the nose in a specified rectangular region of the image (Figure 2(a)) and clicking the left mouse button. In practice this requires little effort but still significantly reduces the complexity of the nostril detection step.

Nostril tracking proceeds in a similar fashion to nostril detection, with the following changes but the nostril search window is rotated by angle −AN about CN before the samples are extracted. This improves the accuracy of the measured parameters. DN and AN are smoothed by using a weighted sum of the previous value and current value to temporally smooth the motion of the search window. Also, the position of CN is predicted by assuming contant velocity over three consecutive frames, according to he following equation:

The nostril locations are also used to determine a region containing the mouth (Figure 3, lower rectangle). The window is rotated before the subimage is extrated for processing. This simplifies the task of calculating the orientation dependent height and width of the mouth. Some portions of the mouth region can be outside of the image boundary, but this does not affect mouth cavity segmentation.

Colour and intensity thresholding are used to segment the shadow area inside the open mouth, as with the headworn mouthesizer [Lyons01, Lyons03, Chan03]. The mouth appears as a dark, relatively red region in the image. Pixels with red component above a certain threshold and intensity less than another threshold are selected as beloning to the shadow in the mouth cavity. Each threshold can be controlled with a slider by the user, while observing a visualization of the segmented mouth region on the screen, to acheive a continuous region.

Several shape features of the chosen blob are calculated. The total number of the pixels in the blob is proportional to the area, A

of the shadow region of the mouth cavity. The standard deviation of the vertical coordinate of pixels in the blob is proportional to the

The parameters can change when the user moves their head, even if the mouth shape does not change. Cancellation of this effect would require information about the three dimensional shape of the face as well as pose and range information. However since the system is used interactively, the user can control the pose and range of their face according to auditory feedback from the system. In practice, we envision using this system in one of three possible ways: with a desktop camera; with a camera on a stand such as a microphone stand [Hewitt03]; with a handheld camera. Presently, the area, height, width, and aspect ratio, are ouput as MIDI control changes. Other methods of interfacing with synthesis modules are being investigated.

3 Model of the Avian Syrinx

In this work, we focus on the application of the system to control of an example of a bioacoustic physical model of the avian syrinx developed by Smyth and Smith. This section summarizes the model. For further details we refer the reader to the cited works on the development of the syrinx model.

The bird’s airway consists of a trachea which divides into the left and right bronchus at its base. Within each bronchus there is a membrane forming a pressure-controlled valve just before its junction with the trachea. During voiced song, the membrane is set into motion by air flow, vibrating at a frequency determined partly by the mass and tension of the membrane and partly by the resonance of the upper bronchus and trachea to which it is connected [flet99]. The neural control of the muscles surrounding the syrinx, the pressure in the interclavicular air sac which encases the syrinx, and the bird’s respiratory mechanics all greatly contribute to how sound is modulated by the syrinx [brackenbury].

When the membrane is set into motion, variable heights are formed within the valve channel creating a constricted aperture through which air must flow. The model of the valve displacement and the resulting pressure through the constriction is developed following an acoustic model by Fletcher [flet88] and is based on the mechanical properties of the membrane and the Bernoulli equation for air flow.

The valve model has the following four variables which evolve over time during sound production (illustrated in Fig. 5): the pressure on the bronchial side of the valve (p0(t)), air volume flow through the valve channel (U(t)), displacement of the membrane (x(t)), and finally the pressure on the tracheal side of the valve (p1(t)). The four model variables are simulated by discretizing their corresponding differential equations, each one very much dependent on the other.

The methods used for digitally simulating the avian vocal tract model are described in [smythsmithDAFX02] and [smythsmithASA02]. A signal flow diagram is presented in Fig. 6.

A physical model of the bird’s vocal tract was developed using waveguide synthesis techniques for the bronchi and trachea tubes and finite difference methods for the nonlinear vibrating syringeal membranes [smythsmithDAFX02, smythsmithASA02].

The structure of the syrinx varies greatly among different bird species. With the anatomical parameters set however, the user is free to create a tremendous variety of sounds simply by changing the two primary control parameters: the pressure from the lungs and the tension in the membrane.

Though there is clearly a definite relationship between the tension in the membranes and the pitch of the produced sound and likewise between the blowing pressure and the amplitude, the mapping is made more difficult by nonlinearities intrinsic to the dynamics of the syrinx [nature98]. A slight change in one parameter can cause effects such as period doubling, mode-locking and transitions from periodic to chaotic behaviour [smythabelsmithSMAC03].

We are beginning to explore mappings of the mouth shape parameters to the syrinx model parameters, including left and right syringeal membrane tensions, and length and radius of the bronchii and trachea. In addition we plan to try a tactile interface to control the pressure from the lungs.

At present the both the face-tracking mouth controller and a pd implementation of the syrinx model are up and running. The syrinx model is stable for a range of parameters but exhibits some instabilities for others. This is to be expected given that in reality certain pressure and tension values would only be suited to certain syrinx geometries and sizes. For instance, blowing pressure that is too strong for a small syrinx may cause the membrane or valve to rupture. Results of our current experiments with various mappings will be presented at the conference poster session.

The authors thank Chi-Ho Chan for helpful discussions. The work was supported in part by the National Institute of Information and Communications Technology of Japan.