We introduce a novel embedding method for knowledge base completion task. Our approach advances state-of-the-art (SOTA) by employing a convolutional neural network (CNN) for the task which can capture global relationships and transitional characteristics. We represent each triple (head entity, relation, tail entity) as a 3-column matrix which is the input for the convolution layer. Different filters having a same shape of 1x3 are operated over the input matrix to produce different feature maps which are then concatenated into a single feature vector. This vector is used to return a score for the triple via a dot product. The returned score is used to predict whether the triple is valid or not. Experiments show that ConvKB achieves better link prediction results than previous SOTA models on two current benchmark datasets WN18RR and FB15k-237. 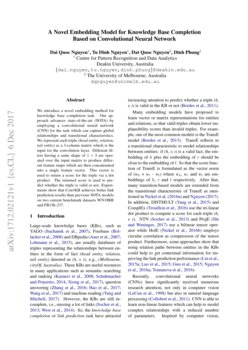 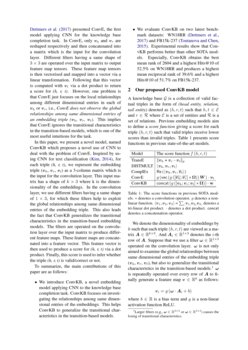 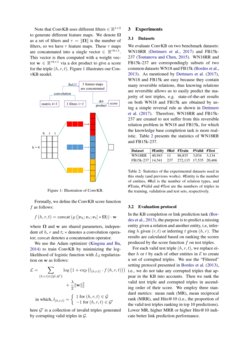 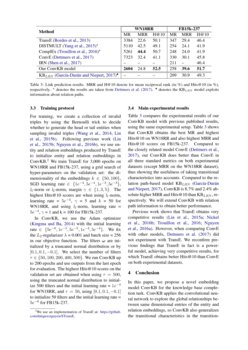 STransE: a novel embedding model of entities and relationships in knowledge bases

Knowledge Base Completion: Baselines Strike Back

Many papers have been published on the knowledge base completion task in...
Rudolf Kadlec, et al. ∙

KGBoost: A Classification-based Knowledge Base Completion Method with Negative Sampling

Many embedding models have proposed to learn vector or matrix representations for entities and relations, obtaining state-of-the-art (SOTA) link prediction results Nickel et al. (2016a). In these embedding models, valid triples obtain lower implausibility scores than invalid triples. Let us take the well-known embedding model TransE (Bordes et al., 2013) as an example. In TransE, entities and relations are represented by k-dimensional vector embeddings. TransE employs a transitional characteristic to model relationships between entities, in which it assumes that if (h, r, t) is a valid fact, the embedding of head entity h plus the embedding of relation r should be close to the embedding of tail entity t, i.e. vh + vr ≈ vt (here, vh, vr and vt are embeddings of h, r and t respectively). That is, a TransE score ∥vh+vr−vt∥pp of the valid triple (h, r, t) should be close to 0 and smaller than a score ∥vh′+vr′−vt′∥pp of an invalid triple (h’, r’, t’). The transitional characteristic in TransE also implies the global relationships among same dimensional entries of vh, vr and vt.

(Collobert et al., 2011; Kim, 2014). CNN learns non-linear features to capture complex relationships with a remarkably less number of parameters compared to fully connected neural networks. Inspired from the success in computer vision, Dettmers et al. (2018) proposed ConvE—the first model applying CNN for the KB completion task. In ConvE, only vh and vr are reshaped and then concatenated into an input matrix which is fed to the convolution layer. Different filters of the same 3×3

vt via a dot product to return a score for (h, r, t). See a formal definition of the ConvE score function in Table 1. It is worth noting that ConvE focuses on the local relationships among different dimensional entries in each of vh or vr, i.e., ConvE does not observe the global relationships among same dimensional entries of an embedding triple (vh, vr, vt), so that ConvE ignores the transitional characteristic in transition-based models, which is one of the most useful intuitions for the task.

In this paper, we present ConvKB—an embedding model which proposes a novel use of CNN for the KB completion task. In ConvKB, each entity or relation is associated with an unique k-dimensional embedding. Let vh, vr and vt denote k-dimensional embeddings of h, r and t, respectively. For each triple (h, r, t), the corresponding triple of k-dimensional embeddings (vh, vr, vt) is represented as a k×3 input matrix. This input matrix is fed to the convolution layer where different filters of the same 1×3 shape are used to extract the global relationships among same dimensional entries of the embedding triple. That is, these filters are repeatedly operated over every row of the input matrix to produce different feature maps. The feature maps are concatenated into a single feature vector which is then computed with a weight vector via a dot product to produce a score for the triple (h, r, t). This score is used to infer whether the triple (h, r, t) is valid or not.

Our contributions in this paper are as follows:

A knowledge base G is a collection of valid factual triples in the form of (head entity, relation, tail entity) denoted as (h,r,t) such that h,t∈E and r∈R where E is a set of entities and R is a set of relations. Embedding models aim to define a score function f giving an implausibility score for each triple (h,r,t) such that valid triples receive lower scores than invalid triples. Table 1 presents score functions in previous SOTA models.

We denote the dimensionality of embeddings by k such that each embedding triple (vh, vr, vt) are viewed as a matrix A=[vh,vr,vt]∈Rk×3. And Ai,:∈R1×3 denotes the i-th row of A. Suppose that we use a filter ω∈R1×3 operated on the convolution layer. ω is not only aimed to examine the global relationships between same dimensional entries of the embedding triple (vh, vr, vt), but also to generalize the transitional characteristics in the transition-based models. ω is repeatedly operated over every row of A to finally generate a feature map v=[v1,v2,...,vk]∈Rk as:

where b∈R is a bias term and g

is some activation function such as ReLU.

Our ConvKB uses different filters ∈R1×3 to generate different feature maps. Let Ω and τ denote the set of filters and the number of filters, respectively, i.e. τ=|Ω|, resulting in τ feature maps. These τ feature maps are concatenated into a single vector ∈Rτk×1 which is then computed with a weight vector w∈Rτk×1 via a dot product to give a score for the triple (h,r,t). Figure 1 illustrates the computation process in ConvKB.

Formally, we define the ConvKB score function f as follows:

If we only use one filter ω (i.e. using τ=1) with a fixed bias term b=0 and the activation function g(x)=|x| or g(x)=x2, and fix ω=[1,1,−1] and w=1 during training, ConvKB reduces to the plain TransE model (Bordes et al., 2013). So our ConvKB model can be viewed as an extension of TransE to further model global relationships.

to train ConvKB by minimizing the loss function

L (Trouillon et al., 2016) with L2 regularization on the weight vector w of the model:

In the KB completion or link prediction task (Bordes et al., 2013), the purpose is to predict a missing entity given a relation and another entity, i.e, inferring h given (r,t) or inferring t given (h,r). The results are calculated based on ranking the scores produced by the score function f on test triples.

Following Bordes et al. (2013), for each valid test triple (h,r,t), we replace either h or t by each of other entities in E to create a set of corrupted triples. We use the “Filtered” setting protocol (Bordes et al., 2013)

. We train TransE for 3,000 epochs, using a grid search of hyper-parameters: the dimensionality of embeddings

To learn our model parameters including entity and relation embeddings, filters ω and the weight vector w, we use Adam (Kingma and Ba, 2014) and select its initial learning rate ∈{5e−6,1e−5,5e−5,1e−4,5e−4}. We use ReLU as the activation function g. We fix the batch size at 256 and set the L2-regularizer λ at 0.001 in our objective function. The filters ω

are initialized by a truncated normal distribution or by

ConvKB does better than the closely related model TransE on both experimental datasets, especially on FB15k-237 where ConvKB gains significant improvements of 347−257=90 in MR (which is about 26% relative improvement) and 0.396−0.294=0.102 in MRR (which is 34+% relative improvement), and also obtains 51.7−46.5=5.2% absolute improvement in Hits@10. Previous work shows that TransE obtains very competitive results Lin et al. (2015a); Nickel et al. (2016b); Trouillon et al. (2016); Nguyen et al. (2016a). However, when comparing the CNN-based embedding model ConvE with other models, Dettmers et al. (2018) did not experiment with TransE. We reconfirm previous findings that TransE in fact is a strong baseline model, e.g., TransE obtains better MR and Hits@10 than ConvE on WN18RR.

ConvKB obtains better scores than ConvE on both datasets (except MRR on WN18RR and MR on FB15k-237), thus showing the usefulness of taking transitional characteristics into accounts. In particular, on FB15k-237, ConvKB achieves improvements of 0.394−0.316=0.078 in MRR (which is about 25% relative improvement) and 51.7−49.1=2.6% in Hits@10, while both ConvKB and ConvE produce similar MR scores. ConvKB also obtains 25% relatively higher MRR score than the relation path-based model KBLRN on FB15k-237. In addition, ConvKB gives better Hits@10 than KBLRN, however, KBLRN gives better MR than ConvKB. We plan to extend ConvKB with relation path information to obtain better link prediction performance in future work.

In this paper, we propose a novel embedding model ConvKB for the knowledge base completion task. ConvKB applies the convolutional neural network to explore the global relationships among same dimensional entries of the entity and relation embeddings, so that ConvKB generalizes the transitional characteristics in the transition-based embedding models. Experimental results show that our model ConvKB outperforms other state-of-the-art models on two benchmark datasets WN18RR and FB15k-237. Our code is available at: https://github.com/daiquocnguyen/ConvKB.

We also plan to extend ConvKB for a new application where we could formulate data in the form of triples. For example, inspired from the work by Vu et al. (2017) for search personalization, we can also apply ConvKB to model user-oriented relationships between submitted queries and documents returned by search engines, i.e. modeling triple representations (query, user, document).