In the field of fixed wing aircraft, many morphing technologies have been applied to the wing, such as adaptive airfoil, variable span aircraft, variable swept angle aircraft, etc., but few are aimed at the tail. The traditional fixed wing tail includes horizontal and vertical tail. Inspired by the bird tail, this paper will introduce a new bionic tail. The tail has a novel control mode, which has multiple control variables. Compared with the traditional fixed wing tail, it adds the area control and rotation control around the longitudinal symmetry axis, so it can control the pitch and yaw of the aircraft at the same time. When the area of the tail changes, the maneuverability and stability of the aircraft can be changed, and the aerodynamic efficiency of the aircraft can also be improved. The aircraft with morphing ability is often difficult to establish accurate mathematical model, because the model has a strong nonlinear, model-based control method is difficult to deal with the strong nonlinear aircraft. In recent years, with the rapid development of artificial intelligence technology, learning based control methods are also brilliant, in which the deep reinforcement learning algorithm can be a good solution to the control object which is difficult to establish model. In this paper, the model-free control algorithm PPO is used to control the tail, and the traditional PID is used to control the aileron and throttle. After training in simulation, the tail shows excellent attitude control ability. 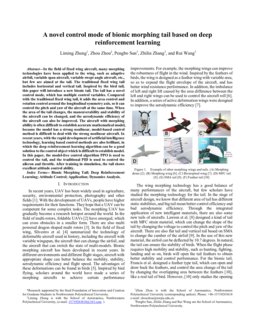 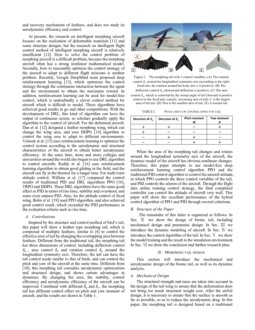