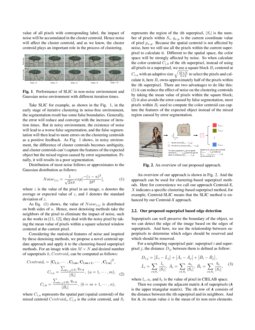 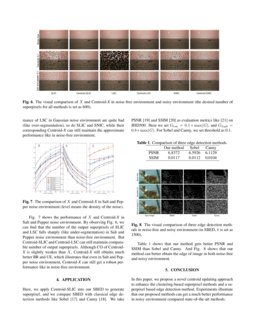 In 2003, Ren et al. [1] first proposed the concept of superpixel, which refers to a series of regions consists of pixels with adjacent positions and similar color, brightness and texture features. These regions can retain the effective information like the boundary information of objects in the image [2, 3, 4]. Different from pixel, superpixel can reduce the size of the object to be processed and the complexity of the subsequent processing to a great extent [2, 3, 4]. Due to these advantages, superpixel methods are usually used as a preprocessing step for many tasks [2, 3, 4, 5].

. Simple linear iterative clustering (SLIC) is one of the most commonly used clustering-based methods, which adopts a local K-means clustering method to cluster pixels based on the color and spatial distance

[10]. Different to the five-dimensional space used in SLIC, it takes a ten-dimensional space and gets a better boundary recall rate than SLIC. Recently, an improved SLIC called simple non-iterative clustering (SNIC) has been developed [5]. Compared to SLIC and LSC, SNIC do not need iterations, so it has higher computational and memory efficiency. However, above clustering-based methods are all sensitive to noise [2]. When the noise exists, they can not maintain the performance as they work in non-noise situation [2].

To solve the above problems of clustering-based superpixel methods, in this paper, we first analyze the features of noise. Then according to the statistical features of noise, we propose a novel centroid updating approach to enhance the clustering-based superpixel methods. Moreover, we propose a superpixel based edge detection algorithm (SBED), which can gain edge of image by detecting edges of superpixels. The contribution of this paper can be concluded as follows,

Distribution of most noise follows or approximates to the Gaussian distribution as follows:

where z is the value of the pixel in an image, u denotes the average or expected value of z, and δ

denotes the standard deviation of

As Eq. (1) shows, the value of Noise(z) is distributed on both sides of u. Hence, most denoising methods take the neighbors of the pixel to eliminate the impact of noise, such as the works in [11, 12], they deal with the noisy pixel by taking the mean value of pixels within a square selected window centered at the current pixel.

Considering the statistical features of noise and inspired by these denoising methods, we propose a novel centroid update approach and apply it to the clustering-based superpixel methods. For an image with size M×N and desired number of superpixels k, Centroidi can be computed as follows:

where Ci,a represents the spatial part (spatial centroid) of the mixed centroid Centroidi, Ci,b is the color centroid, and Si represents the region of the ith superpixel, |Si| is the number of pixels within Si, qx,y is the current coordinate value of pixel px,y. Because the spatial centroid is not affected by noise, here we still use all the pixels within the current superpixel to calculate it. Different to the spatial space, the color space will be strongly affected by noise. So when calculate the color centroid Ci,b of the ith superpixel, instead of using all pixels in a superpixel, we use a square block Bi centered at Ci,a with an adaptive size √M×Nk×2 to select the pixels and calculate it, here Bi owns approximately half of the pixels within the ith superpixel. There are two advantages to do like this: (1) it can reduce the effect of noise on the clustering centroids by taking the mean value of pixels within the square block; (2) it also avoids the error caused by false segmentation, most pixels within Bi used to compute the color centroid can capture the features of the expected object instead of the mixed region caused by error segmentation.

2.2 Our proposed superpixel based edge detection

Superpixels can well preserve the boundary of the object, so we can detect the edge of the image based on the edges of superpixels. And here, we use the relationship between superpixels to determine which edges should be reserved and which should be removed.

For a neighboring superpixel pair: superpixel i and superpixel j, the distance Dij between them is defined as follow:

where lc, ac and bc is the value of pixel in CIELAB space.

Then we compute the adjacent matrix A of superpixels (A is the upper triangular matrix). The ith row of A consists of the distance between the ith superpixel and its neighbors. And for A, its mean value ^a is the mean of its non-zero elements. If Ai,j<^a, the edge between Si and Sj should be removed, otherwise it should be reserved.

Finally, we use the gradient of superpixel to further detect the edge point. The whole procedure of SBED is presented in Algorithm 1.

In this section, we apply our Centroid-X on three common used clustering-based superpixel methods: SLIC, LSC, and SNIC. We compare the performance of the original method and the enhanced method using our approach on the Berkeley benchmark (BSD500) [13] with three kinds of environment: noise-free, Gaussian noise (zero mean with standard deviation (std) range [0.1,0.2]), and salt and pepper noise (noise density range [0.1, 0.2]). All the work is run on a personal computer with Windows 10, Intel(R) Core(TM) i7 2.2 GHz 6 cores CPU, and 8 GB RAM 111Data and codes for our proposed centroid update approach and SBED are published on https://github.com/ProfHubert/ICASSP..

Fig. 3 shows the BR, UE, and CO curves of all methods in noise-free environment. By comparing them, we can find that X (SLIC, LSC, SNIC) obtains better BR than Centroid-X, but the enhanced one obtains better CO, and the UE between them is basically the same. Fig. 4 shows their running time, except SNIC, the speed between SLIC and Centroid-SLIC and the speed between LSC and Centroid-LSC have little difference. Because SNIC takes a non-iterative clustering and its main computation focuses on the centroid update, hence Centroid-X affect the computation of SNIC more than SLIC and LSC. Generally speaking, the difference between X and Centroid-X is not significant in noise-free environment.

Fig. 5 shows the comparison of X and Centroid-X in Gaussian noise environment. We can see that Centroid-SLIC and Centroid-SNIC obtain much better BR, UE and CO than SLIC and SNIC. Although LSC obtains better BR than Centroid-LSC, but its UE and CO are significantly worse than Centroid-LSC. In Fig .6, we can see that the performance of LSC in Gaussian noise environment are quite bad (like over-segmentation), so do SLIC and SNIC, while their corresponding Centroid-X can still maintain the approximate performance like in noise-free environment.

Here, we apply Centroid-SLIC into our SBED to generate superpixel, and we compare SBED with classical edge detection methods like Sobel [17] and Canny [18]. We take PSNR [19] and SSIM [20]

In this paper, we propose a novel centroid updating approach to enhance the clustering-based superpixel methods and a superpixel based edge detection method. Experiments illustrate that our proposed methods can get a much better performance in noisy environment compared state-of-the-art methods.