Recently, a new stabilizer free weak Galerkin method (SFWG) is proposed, which is easier to implement. The idea is to raise the degree of polynomials j for computing weak gradient. It is shown that if j>=j0 for some j0, then SFWG achieves the optimal rate of convergence. However, large j will cause some numerical difficulties. To improve the efficiency of SFWG and avoid numerical locking, in this note, we provide the optimal j0 with rigorous mathematical proof. 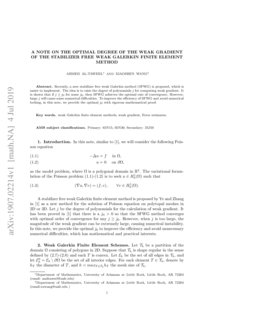 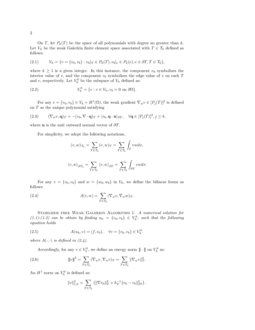 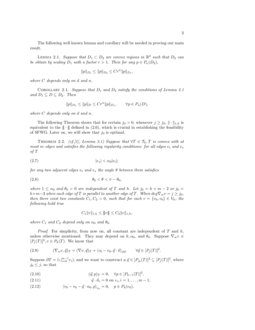 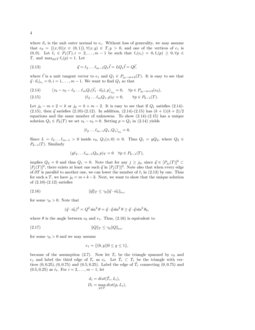 In this work, we propose and analyse a weak Galerkin method for the elec...
Ying Liang, et al. ∙

In this note, similar to [1], we will consider the following Poisson equation

as the model problem, where Ω is a polygonal domain in R2. The variational formulation of the Poisson problem (1)-(2) is to seek u∈H10(Ω) such that

A stabilizer free weak Galerkin finite element method is proposed by Ye and Zhang in [1] as a new method for the solution of Poisson equation on polytopal meshes in 2D or 3D. Let j be the degree of polynomials for the calculation of weak gradient. It has been proved in [1] that there is a j0>0 so that the SFWG method converges with optimal order of convergence for any j≥j0. However, when j is too large, the magnitude of the weak gradient can be extremely large, causing numerical instability. In this note, we provide the optimal j0 to improve the efficiency and avoid unnecessary numerical difficulties, which has mathematical and practical interests.

Let Th be a partition of the domain Ω consisting of polygons in 2D. Suppose that Th is shape regular in the sense defined by (2.7)-(2.8) and each T is convex. Let Eh be the set of all edges in Th, and let E0h=Eh∖∂Ω be the set of all interior edges. For each element T∈Th, denote by hT the diameter of T, and h=maxT∈ThhT the mesh size of Th.

On T, let Pk(T) be the space of all polynomials with degree no greater than k. Let Vh be the weak Galerkin finite element space associated with T∈Th defined as follows:

For any v={v0,vb}∈Vh+H1(Ω), the weak gradient ∇wv∈[Pj(T)]2 is defined on T as the unique polynomial satisfying

is the unit outward normal vector of

A numerical solution for (1)-(2) can be obtain by finding uh={v0,vb}∈V0h, such that the following equation holds

The following well known lemma and corollary will be needed in proving our main result. Suppose that D1⊂D2 are convex regions in Rd such that D2 can be obtain by scaling D1 with a factor r>1. Then for any p∈Pn(D2),

where C depends only on d and n.

Suppose that D1 and D2 satisfy the conditions of Lemma 2 and D1⊆D⊆D2. Then

where C depends only on d and n.

The following Theorem shows that for certain j0>0, whenever j≥j0, ∥⋅∥1,h is equivalent to the |||⋅||| defined in (9), which is crucial in establishing the feasibility of SFWG. Later on, we will show that j0 is optimal. (cf.[1], Lemma 3.1) Suppose that ∀T∈Th,T is convex with at most m edges and satisfies the following regularity conditions: for all edges et and es of T

where C1 and C2 depend only on α0 and θ0. For simplicity, from now on, all constant are independent of T and h, unless otherwise mentioned. They may depend on k,α0, and θ0. Suppose ∇wv∈[Pj(T)]2,v∈Pk(T). We know that

for some γ0>0 and we may assume

where Li is the line containing ei. Then

To show that j0=k+m−2 or j0=k+m−3 is the lowest possible degree for the weak gradient, we give the following examples.

Note that the degree of freedom of

For the completeness, we list the following from [1]. Let uh∈Vh be the weak Galerkin finite element solution of (8). Assume that the exact solution u∈Hk+1(Ω) and H2-regularity holds true. Then, there exists a constant C such that

We are devoting this section to verify our theoretical results in previous sections by two numerical examples. The domain in all examples is Ω=(0,1)×(0,1). We will implement the SFWG finite element method (8) on triangular meshes. A uniform triangulation of the domain Ω is used. By refining each triangle for N=2,4,8,16,32,64,128, we obtain a sequence of partitions. The first two levels of grids are shown in Figure 3. We apply the SF-WG finite element method with (Pk(T),Pk(e),[Pk+1(T)]2),k=1,2 finite element space to find SFWG solution uh={u0,ub} in the computation.

In this example, we solve the Poisson problem (1)-(2) posed on the unit square Ω, and the analytic solution is

The boundary conditions and the source term f(x,y) are computed accordingly. Table 1 lists errors and convergence rates in H1-norm and L2-norm.

In this example, we consider the problem −Δu=f with boundary condition and the exact solution is

The results obtained in Table 2 show the errors of SFWG scheme and the convergence rates in the |||⋅||| norm and ∥⋅∥ norm. The simulations are conducted on triangular meshes and polynomials of order k=1,2. The SFWG scheme with Pk element has optimal convergence rate of O(hk) in H1-norm and O(hk+1) in L2-norm.

Overall, the numerical experiment’s results shown in the formentioned examples match the theoretical study part in the previous sections.