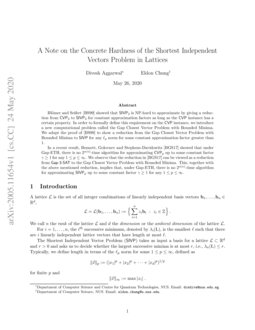 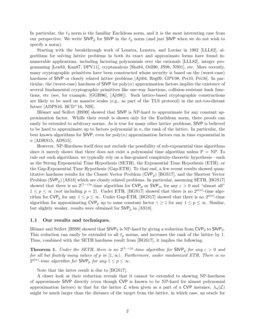 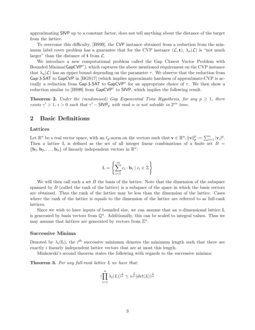 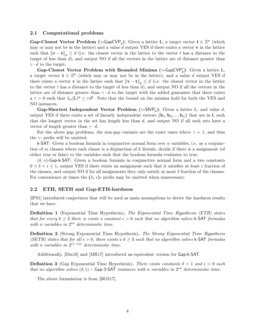 Improved Hardness of BDD and SVP Under Gap-(S)ETH

We show that a constant factor approximation of the shortest and closest...
Thomas Rothvoss, et al. ∙

NP-Hardness and Inapproximability of Sparse PCA

We give a reduction from clique to establish that sparse PCA is NP-hard...
Malik Magdon-Ismail, et al. ∙

A lattice L is the set of all integer combinations of linearly independent basis vectors b1,…,bn∈Rd,

For i=1,…,n, the ith successive minimum, denoted by λi(L), is the smallest ℓ such that there are i linearly independent lattice vectors that have length at most ℓ.

The Shortest Independent Vector Problem (SIVP) takes as input a basis for a lattice L⊂Rd and r>0 and asks us to decide whether the largest successive minima is at most r, i.e., λn(L)≤r. Typically, we define length in terms of the ℓp norm for some 1≤p≤∞, defined as

for finite p and

In particular, the ℓ2 norm is the familiar Euclidean norm, and it is the most interesting case from our perspective. We write SIVPp for SIVP in the ℓp norm (and just SIVP when we do not wish to specify a norm).

Starting with the breakthrough work of Lenstra, Lenstra, and Lovász in 1982 [LLL82], algorithms for solving lattice problems in both its exact and approximate forms have found innumerable applications, including factoring polynomials over the rationals [LLL82], integer programming [Len83, Kan87, DPV11], cryptanalysis [Sha84, Odl90, JS98, NS01], etc. More recently, many cryptographic primitives have been constructed whose security is based on the (worst-case) hardness of SIVP or closely related lattice problems [Ajt04, Reg09, GPV08, Pei10, Pei16]. In particular, the (worst-case) hardness of SIVP for poly(n) approximation factors implies the existence of several fundamental cryptographic primitives like one-way functions, collision-resistant hash functions, etc (see, for example, [GGH96], [Ajt98]). Such lattice-based cryptographic constructions are likely to be used on massive scales (e.g., as part of the TLS protocol) in the not-too-distant future [ADPS16, BCD+16, NIS].

Blömer and Seifert [BS99] showed that SIVP is NP-hard to approximate for any constant approximation factor. Whille their result is shown only for the Euclidean norm, there proofs can easily be extended to arbitrary norms. As is true for many other lattice problems, SIVP is believed to be hard to approximate up to factors polynomial in n, the rank of the lattice. In particular, the best known algorithms for SIVP, even for poly(n) approximation factors run in time exponential in n [ADRS15, ADS15].

However, NP-Hardness itself does not exclude the possibility of sub-exponential time algorithms since it merely shows that there does not exist a polynomial time algorithm unless P = NP. To rule out such algorithms, we typically rely on a fine-grained complexity-theoretic hypothesis—such as the Strong Exponential Time Hypothesis (SETH), the Exponential Time Hypothesis (ETH), or the Gap-Exponential Time Hypothesis (Gap-ETH). To that end, a few recent results showed quantitative hardness results for the Closest Vector Problem (CVPp) [BGS17], and the Shortest Vector Problem (SVPp) [AS18] which are closely related problems. In particular, assuming SETH, [BGS17] showed that there is no 2(1−ε)n-time algorithm for CVPp or SVP∞ for any ε>0 and “almost all” 1≤p≤∞ (not including p=2). Under ETH, [BGS17] showed that there is no 2o(n)-time algorithm for CVPp for any 1≤p≤∞. Under Gap-ETH, [BGS17] showed that there is no 2o(n)-time algorithm for approximating CVPp up to some constant factor γ≥1 for any 1≤p≤∞. Similar, but slightly weaker, results were obtained for SVPp in [AS18].

1.1 Our results and techniques.

Blömer and Seifert [BS99] showed that SIVP2 is NP-hard by giving a reduction from CVP2 to SIVP2. This reduction can easily be extended to all ℓp norms, and increases the rank of the lattice by 1. Thus, combined with the SETH hardness result from [BGS17], it implies the following.

Note that the latter result is due to  [BGS17].

A closer look at their reduction reveals that it cannot be extended to showing NP-hardness of approximate SIVP directly (even though CVP is known to be NP-hard for almost polynomial approximation factors) in that for the lattice L when given as a part of a CVP instance, λn(L) might be much larger than the distance of the target from the lattice, in which case, an oracle for approximating SIVP up to a constant factor, does not tell anything about the distance of the target from the lattice.

To overcome this difficulty, [BS99], the CVP instance obtained from a reduction from the minimum label cover problem has a guarantee that for the CVP instance (L,t), λn(L) is “not much larger” than the distance of t from L.

We introduce a new computational problem called the Gap Closest Vector Problem with Bounded Minima(GapCVPτ), which captures the above mentioned requirement on the CVP instance that λn(L) has an upper bound depending on the parameter τ. We observe that the reduction from Gap-3-SAT to GapCVP in [BGS17] (which implies approximate hardness of approximate-CVP is actually a reduction from Gap-3-SAT to GapCVPτ for an appropriate choice of τ. We then show a reduction similar to [BS99] from GapCVPτ to SIVP, which implies the following result.

Under the (randomised) Gap Exponential Time Hypothesis, for any p≥1, there exists γ′>1, ϵ>0 such that γ′−SIVPp with rank n is not solvable in 2ϵn time.

Let Rn be a real vector space, with an ℓp-norm on the vectors such that v∈Rn,∥∥v∥∥pp:=∑ni=1|vi|p. Then a lattice L is defined as the set of all integer linear combinations of a finite set B={b1,b2,…,bn}

of linearly independent vectors in

Denoted by λi(L), the ith successive minimum denotes the minimum length such that there are exactly i linearly independent lattice vectors that are at most this length.

Minkowski’s second theorem states the following with regards to the successive minima:

For any full-rank lattice L we have that:

Gap-Shortest Independent Vector Problem (γ-SIVPp): Given a lattice L, and value d, output YES if there exists a set of linearly independent vectors {b1,b2,...,bn} that are in L such that the longest vector in the set has length less than d, and output NO if all such sets have a vector of length greater than γ⋅d.

For the above gap problems, the non-gap variants are the exact cases where γ=1, and thus the γ- prefix will be omitted.

k-SAT: Given a boolean formula in conjunctive normal form over n variables, i.e. as a conjunction of m clauses where each clause is a disjunction of k literals, decide if there is a assignment (of either true or false) to the variables such that the boolean formula evaluates to true.

(δ,ϵ)-Gap-k-SAT: Given a boolean formula in conjunctive normal form and a two constants 0≤δ<ϵ≤1, output YES if there exists an assignment such that it satisfies at least ϵ fraction of the clauses, and output NO if for all assignments they only satisfy at most δ fraction of the clauses. For convenience at times the (δ, ϵ)- prefix may be omitted when unnecessary.

[IP01] introduced conjectures that will be used as main assumptions to derive the hardness results that we have.

The Exponential Time Hypothesis (ETH) states that for every k≥3 there is exists a constant ϵ>0 such that no algorithm solves k-SAT formulas with n variables in 2ϵn deterministic time.

The Strong Exponential Time Hypothesis (SETH) states that for all ϵ>0, there exists a k≥3 such that no algorithm solves k-SAT formulas with n variables in 2(1−ϵ)n deterministic time.

Additionally, [Din16] and [MR17] introduced an equivalent version for Gap-k-SAT.

There exists constants δ<1 and ϵ>0 such that no algorithm solves (δ,1)−Gap-3-SAT instances with n variables in 2ϵn deterministic time.

The above formulation is from [BGS17].

The main result that has led to subsequent hardness proofs in other lattice problems was derived by [BGS17] through the construction of isolating parallelepipeds that encode assignments from instances of Gap-k-SAT to choices of vectors such that each clause contributes the same distance regardless of how many literals are as long at least one literal is satisfied, however unsatisfied clauses would contribute a much greater distance.

Solving exact CVPp under all p-norms where p is not even and ≤k−1 is not possible in time 2(1−ϵ)n where ϵ>0.

The same proof works for p in general instead of 2.

There exists a reduction from (δ,ϵ)-Gap-2-SAT with n variables and m clauses to γ-GapCVPτp for any p-norm, so that the rank of the lattice in the resulting instance is the same as the number of variables in the original instance. Furthermore, γ is given as:

We will provide their construction of the γ-CVPτp instance here. Let t be a target vector defined by the following:

where ηi denotes the number of negated literals in the ith clause, the distance d be (ϵ+(1−ϵ)3p)1p, and B a set of basis (column) vectors {b1,b2,…,bk} defined by the following:

We will make the following claim about the reduction that was proposed in their paper as they will be useful to us in our reduction: In the resulting lattice, both λpn and the length of the target vector is upper bounded by 3pϵ+(1−ϵ)3p⋅dp, where dp is proportional to the number of clauses in the (δ,ϵ)-Gap-2-SAT instance. Thus we can say that the resulting instance is also an instance of γ-CVPτp, where τ=3pϵ+(1−ϵ)3p⋅dp.

Consider the construction provided in [BGS17], the basis vectors that are then provided have values of either −2,2,0, thus in the worst case, we obtain a set of linearly independent vectors with the longest vector having all 2 or −2’s. ∎

This implies it is almost always possible to reduce the number of clauses in (δ,1)-Gap-k-SAT instances so that reductions that run linear in m may also be considered linear in n, so that Gap-ETH may still apply. However, since the reduction is randomised, existence of sub-exponential time algorithms that solve the resulting instances only imply existence of randomised sub-exponential time algorithms for (δ,1)-Gap-k-SAT in the general case (i.e. when m=ω(n)).

There exists a polynomial time reduction from k-SAT to CVPp such that the rank of the resulting lattice is the same as the number of variables in the original k-SAT instance, for all p that is not even and less or equals to k−1.

Solving exact CVPp under all p-norms where p is not even is not possible in time 2(1−ϵ)n where ϵ>0.

instance. To do this, an extra value that was large enough was padded to the bottom of the target vector to ensure it would be long enough to be considered the

We now present our main contribution, that is showing hardness of approximating γ-SIVPp within a constant factor γ.

For any τ=τ(n)>0, and γ≥1 there exists an efficient reduction from γ-GapCVPτp to γ′-SIVPp for any p-norm where p∈[1,∞), with γ′p≤2pγp2p−1+γp. Moreover, the rank of the lattice in the γ′-SIVPp instance is equals to n+1 where n is the rank γ-CVPτp instance.

Given a basis for the γ-CVPτp instance as b1,b2,…,bn and the target vector t, we construct the basis for L′:

Let v be the vector closest to the target t. Let v1,…,vn be a set of linearly independent vectors in L such that

Notice that v1,…,vn,(v−t,r)T is a set of linearly independent vectors in L′. Thus, if the CVP instance is a YES instance, λ′n+1 is upper bounded by the maximum of (dp+rp)1/p and λn.

From this we obtain:

For all cases, we will pick rp to be 2pγp2p−1+γp, it will always be the case that

This reduction is clearly runs in polynomial time.. ∎

Under the randomised Gap Exponential Time Hypothesis, there exists γ′>1, ϵ>0 such that γ′-SIVPp with rank n is not solvable in 2ϵn time.

This can be achieved by considering of of the instances throughout the chain of reductions from (δ,ϵ)-Gap-3-SAT to (δ′,ϵ′)-Gap-2-SAT to γ-GapCVPτp and finally γ′-SIVPp.

In the original (δ,ϵ)-Gap-3-SAT instance with n variables and m clauses, we obtain a γ′-SIVPp with rank n+m+1

with high probability. Thus under the randomised Gap-ETH, there is no sub-exponential time algorithm for