A note on optimal design for hierarchical generalized group testing

Choosing an optimal strategy for hierarchical group testing is an important problem for practitioners who are interested in disease screening under limited resources. For example, when screening for infection diseases in large populations, it is important to use algorithms that minimize the cost of potentially expensive assays. Black et al.(2015) described this as an intractable problem unless the number of individuals to screen is small. They proposed an approximation to an optimal strategy that is difficult to implement for large population sizes. In this note, we develop an optimal design that can be obtained using a novel dynamic programming algorithm. We show that this algorithm is substantially more efficient than the approach proposed by Black et al.(2015). The resulting algorithm is simple to implement and Matlab code is presented for applied statistician. 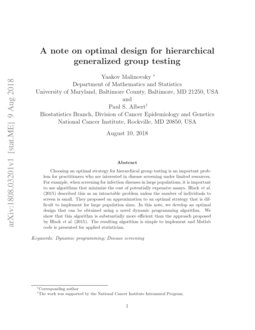 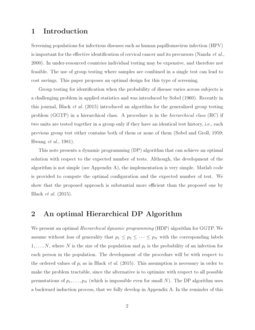 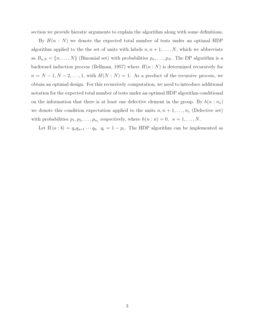 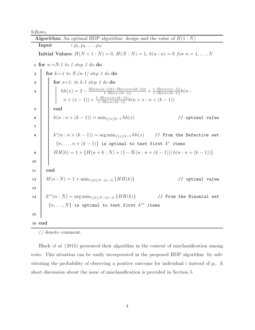 In the group testing problem we aim to identify a small number of infect...
Amin Coja-Oghlan, et al. ∙

In the group testing problem one aims to infer a small set of k infected...
Oliver Gebhard, et al. ∙

Is Group Testing Ready for Prime-time in Disease Identification?

Group design in group testing for COVID-19 : A French case-study

Screening for an Infectious Disease as a Problem in Stochastic Control

There has been much recent interest in screening populations for an infe...
Jakub Marecek, et al. ∙

Screening populations for infectious diseases such as human papillomavirus infection (HPV) is important for the effective identification of cervical cancer and its precursors (Nanda et al., 2000). In under-resourced countries individual testing may be expensive, and therefore not feasible. The use of group testing where samples are combined in a single test can lead to cost savings. This paper proposes an optimal design for this type of screening.

Sobel (1960). Recently in this journal, Black et al. (2015) introduced an algorithm for the generalized group testing problem (GGTP) in a hierarchical class. A procedure is in the hierarchical class (HC) if two units are tested together in a group only if they have an identical test history, i.e., each previous group test either contains both of them or none of them (Sobel and Groll, 1959; Hwang et al., 1981).

This note presents a dynamic programming (DP) algorithm that can achieve an optimal solution with respect to the expected number of tests. Although, the development of the algorithm is not simple (see Appendix A), the implementation is very simple. Matlab code is provided to compute the optimal configuration and the expected number of test. We show that the proposed approach is substantial more efficient than the proposed one by Black et al. (2015).

We present an optimal Hierarchical dynamic programming (HDP) algorithm for GGTP. We assume without loss of generality that p1≤p2≤⋯≤pN with the corresponding labels 1,…,N, where N is the size of the population and pi is the probability of an infection for each person in the population. The development of the procedure will be with respect to the ordered values of pi as in Black et al. (2015). This assumption is necessary in order to make the problem tractable, since the alternative is to optimize with respect to all possible permutations of p1,…,pN (which is impossible even for small N). The DP algorithm uses a backward induction process, that we fully develop in Appendix A. In the reminder of this section we provide hieratic arguments to explain the algorithm along with some definitions.

Let Π(a:b)=qaqa+1⋯qb,qi=1−pi. The HDP algorithm can be implemented as follows.

Black et al. (2015) presented their algorithm in the context of misclassification among tests. This situation can be easily incorporated in the proposed HDP algorithm 1 by substituting the probability of observing a positive outcome for individual i instead of pi. A short discussion about the issue of misclassification is provided in Section 5.

We present numerical examples to demonstrate how an optimal HDP algorithm can be used in practice. Since the minimal group size is equal to 1 or 2, and the case of 1 is clear, we demonstrate first the implementation of the algorithm for N=2.

To demonstrate the implementation of the algorithm in more realistic situation, we consider N=11

from a Beta distribution with parameters

α=1,β>0 such that 1−pp=β, i.e., expectation equal to p, and set p(i) to E(p(i)). Table 1 presents a comparisons between the CRC and HDP algorithms for N=20, where the CRC design was determined based on the algorithm proposed by Black et al. (2015). The results show that the performance of HDP is much better than CRC with an efficiency gain of approximately 15%.

This article presents a simple algorithm for the optimal group testing design under a hierarchical class. The goal of this work is to develop group testing screening algorithms that are optimal and can be used in the situation where N is large, such as in HPV screening. In this situation, the CRC algorithm is not feasible due to its computational complexity. The HDP algorithm, however, is computational feasible even in very large populations. For N=1,000 and p=0.05 an optimal design based on the HDP algorithm results in an expected number of 288 tests.

As described in Section 2, the algorithm can easily be extended to account for test misclassification. However, group testing for screening under misclassification may need to consider a more complex objective function than the expected number of tests (Graff and Roeloffs, 1972; Malinovsky et al., 2016). Intuitively, depending on the emphasis placed on misclassification versus test-efficiency (error in diagnosing vs expected number of tests), the practitioner needs to minimize a function of these two factors. In this case, the optimal design for HGT is an open problem.

Appendix A Development of an optimal HDP algorithm for GGTP

We show here the development of an optimal HDP for GGTP. As we already discussed in Section 2, we impose an order restriction p1≤p2≤⋯≤pN. In the homogeneous case, i.e., p1=p2=…=pN=p an optimal hierarchical DP algorithm was obtained by Sobel and Groll (1959).

Evaluation of H(n:N) Recall that we are dealing with the binomial set Bn:N. We begin with the case n=N. In this case H(N:N)=1. For subsequent evaluation, when n≤N−1, we have to find the size of k of the subset Bn:n+k−1 from Bn:N to test. If the test outcome of Bn:n+k−1 is negative, then we test the remaining units n+k,…,N that form a binomial set Bn+k:N. Otherwise, if the test outcome of Bn:n+k−1 is positive, then we test defective set of size k, which we abbreviate as Dn:n+k−1, and binomial set Bn+k:N. Recall that, the left branch of the tree represents a negative test result, and the right branch represents a positive test result. We summarize these situations in the following binary testing tree.

Denote by Tk(n:N) the expected total number of tests. Then,

Then H(n:N) is calculated in a recursive manner for n=N−1,…,1. This calculation (A) required the conditional expectation h(), which is developed as follow.

Evaluation of h(n:n+(l−1)) Recall that we are dealing with the defective set Dn:n+(l−1). If l=1, then h(n:n+(l−1))=h(n:n)=0. If l≥2, we have to find a proper subset Dn:n+x−1 of size x from Dn:n+(l−1) to test. If the binary test outcome of Dn:n+x−1 is negative, then we conclude that the remaining units n+x,…,n+(l−1) form a defective set Dn+x:n+(l−1), which does not need to be tested as a whole set. If the test outcome of Dn:n+x−1 is positive, then conditional posterior distribution of units n+x,…,n+(l−1) is the same as it was before any testing and they form a binomial set Bn+x:n+(l−1) (similar arguments as in Sobel and Groll (1959)). Therefore, we divide the defective set Dn:n+(l−1) into two subsets {n,n+1,…,n+(x−1)} and {n+x,…,n+(l−1)} and test them separately from left to right. We have three possible states of these subsets, i.e., −+,+−,++, where, for example, ++ represent the situation where both subsets are positive. Denote by Tab the expected total number of tests corresponding to the situation ab,ab∈{−+,+−,++}. The following diagram represents all these possible outcomes with corresponding conditional (on the event that there is at least one defective element) probabilities.

Denote by T(n,l,x) the expected total number of tests in this case. Then,

Combining (2) and (3), we obtain an optimal ordered HDP algorithm: