We prove a new Bernstein-type inequality for the log-likelihood function of Bernoulli variables. In contrast to classical Bernstein's inequality and Hoeffding's inequality when applied to the log-likelihood, the new bound is independent of the parameters of the Bernoulli variables and therefore does not blow up as the parameters approach 0 or 1. The new inequality strengthens certain theoretical results on likelihood-based methods for community detection in networks and can be applied to other likelihood-based methods for binary data. 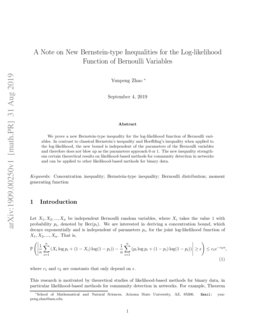 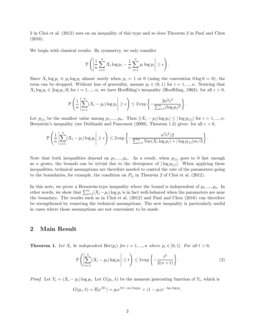 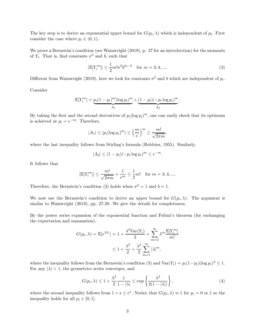 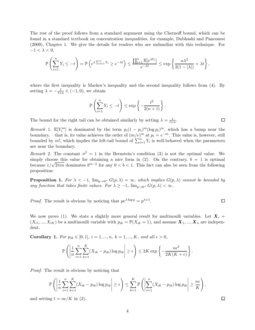 Empirical Analysis of Sampling Based Estimators for Evaluating RBMs

The Restricted Boltzmann Machines (RBM) can be used either as classifier...
Vidyadhar Upadhya, et al. ∙

be independent Bernoulli random variables, where

takes the value 1 with probability

pi, denoted by Ber(pi). We are interested in deriving a concentration bound, which decays exponentially and is independent of parameters pi, for the joint log-likelihood function of X1,X2,...,Xn. That is,

where c1 and c2 are constants that only depend on ϵ.

We begin with classical results. By symmetry, we only consider

Note that both inequalities depend on p1,...,pn. As a result, when p(1) goes to 0 fast enough as n grows, the bounds can be trivial due to the divergence of |logp(1)|. When applying these inequalities, technical assumptions are therefore needed to control the rate of the parameters going to the boundaries, for example, the condition on Pij in Theorem 2 of Choi et al. (2012).

In this note, we prove a Bernstein-type inequality where the bound is independent of p1,...,pn. In other words, we show that ∑ni=1(Xi−pi)logpi is in fact well-behaved when the parameters are near the boundary. The results such as in Choi et al. (2012) and Paul and Chen (2016) can therefore be strengthened by removing the technical assumptions. The new inequality is particularly useful in cases where those assumptions are not convenient to be made.

Let Yi=(Xi−pi)logpi. Let G(pi,λ) be the moment generating function of Yi, which is

The key step is to derive an exponential upper bound for G(pi,λ) which is independent of pi. First consider the case where pi∈(0,1).

We prove a Bernstein’s condition (see Wainwright (2019), p. 27 for an introduction) for the moments of Yi. That is, find constants σ2 and b, such that

Different from Wainwright (2019), here we look for constants σ2 and b which are independent of pi.

By taking the first and the second derivatives of pi(logpi)m, one can easily check that its optimum is achieved at pi=e−m. Therefore,

where the last inequality follows from Stirling’s formula (Robbins, 1955). Similarly,

We now use the Bernstein’s condition to derive an upper bound for G(pi,λ). The argument is similar to Wainwright (2019), pp. 27-28. We give the details for completeness.

By the power series expansion of the exponential function and Fubini’s theorem (for exchanging the expectation and summation),

where the inequality follows from the Bernstein’s condition (3) and Var(Yi)=pi(1−pi)(logpi)2≤1. For any |λ|<1, the geometrics series converges, and

The rest of the proof follows from a standard argument using the Chernoff bound, which can be found in a standard textbook on concentration inequalities, for example, Dubhashi and Panconesi (2009), Chapter 1. We give the details for readers who are unfamiliar with this technique. For −1<λ<0,

where the first inequality is Markov’s inequality and the second inequality follows from (4). By setting λ=−tt+n∈(−1,0), we obtain

The bound for the right tail can be obtained similarly by setting λ=tt+n. ∎

E[Ymi] is dominated by the term pi(1−pi)m(logpi)m, which has a bump near the boundary, – that is, its value achieves the order of (m/e)m at pi=e−m. This value is, however, still bounded by m!, which implies the left-tail bound of ∑ni=1Yi is well-behaved when the parameters are near the boundary.

The constant σ2=1 in the Bernstein’s condition (3) is not the optimal value. We simply choose this value for obtaining a nice form in (2). On the contrary, b=1 is optimal because 1/√2πm dominates bm−2 for any 0<b<1. This fact can also be seen from the following proposition:

The result is obvious by noticing that peλlogp=pλ+1. ∎

The result is obvious by noticing that

We now extend our result to a setup where the observations are grouped into different classes. In fact, this is the setup that can be directly applied to the community detection literature, for example, Theorem 2 in Choi et al. (2012) and Theorem 2 in Paul and Chen (2016). We will also apply the result in a working paper by the author and collaborators on the theory of hub models, a special latent class model for binary data proposed by Zhao and Weko (2019).

Note that here the model assumption on X(i)j is identical to the setup in Section 2, where each Bernoulli variable has its own parameter. The function we consider in the inequality is, however, defined differently. Moreover, this theorem reduces to Theorem 1 when ni≡1 for i=1,...,I.

This research was supported by the National Science Foundation grant DMS-1840203.