When there is interference, a subject's outcome depends on the treatment of others and treatment effects may take on several different forms. This situation arises often, particularly in vaccine evaluation. In settings where interference is likely, two-stage cluster randomized trials have been suggested as a means of estimating some of the causal contrast of interest. Working in the finite population setting to investigate rare and unplanned subgroup analyses using some of the estimators that have been suggested in the literature, include Horvitz-Thompson, Hajek, and what might be called the natural extension of the marginal estimators suggested in Hudgens and Halloran 2008. I define the estimands of interest conditional on individual, group and both individual and group baseline variables, giving unbiased Horvitz-Thompson style estimates for each. I also provide variance estimators for several estimators. I show that the Horvitz-Thompson (HT) type estimators are always unbiased provided at least one subject within the group or population, whatever the level of interest for the estimator, is in the subgroup of interest. This is not true of the "natural" or the Hajek style estimators, which will often be undefined for rare subgroups. 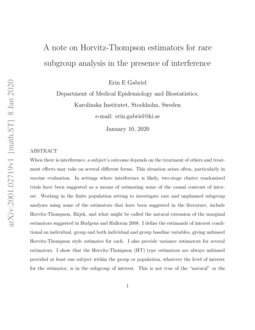 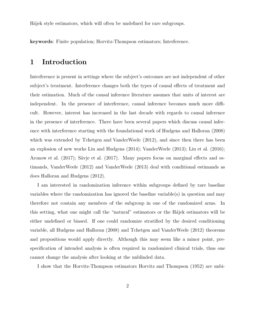 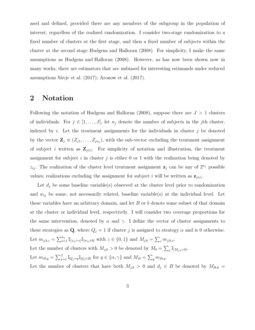 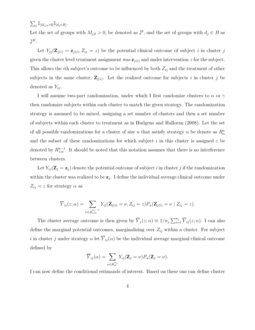 I consider the estimation of the average treatment effect (ATE), in a po...
Clément de Chaisemartin, et al. ∙

On the construction of unbiased estimators for the group testing problem

Debiased estimation has long been an area of research in the group testi...
Gregory Haber, et al. ∙

G-Formula for Observational Studies with Partial Interference, with Application to Bed Net Use on Malaria

I am interested in randomization inference within subgroups defined by rare baseline variables where the randomization has ignored the baseline variable(s) in question and may therefore not contain any members of the subgroup in one of the randomized arms. In this setting, what one might call the “natural” estimators or the Hájek estimators will be either undefined or biased. If one could randomize stratified by the desired conditioning variable, all Hudgens and Halloran (2008) and Tchetgen and VanderWeele (2012) theorems and propositions would apply directly. Although this may seem like a minor point, pre-specification of intended analysis is often required in randomized clinical trials, thus one cannot change the analysis after looking at the unblinded data.

I show that the Horvitz-Thompson estimators Horvitz and Thompson (1952) are unbiased and defined, provided there are any members of the subgroup in the population of interest, regardless of the realized randomization. I consider two-stage randomization to a fixed number of clusters at the first stage, and then a fixed number of subjects within the cluster at the second stage Hudgens and Halloran (2008). For simplicity, I make the same assumptions as Hudgens and Halloran (2008). However, as has now been shown now in many works, there are estimators that are unbiased for interesting estimands under reduced assumptions Sävje et al. (2017); Aronow et al. (2017).

Following the notation of Hudgens and Halloran (2008), suppose there are J>1 clusters of individuals. For j∈[1,…,J], let nj denote the number of subjects in the jth cluster, indexed by i. Let the treatment assignments for the individuals in cluster j

be denoted by the vector

Let dj be some baseline variable(s) observed at the cluster level prior to randomization and wij be some, not necessarily related, baseline variable(s) at the individual level. Let these variables have an arbitrary domain, and let B or b denote some subset of that domain at the cluster or individual level, respectively. I will consider two coverage proportions for the same intervention, denoted by α and γ. I define the vector of cluster assignments to these strategies as Q, where Qj=1 if cluster j is assigned to strategy α and is 0 otherwise.

Let Yij(Zj(i)=zj(i),Zij=z) be the potential clinical outcome of subject i in cluster j given the cluster level treatment assignment was zj(i) and under intervention z for the subject. This allows the ith subject’s outcome to be influenced by both Zij and the treatment of other subjects in the same cluster, Zj(i). Let the realized outcome for subjects i in cluster j be denoted as Yij.

I will assume two-part randomization, under which I first randomize clusters to α or γ then randomize subjects within each cluster to match the given strategy. The randomization strategy is assumed to be mixed, assigning a set number of clusters and then a set number of subjects within each cluster to treatment as in Hudgens and Halloran (2008). Let the set of all possible randomizations for a cluster of size n that satisfy strategy α be denote as Rnα and the subset of these randomizations for which subject i in this cluster is assigned z be denoted by Rn−1z;α. It should be noted that this notation assumes that there is no interference between clusters.

Let Yij(Zj=zj) denote the potential outcome of subject i in cluster j if the randomization within the cluster was realized to be zj. I define the individual average clinical outcome under Zij=z for strategy α as

The cluster average outcome is then given by ¯¯¯¯Yj(z;α)≡1/nj∑nji=1¯¯¯¯Yij(z;α). I can also define the marginal potential outcomes, marginalizing over Zij within a cluster. For subject i in cluster j under strategy α let ¯¯¯¯Yij(α) be the individual average marginal clinical outcome defined by

I can now define the conditional estimands of interest. Based on these one can define cluster and population level summaries of these potential outcomes as in Hudgens and Halloran (2008), as well as contrasts of interest for defining causal effects.

I first need to make assumptions to link the observable data to the desired counterfactuals and estimators.

Assumption (a) “consistency” simply means that if Zij=z and Qj=1 then Yij=Yij(z;α), (VanderWeele, 2009). Assumption (b) is implicitly made in the notation and is explained in detail in Section 2

. Under Assumption (c), all clusters have the same probability of being assigned a given strategy;

Prα≡P(Zj∈α) is the probability that a cluster will receive coverage α. Under the mixed strategy this is equal to K/J, as a fixed number of clusters, K will be randomized to α. As well, within a cluster, each individual has the same probability of being assigned to treatment given the randomized coverage which is denoted as Pjα≡Prα(Zij=1), which under a mixed strategy is equal to kj/nj, as fixed number of subjects, kj will be randomized to zij=1. Assumption (d), Stratified interference, is an assumption outlined in both Hudgens and Halloran (2008) and Tchetgen and VanderWeele (2012). It states that only a subject’s treatment assignment and the total proportion of people assigned to zij=1 within their cluster impacts their outcome. Therefore, all possible counterfactuals Yij(zj(i);zij=z) will have the same value for all zj(i)∈Rnj−1z;α.

I will consider finite population inference following Hudgens and Halloran (2008). Throughout, I mean the expected value E to be with respect to the randomization distribution had each subject and cluster been randomized in each possible pattern, for the fixed and observed, due to consistency, potential outcome.

Within groups of clusters assigned to α, let the cross-conditional outcome estimators be defined by:

At the population level, then estimators and then given by:

The the population level estimators are given by

with the contrast estimator following in the same way as above.

The the population level estimators are given by

Again, the contrast estimator following in the same way as above. All of the γ estimators are similarly defined.

with ˆVar(ˆ¯¯¯¯Y(z;γ∣B,b)) defined similarly. Proofs of all theorems and results are given in the supplementary materials. The proofs of theorems 1 and 2 consider conditioning under each type, group and individual level subgroups, separately as well as together.

Consider a setting in which there are four groups of four subjects each, in which two of four groups will received 50% coverage (α=0.5, exactly 2 of 4 individuals per group receive treatment), and the other two of four groups will receive 25% coverage (γ=0.25, exactly 1 of 4 individuals per group receive treatment). Example data are given in Table 2. There are 6 total ways to randomize the clusters to 50% or 25% in a one-to-one ratio. Let the realized randomization at the group level be, q={0,1,0,1} and that I wish to do a subgroup analysis based on the individual level covariate b. For example, this group may represent the sex of the subjects, which may not normally be rare, but could be in some settings. Under this randomization, there are six possible randomizations for group 4, z4 with 50% coverage, {0,1,1,0}, {0,0,1,1}, {0,1,0,1}, {1,1,0,0}, {1,0,0,1}, {1,0,1,0}. By the definition of the true group average value given above, ¯¯¯¯Y4(0;α∣b)=3, as subject 41 has a value under placebo of 3. This also makes clear that the estimand definitions in this setting are sensible, as you would want to know the average value within the subgroup had all subjects within the group been assigned to placebo, but still under 50% coverage.

where the superscript N is for natural.

Similarly, I consider a possible subgroup conditional version of the Hájek estimator Hájek (1971),

Finally, the estimator given above is:

In group 4, the “natural” and Hájek estimators will either be undefined, denoted as “NA” in the table, or have a different but defined value than the HT estimator if the one subject with wij∈b is assigned to treatment, as is displayed in Table 3. If I instead set the “natural” and Hájek estimators to zero when they were undefined, this would result in a bias towards 0. As defined in theorem 1, ˆVar(ˆ¯¯¯¯Y4(0;α∣b)∣Qj=1) will be equal to, 18, 0, 0, 18, 0, 18, giving an average of 9, which is the true variance of ˆ¯¯¯¯Y4(0;α∣b) over the possible randomizations, as can be seen in Table 3.

If instead one wanted to estimate ¯¯¯¯Y3(0;γ∣b), the individual variable conditional group average outcome for the untreated under 25% coverage, all estimators would be defined and unbiased. Note that, the estimators are the same as given above for group 4 but with Pjα replaced with Pjγ. Let us consider the variance of the HT estimator. As defined in theorem 1, ˆVar(ˆ¯¯¯¯Y3(0;γ∣b)∣Qj=0) will take on the values, 0, 0.44, 0.44, 0.44, over the randomizations, for an average of 0.33, which can be seen to be the true variance of ˆ¯¯¯¯Y3(0;γ∣b) over the 4 randomizations in Table 4. This is a lower variance than either of the other two estimators, which both have a true variance over the randomizations of 0.5.

I do not further speculate on how the other estimators would be extended to the cross-conditioning setting. However, in this setting the HT style estimator ˆ¯¯¯¯Y(1;α∣B,b), for example, under the realized randomization q={0,1,0,1}, would be 0 and the variance estimate would be 0, as group 1, the only group with dj∈B, is assigned to γ coverage.

In this article I define a set of conditional estimators for rare subgroup analysis following the style of the HT marginal estimator. I show that these estimators are unbiased provided there is at least one subject in the group, or population, of interest within the subgroup of interest. I provide variance estimates for average groups level and population