Recently, the Dodgson's determinant condensation algorithm was revisited in many papers [College Math. Journal 42(1)(2011): 43--54, College Math. Journal 38(2)(2007): 85--95, Math Horizons 14(2)(2006): 12--15,etc.]. This method is attractive, but there also exist some shortcomings. In this paper, a symbolic algorithm and the corresponding problems are discussed to overcome these shortcomings. Numerical experiments show that this symbolic modified algorithm has highly sensitivity on initial configuration of the matrix in condensation process. 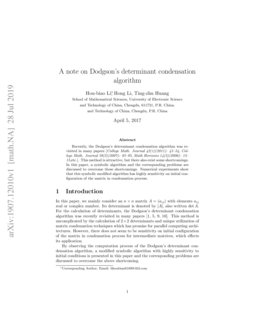 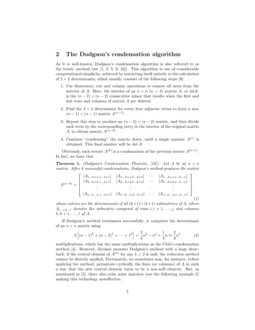 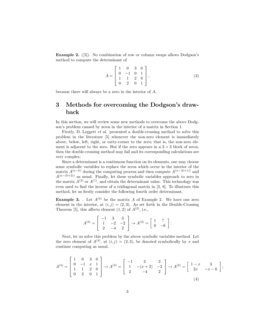 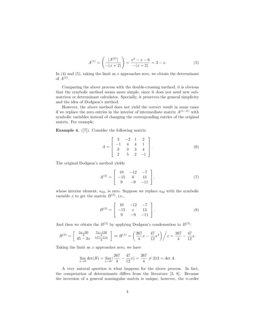 How do scientific papers with different levels of journals spread online? Exploring the temporal dynamics in the diffusion processes

Impact Factor volatility to a single paper: A comprehensive analysis

We study how a single paper affects the Impact Factor (IF) by analyzing ...
Manolis Antonoyiannakis, et al. ∙

Impact Factor volatility to a single paper: A comprehensive analysis of 11639 journals

We study how a single paper affects the Impact Factor (IF) by analyzing ...
Manolis Antonoyiannakis, et al. ∙

This is an introduction of the volume of the journal Commentationes Math...
Jiří Adamek, et al. ∙

How a Single Paper Affects the Impact Factor: Implications for Scholarly Publishing

Because the Impact Factor (IF) is an average quantity and most journals ...
Manolis Antonoyiannakis, et al. ∙

In this paper, we mainly consider an n×n matrix A=(aij) with elements aij real or complex number. Its determinant is denoted by |A|, also written detA. For the calculation of determinants, the Dodgson’s determinant condensation algorithm was recently revisited in many papers [1, 5, 9, 10]. This method is uncomplicated by the calculation of 2×2 determinants and unique utilization of matrix condensation techniques which has promise for parallel computing architectures. However, there does not seem to be sensitivity on initial configuration of the matrix in condensation process for intermediate matrices, which effects its application.

By observing the computation process of the Dodgson’s determinant condensation algorithm, a modified symbolic algorithm with highly sensitivity to initial conditions is presented in this paper and the corresponding problems are discussed to overcome the above shortcoming.

As it is well-known, Dodgson’s condensation algorithm is also referred to as the Lewis’ method (see [1, 2, 5, 9, 10]). This algorithm is one of considerable computational simplicity, achieved by restricting itself entirely to the calculation of 2×2 determinants, which usually consists of the following steps [9]:

Obviously, each iterate A(k) is a condensation of the previous iterate A(k+1). In fact, we have that

If Dodgson’s method terminates successfully, it computes the determinant of an n×n matrix using

multiplications, which has the same multiplications as the Chiò’s condensation method [4]. However, division presents Dodgson’s method with a huge drawback, if the central element of A(k) for any k>2 is null, the reduction method cannot be directly applied. Fortunately, we sometimes may, for instance, before applying the method, permutate cyclically the lines (or columns) of A in such a way that the new central element turns to be a non-null element. But, as mentioned in [5], there also exist some matrices (see the following example 2) making this technology noneffective.

([5]). No combination of row or column swaps allows Dodgson’s method to compute the determinant of

because there will always be a zero in the interior of A.

3 Methods for overcoming the Dodgson’s drawback

In this section, we will review some new methods to overcome the above Dodgson’s problem caused by zeros in the interior of a matrix in Section 1.

Firstly, D. Leggett et al. presented a double-crossing method to solve this problem in the literature [5] whenever the non-zero element is immediately above, below, left, right, or catty-corner to the zero; that is, the non-zero element is adjacent to the zero. But if the zero appears in a 3×3 block of zeros, then the double-crossing method may fail and its corresponding calculations are very complex.

Since a determinant is a continuous function on its elements, one may choose some symbolic variables to replace the zeros which occur in the interior of the matrix A(n−k) during the computing process and then compute A(n−(k+1)) and A(n−(k+2)) as usual. Finally, let these symbolic variables approach to zero in the matrix A(2) or A(1), and obtain the determinant value. This technology was even used to find the inverse of a tridiagonal matrix in [3, 8]. To illustrate this method, let us firstly consider the following fourth order determinant.

Next, let us solve this problem by the above symbolic variables method. Let the zero element of A(4), at (i,j)=(2,3), be denoted symbolically by x and continue computing as usual.

Comparing the above process with the double-crossing method, it is obvious that the symbolic method seems more simple, since it does not need new sub-matrices or determinant calculates. Specially, it preserves the general simplicity and the idea of Dodgson’s method.

However, the above method does not yield the correct result in some cases if we replace the zero entries in the interior of intermediate matrix A(n−k) with symbolic variables instead of changing the corresponding entries of the original matrix. For example,

whose interior element, a22, is zero. Suppose we replace a22 with the symbolic variable x to get the matrix B(3), i.e.,

And then we obtain the B(2) by applying Dodgson’s condensation to B(3):

Taking the limit as x approaches zero, we have

A very natural question is what happens for the above process. In fact, the computation of determinants differs from the literature [3, 8]. Because the inversion of a general nonsingular matrix is unique, however, the n-order determinants with the same value are ubiquitous. For example, the following matrices have the same intermediate matrix (7) in the computing process of the Dodgson’s method.

However, their determinants are not the same:

which show that there doesn’t seem to be sensitivity on initial configuration of the matrix in the Dodgson’s determinant condensation calculations, see Figure 1.

To solve the above problem, there exist several tactics.

(1) Firstly, we may add a symbolic variable x to an entry of the 2×2 submatrix of original matrices Ai (i=1,…6) whose determinant leads to the zero entry of A(3) (see (7)). Continuing with Dodgson’s method, we will have the correct results, as shown below. For example, for A1 and A4, we have respectively that

Taking the limit as x approaches zero, we have

That is to say, the symbolic modified Dodgson s algorithm is sensitivity on “initial value” in the condensation calculation process, see Figure 2.

Therefore, the sensitivity of the algorithm to “initial value” is very important in algorithm design. Next, let us look at the following specific example.

where the a changes from 2 to −3, the b changes from 0 to 10. The real and imaginary parts of the corresponding determinant by the symbolic modified Dodgson s algorithm are shown in Figure 3.

However, there exist also some matrices which we may replace the zero entries in the interior of intermediate matrix A(n−k) with symbolic variables instead of changing the determinant of original matrix by Dodgson’s method. For example,

The special computing process may be not described in detail here. But which of determinants can be calculated like this is still an open problem.

To better understand this method, let us reexamine Example 4:

([6]). Computing the determinant of the following matrix

Taking the limit as x approaches 3, we have

(3) For multiple zeros case, the implementation of the algorithm using Computer Algebra Systems (CAS) such as MAPLE, MACSYMA, MATHEMATICA, and MATLAB is also very straightforward and effective. The following two examples illustrate this case.

We use four symbolic parameters x, y, z and w to avoid handling zeros, that is, we define a new determinant

Taking the limit as x,y,z and w approach zero, we have

which shows that the value of the determinant (10) is 16.

Finally, when the zero appears in a 3×3 block of zeros, we know that the double-crossing method may fail. However, in this case, the symbolic algorithm still succeeds, but it needs more parameters. For example, the following determinant will require nine parameters to calculate its value by Dodgson’s method.

Finally, let us summarize the above symbolic modified algorithm as follows:

All in all, this symbol algorithm can work in all cases and preserve the idea of Dodgson’s method, which are also suited for implementation using Computer Algebra Systems (CAS) such as MATLAB, MACSYMA, MAPLE and MATHEMATICA.

From the above discussion, one can see that unique utilization of matrix condensation techniques yield an elegant process that has promise for parallel computing architectures. In this paper, we mainly summarize some progress on the research of Dodgson’s method, and some examples are given to clarify these corresponding problems. Numerical experiments show that the symbolic algorithm may be used to overcome the drawback of Dodgson’s method by the aid of computer algebra systems (CAS).