A note on 2× 2 block-diagonal preconditioning 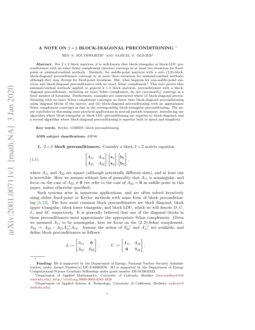 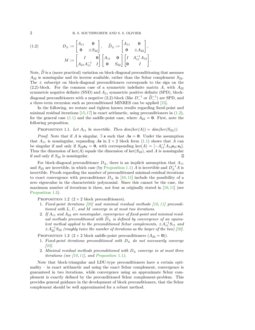 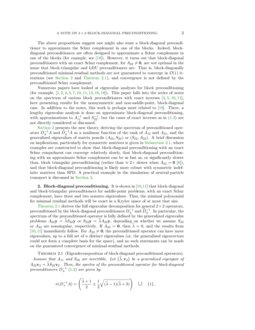 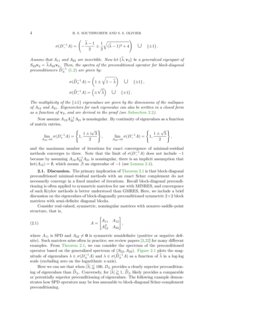 On fixed-point, Krylov, and 2× 2 block preconditioners for nonsymmetric problems

where A11 and A22 are square (although potentially different sizes), and at least one is invertible. Here we assume without loss of generality that A11 is nonsingular, and focus on the case of A22≠0 (we refer to the case of A22=0 as saddle-point in this paper, unless otherwise specified).

In the following, we restate and tighten known results regarding fixed-point and minimal residual iterations [15, 17] in exact arithmetic, using preconditioners in (1), for the general case (1) and the saddle-point case, where A22=0. First, note the following proposition.

include the possibility of a zero eigenvalue in the characteristic polynomial. Since this cannot be the case, the maximum number of iterations is three, not four as originally stated in

Numerous papers have looked at eigenvalue analyses for block preconditioning (for example, [4, 7, 2, 5, 11, 10, 1, 18, 12, 16]). This paper falls into the series of notes on the spectrum of various block preconditioners with exact inverses [11, 10, 4, 5], here presenting results for the nonsymmetric and non-saddle-point, block-diagonal case. In addition to the notes, this work is perhaps most related to [18]. There, a lengthy eigenvalue analysis is done on approximate block-diagonal preconditioning, with approximations to A−111 and S−122, but the cases of exact inverses as in (1) are not directly considered or discussed.

It is shown in [11, 10] that block-diagonal and block-triangular preconditioners for saddle-point problems, with an exact Schur complement, have three and two nonzero eigenvalues. Thus, the minimal polynomial for minimal residual methods will be exact in a Krylov space of at most that size.

distinct eigenvalues (or, the generalized eigenvectors could not form a complete basis for the space), and no such statements can be made on the guaranteed convergence of minimal-residual methods.

Assume that A11 and S22 are invertible. Let {˜λ,v2} be a generalized eigenpair of A22v2=˜λS22v2. Then, the spectra of the preconditioned operator for block-diagonal preconditioners D−1± (1) are given by:

Assume that A11 and A22 are invertible. Now let {ˆλ,v2} be a generalized eigenpair of S22v2=ˆλA22v2. Then, the spectra of the preconditioned operator for block-diagonal preconditioners ˆD−1± (1) are given by:

The multiplicity of the {±1} eigenvalues are given by the dimensions of the nullspace of A12 and A21. Eigenvectors for each eigenvalue can also be written in a closed form as a function of v2, and are derived in the proof (see Section 2.2). □

Now assume A12A−122A21 is nonsingular. By continuity of eigenvalues as a function of matrix entries,

and the maximum number of iterations for exact convergence of minimal-residual methods converges to three. Note that the limit of σ(D−1−A) does not include −1 because by assuming A12A−122A21 is nonsingular, there is an implicit assumption that ket(A12)=∅, which means ∄ an eigenvalue of −1 (see Lemma 2).

where A11 is SPD and A22≠0 is symmetric semidefinite (positive or negative definite). Such matrices arise often in practice; see review papers [3, 22] for many different examples. From Theorem 1, we can consider the spectrum of the preconditioned operator based on the generalized spectrum of (S22,A22). Figure 1 plots the magnitude of eigenvalues λ∈σ(D−1±A) and λ∈σ(ˆD−1±A) as a function of ˜λ in a log-log scale (excluding zero on the logarithmic x-axis).

relative residual tolerance, using a one vector for the right-hand side, and various

{co,c1,c2}. Results are shown for block preconditioners D±, ˆD±, L, and ˆL, a lower-triangular preconditioner using A22 instead of S22.

From Table 1, note that block-diagonal preconditioning with an exact Schur complement can make for a relatively poor preconditioner (see row 1/1/1). Moreover, for a problem with some sense of block-diagonal dominance (in this case, scaling the off-diagonal blocks by 1/20 compared with diagonal blocks; see row 20/1/1), the exact Schur complement provides almost no improvement over a standard block-diagonal preconditioner, ˆD±. Last, it is worth pointing out that for all cases, convergence of GMRES is faster applied to N (A22≤0) than M (A22≥0), in some cases up to 4× faster, which is generally consistent with Figure 1 and the corresponding discussion.111Note that N and M are still fundamentally different and there may be other factors that explain the difference in convergence. However, for all tests with a given set of random matrices and fixed co/c1/c2, the condition number, minimum magnitude eigenvalue, and maximum magnitude eigenvalue of M and N are within 1%.

for error scaling ε∗∈[0,1],ε×≥0. Here, E is a random error matrix with entries uniformly distributed between [−η,η], where η is the average magnitude of entries in A. Note that for ε∗=ε×=0 we have S∗22=S×22=S22, while S∗22 and S×22 generally become decreasingly accurate approximations to S22 as ε increases. Also, ε∗=1 yields S∗22=A22. Then, consider block preconditioners D∗,L∗,D×, and L×, which take the form of D+ and L in (1), replacing S22↦S∗22 or S22↦S×22. Figure 2 shows the ratio of block-diagonal to block-lower-triangular preconditioned GMRES iterations to 10−16 relative residual tolerance, for S∗22 and S×22, as a function of the corresponding ε error scaling. Results for S×22 are also shown with A22=0.

Note that for ε≪1 and A22≠0, L∗ and L× are significantly more effective as preconditioners than D∗ and D×, in both cases requiring ≈10× less GMRES iterations (with L∗ and L× only requiring 2−4 iterations). At ε∗=1, S∗22=A22 and, consistent with theory in [20], D∗ takes almost exactly twice as many iterations as L∗ (interestingly, the same ratio holds for D×/L×, although this appears to be coincidence). Finally, for ε∗>1, L∗ takes almost the same number of iterations as D∗. Despite both being relatively poor preconditioners, this again demonstrates that block-diagonal preconditioning can yield convergence just as fast as block-triangular preconditioning in some cases. Last, for A22=0, we observe the expected result that a block-diagonal preconditioner will require twice as many iterations as block lower-triangular using the same Schur complement approximation, when A22=0 [8].

The above discussion highlights some of the intricacies of Schur-complement preconditioning, and some of the practical insights we can learn from this analysis. An interesting open question is whether the Schur complement is optimal in any sense for block-diagonal preconditioners, or if there is a different “optimal” operator for the (2,2)-block. Of course, optimal in what sense is perhaps the larger question, because as demonstrated in Figure 1 and Table 1 (and generally known [9]), the eigenvalues of the preconditioned operator can all be very nicely bounded, but GMRES can observe arbitrarily slow convergence.

The proof is presented as a sequence of lemmas for each preconditioner.

which can be expanded as the set of equations

Eigenvectors of the former set in (8) are given by [−11−λA−111A12y;y] for each generalized eigenpair {y,ˆλ} of (7) and eigenvalue λ(ˆλ). Note that each generalized eigenpair of (A22,S22) corresponds to two eigenpairs of D−1+A, because λ(ˆλ)=0 is a quadratic equation in λ. The latter eigenvalue λ=1 in (8) has multiplicity given by the sum of dimensions of ker(A12) and ker(A21, with eigenvectors as defined previously in the proof. ■

The proof proceed analogous to Lemma 1. The block-preconditioned eigenvalue problem can be expressed as the set of equations

Eigenvectors of the former set in (10) are given by [−11−λA−111A12y;y] for each generalized eigenpair {y,ˆλ} of (7) and eigenvalue λ(ˆλ). Note that each generalized eigenpair of (A22,S22) corresponds to two eigenpairs of D−1+A, because λ(ˆλ)=0 is a quadratic equation in λ. The latter eigenvalues λ=−1 and λ=1 in (10) have multiplicity given by dimensions of ker(A12) and ker(A21), respectively, with eigenvectors as defined previously in the proof. ■

with inclusion of the latter set of eigenvalues depending on the rank of A and A12/A21, respectively.

with eigenvalues and eigenvectors determined by the saddle-point matrix on the right. If A12 or A21 are not full rank, then for each yk∈ ker(A12) or each xk∈ ker(A21), there exist eigenpairs {[0;yk],−1} or {[xk;0],1}, respectively. For x∉ ker(A21) and y∉ ker(A12), analogous to Lemma 1 we can formulate an eigenvalue problem for the saddle-point matrix, with eigenvalue ˆλ and block eigenvector [x;y]. Solving for x=1ˆλ−2A−111A12y and plugging into the equation for y yields an equivalent reduced eigenvalue problem,

Eigenvectors corresponding to eigenvalues √˜λ are given by [−11−λA−111A12y;y] for each generalized eigenpair {y,ˆλ} of (7) and eigenvalue λ(ˆλ). Note that each generalized eigenpair of (S22,A22) corresponds to two eigenpairs of ˆD−1−A, because λ(ˆλ)=0 is a quadratic equation in λ. The latter eigenvalue λ=1 in (8) has multiplicity given by the sum of dimensions of ker(A12) and ker(A21, with eigenvectors as defined previously in the proof. ■

The steady-state, mono-energetic, discrete-ordinates, linear Boltzmann equation with isotropic scattering and source is given by

Here, the direction of particle motion, Ω, is discretized into N angles corresponding to a quadrature rule for the unit sphere, {Ωd,wd}Nd=1, for quadrature weights wd>0. A standard approach to solve (15) is to (independently) invert the left-hand side for each ψd, update ∑Nd′=1wd′ψd′(x), and repeat until convergence. Unfortunately, for many applications of interest, this process can converge arbitrarily slowly.

), and introducing the Eddington tensor as a closure:

The algorithm is then to replace the scattering sum ∑Nd′=1wd′ψd′(x) in (15) with the solution of the VEF equations, φ(x), invert (15) for each angle, update the Eddington tensor, and solve the VEF equations.

There are a number of advantages to VEF over other methods of solving (15) [14, 13], but the system in (18) remains difficult to solve. However, because the diagonal blocks of (18) are mass matrices and relatively easy to invert, direct application or preconditioning of the Schur complement, S22:=Ma+BM−1tG, is feasible, which corresponds to a drift-diffusion-like equation. The remaining challenge is that Mt is an H1(D) mass matrix and, although the action of M−1t can be computed rapidly using Krylov methods, a closed form to construct S22:=Ma+BM−1tG is typically not available. A common solution is to approximate Mt using quadrature lumping, resulting in a diagonal approximation, ˜Mt. Thus, consider the four preconditioners,

Consider a 1d discretization of (16), where J is discretized with quadratic H1(D) and φ with linear L2(D), with σt(x)=Q(x)=1 and absorption σa∈{0,0.9} to demonstrate the effect of the A22 block (A22=0 when σa=0). In the limit of σt≫1, E→13I, wherein scaling the second row of (18) by −1/3 then results in a symmetric operator. Although this is unlikely to occur on the whole domain in practice, we perform tests on this case as well to demonstrate that results do not depend on nonsymmetry in (18). Table 2 shows the number of GMRES iterations to converge to 10−10 relative residual tolerance using block preconditioners in (19).

The unlumped block-diagonal and triangular preconditioners converge in two or four iterations when the A22 block is zero, largely consistent with theory in [11, 10]. However, when Ma=A22≠0, block-diagonal preconditioning requires 12 iterations. Although this is better than the several hundred seen in Table 1, it is still 3−6<span class="mjx-char MJXc-TeX-main-R" style="padding-to