A note about claw function with a small range 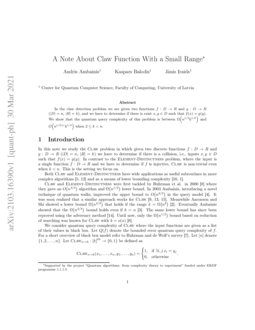 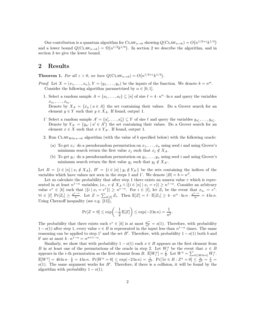 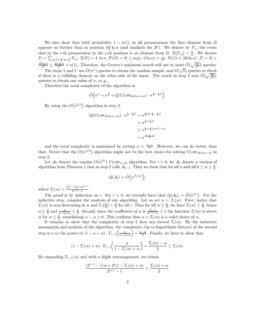 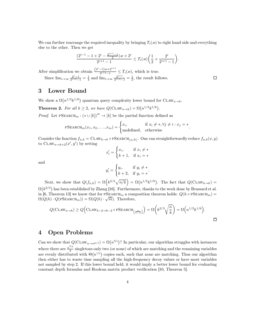 In this note we study the \textscClaw problem in which given two discrete functions f:D→R and g:D→R (|D|=n, |R|=k) we have to determine if there is a collision, i.e., inputs x,y∈D such that f(x)=g(y). In contrast to the \textscElement-Distinctness problem, where the input is a single function f:D→R and we have to determine if f is injective, \textscClaw is non-trivial even when k<n. This is the setting we focus on.

Both \textscClaw and \textscElement-Distinctness have wide applications as useful subroutines in more complex algorithms [5, 12] and as a means of lower bounding complexity [10, 1].

\textscClaw and \textscElement-Distinctness were first tackled by Buhrman et al. in 2000 [8] where they gave an algorithm and lower bound. In 2003 Ambainis, introducing a novel technique of quantum walks, improved the upper bound to in the query model [4]. It was soon realized that a similar approach works for \textscClaw [9, 13, 15]. Meanwhile Aaronson and Shi showed a lower bound that holds if the range [2]. Eventually Ambainis showed that the bound holds even if k=n [3]. The same lower bound has since been reproved using the adversary method [14]. Until now, only the bound based on reduction of searching was known for \textscClaw with [8].

Our contribution is a quantum algorithm for \textscClawn→k showing and a lower bound . In section 2 we describe the algorithm, and in section 3 we give the lower bound.

Let , be the inputs of the function. We denote k=nϰ.

Consider the following algorithm parametrized by .

Let , be the sets containing the indices of the variables which have values not seen in the steps 1 and 1’. We denote .

Similarly, we show that with probability each x∈B appears as the first element from B in at least one of the permutations of the oracle in step 2. Let Wxi be the event that x∈B appears in the i-th permutation as the first element from B. . Let . . . . The same argument works for B′. Therefore, if there is a collision, it will be found by the algorithm with probability .

We also show that with probability , in all permutations the first element from B appears no further than in position 4nblnn (and similarly for B′). We denote by Pi,j the event that in the i-th permutation in the j-th position is an element from B. . We denote . . . . Therefore, the Grover’s minimum search will use at most queries.

Therefore the total complexity of the algorithm is

By using the algorithm in step 2,

and the total complexity is minimized by setting α=4+ϰ7. However, we can do better than that. Notice that the algorithm might not be the best choice for solving \textscClaw4blnn→k in step 2.

Let A0 denote the regular \textscClawn→k algorithm. For i>0, let Ai denote a version of algorithm from Theorem 1 that in step 2 calls Ai−1. Then we show that for all n and all 0≤ϰ≤23,

It remains to show that the complexity of step 2 does not exceed . By the inductive assumption and analysis of the algorithm, the complexity (up to logarithmic factors) of the second step is n to the power of . Finally, we have to show that

By expanding and with a slight rearrangement, we obtain

We can further rearrange the required inequality by bringing to right hand side and everything else to the other. Then we get

After simplification we obtain , which is true.

We show a quantum query complexity lower bound for \textscClawn→k.

Let be the partial function defined as

Consider the function . One can straightforwardly reduce fn,k(x,y) to \textscClawn→k+2(x′,y′) by setting

Next, we show that . The fact that has been established by Zhang [16]. Furthermore, thanks to the work done by Brassard et al. in [6, Theorem 13] we know that for \textscpSearchm a composition theorem holds: . Therefore,

Can we show that ? In particular, our algorithm struggles with instances where there are n\nicefrac232 singletons only two (or none) of which are matching and the remaining variables are evenly distributed with copies each, such that none are matching. Thus our algorithm then either has to waste time sampling all the high-frequency decoy values or have most variables not sampled by step 2. If this lower bound held, it would imply a better lower bound for evaluating constant depth formulas and Boolean matrix product verification [10, Theorem 5].