A Notation for Markov Decision Processes

This paper specifies a notation for Markov decision processes. 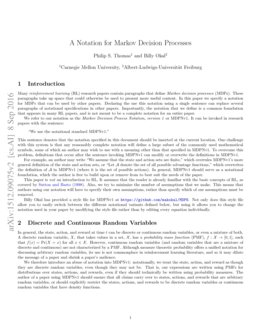 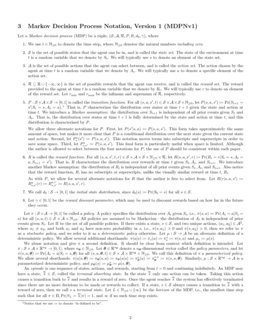 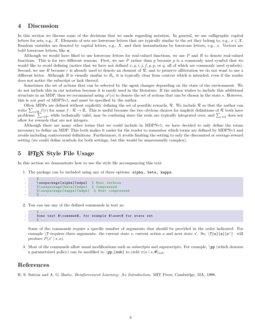 Many reinforcement learning (RL) research papers contain paragraphs that define Markov decision processes (MDPs). These paragraphs take up space that could otherwise be used to present more useful content. In this paper we specify a notation for MDPs that can be used by other papers. Declaring the use this notation using a single sentence can replace several paragraphs of notational specifications in other papers. Importantly, the notation that we define is a common foundation that appears in many RL papers, and is not meant to be a complete notation for an entire paper.

We refer to our notation as the Markov Decision Process Notation, version 1 or MDPNv1. It can be invoked in research papers with the sentence:

“We use the notational standard MDPNv1.”

This sentence denotes that the notation specified in this document should be inserted at the current location. One challenge with this system is that any reasonably complete notation will define a large subset of the commonly used mathematical symbols, some of which an author may wish to use with a meaning other than that specified in MDPNv1. To overcome this problem, definitions that occur after the sentence invoking MDPNv1 can modify or overwrite the definitions in MDPNv1.

For example, an author may write “We assume that the state and action sets are finite,” which overrules MDPNv1’s more general definition of the state and action sets, or “Let A denote the set of all possible advantage functions,” which overwrites the definition of A in MDPNv1 (where it is the set of possible actions). In general, MDPNv1 should serve as a notational foundation, which the author is free to build upon or remove from to best suit the needs of the paper.

This paper is not an introduction to RL. It assumes that the reader is already familiar with the basic concepts of RL, as covered by Sutton and Barto (1998). Also, we try to minimize the number of assumptions that we make. This means that authors using our notation will have to specify their own assumptions, rather than specify which of our assumptions must be removed.

Billy Okal has provided a style file for MDPNv1 at https://github.com/makokal/MDPN. Not only does this style file allow you to easily switch between the different notational variants defined below, but using it allows you to change the notation used in your paper by modifying the style file rather than by editing every equation individually.

In general, the state, action, and reward at time t

. However, continuous random variables (and random variables that are a mixture of discrete and continuous) are not characterized by a PMF. Although measure theoretic probability offers a unified notation for discussing arbitrary random variables, its use is not commonplace in reinforcement learning literature, and so it may dilute the message of a paper and shrink a paper’s audience.

Let π:S×A→[0,1] be called a policy. A policy specifies the distribution over At given St, i.e., π(s,a)\coloneqqPr(At=a|St=s) for all (s,a,t)∈S×A×N≥0. All policies are assumed to be Markovian—the distribution of At is independent of prior events given St. Let Π be the set of all possible policies. If there exists a state, s∈S, and two unique actions, (a1,a2)∈A2, where a1≠a2, and both a1 and a2 have non-zero probability in s, i.e., π(s,a1)>0 and π(s,a2)>0, then we refer to π as a stochastic policy, and we refer to it as a deterministic policy otherwise. Let μ:S→A be an alternate definition of a deterministic policy. We allow several additional shorthands: π(a|s)\coloneqqπs(a)\coloneqqπas\coloneqqπ(s,a) and μs\coloneqqμ(s).

We abuse notation and give π a second definition. It should be clear from context which definition is intended. Let π:S×A×Rnθ→[0,1], where nθ∈N≥0. Let θ∈Rnθ denote a nθ

An episode is one sequence of states, actions, and rewards, starting from t=0 and continuing indefinitely. An MDP may have a state, ∞s∈S, called the terminal absorbing state. In the state ∞s only one action can be taken. Taking this action causes a transition back to ∞s and results in a reward of zero. Once the agent reaches ∞s the system has effectively terminated since there are no more decisions to be made or rewards to collect. If a state, s∈S always causes a transition to ∞s with a reward of zero, then we call s a terminal state. Let L∈N≥0∪{∞} be the horizon of the MDP, i.e., the smallest time step such that for all π∈Π,Pr(SL=∞s|π)=1, and ∞ if no such time step exists.

Although we would have liked to use lowercase letters for real-valued functions, we use P and R to denote real-valued functions. This is for two different reasons. First, we use P rather than p because p is a commonly used symbol that we would like to avoid defining (notice that we have not defined x,y,i,j,f,g,p, or q, all of which are commonly used symbols). Second, we use R because r is already used to denote an element of R, and to preserve alliteration we do not want to use a different letter. Although R is visually similar to Rt, it is typically clear from context which is intended, even if the reader does not notice the subscript or lack thereof.

Sometimes the set of actions that can be selected by the agent changes depending on the state of the environment. We do not include this in our notation because it is rarely used in the literature. If the author wishes to include this additional structure in an MDP, then we recommend using A(s) to denote the set of actions that can be chosen in the state s. However, this is not part of MDPNv1, and must be specified by the author.

Often MDPs are defined without explicitly defining the set of possible rewards, R. We include R so that the author can write ∑r∈Rf(r) for some f:R→R. This is useful because the two obvious choices for implicit definitions of R both have problems: ∑r∈R, while technically valid, may be confusing since the reals are typically integrated over, and ∑r∈Z does not allow for rewards that are not integers.

Although there are many other terms that we could include in MDPNv1, we have decided to only define the terms necessary to define an MDP. This both makes it easier for the reader to remember which terms are defined by MDPNv1 and avoids including controversial definitions. Furthermore, it avoids limiting the setting to only the discounted or average-reward setting (we could define symbols for both settings, but this would be unnecessarily complex).

In this section we demonstrate how to use the style file accompanying this text.