A Normal Test for Independence via Generalized Mutual Information

Testing hypothesis of independence between two random elements on a joint alphabet is a fundamental exercise in statistics. Pearson's chi-squared test is an effective test for such a situation when the contingency table is relatively small. General statistical tools are lacking when the contingency data tables are large or sparse. A test based on generalized mutual information is derived and proposed in this article. The new test has two desired theoretical properties. First, the test statistic is asymptotically normal under the hypothesis of independence; consequently it does not require the knowledge of the row and column sizes of the contingency table. Second, the test is consistent and therefore it would detect any form of dependence structure in the general alternative space given a sufficiently large sample. In addition, simulation studies show that the proposed test converges faster than Pearson's chi-squared test when the contingency table is large or sparse. 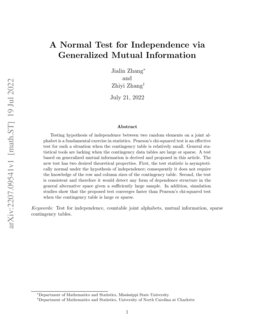 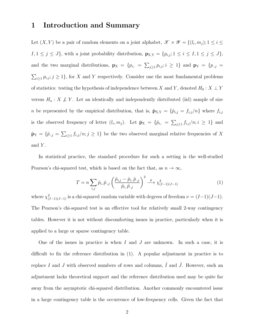 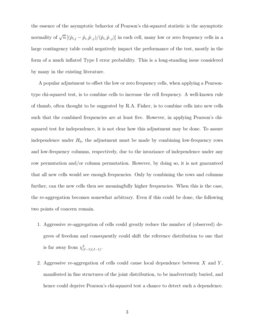 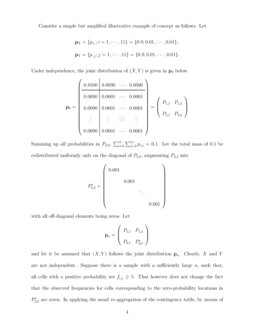 USP: an independence test that improves on Pearson's chi-squared and the G-test

We present the U-Statistic Permutation (USP) test of independence in the...
Thomas B. Berrett, et al. ∙

Biclustering is a method for detecting homogeneous submatrices in a give...
Chihiro Watanabe, et al. ∙

An Independence Test Based on Recurrence Rates. An empirical study and applications to real data

A nonparametric test of independence based on L_1-error

, with a joint probability distribution,

In statistical practice, the standard procedure for such a setting is the well-studied Pearson’s chi-squared test, which is based on the fact that, as n→∞,

is a chi-squared random variable with degrees of freedom

ν=(I−1)(J−1). The Pearson’s chi-squared test is an effective tool for relatively small 2-way contingency tables. However it is not without discomforting issues in practice, particularly when it is applied to a large or sparse contingency table.

One of the issues in practice is when I and J are unknown. In such a case, it is difficult to fix the reference distribution in (1). A popular adjustment in practice is to replace I and J with observed numbers of rows and columns, ^I and ^J

. However, such an adjustment lacks theoretical support and the reference distribution used may be quite far away from the asymptotic chi-squared distribution. Another commonly encountered issue in a large contingency table is the occurrence of low-frequency cells. Given the fact that the essence of the asymptotic behavior of Pearson’s chi-squared statistic is the asymptotic normality of

in each cell, many low or zero frequency cells in a large contingency table could negatively impact the performance of the test, mostly in the form of a much inflated Type I error probability. This is a long-standing issue considered by many in the existing literature.

A popular adjustment to offset the low or zero frequency cells, when applying a Pearson-type chi-squared test, is to combine cells to increase the cell frequency. A well-known rule of thumb, often thought to be suggested by R.A. Fisher, is to combine cells into new cells such that the combined frequencies are at least five. However, in applying Pearson’s chi-squared test for independence, it is not clear how this adjustment may be done. To assure independence under H0, the adjustment must be made by combining low-frequency rows and low-frequency columns, respectively, due to the invariance of independence under any row permutation and/or column permutation. However, by doing so, it is not guaranteed that all new cells would see enough frequencies. Only by combining the rows and columns further, can the new cells then see meaningfully higher frequencies. When this is the case, the re-aggregation becomes somewhat arbitrary. Even if this could be done, the following two points of concern remain.

Consider a simple but amplified illustrative example of concept as follows. Let

Under independence, the joint distribution of (X,Y) is given in p0 below.

with all off-diagonal elements being zeros. Let

and let it be assumed that (X,Y) follows the joint distribution pa. Clearly, X and Y are not independent. Suppose there is a sample with a sufficiently large n, such that, all cells with a positive probability see fi,j≥5. That however does not change the fact that the observed frequencies for cells corresponding to the zero-probability locations in P∗2,2 are zeros. In applying the usual re-aggregation of the contingency table, by means of combining rows and columns, one would not be able to end up with all cell frequencies greater than or equal to five, unless all rows of i=2,⋯,11 are lumped together and all columns of j=2,⋯,11 are lumped together. However by doing this, the underlying joint distribution becomes

under which X and Y are independent. In this example, it is evident that the aggregated data would imply ^I=^J=2, far away from the I=J=11. It is also evident that the data aggregation would completely erase the fine dependence structure in P∗2,2 and would leave no chance for the dependence to be detected.

To alleviate the above-mentioned difficulties, a new test of independence in a contingency table is proposed in this article. The proposed test has at least two desirable properties. First, the asymptotic distribution of the test statistic is normal under the independence assumption, and consequently neither the test statistic nor its asymptotic distribution requires the knowledge of I and J. Second, the test is consistent and therefore it would detect any form of dependence structure in the general alternative space given a sufficiently large sample. In addition, empirical evidence shows that the proposed test converges faster than Pearson’s chi-squared test when the contingency table is large or sparse.

There are five sections in this article. The main results leading to the proposed test are discussed in Section 2. In Section 3, several simulation studies are presented. A few concluding remarks are given in Section 4. The article ends with Appendix where a few proofs are found.

2 Toward a Normal Test for Independence

Applying the power escort transformation to the joint distribution p\scalebox0.7X,Y, the resulting distribution is

Let X∗ and Y∗ be a pair of random elements on the same joint alphabet X×Y according to the joint distribution p∗\scalebox0.7X,Y of (2). The following lemma is due to Zhang (2020).

On the other hand, let it be observed that under H0,

Let it also be noted that

Adding and subtracting the left-hand sides of (5) and (6) to and from (3), another restatement of H0 is obtained below.

Writing the terms within the curly brackets in (2) as TA and TB, (2) becomes

The following proposition is the keystone of the test to be proposed.

A proof of Proposition 1 is given in Appendix.

Under the conditions of Proposition 1,

is the variance given in (

At least three tests for H0:X⊥Y are feasible according to Proposition 2.

th percentile of the standard normal distribution. The test based on

ZAB is the proposed test, and it is a consistent test as described in Proposition 3 below.

Suppose neither of the two underlying marginal distributions, p\scalebox0.7X and p\scalebox0.7Y, is uniform. Then

A proof of Proposition 3 is given in Appendix.

The performance of the proposed test is assessed by simulations. Numerous simulation studies are carried out for cases with various forms of underlying distributions. In each case, the proposed test is compared against Pearson’s chi-squared test, with degrees of freedom (I−1)(J−1) and (^I−1)(^J−1) respectively, with six levels of sample size, n=30,100,500,1000,1500, and 2000. The results summarized in Table 1 are representative of the general trends observed and therefore are presented below.

Under H0, a joint distribution is constructed as follows.

The joint distribution of (10) is reconstructed, first by summing all entries in the lower-right (I−1)(J−1) sub-matrix and then redistributing the sum on the diagonal of the sub-matrix uniformly, resulting in

The results of the simulation studies are reported in Table 1, each based on one hundred thousand replicates of iid sample of indicated size n, and λ=2.

Referring to Table 1, the distribution with 1−p=0.5 on the top corresponds to the strongest contrast between H0 and Ha among all five cases in the table. For n=30 and n=100, none of the three test statistics converges satisfactorily under H0 at α=0.01. For n≥500, both the proposed test and the Pearson’s chi-squared test with observed degrees of freedom converge satisfactorily under H0, and provide very good power at Ha. However, the Pearson’s chi-squared test with theoretical degrees of freedom does not converge under H0.

The distribution with 1−p=0.7 provides an even less strong contrast between H0 and Ha. For n≥500, only the proposed test converges satisfactorily under H0, and provide meaningful power at Ha. However, both of the Pearson’s chi-squared tests have inflated Type I error probability.

The distribution with 1−p=0.8 provides a weak contrast between H0 and Ha. For n≥500, the proposed test converges satisfactorily under H0, and provide little power at Ha. On the other hand, both of the Pearson’s chi-squared tests have very inflated Type I error probability. One may also notice that the Pearson’s chi-squared test with observed degrees of freedom perhaps converges a little slower than the proposed test under H0.

The distribution with 1−p=0.9 provides a very weak contrast between H0 and Ha. So much so that even for n≥500, the proposed test converges very slowly under H0, and provides essentially no power at Ha. On the other hand, both of the Pearson’s chi-squared tests have a total breakdown under H0.

The following three major points are observed in Table 1, as well as in other simulation studies investigated but not presented herewithin.

The idea of the article may be explained simply by the convergence rate of ˆMI(X∗,Y∗) under H0. ˆMI(X∗,Y∗) is n-convergent, that is,

In other words, under H0, the difference between the two additive parts of ˆMI(X∗,Y∗) approaches zero very fast. However by inserting a zero in the form of four terms, as in (2), ˆMI(X∗,Y∗) is wedged into two terms, ^TA and ^TB, both of which approach zero under H0, but are at a much slower rate, that is, √n-convergent. This insertion is almost literally a keystone, splitting √nˆMI(X∗,Y∗) into two random variables and eking out asymptotic normality of ZA, of ZB, and hence of ZAB under H0. The immediate advantages of the normality of ZAB are that the knowledge of I and J is not required when testing H0, and that the test statistic seems to converge faster than Pearson’s chi-squared test under H0. On the other hand, the statistical assessment of H0 is done by two separate random pieces instead of one, as in nˆMI, and some efficiency may be lost as evidenced by the simulation studies. The observed loss of power may be considered a cost for more generality, that is, the knowledge of I and J is not required.

It is to be noted that the concept of escort distributions is essential in the arguments leading to the proposed test. Only when λ≠1, the inserts, the left-hand-sides of (5) and (6), would enable an positive variance in (12), and hence the asymptotic normality of ZAB.

It is also to be highlighted that the proposed test based on ZAB is a consistent test as stated in Proposition 3. This fact lends the utility of the proposed test in the general alternative space. That is to say, provided a sufficiently large sample, any form of dependent structure between X and Y will be detected. The test is proposed herewithin in the form of a two-sided test due to its generality. For specific forms of dependence structures between X and Y, some of the tests based on ZA, ZB or ZAB, one-sided or two-sided, may have better performance in terms of faster convergence under H0 and higher power under Ha than others. This provides a potentially fruitful direction for further investigation.

noting specifically the implied enumeration of the indexes of v corresponds to the arrangement of (i,j) as in pi,j, that is,

Let the gradient of TA with respect to pi,j for all (i,j) be denoted by ∇={∂TA/∂pi,j} with the index arrangement given in (11).