A noniterative sample size procedure for tests based on t distributions

A noniterative sample size procedure is proposed for a general hypothesis test based on the t distribution by modifying and extending Guenther's (1981) approach for the one sample and two sample t tests. The generalized procedure is employed to determine the sample size for treatment comparisons using the analysis of covariance (ANCOVA) and the mixed effects model for repeated measures (MMRM) in randomized clinical trials. The sample size is calculated by adding a few simple correction terms to the sample size from the normal approximation to account for the nonnormality of the t statistic and lower order variance terms, which are functions of the covariates in the model. But it does not require specifying the covariate distribution. The noniterative procedure is suitable for superiority tests, noninferiority tests and a special case of the tests for equivalence or bioequivalence, and generally yields the exact or nearly exact sample size estimate after rounding to an integer. The method for calculating the exact power of the two sample t test with unequal variance in superiority trials is extended to equivalence trials. We also derive accurate power formulae for ANCOVA and MMRM, and the formula for ANCOVA is exact for normally distributed covariates. Numerical examples demonstrate the accuracy of the proposed methods particularly in small samples. 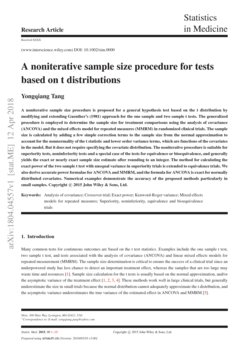 Many common tests for continuous outcomes are based on the t test statistics. Examples include the one sample t test, two sample t test, and tests associated with the analysis of covariance (ANCOVA) and linear mixed effects models for repeated measurement (MMRM). The sample size determination is critical to ensure the success of a clinical trial since an underpowered study has less chance to detect an important treatment effect, whereas the samples that are too large may waste time and resources

[1]. Sample size calculation for the t tests is usually based on the normal approximation, and/or the asymptotic variance of the treatment effect [1, 2, 3, 4]. These methods work well in large clinical trials, but generally underestimate the size in small trials because the normal distribution cannot adequately approximate the t distribution, and the asymptotic variance underestimates the true variance of the estimated effect in ANCOVA and MMRM [5].

In this article, we propose a noniterative sample size procedure for a test based on the t distribution in finite samples. The procedure generalizes Guenther’s [6] method for the one sample t test and two sample t tests with equal variances, which is extended to the two sample t test with unequal variances by Schouten [7]. In Guenther’s approach, the normal approximation is improved by adding a correction factor. As indicated by Schouten [7], Guenther’s approach still underestimates the required sample size. We also propose a slightly more conservative sample size estimate by introducing one lower order correction term to Guenther’s formula. For ANCOVA and MMRM, additional correction terms are added to account for lower order variance terms, which are functions of covariates included in the regression. There is limited information about the covariate distribution at the design stage due to the inclusion/ exclusion criteria imposed on the patients. But there is no need to specify the covariate distribution.

The proposed sample size method is suitable for superiority trials, noninferiority (NI) trials and a special case of the trials for demonstrating clinical equivalence or bioequivalence (BE). In Section 2, we present the noniterative sample size procedure for a number of t tests commonly used in the analysis of superiority trials, and assess their performance by simulation. We derive accurate power formulae for ANCOVA and MMRM, and the formula for ANCOVA is exact if the covariates are normally distributed. Section 3 studies the power and sample size determination for the NI, equivalence and BE trials, where we also obtain the exact power for the two sample t test with unequal variance in equivalence trials. Numerical examples indicate that the sample size estimate (after rounding to an integer) from the noniterative procedure is often exact and identical to that obtained by numerically inverting the power equation.

Throughout the paper, we let t(f,λ) denote the t distribution with fdegrees of freedom (d.f.) and noncentrality parameter λ, t(f) the central t distribution, F(f1,f2,λ)

the F distribution with

f1 and f2 d.f. and noncentrality parameter λ, and F(f1,f2) the central F distribution. Let zp and tf,p be respectively the pth percentiles of the normal N(0,1) and central t(f) distributions. Let Φ(⋅)

Let τ be the parameter of interest. For example, τ is the difference in the mean response between two treatment groups in comparative clinical trials. Let ^τ be the point estimate of τ, n−1V the associated variance, and ^V the estimate of the variance parameter V. Assume that ^τ and ^V are independent, and f^V/V∼χ2f. Then var(^V)=2V2/f and var(√^V)=V/(2f). Suppose we are interested in the test of equality

In comparative superiority trials, the purpose is to show that the test treatment is better than the control, and τ0 is usually set to 0. The test statistic T=(^τ−τ0)/√n−1^V∼t(f) under H0

Equations (5) and (6) are proved in the appendix by using essentially the same argument as that of Schouten [7].

We will compare formulae (5) and (6) with the two step (TS) procedure described in Tang [5]. Let f(~n) be the d.f. when the total size is ~n. In the TS approach, the sample size is estimated as

We illustrate how to use the generalized procedure in Section 2.1 to calculate the power and sample size for the one sample t test, two sample t tests with or without equal variances, ANCOVA and MMRM. These tests are commonly used in the analysis of randomized clinical trials.

The methods in Section 2 can be applied by setting τ1=μ, V=σ2, f=n−1 and ρ≈1. Note that Guenther [6] obtained the noniterative sample size formula (5), and that formula (2) yields the exact power for the one-sample t test.

The methods for the one sample t test can be adapted for crossover trials without a period effect by setting τ1 as the difference in two treatment means, and V=σ2d, where yit is the response for subject i in period t, and σ2d=var(yi1−yi2). Please refer to Section 3.3 for details.

The methods for the two sample t test can be adapted for crossover trials with a potential period effect, where τ1 is the difference in two treatment means, γ0 is the proportion of subjects assigned to the one sequence, and V=σ2d4γ0(1−γ0) for σ2d defined in Section 2.2.2. Please see Section 3.3 for details.

The d.f. of the t test is computed using the Satterthwaite approximation

The unknown σ20 and σ21 are replaced respectively by s20 and s21 in the data analysis.

Formula (2) does not produce the exact power. The exact power can be calculated using the method of Moser et al [8].

Suppose in a clinical trial, ng subjects are randomized to treatment group g (g=1 for experimental, and 0 for placebo). The total sample size is n=n0+n1. Let ygi be the response, and xgi the q×1vector of covariates (excluding the treatment status and intercept) associated with subject i in group g. Let q∗=q+2 and γg=ng/n. The data can be analyzed by the ANCOVA

where μ is the intercept, τ is the treatment effect, β is the covariate effect, and σ2 is the residual variance in ygi that is unexplained by the covariates and treatment.

At the design stage, xgi’s are typically unknown. The power is given by

is the probability density function (PDF) of

~Υ=(n−1−q)Υ/q, and Vx(~Υ)=1+q~Υ/(n−q−1)nγ0γ1. We assume ~Υ∼F(q,n−q−1). The assumption holds exactly, and Equation (10) yields the exact power if xgi is normally distributed [5]. For nonnormal covariates, the power estimation based on the approximation ~Υ∼F(q,n−q−1) generally leads to very accurate power estimate in randomized trials (i.e. no systematic difference in the distribution of xgi between two groups), and this will be demonstrated in Section 4. To avoid numerical integration, we approximate Equation (10) by replacing ~Υ by E(~Υ)≈(n−1−q)/(n−3−q)

In large trials, the sample size is commonly estimated based on the normal approximation and the asymptotic variance var(^τ)≈σ2/(nγ0γ1)

Another common approach is to invert the power formula below based on the t distribution and asymptotic variance [4],

and it yields slightly better performance than Borm et al [9] approach, in which the total sample size from the normal approximation (12) is inflated by 2 (i.e. 1 subject per arm).

The solution to Equation (14) is given in the appendix, and it satisfies nasy+q<~n<nasy+q+3. Inserting ~n≈nasy+q+1 into the last term in Equation (14) gives

Plugging ~n into Equations (5) and (6) yields the size based on the t distribution (ρ=1). We use the approximation (15) instead of the explicit solution to Equation (14) to slightly simplify the calculation. It also enables the generalization of the method to MMRM that will be investigated in Section 2.2.5.

In the two step approach, Equation (7) is calculated as

Suppose in a clinical trial, n subjects are randomly assigned to the experimental (g=1) or control (g=0) treatment. Let ng and γg=ng/n be the number and proportion of subjects randomized to group g. Let ygi=(ygi1,…,ygip)′ be the outcomes collected at p post-baseline visits, and xgi the q×1 vector of covariates for subject i in group g. Let q∗=q+2. In clinical trials, the data are missing mainly due to dropout [5]. At the design stage, it is reasonable to assume the missing data pattern is monotone in the sense that if ygij is observed, then ygit’s are observed for all t≤j. Let ngj and πgj=ngj/ng be the number and proportion of subjects retained at visit j in group g. The total number of subjects retained at visit j is mj=∑1g=0ngj, and the pooled retention rate at visit j is ¯πj=∑1g=0γgπgj. Without loss of generality, we sort the data so that within each group, subjects who stay in the trial longer will have smaller index i than subjects who discontinue earlier.

The following MMRM is often used to analyze longitudinal clinical data collected at a fixed number of timepoints [10, 11]

where Σ is an unstructured (UN) covariance matrix. A structured covariance matrix (possibly induced via the use of random effects) can be useful when individuals have a large number of observations, or varying time points of observations [11]. In MMRM, inference is often made based on the restricted maximum likelihood (REML) and Kenward-Roger [12] adjusted variance estimate to reduce the small sample bias [5].

Tang [5] derives the REML estimate for model (17), and studies its theoretical properties

The treatment effect estimate at visit p is ^τp=∑pj=1^lpj^τ––j, and its Kenword-Roger variance estimate is

We use slightly different notation in MMRM. We let τ1 denote the treatment effect at first timepoint. The true value for τj under H1 is τj1, and its value under H0 is τj0. The test statistic for H0:τp=τp0 vs H1:τp=τp1,

approximately follows a t distribution under H0, and the d.f. is obtained from the Satterthwaite approximation [12]

provides a roughly unbiased estimate of the variance

In the MMRM analysis, xgi’s are assumed to be fixed, but unknown at the design stage. In the power calculation, we will replace Vxj’s, ^f and ˆvar(^τp) by their expected values

One may approximate V∗τ by Vτ, and/or f by fo=(m1−q∗)ρo to simplify the calculation, where ρo=∑pj=1l2pjσ2j~Vx1/∑pj=1l2pjσ2j~Vxj can be interpreted as the fraction of observed information among subjects retained at visit 1. The following approximation of Tang [5] is only slightly less accurate than Equation (22) even in small samples