A Non-Local Means Filter for Removing the Poisson Noise 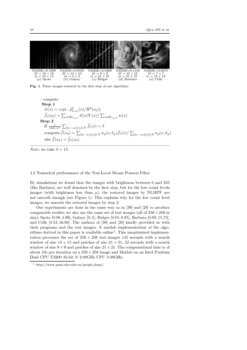 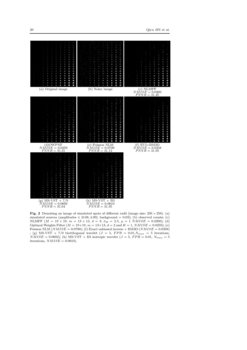 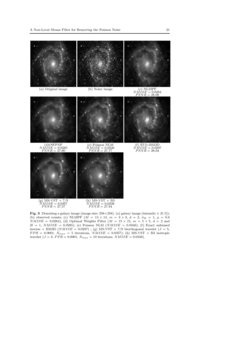 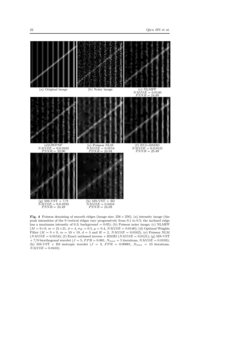 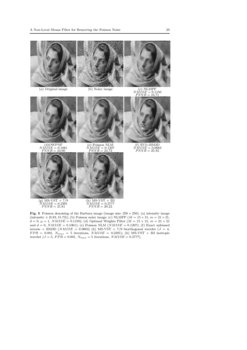 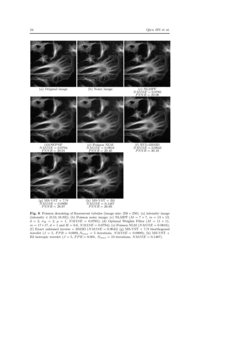 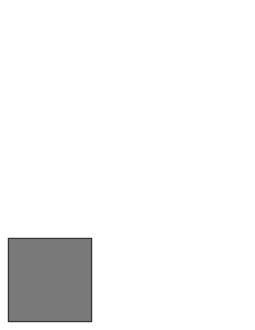 Noise is inevitable in any image device. A digital imaging system consists of an optical system followed by a photodetector and associated electrical filters. The photodetector converts the incident optical intensity to a detector current, i.e. photons to electrons. During the process, the true signals are contaminated by many different sources of noise. The Poisson noise appears in low-light conditions when the number of collected photons is small, such as night vision, medical imaging, underwater imaging, microscopic imaging, optical microscopy imaging and astronomy imaging. Such a noise is signal-dependent, and requires to adapt the usual denoising approaches.

The key challenge in Poisson intensity estimation problems is that the variances of the observed counts are different. As a result, many methods are introduced to transform the Poisson distributed noise to the data approximately Gaussian and homoscedastic. These methods are called Variance Stabilizing Transformations (VST), such as Anscombe root transformation (1948

Maxmum Likelihood (ML) estimation (1996 van1996comparing , 2009moon2009three ) and Similarity Measure (SM) (2006 alter2006intensity ) are also found to be effective since they can account for the special properties of the Poisson distribution. Others methods like as Complexity-Penalized Likelihood Estimation (CPLE) (2000 nowak2000statistical , 2005 kolaczyk2005multiscale ) and Total Variation (TV) seminorm (2009 beck2009fast ), have been introduced to deal with the Poisson noise. Le et al. ((le2007variational, )) have adapted the successful ROF model for total variation regularization to deal with Poisson noise. The gradient descent iteration for this model replaces the regularization parameter with a function.

The Non-Local Means Filter has been proposed by Buades et al (2005 buades2005review ) to denoise images damaged by additive white Gaussian noise. It is based on the similarity phenomenon existing very often in natural images, and assumes that there is enough redundant information (pixels having identical noise-free value) in the image to reduce the noise significantly. This filter is known to efficiently reduce the noise and to preserve structures. Some authors (see 2008 boulanger2008non , 2010 deledalle2010poisson ) combine the Non-Local Means method with other methods to restore the Poisson noise. Deledalle et al. (2010 (deledalle2010poisson, )) proposed an extension of the Non-Local Means for images damaged by Poisson noise. It is based on probabilistic similarities to compare noisy patches and patches of a pre-estimated image.

In this paper, a new image denoising algorithm to deal with the Poisson noise model is given, which is based on the idea of Non-Local Mean. Our main idea is as follows: we first obtain an ”Oracle” estimator by minimized a very tight upper bound of the Mean Square Error with changing the size of search window. The ”Oracle” estimator depends on the unknown target function (original image), whose concept is developed in Donoho and Johnstone donoho1994ideal . So the ”Oracle” estimator is not computable, but it can help us to find an available algorithm in mathematic theory. We second establish a theorem by the concept of the ”Oracle” to show that the Non-Local Means Filter can effectively deal with Poisson noise with some modification. Finally, replacing the unknown target function by some estimators, we construct our new algorithm called Non-Local Means Poisson Filter and demonstrate in statistic theory that the filter converges at the usual optimal rate. The filter is as simple as the classic Non-Local Means and the simulation results show that our filter is very competitive.

We suppose that the original image of the object being photographed is a integrable two-dimensional function f(x), x∈(0,1]×(0,1]. Let the mean value of f in a set Bx be

Typically we observe a discrete dataset of counts Y={N(Bx)}, where N(Bx)

is a Poisson random variable of intensity

This model has been used effectively in many contexts. The Poisson noise model can be rewritten in the regression form

Let us set some notations to be used throughout the paper. The Euclidean norm of a vector

x=(x1,...,xd)∈Rd is denoted by ∥x∥2=(∑di=1x2i)12. The supremum norm of x is denoted by ∥x∥∞=sup1≤i≤d|xi|. The cardinality of a set A is denoted cardA. For a positive integer N the uniform N×N grid of pixels on the unit square is defined by

Each element x of the grid I will be called pixel. The number of pixels is n=N2. For any pixel x0∈I and a given h>0, the square window of pixels

will be called search window at x0. We naturally take h as a multiple of 1N (h=kN for some k∈{1,2,⋯,N}). The size of the square search window Ux0,h is the positive integer number

For any pixel x∈Ux0,h and a given η>0 a second square window of pixels Ux,η will be called patch at x. Like h, the parameter η is also taken as a multiple of 1N. The size of the patch Ux,η is the positive integer

The Non-Local Means algorithm (2005 buades2005review ) can be described as follows. For any x∈I,

where the weights w(x) are given by

Here H is a bandwidth parameter, Ux0,η is given by (4), κ(y)>0 are some fixed kernel, and Tx is the translation mapping:

In practice the bandwidth parameter H is often taken as a linear function of σ (see buades2005review ).

In order to adapt the Non-Local Means algorithm to the Poisson noise, we introduce an ”Oracle” estimator (for details on this concept see Donoho and Johnstone (1994 donoho1994ideal )). Denote

H(x) is a control function subject to

Note that the function ρf,x0(x)≥0 characterizes the similarity of the image brightness at the pixel x with respect to the pixel x0, therefore we shall call ρf,x0 similarity function. The usual bias-variance decomposition (cf. e.g. (mandel1982use, ; terrell1992variable, ; fan1993local, )) of the Mean Squared Error (MSE)

The inequality (2.3) combining with (12) implies the following upper bound

We shall define a family of estimates by minimizing the function g(wh) by changing the width of the search window. With a Poisson noise in low-light conditions, the upper bound of signal function is small, so we let Γ=sup{f(x):x∈I}. According to the similarity phenomenon existing very often in natural images, we suppose that the function f satisfies the local Hölder condition

where β>0 and L>0 are constants, h>0, η>0 and x0∈I. The following theorem gives the rate of convergence of the ”Oracle” estimator and the proper width h of the search window.

For the proof of this theorem see Section 6.1.

This theorem shows that at least from the practical point of view, it is justified to optimize the upper bound g(w) instead of optimizing the risk E(f∗h(x0)−f(x0))2 itself. The theorem also justifies that we can choose a small search window in place of the whole observed image to estimate a point, without loss of visual quality. That is why we only consider small search windows for the simulations of our algorithm.

The following theorem implies that it is reasonable to let ˆρx0(x) be the estimator of ρf,x0(x).

For the proof of this theorem see Section 6.2.

As a result, it is natural to define an adaptive estimator ˆfh by

Now, we turn to the study of the convergence of the Non-Local Means Poisson Filter. Due to the difficulty in dealing with the dependence of the weights we shall consider a slightly modified version of the proposed algorithm: we divide the set of pixels into two independent parts, so that the weights are constructed from the one part, and the estimation of the target function is a weighted mean along the other part. More precisely, we split the set of pixels into two parts I=I′x0∪I′′x0 for any x0∈I where

and with Ux0,h given by (4). The adaptive estimator ˆf′h is denoted by

In the next theorem we prove that the Mean Squared Error of the estimator ˆf′h(x0) converges at the rate n−2β2β+2 which is the usual optimal rate of convergence for a given Hölder smoothness β>0 (see e.g. Fan and Gijbels (1996 FanGijbels1996 )).

For the proof of this theorem see Section 6.2.

Throughout the simulations, we use the following algorithm to compute the Non-Local Means Poisson estimator ˆfh(x0). The input values of the algorithm are Y(x), x∈I (the image), and two numbers m and M are given by (6) and (5) respectively. In order to improve the results, we introduce a smoothed version of the estimated similarity distance

As smoothing kernels κ we use the Gaussian kernel

where hg is a constant, and the following kernel: for y∈Ux0,η,

For the simulation we use the kernel κ0(y) defined by (32). We have seen experimentally that when we take the filtering function H2(x0) as μ⋅√¯¯¯f(x0), where μ is a constant depending on the character of the image, to obtain a denoising of high visual quality. We mention that throughout the paper we symmetrize images near the boundary.

Let {M,m,hg} be the parameters.

By simulations we found that the images with brightness between 0 and 255 (like Barbara) are well denoised by the first step, but for the low count levels images (with brightness less than μ), the restored images by NLMPF are not smooth enough (see Figure 1). This explains why for the low count level images, we smooth the restored images by step 2.

Table 1 shows the NMISE values of images reconstructed by NLMPF, OWPNF (jin2012new, ), Poisson NLM (deledalle2010poisson, ), EUI+BM3D makitalo2011optimal , MS-VST+7/9 ZHANG2008WAVELETS and MS-VST+B3 ZHANG2008WAVELETS . Our algorithm reach the best in the case of Galaxy[0,5], while OWPNF reach the best in the case of Spots[0.08,4.99]; for Ridges[0.05,0.85], Barbara[0.93,15.73], and Cells[0.53,16.93], the method EUI+BM3D gives the best results, but our method is also very competitive. Table 2 shows the PSNR values of images reconstructed. Our algorithm also reach the best in the case of Galaxy[0,5]. The method EUI+BM3D have the highest PSNR value. However, the most important evaluation criteria is the visual quality of restored image. Figures 2- 6 illustrate the visual quality of these denoised images. It is obvious that The visual quality of the outputs of our method have high visual quality and many details Remained. For example, in the case of restored images of Spots (cf. Figures 2), our algorithm and OWPNF remain most spots. We can see clearly 7 spots at the third column (from left) in Figures 2 (c), while EUI+BM3D just remains 4 spots, Poisson NLM Makes several spots sticking together, the images restored by MS-VST + 7/9 and MS-VST + B3 are not smooth enough. In the case of Galaxy (cf. Figures 3), visually, our algorithm best preserves the fine textures. In the other case, our method also lead to good result visually.

In this paper, we have present a new image denoising algorithm to deal with the Poisson noise model, which is based on the idea of Non-Local Mean. The ”Oracle” estimator is obtained by minimized a very tight upper bound of the Mean Square Error with changing the size of search window. It help to establish a theorem to show that the Non-Local Means Filter can effectively deal with Poisson noise with some modification. As a result, we successfully construct the new algorithm called Non-Local Means Poisson Filter and demonstrate in statistic theory that the filter converges at the usual optimal rate. The filter is as simple as the classic Non-Local Means and the simulation results show that our filter is very competitive. The idea of how to construct an algorithm for Poisson noise model is creative. With our idea, many algorithms to Remove Gaussian Noise could deal with the Poisson noise with some modification.

6 Appendix: Proofs of the main results

Let h minimize the latter term of the above inequality (42). Then

from which we infer that

We shall use following lemma to finish the Proof of Theorem 3.1. The lemma can be deduced form the results in Borovkov borovkov2000estimates , see also Merlevede, Peligrad and Rio merleve2010bernstein

then there are two positive constants c1 and c2 depending only on δ, γ and K such that, for any t>0,

Since Y(x) has the Poisson distribution, with mean f(x) and variance f(x),

From the inequality (46), we easily deduce

By Lemma 1, we see that there are two positive constants c5 and c6 such that for any z>0,

From this inequality we easily deduce that

In the set B, the inequality (50) implies that