The need to compute the intersections between a line and a high-order curve or surface arises in a large number of finite element applications. Such intersection problems are easy to formulate but hard to solve robustly. We introduce a non-iterative method for computing intersections by solving a matrix singular value decomposition (SVD) and an eigenvalue problem. That is, all intersection points and their parametric coordinates are determined in one-shot using only standard linear algebra techniques available in most software libraries. As a result, the introduced technique is far more robust than the widely used Newton-Raphson iteration or its variants. The maximum size of the considered matrices depends on the polynomial degree q of the shape functions and is 2q × 3q for curves and 6 q^2 × 8 q^2 for surfaces. The method has its origin in algebraic geometry and has here been considerably simplified with a view to widely used high-order finite elements. In addition, the method is derived from a purely linear algebra perspective without resorting to algebraic geometry terminology. A complete implementation is available from http://bitbucket.org/nitro-project/. 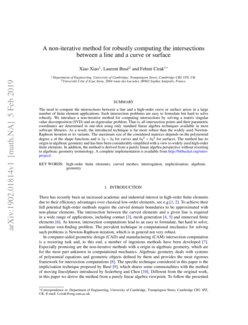 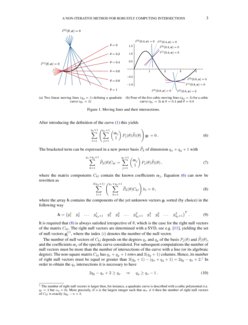 It is well known that the composition of a D-finite function with an alg...
Manuel Kauers, et al. ∙

Changing Views on Curves and Surfaces

Determining surfaces of revolution from their implicit equations

There has recently been an increased academic and industrial interest in high-order finite elements due to their efficiency advantages over classical low-order elements, see e.g.[1, 2]. To achieve their full potential high-order methods require the curved domain boundaries to be approximated with non-planar elements. The intersection between the curved elements and a given line is required in a wide range of applications, including contact [3], mesh generation [4, 5] and immersed finite elements [6]. As known, intersection computations lead to an easy to formulate, but hard to solve, nonlinear root-finding problem. The prevalent technique in computational mechanics for solving such problems is Newton-Raphson iteration, which is in general not very robust.

In computer-aided geometric design (CAD) and manufacturing (CAM) intersection computation is a recurring task and, to this end, a number of ingenious methods have been developed [7]. Especially promising are the non-iterative methods with a origin in algebraic geometry, which are for the most part unknown in computational mechanics. Algebraic geometry deals with systems of polynomial equations and geometric objects defined by them and provides the most rigorous framework for intersection computations [8]. The specific technique considered in this paper is the implicisation technique proposed by Busé [9], which shares some commonalities with the method of moving lines/planes introduced by Sederberg and Chen [10]. Different from the original work, in this paper we derive the method from a purely linear algebra viewpoint. To follow the presented derivations it is sufficient to only know the notion of the algebraic degree of a curve or surface. The algebraic degree of a curve or surface is defined as its number of intersections with a line. Counting all intersections (real, complex, multiple ones and ones at infinity), the algebraic degree of a polynomial curve of degree q

and the corresponding tensor-product surface are

q and 2q2, respectively. As will become clear, adopting a linear algebra viewpoint has the added benefit that many linear algebra techniques, like preconditioning and various matrix decompositions, become readily available for intersection computations.

In the following, we first discuss the intersection between a planar Lagrange curve and a line and provide an easy to follow illustrative example. This simple case is sufficient to introduce and discuss the key aspects of the proposed non-iterative technique. Its extension to the surface case is straightforward and is discussed last.

2 Intersection of lines with curves

where Pj(θi) is the Vandermonde matrix and θi is the parametric coordinate of the i-th Lagrange node. Following a similar approach a curve given in any other polynomial basis can be re-expressed in the power basis.

To define a point →x(θ) on the curve as the intersection of several moving lines, or pencils of lines, consider

is an auxiliary vector collecting the parameters of the line. For a fixed

θ equation (3) describes a line and the line moves with the parameter θ, see Figure (a)a . The three parameters of the line are assumed to be polynomial functions given by

After introducing the definition of the curve (1) this yields

where the matrix components Ckl contain the known coefficients →αj. Equation (6) can now be rewritten as

Next, the intersection of a given parametric line

with the curve →x(θ) is considered, where →c1=(c11,c21)\trans and →c0=(c10,c20)\trans are two given vectors. We require that the determined set moving lines {l(i)(θ,→x)=0} and →r(ξ) intersect at the same point to be yet determined. According to (5) at the common intersection point it is required that

These equations describe the intersection of each moving line l(i)(θ,→x)=0 with the given line →r(ξ) and can be rewritten as

with Ali and Bli representing the components of two matrices →A and →B. Both matrices have qg+1 rows and 2qg−qx+2 or more columns. To obtain ˜Pl(θ) and ξ that satisfy (15) the following generalised eigenvalue problem is considered

That is, the eigenvalues ξ(j) are the parametric coordinates of the intersection points on the line →r(ξ)

A non-complex eigenvalue ξ(j) of (16), or its corresponding square eigenvalue problem, gives the potential intersection point →r(ξ(j)). The respective unknown parameter value θ(j) on the curve satisfies the equation →x(θ(j))=→r(ξ(j)), which is a hard to solve nonlinear problem. According to (15) and (16), however, the left null vector →ϕ(j) corresponding ξ(j) is proportional to the vector ˜Pl(θ(j)), which is exploited to determine θ(j). More precisely, if there is a single parameter value θ(j) the ratio of any two consecutive components yields

It is assumed here that the monomials in ˜Pi are sorted in increasing order so that the ratio of two consecutive entries is simply θ. If there are p parameter values (θ(j,1),…,θ(j,p)) corresponding to the eigenvalue ξ(j), then the corresponding left null vector space is given by a matrix →K with p rows. Keeping the previous assumption on the ordering of the monomials in ˜Pi, we define the p×p matrices →Δi by taking the columns i to p+i of →K. Then, the parameter values (θ(j,1),…,θ(j,p)) are obtained by solving a generalised eigenvalue problem

The intersections between the given line

and the curve →x(θ) are sought.

As discussed, the degree qg of the auxiliary polynomial needs to satisfy qg≥qx−1=2. In this example choosing qg=2 yields matrices →A and →B that have the dimensions 3×3 and it is straightforward to compute the eigenvalues ξ of the generalised eigenvalue problem (16). To illustrate the more challenging case with non-square matrices →A and →B, which turns out to be inevitable in the case of surfaces, we choose here qg=3 such that

One approach to obtaining the generalised eigenvalues of matrices →A and →B is to use pencil reduction, see [12, 13, 14]

, which is not a widely used linear algebra operation and may introduce additional numerical issues because of several numerical rank estimations. Alternatively, the eigenvalue problems defined by square submatrices

→A□ and →B□ of the largest size, e.g. the first four columns of →A and →B, can be considered

To demonstrate this observation, the intersection points with two different pairs of largest square submatrices →A□ and →B□ are computed. The eigenvalues for the problem defined by the first four columns of →A and →B are

The fictitious points can also be detected without computing several eigenvalue problems and comparing their eigenvalues. This is accomplished by determining the parametric coordinates of the intersection points θ(j) on the curve →x(θ). As indicated in (17) the parametric coordinates are computed using the eigenvectors. As an example, consider the eigenvalue problem (25) defined by first four colums of →A and →B. Its eigenvalues are given on (26) and the coordinates of the intersection points are

The respective parameters θ(j) of the intersection points are

3 Intersection of lines with surfaces

In line with the curve case, a point →x(→θ) on the surface is defined as the intersection of several moving planes of the form

where →g(→θ)=(g1(→θ),g2(→θ),g3(→θ),g4(→θ))\trans is an auxiliary vector collecting the parameters of the plane. Although l(→θ,→x)=0 is now a plane instead of a line, it is still denoted with the same symbol to keep the notation simple. The parameters →g(→θ) are assumed to be of the following form

The bi-degree (q1g,q2g) of the power basis ˜P(→θ) has to be sufficiently high to describe all the intersection points of the surface →x(→θ) with a line.

The planes describing the surface →x(→θ) have to satisfy

which can be rearranged to

As in the curve case, the degree of ˜P(→θ) along the θ2 direction can be chosen as q2g≥q2x−1 yielding

By symmetry, it is also valid to choose q1g≥q1x−1 and q2g≥2q2x−1. After the right null vectors of C→k→l are computed the subsequent steps in computing the intersections are identical to the curve case.

Finally, for the sake of completeness, we mention that the introduced intersection algorithm also applies to triangular finite elements. If →x(→θ) is a triangular parametric surface of degree qx then the degree qg of the auxiliary vector →g(→θ) has to be chosen to satisfy qg≥2(qx−1); see also [9, §3].

The introduced method is able to determine in one-shot all the intersection points between a line and a curve or surface. It can be applied to curves or surfaces given in any polynomial basis, like the Lagrange or Bernstein, after a straightforward conversion to the power basis. Aspects requiring further research include cases for which the eigenvalue problem (18) is degenerate and the preconditioning of the eigenvalue problem (25). In the accompanying implementation several choices have been considered for both.