This paper is concerned with minimizing the average of n cost functions over a network, in which agents may communicate and exchange information with their peers in the network. Specifically, we consider the setting where only noisy gradient information is available. To solve the problem, we study the standard distributed stochastic gradient descent (DSGD) method and perform a non-asymptotic convergence analysis. For strongly convex and smooth objective functions, we not only show that DSGD asymptotically achieves the optimal network independent convergence rate compared to centralized stochastic gradient descent (SGD), but also explicitly identify the non-asymptotic convergence rate as a function of characteristics of the objective functions and the network. Furthermore, we derive the time needed for DSGD to approach the asymptotic convergence rate, which behaves as K_T=O(n^16/15/(1-ρ_w)^31/15), where (1-ρ_w) denotes the spectral gap of the mixing matrix of communicating agents. 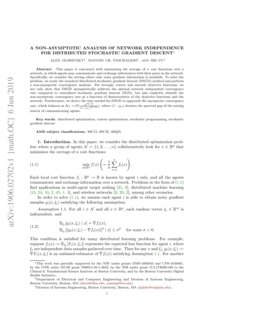 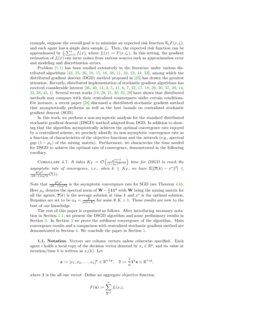 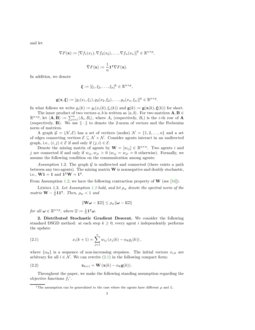 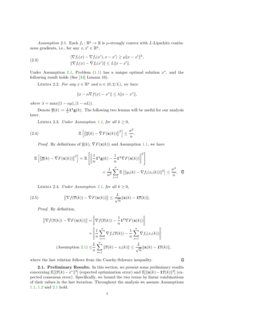 This paper considers the problem of decentralized optimization with a co...
Zhi Li, et al. ∙

We study a distributed framework for stochastic optimization which is in...
Shi Pu, et al. ∙

In this paper, we consider the distributed optimization problem where a group of agents N={1,2,…,n} collaboratively look for x∈Rp that minimizes the average of n cost functions:

Each local cost function fi:Rp→R is known by agent i only, and all the agents communicate and exchange information over a network. Problems in the form of (1) find applications in multi-agent target seeking [32, 8]

In order to solve (1), we assume each agent i is able to obtain noisy gradient samples gi(x,ξi) satisfying the following assumption: For all i∈N and all x∈Rp

This condition is satisfied for many distributed learning problems. For example, suppose fi(x):=Eξi[Fi(x,ξi)]

i, where ξi are independent data samples gathered over time. Then for any x and ξi, gi(x,ξi):=∇Fi(x,ξi)

is an unbiased estimator of

∇fi(x) satisfying Assumption 1. For another example, suppose the overall goal is to minimize an expected risk function EζF(x,ζ), and each agent has a single data sample ζi. Then, the expected risk function can be approximated by 1n∑ni=1fi(x), where fi(x):=F(x,ζi). In this setting, the gradient estimation of fi(x) can incur noise from various sources such as approximation error and modeling and discretization errors.

In this work, we perform a non-asymptotic analysis for the standard distributed stochastic gradient descent (DSGD) method adapted from DGD. In addition to showing that the algorithm asymptotically achieves the optimal convergence rate enjoyed by a centralized scheme, we precisely identify its non-asymptotic convergence rate as a function of characteristics of the objective functions and the network (e.g., spectral gap (1−ρw) of the mixing matrix). Furthermore, we characterize the time needed for DSGD to achieve the optimal rate of convergence, demonstrated in the following corollary.

Note that θ2σ2(2θ−1)nμ2k is the asymptotic convergence rate for SGD (see Theorem 3). Here ρw denotes the spectral norm of W−1n11⊺ with W being the mixing matrix for all the agents, ¯¯¯x(k) is the average solution at time k and x∗ is the optimal solution. Stepsizes are set to be αk=θμ(k+K) for some θ,K>1. These results are new to the best of our knowledge.

The rest of this paper is organized as follows. After introducing necessary notation in Section 1.1, we present the DSGD algorithm and some preliminary results in Section 2. In Section 3 we prove the sublinear convergence of the algorithm. Main convergence results and a comparison with centralized stochastic gradient method are demonstrated in Section 4. We conclude the paper in Section 5.

Vectors are column vectors unless otherwise specified. Each agent i holds a local copy of the decision vector denoted by xi∈Rp, and its value at iteration/time k is written as xi(k). Let

where 1 is the all one vector. Define an aggregate objective function

In addition, we denote

The inner product of two vectors a,b is written as ⟨a,b⟩. For two matrices A,B∈Rn×p, let ⟨A,B⟩:=∑ni=1⟨Ai,Bi⟩, where Ai (respectively, Bi) is the i-th row of A (respectively, B). We use ∥⋅∥ to denote the 2-norm of vectors and the Frobenius norm of matrices.

Denote the mixing matrix of agents by W=[wij]∈Rn×n. Two agents i and j are connected if and only if wij,wji>0 (wij=wji=0 otherwise). Formally, we assume the following condition on the communication among agents: The graph G is undirected and connected (there exists a path between any two agents). The mixing matrix W is nonnegative and doubly stochastic, i.e., W1=1 and 1⊺W=1⊺. From Assumption 1.1, we have the following contraction property of W (see [35]):

Let Assumption 1.1 hold, and let ρw denote the spectral norm of the matrix W−1n11⊺. Then, ρw<1 and

We consider the following standard DSGD method: at each step k≥0, every agent i independently performs the update:

where {αk} is a sequence of non-increasing stepsizes. The initial vectors xi,0 are arbitrary for all i∈N. We can rewrite (3) in the following compact form:

Throughout the paper, we make the following standing assumption regarding the objective functions fi.111The assumption can be generalized to the case where the agents have different μ and L. Each fi:Rp→R is μ-strongly convex with L-Lipschitz continuous gradients, i.e., for any x,x′∈Rp,

Under Assumption 1, Problem (1) has a unique optimal solution x∗, and the following result holds (See [35] Lemma 10).

Denote ¯¯¯g(k):=1n1⊺g(k). The following two lemma will be useful for our analysis later.

where the last relation follows from the Cauchy-Schwarz inequality. ■

In this section, we present some preliminary results concerning E[∥¯¯¯x(k)−x∗∥2] (expected optimization error) and E[∥x(k)−1¯¯¯x(k)∥2] (expected consensus error). Specifically, we bound the two terms by linear combinations of their values in the last iteration. Throughout the analysis we assume Assumptions 1, 1.1 and 1 hold.

The next result is a corollary of Lemma 5.

Concerning the expected consensus error E[∥x(k)−1¯¯¯x(k)∥2], we have the following lemma.

We are now ready to derive some preliminary convergence results for Algorithm (4). First, we provide a uniform bound on the iterates generated by Algorithm (4) (in expectation) for all k≥0. Then based on the lemma established in Section 2.1, we prove the sublinear convergence rates E[∥¯¯¯x(k)−x∗∥2]=O(1k) and E[∥x(k)−1¯¯¯x(k)∥2]=O(1k2).

From now on we consider the following stepsize policy:

We derive a uniform bound on the iterates generated by Algorithm (4) (in expectation) for all k≥0.

We can further bound Ri as follows. From the definition of Xi,

In light of Lemma 8 and inequality (14), further noticing that the choice of 0 is arbitrary in the proof of Lemma 8, we obtain the following uniform bound for E[∥x(k)−1x∗∥2].

where ω(k)>0 is to be determined later.

Notice that the sublinear rates obtained in Lemma 10 are network dependent since ^W depends on the spectral gap (1−ρw), a function of the mixing matrix W.

In this section, we perform a non-asymptotic analysis of network independence for Algorithm (4). Specifically, in Theorem 1 and Corollary 1, we show that U(k)=θ2σ2(1.5θ−1)nμ2k+O(n(1−ρw)2)1k2, where the first term is network independent and the second (higher-order) term depends on (1−ρw). In Theorem 2, we further improve the result and compare it with centralized stochastic gradient descent. We show that asymptotically, the two methods have the same convergence rate θ2σ2(2θ−1)nμ2k. In addition, it takes KT=O(n(1−ρw)2) time for Algorithm (4) to reach this asymptotic rate of convergence.

We start with a useful lemma.

Recalling Lemma 13 and the definition of ~U(k) yields the desired result. ■

Next, we estimate the constants appearing in Theorem 1 and derive their dependency on the network size n and the spectral gap (1−ρw).

In light of Lemma 9, Lemma 10 and Theorem 1, we have the following corollary.

We improve the result of Theorem 1 and Corollary 1 with further analysis.