This paper presents a new predictor-corrector numerical scheme suitable for fractional differential equations. An improved explicit Atangana-Seda formula is obtained by considering the neglected terms and used as the predictor stage of the proposed method. Numerical formulas are presented that approximate the classical first derivative as well as the Caputo, Caputo-Fabrizio and Atangana-Baleanu fractional derivatives. Simulation results are used to assess the approximation error of the new method for various differential equations. In addition, a case study is considered where the proposed scheme is used to obtained numerical solutions of the Gierer-Meinhardt activator-inhibitor model with the aim of assessing the system's dynamics. 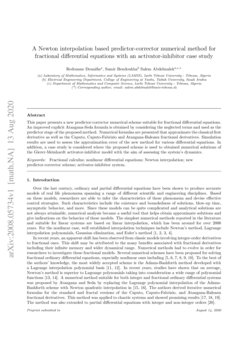 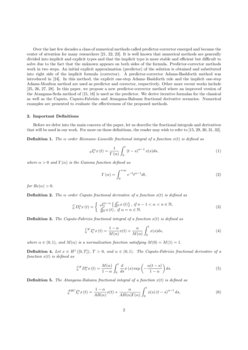 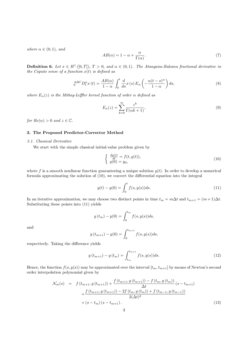 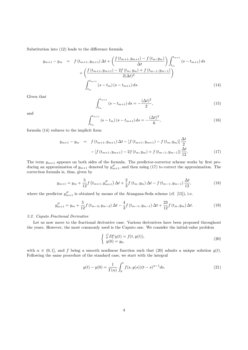 In this paper, we propose a numerical scheme of the predictor-corrector ...
Sami Aljhani, et al. ∙

In this article, we deal with the efficient computation of the Wright fu...
Lidia Aceto, et al. ∙

Over the last century, ordinary and partial differential equations have been shown to produce accurate models of real life phenomena spanning a range of different scientific and engineering disciplines. Based on these models, researchers are able to infer the characteristics of these phenomena and devise effective control strategies. Such characteristics include the existence and boundedness of solutions, blow-up time, asymptotic behavior, and more. Since these models can be quite complicated and analytical solutions are not always attainable, numerical analysis became a useful tool that helps obtain approximate solutions and give indications on the behavior of these models. The simplest numerical methods reported in the literature and suitable for linear systems are based on linear interpolation, which has been around for over 2000 years. For the nonlinear case, well established interpolation techniques include Newton’s method, Lagrange interpolation polynomials, Gaussian elimination, and Euler’s method

In recent years, an apparent shift has been observed from classic models involving integer-order derivatives to fractional ones. This shift may be attributed to the many benefits associated with fractional derivatives including their infinite memory and wider dynamical range. Numerical methods had to evolve in order for researchers to investigate these fractional models. Several numerical schemes have been proposed for solving fractional ordinary differential equations, especially nonlinear ones including

Diethelm1998 ; Ford2001 ; Odibat2008 ; Moghaddam2016 ; Asl2017 ; Patricio2019 . To the best of the authors’ knowledge, the most widely accepted scheme is the Adams-Bashforth method developed with a Lagrange interpolation polynomial basis Zhang2018 ; Jain2018 . In recent years, studies have shown that on average, Newton’s method is superior to Lagrange polynomials taking into consideration a wide range of polynomial functions Srivastava2012a ; Srivastava2012b . A numerical method suitable for both integer and fractional ordinary differential systems was proposed by Atangana and Seda by replacing the Lagrange polynomial interpolation of the Adams-Bashforth scheme with Newton quadratic interpolation in Atangana2020 ; Atangana2020Corrigendum . The authors derived iterative numerical formulas for the standard and fractal versions of the Caputo, Caputo-Fabrizio, and Atangana-Baleanu fractional derivatives. This method was applied to chaotic systems and showed promising results Alkahtani2019 ; Atangana2020a ; Atangana2020c . The method was also extended to partial differential equations with integer and non-integer orders Atangana2020b .

Over the last few decades a class of numerical methods called predictor-corrector emerged and became the center of attention for many researchers Gragg1964 ; Marciniak2017 ; Butcher2016 . It is well known that numerical methods are generally divided into implicit and explicit types and that the implicit type is more stable and efficient but difficult to solve due to the fact that the unknown appears on both sides of the formula. Predictor-corrector methods work in two steps. An initial explicit approximation (predictor) of the solution is obtained and substituted into right side of the implicit formula (corrector). A predictor-corrector Adams-Bashforth method was introduced in Diethelm2002 . In this method, the explicit one-step Adams–Bashforth rule and the implicit one-step Adams-Moulton method are used as predictor and corrector, respectively. Other more recent works include Nguyen2017 ; Douaifia2019 ; Kumar2019 ; Heris2019 . In this paper, we propose a new predictor-corrector method where an improved version of the Atangana-Seda method of Atangana2020 ; Atangana2020Corrigendum is used as the predictor. We derive iterative formulas for the classical as well as the Caputo, Caputo-Fabrizio and Atangana-Baleanu fractional derivative scenarios. Numerical examples are presented to evaluate the effectiveness of the proposed methods.

Before we delve into the main concern of the paper, let us describe the fractional integrals and derivatives that will be used in our work. For more on these definitions, the reader may wish to refer to Atangana2020 ; Podlubny ; Kilbas2006 ; CaputoFabrizio2015 ; AtanganaBaleanu2016 .

We start with the simple classical initial-value problem given by

where f is a smooth nonlinear function guaranteeing a unique solution y(t). In order to develop a numerical formula approximating the solution of (10), we convert the differential equation into the integral

In an iterative approximation, we may choose two distinct points in time tm=mΔt and tm+1=(m+1)Δt. Substituting these points into (11) yields

Hence, the function f(s,y(s)) may be approximated over the interval [tm,tm+1] by means of Newton’s second order interpolation polynomial given by

Substitution into (12) leads to the difference formula

formula (14) reduces to the implicit form

The term ym+1 appears on both sides of the formula. The predictor-corrector scheme works by first producing an approximation of ym+1 denoted by yPm+1, and then using (17) to correct the approximation. The correction formula is, thus, given by

where the predictor yPm+1 is obtained by means of the Atangana-Seda scheme (cf. Atangana2020 ), i.e.

Let us now move to the fractional derivative case. Various derivatives have been proposed throughout the years. However, the most commonly used is the Caputo one. We consider the initial-value problem

with α∈(0,1], and f being a smooth nonlinear function such that (20) admits a unique solution y(t). Following the same procedure of the standard case, we start with the integral

At the single point tm+1=(m+1)Δt, we have the following

with t0=0. Function f(s,y(s)) can be approximated over the sub-interval [ti,ti+1] as a polynomial by means of

The four different integrals in (27) can be calculated as

respectively. By substituting these calculations into (27), we obtain

In order to simplify the formulas to come, let us define the expresion

Using this notation, (32) can be rewritten in the form

Formula (35) will serve as our implicit part, i.e. the corrector. The terms ym+1 on the right hand side will be replaced by the predictor yPm+1, which will be an improved version of the Atangana-Seda scheme derived for the Caputo fractional derivative in Atangana2020 . To obtain our predictor formula, let us go back to (21) and use the predictor notation yP(t), which yields

The function f(s,y(s)) can be approximated over each sub-interval [ti,ti+1] using a delayed version of the Newton’s polynomial seen earlier in (23) and given by

Substituting the interpolated approximation of f(s,y(s)) into (36) yields the predictor

We can calculate the integrals as

In each iteration, the predictor (44) is calculated and then corrected by means of the implicit formula

In this section, we will follow the same steps to derive a predictor-corrector numertical scheme for the Caputo-Fabrizio fractional initial-value problem

where the fractional order α∈(0,1) and f is a nonlinear smooth function chosen such that system (46) admits a unique solution y(t). Similar to the previous section, we start with the difference formula