The weak Galerkin (WG) finite element method is an effective and flexible general numerical technique for solving partial differential equations. It is a natural extension of the classic conforming finite element method for discontinuous approximations, which maintains simple finite element formulation. Stabilizer free weak Galerkin methods further simplify the WG methods and reduce computational complexity. This paper explores the possibility of optimal combination of polynomial spaces that minimize the number of unknowns in the stabilizer free WG schemes without compromising the accuracy of the numerical approximation. A new stabilizer free weak Galerkin finite element method is proposed and analyzed with polynomial degree reduction. To achieve such a goal, a new definition of weak gradient is introduced. Error estimates of optimal order are established for the corresponding WG approximations in both a discrete H^1 norm and the standard L^2 norm. The numerical examples are tested on various meshes and confirm the theory. 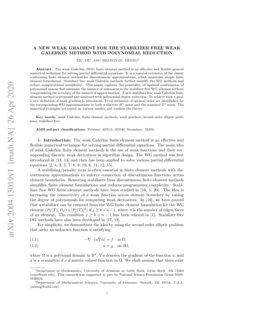 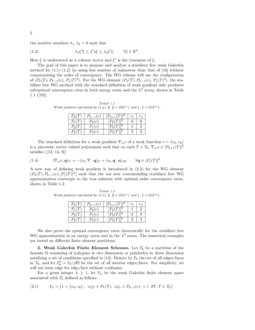 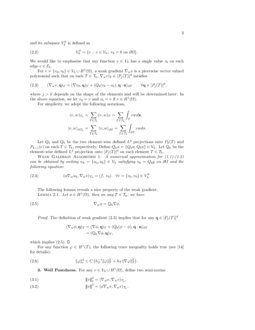 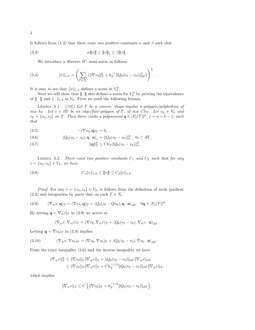 The weak Galerkin finite element method is an effective and flexible numerical technique for solving partial differential equations. The main idea of weak Galerkin finite element methods is the use of weak functions and their corresponding discrete weak derivatives in algorithm design. The WG method was first introduced in [13, 14] and then has been applied to solve various partial differential equations [2, 4, 3, 5, 7, 8, 9, 10, 6, 11, 12, 15].

For simplicity, we demonstrate the idea by using the second order elliptic problem that seeks an unknown function u satisfying

where Ω is a polytopal domain in Rd, ∇u denotes the gradient of the function u, and a is a symmetric d×d matrix-valued function in Ω. We shall assume that there exist two positive numbers λ1,λ2>0 such that

is understood as a column vector and

ξt is the transpose of ξ.

The goal of this paper is to propose and analyze a stabilizer free weak Galerkin method for (1.1)-(1.2) by using less number of unknowns than that of [16] without compromising the order of convergence. The WG scheme will use the configuration of (Pk(T),Pk−1(e), Pj(T)d). For the WG element (Pk(T),Pk−1(e), Pj(T)d), the stabilizer free WG method with the standard definition of weak gradient only produces suboptimal convergence rates in both energy norm and the L2 norm, shown in Table 1.1 ([19]).

A new way of defining weak gradient is introduced in (2.3) for the WG element (Pk(T),Pk−1(e),[Pj(T)]2) such that the our new corresponding stabilizer free WG approximation converges to the true solution with optimal order convergence rates, shown in Table 1.2.

We also prove the optimal convergence rates theoretically for the stabilizer free WG approximation in an energy norm and in the L2 norm. The numerical examples are tested on different finite element partitions.

Let Th be a partition of the domain Ω consisting of polygons in two dimension or polyhedra in three dimension satisfying a set of conditions specified in [14]. Denote by Eh the set of all edges/faces in Th, and let E0h=Eh∖∂Ω be the set of all interior edges/faces. For simplicity, we will use term edge for edge/face without confusion.

For a given integer k≥1, let Vh be the weak Galerkin finite element space associated with Th defined as follows

and its subspace V0h is defined as

We would like to emphasize that any function v∈Vh has a single value vb on each edge e∈Eh.

where j>k depends on the shape of the elements and will be determined later. In the above equation, we let v0=v and vb=v if v∈H1(Ω).

A numerical approximation for (1.1)-(1.2) can be obtained by seeking uh={u0,ub}∈Vh satisfying ub=Qbg on ∂Ω and the following equation:

The following lemma reveals a nice property of the weak gradient. Let ϕ∈H1(Ω), then on any T∈Th, we have

The definition of weak gradient (2.3) implies that for any q∈[Pj(T)]d

For any function φ∈H1(T), the following trace inequality holds true (see [14] for details):

It follows from (1.3) that there exist two positive constants α and β such that

We introduce a discrete H1 semi-norm as follows:

It is easy to see that ∥v∥1,h defines a norm in V0h.

There exist two positive constants C1 and C2 such that for any v={v0,vb}∈Vh, we have

For any v={v0,vb}∈Vh, it follows from the definition of weak gradient (2.3) and integration by parts that on each T∈Th

It follows from Cauchy-Schwarz inequality and (3.13) that

Combining the above estimate and (3.15), we prove the lower bound of (3.8) and complete the proof of the lemma.

The weak Galerkin finite element scheme (2.4) has a unique solution.

Then by letting v=εh in the above equation and (3.3), we arrive at

The goal of this section is to establish error estimates for the weak Galerkin finite element solution uh arising from (2.4

). For simplicity of analysis, we assume that the coefficient tensor

a in (1.1) is a piecewise constant matrix with respect to the finite element partition Th. The result can be extended to variable tensors without any difficulty, provided that the tensor a is piecewise sufficiently smooth.

Let eh=u−uh and ϵh=Qhu−uh∈Vh. In this section, we derive an error equation that eh satisfies.

For any v∈V0h, the following error equation holds true

This completes the proof of the lemma.

Optimal convergence rate of the WG approximation in energy norm will be obtained in this section. First we will bound the two terms e1(u,v) and e2(u,v) in the error equation (4.1).

Let Qk−1 be the element-wise defined L2 projection onto [Pk−1(T)]d on each T∈Th. Using the Cauchy-Schwarz inequality, the trace inequality (2.6), (1.3) and the inverse inequality, we have

We have proved the lemma.

Letting q=∇w(u−Qhu) in the above equation and taking summation over T, we have

We have proved the lemma.

Let uh∈Vh be the weak Galerkin finite element solution of (2.4). Assume the exact solution u∈Hk+1(Ω). Then, there exists a constant C such that

It is straightforward to obtain

Assume that the following H2-regularity holds

Let uh∈Vh be the weak Galerkin finite element solution of (2.4). Assume that the exact solution u∈Hk+1(Ω) and (4.16) holds true. Then, there exists a constant C such that