This paper deals with testing for nondegenerate normality of a d-variate random vector X based on a random sample X_1,...,X_n of X. The rationale of the test is that the characteristic function ψ(t) = (-t^2/2) of the standard normal distribution in R^d is the only solution of the partial differential equation Δ f(t) = (t^2-d)f(t), t ∈R^d, subject to the condition f(0) = 1. By contrast with a recent approach that bases a test for multivariate normality on the difference Δψ_n(t)-(t^2-d)ψ(t), where ψ_n(t) is the empirical characteristic function of suitably scaled residuals of X_1,...,X_n, we consider a weighted L^2-statistic that employs Δψ_n(t)-(t^2-d)ψ_n(t). We derive asymptotic properties of the test under the null hypothesis and alternatives. The test is affine invariant and consistent against general alternatives, and it exhibits high power when compared with prominent competitors. 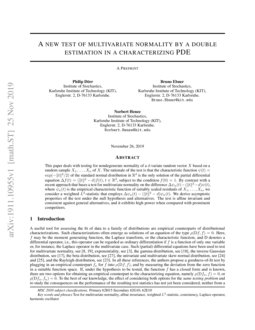 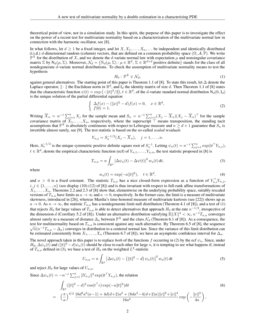 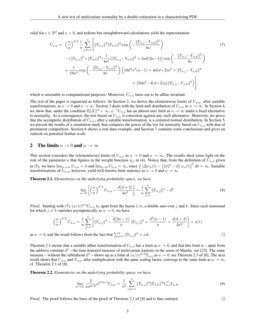 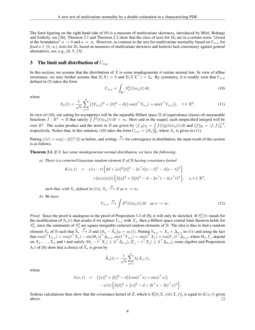 may be the moment generating function, the Laplace transform, or the characteristic function, and D denotes a differential operator, i.e., this operator can be regarded as ordinary differentiation if

f is a function of only one variable or, for instance, the Laplace operator in the multivariate case. Such (partial) differential equations have been used to test for multivariate normality, see [DEH:2019, HV:2019], exponentiality, see [BH:1991]

[M:2010] and [MH:2010], and the Rayleigh distribution, see [MI:2003]. In all these references, the authors propose a goodness-of-fit test by plugging in an empirical counterpart fn for f into ρ(Df,f), and by measuring the deviation from the zero function in a suitable function space. If, under the hypothesis to be tested, the function f has a closed form and is known, there are two options for obtaining an empirical counterpart to the characterizing equation, namely ρ(Dfn,f)=0, or ρ(Dfn,fn)=0. To the best of our knowledge, the effect of considering both options for the same testing problem

and to study the consequences on the performance of the resulting test statistics has not yet been considered, neither from a theoretical point of view, nor in a simulation study. In this spirit, the purpose of this paper is to investigate the effect on the power of a recent test for multivariate normality based on a characterization of the multivariate normal law in connection with the harmonic oscillator, see

In what follows, let d≥1 be a fixed integer, and let X,X1,…,Xn,… be independent and identically distributed (i.i.d.) d

-dimensional random (column) vectors, that are defined on a common probability space

(Ω,A,P). We write PX for the distribution of X, and we denote the d-variate normal law with expectation μ and nonsingular covariance matrix Σ by Nd(μ,Σ). Moreover, Nd={Nd(μ,Σ):μ∈Rd,Σ∈Rd×dpositive definite} stands for the class of all nondegenerate d-variate normal distributions. To check the assumption of multivariate normality means to test the hypothesis

against general alternatives. The starting point of this paper is Theorem 1.1 of [DEH:2019]. To state this result, let Δ denote the Laplace operator, ∥⋅∥ the Euclidean norm in Rd, and Id

the identity matrix of size

d. Then Theorem 1.1 of [DEH:2019] states that the characteristic function ψ(t)=exp(−∥t∥2/2), t∈Rd, of the d-variate standard normal distribution Nd(0,Id) is the unique solution of the partial differential equation

Writing ¯¯¯¯¯Xn=n−1∑nj=1Xj for the sample mean and Sn=n−1∑nj=1(Xj−¯¯¯¯¯Xn)(Xj−¯¯¯¯¯Xn)⊤ for the sample covariance matrix of X1,…,Xn, respectively, where the superscript ⊤ means transposition, the standing tacit assumptions that PX is absolutely continuous with respect to Lebesgue measure and n≥d+1 guarantee that Sn is invertible almost surely, see [EP:1973]. The test statistic is based on the so-called scaled residuals

and a>0 is a fixed constant. The statistic Tn,a has a nice closed-form expression as a function of Y⊤n,iYn,j, i,j∈{1,…,n} (see display (10)-(12) of [DEH:2019]) and is thus invariant with respect to full-rank affine transformations of X1,…,Xn. Theorems 2.2 and 2.3 of [DEH:2019] show that, elementwise on the underlying probability space, suitably rescaled versions of Tn,a have limits as a→∞ and a→0, respectively. In the former case, the limit is a measure of multivariate skewness, introduced in [MRS:1993]

converges in distribution to a centered normal law. Since the variance of this limit distribution can be estimated consistently from

), we have an asymptotic confidence interval for

The novel approach taken in this paper is to replace both of the functions f occurring in (2) by the ecf ψn. Since, under H0, Δψn(t) and (∥t∥2−d)ψn(t) should be close to each other for large n, it is tempting to see what happens if, instead of Tn,a defined in (3), we base a test of H0 on the weighted L2-statistic

and reject H0 for large values of Un,a.

valid for c∈Rd and a>0, and tedious but straightforward calculations yield the representation

which is amenable to computational purposes. Moreover, Un,a turns out to be affine invariant.

The rest of the paper is organized as follows. In Section 2, we derive the elementwise limits of Un,a, after suitable transformations, as a→0 and a→∞. Section 3 deals with the limit null distribution of Un,a as n→∞. In Section 4, we show that, under the condition E∥X∥4<∞, n−1Un,a has an almost sure limit as n→∞ under a fixed alternative to normality. As a consequence, the test based on Un,a is consistent against any such alternative. Moreover, we prove that the asymptotic distribution of Un,a, after a suitable transformation, is a centered normal distribution. In Section 5, we present the results of a simulation study that compares the power of the test for normality based on Un,a with that of prominent competitors. Section 6 shows a real data example, and Section 7 contains some conclusions and gives an outlook on potential further work.

This section considers the (elementwise) limits of Un,a as a→0 and a→∞. The results shed some light on the role of the parameter a that figures in the weight function wa in (4). Notice that, from the definition of Un,a given in (5), we have lima→∞Un,a=0 and lima→0Un,a=∞, since ∫∣∣Δψn(t)−(∥t∥2−d)ψn(t)∣∣2dt=∞. Suitable transformations of Un,a, however, yield well-known limit statistics as a→0 and a→∞.

Elementwise on the underlying probability space, we have

Starting with (7), (a/π)d/2Un,a is, apart from the factor 1/n, a double sum over j and k. Since each summand for which j≠k vanishes asymptotically as a→0, we have

as a→0, and the result follows from the fact that ∑nj=1∥Yn,j∥2=nd. ∎

Theorem 2.1 means that a suitable affine transformation of Un,a has a limit as a→0, and that this limit is – apart from the additive constant d2 – the time-honored measure of multivariate kurtosis in the sense of Mardia, see [MAR:1970]. The same measure – without the subtrahend d2 – shows up as a limit of (a/π)d/2Tn,a as a→0, see Theorem 2.3 of [DEH:2019]. The next result shows that Un,a and Tn,a, after multiplication with the same scaling factor, converge to the same limit as a→∞, cf. Theorem 2.1 of [DEH:2019].

Elementwise on the underlying probability space, we have

The limit figuring on the right hand side of (9) is a measure of multivariate skewness, introduced by Móri, Rohatgi and Székely, see [MRS:1993]. Theorem 2.1 and Theorem 2.2 show that the class of tests for H0 are in a certain sense "closed at the boundaries" a→0 and a→∞. However, in contrast to the test for multivariate normality based on Un,a for fixed a∈(0,∞), tests for H0 based on measures of multivariate skewness and kurtosis lack consistency against general alternatives, see, e.g., [BHE:1991, BH:1992, HEN:1994a].

3 The limit null distribution of Un,a

In this section, we assume that the distribution of X is some nondegenerate d-variate normal law. In view of affine invariance, we may further assume that E(X)=0 and E(XX⊤)=Id. By symmetry, it is readily seen that Un,a defined in (5) takes the form

In view of (10), our setting for asymptotics will be the separable Hilbert space H of (equivalence classes of) measurable functions f:Rd→R that satisfy ∫f2(t)wa(t)dt<∞. Here and in the sequel, each unspecified integral will be over Rd. The scalar product and the norm in H are given by ⟨f,g⟩H=∫f(t)g(t)wa(t)dt and ∥f∥H=⟨f,f⟩1/2H, respectively. Notice that, in this notation, (10) takes the form Un,a=∥Sn∥2H, where Sn is given in (11).

Putting ψ(t)=exp(−∥t∥2/2) as before, and writing D⟶ for convergence in distribution, the main result of this section is as follows.

If X has some nondegenerate normal distribution, we have the following:

Since the proof is analogous to the proof of Proposition 3.2 of [DEH:2019], it will only be sketched. If S0n(t) stands for the modification of Sn(t) that results if we replace Yn,j with Xj

, then a Hilbert space central limit theorem holds for

Tedious calculations then show that the covariance kernel of S, which is E[h(X,s)h(X,t)], is equal to K(s,t) given above. ∎

denote a random variable having the limit distribution of

Un,a given in (12). Since the distribution of U∞,a is that of ∥S∥2H, where S is the Gaussian random element of H figuring in Theorem 3.1, it is the distribution of ∑j≥1λjN2j, where N1,N2,… is a sequence of i.i.d. standard normal random variables, and λ1,λ2,…

f↦Af on H, where (Af)(s)=∫K(s,t)f(t)wa(t)dt. It seems to be hopeless to obtain closed-form expressions of these eigenvalues. However, in view of Fubini’s theorem, we have

and thus straightforward manipulations of integrals yield the following result.

From this result, one readily obtains

It is interesting to compare this limit relation with (8). If the underlying distribution is standard normal, i.e., if PX=Nd(0,Id), we have E∥X∥4=2d+d2. Now, writing Yn,j=Xj+Δn,j and using Proposition A.1 of [DEH:2019], the right hand side of (8) turns out to converge in probability to E∥X∥4−d2 as n→∞, and this expectation is the right hand side of (13). Regarding the case a→∞, the representation of E[U∞,a] easily yields

is a random variable having a chi square distribution with

4 Limits of Un,a under alternatives

In this section we assume that X,X1,X2,… are i.i.d., and that E∥X∥4<∞. Moreover, let E(X)=0 and E(XX⊤)=Id in view of affine invariance, and recall the Laplace operator Δ from Section 1. The characteristic function of X will be denoted by ψ(t)=E[exp(it⊤X)], t∈Rd. Letting

we first present an almost sure limit for n−1Un,a.

the strong law of large numbers in Hilbert spaces (see, e.g., Theorem 7.7.2 of

The squared norm in H of the second summand on the right hand side converges to zero almost surely, see the treatment of Un,1 in the proof of Theorem 6.1 of [DEH:2019]. The same holds for the first summand, since its modulus is bounded from above by 4∥t∥n−1∑nj=1∥Δj∥+2n−1∑nj=1∥Δj∥2, and the inequality n−1∑nj=1∥Δj∥≤(n−1∑nj=1∥Δj∥2)1/2, together with Proposition A.1 b) of [DEH:2019], yield the assertion. ∎

Since, under the conditions of Theorem 4.1, Γa is strictly positive if the underlying distribution does not belong to Nd, Un,a converges almost surely to ∞ under such an alternative, and we have the following result.

The test which reject the hypothesis H0 for large values of Un,a is consistent against each fixed alternative satisfying E∥X∥4<∞.

The next result, which corresponds to Theorem 6.4 of [DEH:2019], shows that the (population) measure of multivariate skewness in the sense of Móri, Rohatgi and Székely emerges as the limit of Γa, after a suitable scaling, as a→∞.

Under the condition E∥X∥6<∞, we have

In what follows, let Y,Z be independent copies of X. Since ψ+(t)2=E[CS+(t⊤Y)CS+(t⊤Z)], the addition theorems for the cosine and the sine function and symmetry yield

and the assertion follows. ∎

We close this section with a result on the asymptotic normality of Un,a under fixed alternatives. That such a result holds in principle follows from Theorem 1 of [BEH:2017]. To state the main idea, write again CS±(ξ)=cos(ξ)±sin(ξ) and notice that, by (10), Un,a=∥Sn∥2H, where Sn(t) is given in (11). Putting

where V∗n(t)=√n(S∗n(t)−z(t)), t∈Rd. In the sequel, let ∇(f)(t) denote the gradient of a differentiable function f:Rd→R, evaluated at t, and write Hf(t) for the Hessian matrix of f at t if f is twice continuously differentiable. By proceeding as in the proof of Theorem 3.3 of [DEH:2019], there is a centered Gaussian element V∗ of H having covariance kernel